What Causes Road Rage And How To Avoid It

A casual glance at the news is all it takes to see that road rage, as a problem, seems to be increasing on an almost daily basis. A quick google search brings up incidents from across the UK and abroad, often within hours of the search - and there’s a good reason for that. Road rage doesn’t just affect drivers. Pedestrians, cyclists, and others are all susceptible to it. Just about everyone who uses the road has a tale to tell about either losing their temper or having to deal with someone who has lost theirs.

With the consequences for a road rage incident being so potentially high, it’s important to try and avoid it, both mentally and physically. A person on the road shouting and swearing is an annoyance. A person shouting and swearing while behind the wheel travelling at relatively high speeds is a danger. So, how can you avoid road rage? Well, a few simple tips can help you manage when you feel the urge to start raging.

1) Learn To Recognise The Signs

This might seem like slightly silly advice, but like most advice like this, it comes from a place of truth. Every person is different, but there are certain signs that are shared whenever we begin to get angry. If you’ve realised that road rage is a problem for you, then learning to recognise the signs is the best way to avert a crisis.

When we’re stressed, we begin to breathe quickly because our body is trying to take in oxygen – either for a fight or to run away. The same happens when road rage hits; we get a burst of adrenaline and our body starts preparing to take action. The biggest difference from other situations is, of course, that you’re behind the wheel of a car, and already distracted from the messages your body and brain are sending you!

No one likes being shouted or sworn at. It’s one of those things that’s guaranteed to rub you up the wrong way, especially if it’s a complete stranger who has decided to take the sting out of their bad day by making yours a little worse. Now, it’s very hard to let go of the anger when someone is shouting four-letter words at you from their car, but the simplest way to deal with them is to just shrug it off and drive away. Ultimately, they won’t do much more than throw harsh language at you in most cases, except for extremely rare events.

Even if someone does try to make an altercation physical, the best thing to do is simply drive away. The likelihood is that they’ll stand there for a moment, realise they’ve made a fool of themselves, and head back to their car. The important thing is to never escalate a situation. If you’re angry and confront someone else who is angry, you’re putting yourself and anyone else with you at risk. Stay in your car, take a deep breath, and drive away. 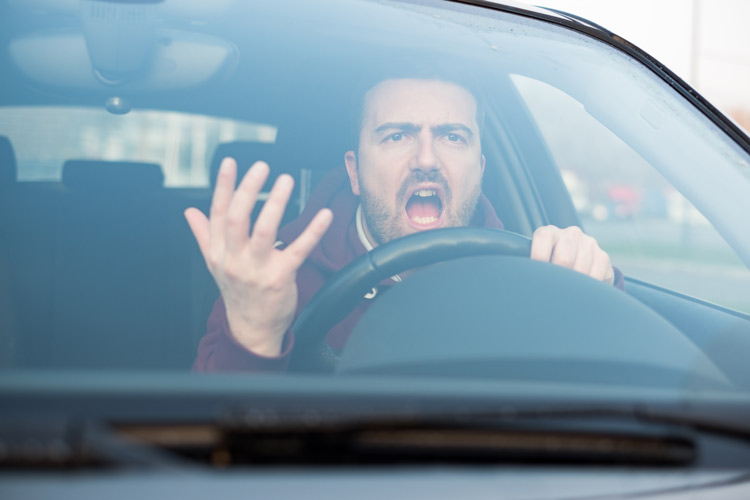 3) Don’t Be Afraid To Pull Over

Road rage, in many cases, is a manifestation of our old friend, the fight or flight response. Usually, it’s triggered by another drivers’ actions – someone cuts you off or acts aggressively towards you, and puts you in a position where you feel out of control. Road rage is a response where you are trying to regain that control, and your body feels that you need to respond with aggression. And that’s where the problems start. Letting that aggression get out of control is what leads to normally sensible people having a bout of road rage, and when it happens to you, you’re liable to put yourself and others in danger.

It’s fairly easy to recognise the signs of road rage in ourselves – it feels mostly like any other time we get angry. The problem is that anger leads to irrational actions and being behind the wheel of a car is no place to be irrational. Even if you feel in control of the anger, you will be doing things without realising that you’re even doing them. When you feel that anger bubbling away, get to a safe place and pull over for a few minutes. Take the time to have a few deep breaths, a sip of water, and a moment of calm before you get back on the road – it will make all the difference.

You’ll recall how, earlier, we said that it’s important never to escalate a situation. No matter how angry you are, the worst thing you can possibly do is take an action that will make the situation harder to get out of. And of all the things you can do, getting out of the car is possibly one of the worst. The instant you leave the vehicle, you’re inviting whoever you’re angry at to do the same, and if both of you are angry then the likelihood of a confrontation turning physical is increased. Similarly, if you’re calm, but the person you’ve stopped to confront is angry, then stepping out of the car is likely to increase their aggression as they believe you’re rising to meet them.

The best thing you can do is stay in your car. If you feel threatened, lock the doors. If you feel angry, keep the doors closed. Remember, even if someone is being aggressive, no fleshy human ever won a fistfight with a metal car. By staying in the car, you’re defusing the situation for both you and the person you’re angry with. You should also be ready to report an incident. If someone is threatening towards you, either verbally or physically, call the police.

5) Take The Time To Calm Down

If you’re in a road rage incident, whether you’re the one raging or you’re being raged at, it can be a harrowing experience. Even if no physical confrontation has taken place, it can still be upsetting to have had a clash with a complete stranger, or, once we’ve calmed down, to realise that we were shouting at another person who probably wanted to get on with their day.

All in all, it doesn’t hurt to take a few moments to settle down. Take a deep breath, and either calm your nerves or reduce your anger. Taking a moment to calm before you get out of the car will go a long way to settling you down in either case. Road rage is always a difficult subject to tackle, and ultimately there is no foolproof guide to how to deal with it. Like many other things in life, it’s a case of listening to what the situation is telling us and remembering one simple adage: if you have the choice, don’t drive angry.

Luckily, many new cars have features such as lane assist systems and autopilot which reduce the risk of road rage due to assisting motorists if they’re heading towards a nightmare on the road. Visit our car leasing deals page to pick out your new car to help avoid your next bout of road rage!