Why Lease the DS DS 3 Hatchback? 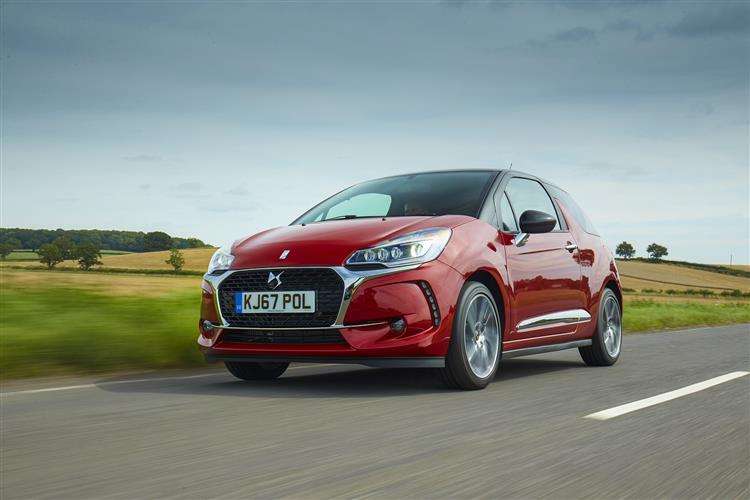 The DS3 supermini has proved to be a popular succss story over recent years for customers in seatrch of an affordable, sporty and well-finished three-door hatch. It's now a key model for the newly-created DS brand that Citroen has created - and has been regularly improved in recent times with more efficient Euro6-compliant engines, smart new lights on selected versions and some extra hi-tech equipment options. Otherwise, the recipe is much as before, with a three-door-only range of hard-top or Cabrio models, striking practical design both inside and out, a range of proven engines and a huge variety of personalisation options.

This DS3 is a trendy small car in the MINI or Fiat 500 mould. Nothing especially ground-breaking about that, you might think - but stop and consider for a moment. Before this car arrived, established thinking suggested that a fashionable little urban trinket of this kind had to have a 'retro' look, with style harking back to an older classic model: all very nice but also pretty cramped when it came to carrying people and packages. So the DS3 turned that thinking on its head, completely new and practical but also instantly iconic. Other brands have tried the same thing but few have done so with the success hat's been delivered here. In recet times, the formula has been subtly improved. Let's check it out.

So what's it like to drive? Well, you get in and settle into a sculpted seat that's set sporty and low. Ahead of you, the compact steering wheel feels just right and all the vital dials are set in a deeply-cowled, chrome-edged triple pod. Turn the key and both speedo and rev counter zip around their dials and return to zero. You're ready to go. On the move, it's hard to believe that all the underpinnings of this car are basically borrowed from a conventional Citroen C3 supermini. The lower body and stiffer suspension set-up give this model a very different feel, as does the precisely-weighted electric power steering, offering assistance when you need it and plenty of road feel when you don't. The damping also offers the best of both worlds, making you aware of bumpy surfaces, but spiriting away the aftershock you could do without. It makes a MINI feel about as subtly sprung as a go-kart. Only the rather long-throw gearchange could be slicker. Under the bonnet of mainstream hard-top and Cabrio models, petrol people get the choice of an entry-level 82bhp and 110bhp petrol 'PureTech' 1.2-litre units or various forms of 1.6-litre power, either a 120bhp VTi model or the THP 165 turbocharged unit. That version makes sixty two from rest in just 7.5s on the way to 135mph, so it's as quick as a pricier MINI Cooper S. The major change though, is in the diesel range where more modern 'BlueHDi' 100 and 120bhp units are offered for the first time.

To the uninitiated, the DS3 is still quite a sight. The basic shape of the car is traditional supermini with gentle curves marking its extremities and the wheels pushed out to the corners producing a squat, purposeful stance. The real drama, however, is in the detail. From that 'shark fin' B-pillar and the contrasting roof panel to the vertical strips of LED running lights that flank the front grille and the distinct sill line connecting the wheelarches, the DS3 is ferociously unconventional. It has the look of a concept car but this French brand has built it and you can buy it. With this updated version, buyers of D Sport variants get even trendier LED Xenon headlamps with smart sequential indicators and greater efficiency. For a modern supermini, the DS3 is relatively compact. It's 3950mm long and 1710mm wide, which is similar to the Ford Fiesta, but the designers have worked hard to maintain plenty of interior space. The manufacturer claims there's room for five adults with legroom in the rear enhanced by the slender backs of the driver and front passenger seats. In the tail, the boot of the hard-top version is 285-litres which is large for the supermini class and 60:40 split rear seats give options for extending that capacity. The Cabrio version of course has less space to offer - 245-litres - but that's not bad for a car of this kind. This variant isn't a full convertible: instead, buyers get a concertina-ing fabric top that leaves the sides of the car in place.

Prices start at just under £13,500 but there's a premium of just over £2,500 to pay if you want the desirable Cabrio version. The DS brand is is keen to emphasis the amount of technology it has squeezed into the DS3. DSign, DStyle and DSport are the main trim levels and the options list includes items such as cruise control with a speed limiter, a classy MP3-compatible stereo system with a sub woofer in the boot and the MyWay satellite navigation system. Safety equipment includes ESP stability control as standard an advanced ABS braking system and six airbags. Personalisation is a term that is cropping up with increasing regularity when we talk about trendy small cars and this revised DS3 further embraces it with things like a laser-etched dashboard strip and a screen-printed rear window. There are wider colour and wheel options too. As before, the roof, the mirrors, the dashboard, the rubbing strips and the wheels all come in various colours and whichever bodywork colour you choose, you get a matching key fob. Safety-wise, buyers also now get the chance to specify the clever 'Active City Brake' system. Here, a radar scans the road ahead at low speeds as you drive. If a potential collision hazard is detected, you'll be warned. If you don't respond - or aren't able to - the car with automatically brake to reduce the severity of any resulting accident.

The revised DS3 models get new Euro 6 compliant diesel and petrol engines. Diesel drivers now get the choice of BlueHDi 120 and BlueHDi 100 units, both engines offering more power and lower emissions. Thanks to the use of leading-edge technology, including SCR (Selective Catalytic Reduction), NOx emissions are cut by 90%, while CO2aemissions are cut by up to 4%. The BlueHDi 100 variant is class-leading in terms of emissions, producing just 79g/km of CO2. The BlueHDi 120 emits 94g/km of CO2. As well as reducing emissions and delivering greater levels of performance, both engines improve fuel efficiency, boasting figures of up to 94mpg for the BlueHDi 100 and up to 78mpg for the BlueHDi 120 version. The French brand has also developed a Euro 6-compliant entry-level petrol unit, the 'PureTech e-VTi 82 ETG'. Delivering 69mpg over a combined cycle and producing just 95g/km of CO2, this engine comes only with the automated manual ETG (Efficient Tronic Gearbox). The 5-speed 'box features a creep function and optimised software mapping, which adjusts power delivery for smoother starts and a better driving experience.

The DS3 embodies everything that's good about its brand. Full of original ideas and delightful details, it's a design icon for the modern world. The sporty looks are backed up by an involving drive and, best of all, it's a car you don't have to shed the family to enjoy. It's very individual, very chic and very fashionable: a car of its time.