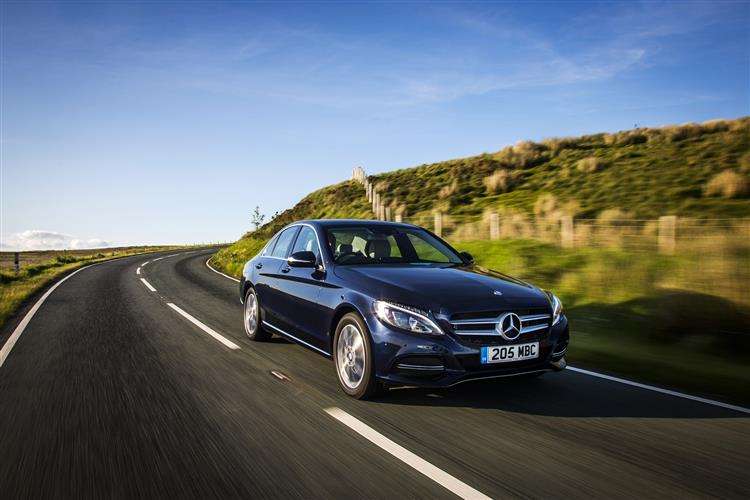 The C63 gets a new badge and an entirely different engine. Andy Enright presides over some monumental changes to an old favourite.

With great power comes great responsibility. Or at least it does now that the Mercedes-AMG C63 is fitted with a 4.0-litre V8 that gets better fuel figures while still wielding the big stick. Choose from the 476PS C63 or the 510PS C63 S in either saloon or estate body styles and enjoy responsibly.

Can we just have a moment of solemn remembrance for the Mercedes M156 engine? This 6208cc V8 started out great and just got better with age. Alas, emissions regulations are no respecters of reputation and Mercedes has teamed up with its go-faster arm to develop something more in keeping with today's requirements. You might well have also noticed that this C63 isn't badged a 'Mercedes-Benz'. Instead it now wears the 'Mercedes-AMG' moniker to signify the increased involvement the AMG team at Affalterbach have had in developing this model. Clearly the biggest change comes under the bonnet where that charismatic 6.2-litre lump has been replaced by a smaller 4.0-litre V8 that's boosted by a pair of turbochargers, but there are significant upgrades throughout this model. The name change is apt. The C63 might have ditched its party piece but be in no doubt, it's moved onwards and upwards.

You might have seen a version of this engine doing the rounds in the Mercedes-AMG GT coupe. If not, here are the cliff notes. The 'M177' powerplant displaces 3,982 cc and is equipped with twin turbochargers cleverly packaged in the 'V' of the cylinder banks and cooled via a special duct built in the bonnet of the car. The engine's good for 476PS in the standard 63 and 510PS in the even hotter C63 S model. You won't need reminding that it's a good deal more efficient. You want to know whether it's any quicker. The news is all good on that front, the C63 S accelerating to 62 mph in 4.0 seconds, with the estate version a tenth slower. The standard C63 is no sluggard either, adding a tenth to those previous times. Whichever model you choose, it's electronically limited to 155mph. The changes don't stop there. A heavily revised version of the AMG Speedshift 7-speed transmission now features significantly quicker shift times. There are dynamic engine mounts and a revised suspension setup; four-link at the front and a multilink rear with a wider track. Both ends are linked to the AMG Ride Control system, operating through electronically-controlled three-stage dampers. There's a mechanical locking rear differential on the C63, with an electronic version for the C63 S. The braking system uses 390mm discs at the front and 360mm rotors at the back, with the option of ceramic discs for circuit bashers.

The C63 models have always majored on understated muscularity and this latest version is no different. You won't find huge spoilers or box-arches. Instead, it's about teasing the bodywork out to hint at a car that's spent some serious time in the gym. Front bumpers with deep air dams feed the intercoolers and there's an AMG-specific grille that frames a bonnet equipped with subtle power domes. The front wings are slightly wider and there are subtle 'V8 biturbo' badges above a set of similarly discreet sill extensions. The rear bumper is also different, designed to house the quad exhaust pipes. There's a small bootlid spoiler on the saloon and a low-key item on the tailgate glass of the estate version. The C63 gets contoured seats set behind a wieldy AMG wheel and recalibrated AMG dials. Even more focused AMG Performance seats can be specified along with a range of different leather treatments and trim finishes - from piano black to carbon and aluminium. The buttons for the AMG Ride Control, the optional active AMG performance exhaust system and the three-stage gearbox modes are grouped around the standard Touchpad controller, above which is an AMG badge and surprisingly non-tacky IWC-branded analogue clock.

Prices start at around £60,000 for the C63 saloon, with the estate version offered at a premium of £1,320 over its four-door stablemate. There's a premium of nearly £7,000 to pay if you want one of the C63 S models. You probably don't need us to break the news that this is quite serious money but it's about the same amount as you'd pay for a rival Audi RS4 Avant - or a BMW M3 saloon with an auto gearbox. You're also getting more power with the C63 too remember and you certainly get a beautifully finished vehicle with plenty of equipment on board. The C63 features Nappa leather for the seats and the steering wheel, the COMAND infotainment system and a memory package for the seats, plus 18-inch multi spoke wheels. The S version isn't just about more horses and a trick diff either. Customers who sign up to the senior C also get 19-inch alloys and a 'Race' function in the COMAND set-up to allow the driver to alter the gearbox, engine and damping modes according to their preference. A set of AMG Performance Seats are teamed with grey belts. Should you want to go further, you could also specify a powerful Burmester surround sound system or, for those wanting a soundtrack straight from Affalterbach, the option of a variable AMG exhaust. There's also the incredible LED Intelligent Light System to consider.

This isn't the point where we tell you how reasonable a 500PS Mercedes is to run. Should you exercise your right boot liberally, running costs will still rank as ruinous to 99 per cent of UK wage earners, but exercise a little more restraint and the efficiency gains of this 4.0-litre engine can be brought to bear. Mercedes-AMG quote a combined fuel economy figure of 34.5mpg for the saloon and 33.6mpg for the estate, regardless of whether you choose the standard power output or the uprated S model. These economy figures equate to 192g/km of carbon dioxide emissions for saloon and 196g/km for the estate. Those numbers really aren't that bad. Well, they aren't bad in comparison to other 500PS vehicles. If you're old enough to remember the days when a car that could get better than 30mpg was deemed economical, they're quite remarkable. Residual values ought to hold up well on the back of them and the fact that this is no facelift of an ageing model. Insurance is likely to require a bit of specialist help from a diligent broker.

You buy a BMW M3 for handling purity, you buy an Audi RS4 for all-wheel drive instant go and you buy a Mercedes C63 for its utterly seductive combination of sleek looks and old-school muscle car feel. Of course, bringing the brawn was a speciality of the old 6.2-litre V8. In contrast, this replacement 4.0-litre unit might punch even harder but buyers will need to warm to a different feel. We think that AMG has this one covered though. The C63 has evolved into something that's subtler than before and this more cerebral approach is one that'll play well to a very well-informed customer profile. They'll know all about the residual values, the efficiency gains, the clever engine mounts and slicker suspension. They'll appreciate the quality gains of the interior and will have the wit to compare and contrast the value proposition versus Audi and BMW. Mercedes-AMG have crunched the numbers already. Which is why they're looking pretty smug about the C63's chances.