Why Lease the Toyota Supra? 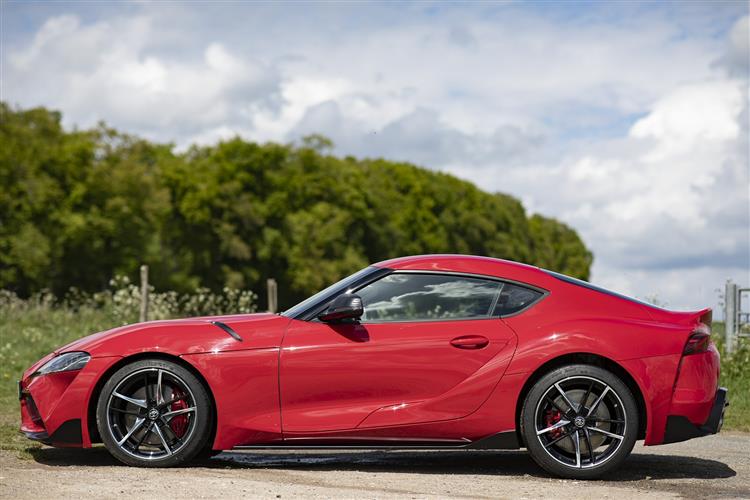 'The legend returns': that's the advertising tagline Toyota's opted for with this model, its GR Supra sports car. Is the Supra model line legendary? It certainly has a colourful history that was worth resuming, but the way that Toyota has done so here was not without controversy. It's certainly produced a fascinating end result though - as we'll see in this test.

Once upon a time, the Toyota Supra was seen as a classic Japanese sports car, that position cemented by the MK4 model's starring role in the very first 'Fast & Furious' film and a prominent place in the original version of Sony's 'Gran Turismo' PlayStation game. By the turn of the century though, as Toyota's attention became consumed with hybrids and SUVs, the Supra was forgotten, the buyers that had once loved it drifting away to other brands when production ended in 2002. And that might have been that, had not BMW found itself in need of a partner to develop the third generation version of its Z4. Which has brought us the car we have here. This is the first Toyota to be produced entirely by the brand's competition division Gazoo racing - hence the 'GR Supra' badging. It's built alongside the Z4 on an Austrian production line in Gaz, but uses only the top engine found in its BMW cousin, a 3.0-litre 335bhp unit that is indeed a turbo straight-six. Chief Engineer Tetsuya Tada describes this as 'a sports car without compromise' which, if true, would certainly be an achievement given the need here to somehow bond a Toyota body shell to Bavarian engineering and produce a purely focused end result. Is that what we've got here? Time to find out.

We've had of course endless media comparisons between this car and its BMW Z4 M40i development cousin. GR Supra Chief Engineer Tetsuya Tada hasn't got much time for any of that, pointing out that all the dynamic elements that really matter - namely the settings used here for suspension, steering and the electronically controlled differential - are all his brand's own, courtesy of an intensive tuning programme from Gazoo Racing, the Toyota competition division given the task of developing this model. 'If you're going to compare the Supra to another car', he says, 'compare it to a Porsche Cayman'. That of course isn't the kind of classic straight-six, front-engined rear-wheel drive sports car this Toyota is trying to be, but this Supra's power output (335bhp) and performance figures (rest to 62mph in 4.3s) are very Cayman-like. The gearbox used here is somewhat different though - an 8-speed ZF torque converter auto - its change times influenced by your choice between 'Normal' or 'Sport' drive mode settings. These also alter steering feel, throttle response and the ride quality you get from the 'Adaptive Variable Suspension'. More electronics feature in the form of an active differential that redirects torque between the rear wheels, firing you from bend to bend. All of this is further aided by ideal 50:50 weight distribution and a particularly stiff chassis. The fairly chunky one and a half-tonne kerb weight is less helpful, which is one of the reasons why you can't chuck this car into a bend with quite the abandon you can with some rivals. But it'd be an easier car to live with day-to-day.

You'd expect a car that's had to borrow so heavily from shared componentry to be something of a compromise design. Yet of all the five Supra generations produced since Toyota unveiled its iconic 2000GT sports car back in 1967, there's little doubt that this one gets closest to replicating the romance of that original model's classic styling. In profile, you can clearly see its key elements; a short wheelbase, large wheels and a wide stance; a taut 2-seat-only cabin; and a long bonnet with a compact body reflecting the purist combination of an in-line six cylinder engine and rear-wheel drive. It's certainly extreme; the voluptuous rear haunches; the double-bubble roof line that delivers this unusual upper silhouette; and these curious slashes in the front wings that seem to serve no purpose we can discern, aesthetic or practical. You certainly can't accuse this car of being under-styled. Toyota claims the cabin design's been influenced by the cockpits you get in single-seater racing cars, which is why some might find the high waistline and low driving position a touch claustrophobic. What Supra fans with wider brand experience might not like so much is the vast amount of shared BMW componentry on show here, but for the most part, it's been classily integrated and quite a lot about this cabin remains Toyota's own; the great-looking supportive sports seats; the thin-rimmed steering wheel and the bespoke instrument cluster screen you view through it, complete with prominent 3D-effect orange rev counter and white digital speedo. The 8.8-inch fascia-top infotainment screen is BMW's, but that's a good thing as it delivers a level of media connectivity currently beyond most Toyota models. Unlike previous Supra models, this one's not a 2+2, so as with most cars in this segment, there are no tiny pews out back that might be used for small children or designer shopping bags. So just about anything you want to carry needs to go in the boot, the capacity of which is rated at 290-litres.

The GR Supra range is straightforward; this single coupe body style and one 3.0-litre straight-six twin turbo engine that from launch was offered in a single 335bhp state of tune. Pricing might cause a quick intake of breath from those who remember the relative affordability of earlier Supras. From its introduction, this one listed at just under £53,000 in its standard form, but the vast majority of buyers in our market opt to find the extra £1,300 to get the up-spec 'Pro' version we have here. Most of what you'll want features on the standard version, which gets piercing adaptive LED headlamps and lovely 19-inch black & silver 5-double-spoke forged alloy wheels with red brake calipers. Along with an alarm, auto headlamps and wipers, LED tail lights, automatic headlamp levelling, heated auto-dimming mirrors, all-round parking sensors and a rear view camera. Plus there are key driving features like Adaptive Variable Suspension; an Active Sports Differential to help get the power down though the turns; and a 'Drive mode selector with 'Normal' and 'Sport' settings, along with an 'Individual' menu that allows you to customise your own driving preferences. The 8-speed auto gearbox also gets paddle shifters and a launch control function for lightning starts. Inside, there are alcantara-upholstered sports seats with heating, cooled ventilation, power adjustment and a memory function. There's also dual-zone air conditioning, an auto-dimming rear view mirror, a USB port and a 'Smart entry' keyless entry system. There's aluminium finishing for the pedals and the door scuff plates. And infotainment's taken care of by an 8.8-inch centre-dash screen, your access point for a 10-speaker audio system, Navigation, Bluetooth and voice recognition.

We didn't expect too much here. With a kerb weight of around one and a half tonnes, the GR Supra is hardly, after all, the lightest sports car of this kind, around 100kgs of its overall weight taken up by all the emissions and safety legislation introduced since the previous generation model left production. It tips the scales 65kgs (or the weight of a fairly fit passenger) heavier than its arch-rival, the Porsche 718 Cayman - though that's partly of course because there are two extra cylinders fitted up-front. Impressive then, that this Toyota manages to be considerably cleaner and more frugal than its Zuffenhausen rival. The GR Supra records 170g/km of NEDC-rated CO2 and 34.5mpg on the WLTP combined cycle - which should give a reasonable operating range from the 52-litre fuel tank. For reference, the figures for an equivalent 718 Cayman PDK are 193g/km and 31.0mpg. That emissions figure means a 37% Benefit-in-Kind tax rating that really isn't too bad for a powerful sports car of this kind. And it allows this Toyota to just about edge into the 151-to-170g/km tax band, which in turn means that your first year Vehicle Excise duty payment would be £530; on the Porsche, it'd be £1,280. A flat annual VED charge of £145 applies after the first year, along with an additional £320 per year added in years two to six of ownership thanks to the fact that this Toyota costs more than £40,000. Insurance is rated at group 41E.

Is this an 'uncompromised sports car', as Toyota promises? Of course it isn't. No joint-engineering project can ever be quite that. The sort of Supra Chief Engineer Tetsuya Tada and his colleagues would have created from a clean sheet would surely have been different from this 'A90'-series model. But perhaps not so very different. Because the company stuck to its guns on what it wanted from this car, the end result has stayed true to the essential tenants of Supra development. And because of the BMW-shared engineering (which was what made the whole thing viable in the first place), this model could be brought to market before the onset of emission regulations that in future will severely curtail the aural excitement that cars like this can offer. Tada-san sees this as an 'old fashioned sports car' and in many ways it is. There's something timeless about the feel of a classic front-engined sports car with a lightly-loaded driven rear axle that you just don't get from supposedly purer mid-engined models like Porsche's 718 Cayman or the Alpine A110. It's special and memorable and different and fun. Exactly as a Supra should be.