Why Lease the Vauxhall Mokka X? 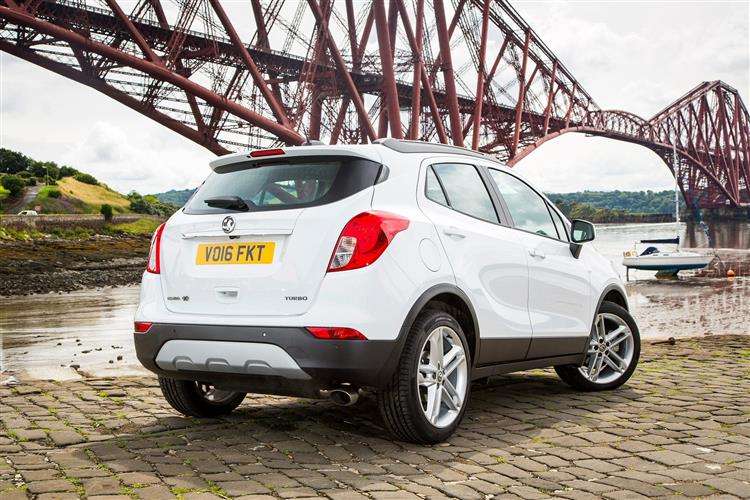 'X' marks the spot with Vauxhall's Mokka compact crossover. It was the first of the brand's SUV/Crossover models to get this new designation, one that in this case signifies smart styling, efficient engines and the inclusion of the innovative 'OnStar' personal connectivity feature across the whole range. Let's check this car out in 1.6-litre CDTi diesel form.

The Mokka has been very good to Vauxhall, notching up more than half a millions sales across Europe, and with almost a quarter of those in the UK. It means this compact crossover has not only been one of the best sellers in its tightly contested sector, it's been a regular in the top ten overall sales chart. So, the revised Mokka X has a lot to live up to in the face of ever-improving rivals. The Mokka X doesn't tamper with those virtues of its predecessor, but it does come with a sleeker look inside and out. As part of this, the dash has been updated quite significantly with a new, larger infotainment touchscreen in all models. Other new technology for this X-rated crossover includes Vauxhall's 'OnStar' personal connectivity and service assistant. Is all that enough to keep it at the head of the class? Let's check out the popular 1.6-litre CDTi diesel version and find out.

This isn't an especially rewarding car to drive - the extra weight and the higher stance of the Crossover genre count against it here - but then if you come to almost any car in this class expecting fun at the wheel, the truth is that you're probably going to be disappointed. In this one, the steering is light, quick and accurate but, predictably, doesn't offer much feedback. It's probably just as well that this discourages you from pushing too hard through tighter bends at speed because when you do engage in driving of that sort, this Vauxhall feels distinctly out of its comfort zone. Despite the firm suspension, it certainly rolls quite a lot more than drivers coming from superminis or family hatches will be used to. Still, come on. Nobody buys a car of this kind and drives it like a hot hatch. The high stance that necessitates the firm damping and provokes that bodyroll is the thing that gives you that lovely raised seating position, something you'll particularly appreciate in urban driving. That's when you'll also thank Vauxhall for the lightness of the steering, which is perfectly weighted for the challenges of town terrain. This Mokka X model's 136PS 1.6-litre turbodiesel is known as the 'Whisper' diesel for good reason as it's hushed at all speeds and there's little need to bother the upper reaches of its rev band as a hefty 320 Newton metres of shove is delivered at 2000rpm. It cracks 0-62mph in 9.3 seconds. There are no auto or 4x4 options with the CDTi unit: you'll need the petrol powerplant if you want that.

You might think that updating a car's styling is an easy task. However, when it's one of your best sellers, that job is fraught with risk as you don't want to put off the thousands who chose the previous Mokka every year. That responsibility fell to British designer Mark Adams and his approach has been to give the car a little added X-factor. He's managed it. The headlamps with LED daytime running lights are more angular than the last model's, perhaps even a touch more aggressive. It's a theme carried through to the grille, which is neatly integrated into the car's appearance with a black blade across the upper edge and thin chrome strips that extend from the Griffin badge in the centre. Inside, there's a restyled dashboard incorporating a smart 7 or 8-inch Intellilink infotainment screen. Otherwise, it's much as it was. In the back, the rear seats benefit from wide opening doors that simplify the fitment of a child seat, though that sharply rising waistline might restrict the view out for smaller occupants. As for luggage room, well, there's no high boot lip to negotiate and beyond it lies 356-litres of carriage space - about 30% more than you'd get in a Nissan Juke.

Black pump-fuelled versions of this car all use a 1.6-litre CDTi engine, offered with 136PS. Even for the most basic level of trim, you'll need a budget of close to £24,500. There's no option to pay more for an auto gearbox or AWD - you'll need the petrol version if you want those things. There's a choice of four trim levels in the standard range, 'Active', 'Design Nav', Elite' and 'Elite Nav'. Standard equipment on the mid-range 'Design Nav' models most will choose is impressive and includes 18" alloy wheels on most models, plus LED daytime running lights, front fog lights and silver roof rails on the outside. Inside the cabin, drivers will benefit from an 8-inch touch screen with Vauxhall's IntelliLink Infotainment system, as well as the innovative OnStar personal connectivity and service assistant. 'Elite Nav' is the top-of-the-range trim and adds a full leather interior, heated front seats and steering wheel, plus tinted rear windows.

As far as cost of ownership is concerned, it would be fair to call this Mokka 'class competitive'. As you'd expect these days, a start/stop system is fitted to cut the engine when you don't need it, stuck in traffic or waiting at the lights. As a result, the 136PS 1.6-litre CDTi diesel Mokka X we tried manages up to 50.4mpg and up to 127g/km of CO2. What else? Well, to help you get somewhere close to the quoted fuel and CO2 figures on a day-to-day basis, there's an ECO section of the trip computer that includes a gearshift indicator, shows you fuel results over the last 30 miles and offers a graphical display that's supposed to encourage eco-minded driving. What else? Well, Vauxhall being a mainstream brand, residual values aren't as strong as, for example, you'd get from a rival Honda HR-V, but the Mokka X claws the advantage back with modest cost of options and very affordable servicing you can budget for with a range of pre-paid servicing plans. There's an unremarkable, but potentially extendable, three year 60,000 mile warranty.

The key question here relates to whether Vauxhall did enough with the Mokka X to stay at the forefront of the compact SUV pack. To answer that question, we'd say yes. The changes to the styling and engines may have been small, but the big improvements come inside the cabin and it'll help that this Mokka is now one of the most connected cars you can buy, thanks to the 'OnStar' concierge and personal assistant system being standard on all models. Overall, the Mokka X is a good looking, well equipped and spacious compact SUV that shows just why this class of car is so popular. The affordable running costs of this 1.6-litre CDTi variant may well seal the deal for many buyers.