Why Lease the Audi A6 Saloon? 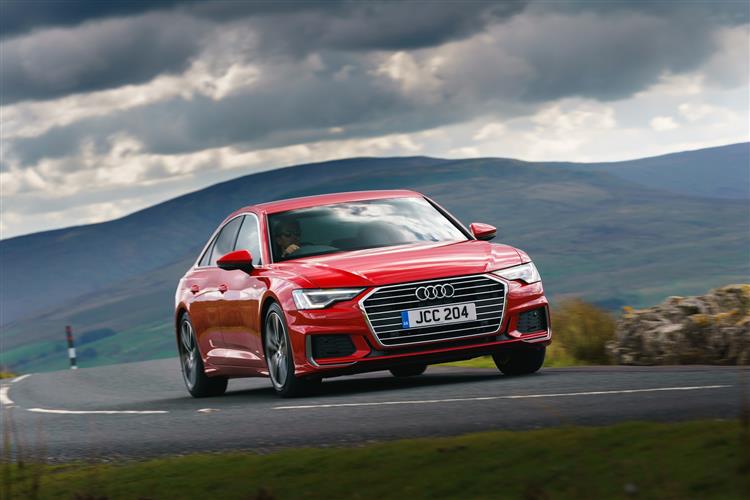 Audi's A6 has further sharpened up its act, aware that fresh arrivals in the Executive class are snapping at its heels. Even entry-level versions are now very well equipped indeed, plus there's cutting-edge connectivity across the saloon and Avant estate bodystyle line-up. In short, it still has much to offer.

Attend an Audi press briefing and they'll bombard you with comparative data that makes it seem the action of an idiot to buy any vehicle without four rings on its grille. Take the A6 executive car. The PR-meisters will cherrypick all of its strongest features, forensically research the weak links in rivals like the BMW 5 Series, Mercedes E Class, Jaguar XF and Lexus GS and home in on them. Ruthlessly. The thing is, car buyers aren't subjected to such convincing propaganda. They make their own choices and the car manufacturers are often at a loss as to explain why Customer A chose BMW and Customer B chose a Merc. All Audi can do is continue to improve the A6 if it wants to become the class leader in Europe. Of course, Audi will tell us that it's the class of the field already. We'll leave it to you to agree or otherwise.

The A6 range is effectively offered in two parts. 'Proper' A6 models are exclusively diesel powered, while the S6 and RS6 sports models stick with petrol engines. Over the last few years, efficiency has gradually been improved across the diesel range, with the most efficient engine - the 2.0-litre TDI four-cylinder with 190PS - reserved for the ultra versions. The trio of 3.0-litre six-cylinder TDI 'clean diesel' units kicks off with a single-turbo V6 with 218PS, and is followed by a 272PS variant, also with a single charger. At the top of the range, the 3.0 TDI clean diesel biturbo produces a hefty 320PS. The high-performance diesel is paired with an eightspeed tiptronic automatic transmission. All other engine variants are linked to either a sixspeed manual gearbox or a seven-speed S tronic twin-clutch transmission. In the versions with front-wheel drive, a dual-clutch auto is used. Quattro all-wheel-drive is available in conjunction with all engines bar the 2.0-litre TDI, and in versions with 272PS and above, it can be supplemented with a sport differential. Sports suspension lowered by 20mm is standard for the A6 S line and optional for the SE Executive model and the former can be rooted to the tarmac even more firmly by S line sports suspension which lowers the body by a further 10mm. Alternatively, the cushioned comfort of electronically controlled adaptive air suspension is available in conjunction with both specification options. The Audi drive select dynamic handling system is standard. The S6 and S6 Avant are powered by a 4.0-litre TFSI V8, with twin turbos helping it to 450PS. That's enough to catapult the saloon through 62mph in 4.4 seconds. The sports differential is standard, as is air suspension, which lowers the body by 20 millimetres. Matt black brake calipers grip the front discs mounted behind the 19-inch alloys. The monster RS6 Avant tops the range, its 560PS V8 jetting it to 62mph in a mere 3.9 seconds and on to a top speed of 189mph.

You'll need to be an existing A6 owner or an Audi sales person to notice the visual differences made to this revised model. Base 'SE Executive' models gt a slightly bolder look courtesy of a revised front apron incorporating more pronounced air inlets with gloss black horizontal struts, more sculpted side sills and a restyled rear bumper now housing a sleeker diffuser at its lower edge. The already more sporting stance struck by the 'S line' and top flight 'Black Edition' models has also been subtly enhanced by a revised radiator grille with a matt black surround and chrome slats flanked by striking side air inlets also fringed with chrome. What else? Well in recent times, the headlights have been uprated, with bi-xenons as standard for 'SE Executive' models and LED headlights with dynamic 'sweeping' rear indicators for 'S line' versions and above. Matrix LED headlights, incorporating clusters of LED bulbs which can be individually dimmed when sensors detect oncoming or following traffic to automatically divert their beams around obstacles, are optional for all A6 and S6 variants and standard for the RS 6 Avant. The interior includes a wraparound dash with low key but high quality detailing follows Audi's latest design theme. The Avant version features a 565-litre load bay that can be expanded to 1,680-litres. The 'S line' versions used to exclusively feature a black interior but the colour palette these days also extends to a Lunar Silver upholstery and headlining option.

Prices start at around £32,000 for the 2.0-litre diesel in 'SE Executive' trim. Equipment upgrades for this least expensive variant include LED interior ighting, front seat heating, electric lumbr adjustment and stylish 'Aluminium Ellipse' dashboard inlays. The Audi smartphone interface is now available across the range in combination with an optional Technology Pack, bringing Apple Car Play and Android Auto to the car. If an iOS or Android smartphone is connected to the USB port, the handset's contents such as navigation, phone, music and selected third party apps are offered in a separate MMI menu. Otherwise, it's as you were, which means a basic kit tally running to alloy wheels, leather upholstery, cruise control and front and rear parking sensors, along with xenon lights, SD card-based satellite navigation, Bluetooth phone preparation, split/folding rear seats and light and rain sensors. 'S line' models add larger 18-inch alloy wheels, LED headlamps, sports suspension, upgraded Valcona leather upholstery and an exclusive 'S line' exterior and interior styling treatment. The MMI navigation plus infotainment system is based around an eight-inch retractable colour monitor and uses a powerful Tegra 30 graphics processor from Audi's partner Nvidia, including MMI touch, which enables the driver to scroll and zoom in lists and maps via a touchpad. 'Audi connect' also brings tailored Internet-based services and media streaming apps to the car via 4G.

Given that a large number of A6s continue to be sold to business users, getting the numbers right is key and Audi has certainly concentrated on driving down CO2 outputs - and therefore tax liabilities - across the A6 range. Kicking off with the 114g/km 2.0-litre ultra diesel, emissions are very competitive right across the board. All engines comply with the limits of the Euro 6 emission standard, and their CO2 emissions have been reduced in recent times by as much as 22 percent. The A6 features engine stop/start as standard, as well as regenerative braking, which improves economy by reducing alternator drag during normal driving, instead driving the alternator only during deceleration and braking. Another feature that ekes a little more out of a gallon of fuel is the electrically assisted power steering.

The Audi A6 isn't the most overtly compelling car in its class, no matter how persistently its manufacturer tells us otherwise. It doesn't have the instant rakishness of a Jaguar XF, the pure-bred dynamics of a BMW 5 Series or the elegance of a Mercedes E-Class. Still, it's a vehicle that rewards a considered and cerebral approach. What's more, it's one of those cars that grows on you with familiarity, the sheer intensity of care that's gone into making it liveable proving hugely impressive. So what the A6 lacks in instant impact it more than makes up in depth of engineering. There's a dizzying breadth of talent too; the 'ultra' models offer the sort of efficiency we'd normally associate with a supermini, while the RS6 offers the performance of an old-school supercar. Ovrall, the A6 is going to appeal to those who love high-tech and low fuss. It remains very Vorsprung durch Technic.