The Euros Warm Up

With Morecambe, Blackpool and Brentford winning their EFL play off campaigns, only one remains before the Euros - the chance to compete in the EFL itself for 5 big names from the Vanarama National League. Oh, and Bromley.

First up on Saturday we have Notts County v Chesterfield, followed by Hartlepool v Bromley on Sunday. Torquay and Stockport await them in the semi-finals and all 6 will be battling it out to join Sutton in League 2 next season.

I don’t think anyone would bat an eyelid if one of the ex-football league clubs came through. It’s really hard to establish a clear favourite. For many there will be an obvious underdog but write Bromley off at your peril! Today I’ll go over the form with a fine-tooth comb and see if we can work out which 2 sides will progress to the semis and what drama awaits.

Ian Burchnall managed to get Notts County firing just at the right time, confirming their once threatened play-off place before the last round of fixtures with pivotal wins at Wrexham and at home to eventual champions Sutton. It wasn’t just important for their play-off aspirations but also because the fans were just about to return to Meadow Lane and without that late run the atmosphere would have been quite different.

Notts County did lose their last game to Bromley. How much of a psychological edge could that prove to be if those sides both advance to the final?

Looking at the big positives for Notts, they scored 18 in their last 8 games, 7 of which were scored by Ruben Rodrigues. This won’t scare any of their play-off opponents, but they won 5 of their last 8 having only won 2 in the 8 prior to that when Burchnall came in.

In summary, they only won 7 of the 16 league games since Neil Ardley’s departure (3 draws and 6 defeats), but they come into the elimination game having only lost 1 in their last 8 which is enough to give the 4000 Magpies the belief that they can win this game.

Chesterfield will remember how they came to Meadow Lane in February and took all 3 points with a Gavin Gunning 1st half winner, so will have no doubt they can do the same again. They really earned their play-off place, not just with that late winner against the run of play on the last day of the season away at FC Halifax, but also with the victory against in-form Dagenham the game before, which ultimately set up the grandstand finish.

After 4 straight wins in late March - early April, it really looked like Chesterfield were dropping out of the picture having not recorded a win in the 5 games that followed. Fortunately, they found the form they needed to record 3 wins and a draw in their last 4 games to confirm their right to play County.

Personally, I think there’s a lot more to come from Notts County. They usually dominate possession at home and now they’ve added that goal threat that abandoned them for portions of the season I think they make it through this one, especially with the home advantage.

I’ve only seen Chesterfield live once and that was away to Hartlepool, where I thought they were really poor. They lost to Torquay in the game after but then collected the 10 points from 12 so there’s obviously more to them than I witnessed that day.

If you look at Chesterfield’s record against top 7 sides, James Rowe’s last scalp was Notts County 3 months ago. They’ve had 6 failed attempts since. You can read into that 2 ways: are they unable to go toe to toe with the league’s biggest clubs, or are they just focusing on the only opponent that matters as far as this weekend is concerned? 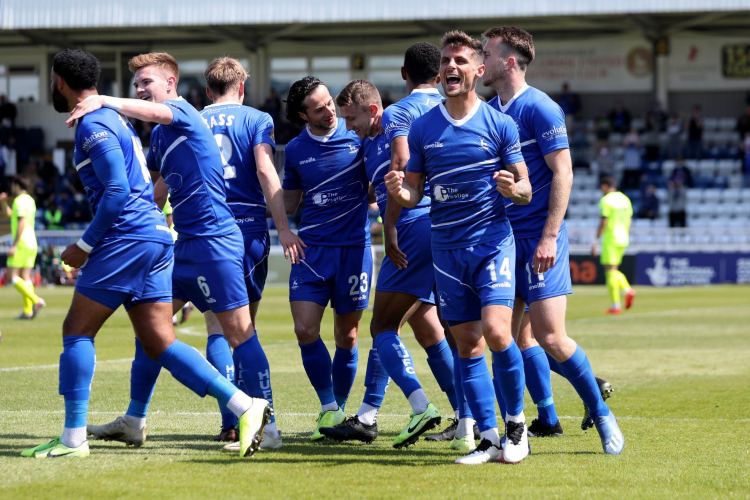 Hartlepool’s home form can’t be dismissed in our second play-off eliminator at Victoria Park. Challinor’s side went 13 unbeaten at home from the 8th of December to the 8th of May before Maidenhead brought that run to an end at a crucial part of the season. It followed an away defeat to Bromley and those back-to-back losses effectively ended their title hopes.

They would then win 2 of their last 3 but defeat to Sutton would cost them 3rd place which would have meant Stockport were playing this game instead of them.

The head-to-head is interesting as we know Hartlepool lost to Bromley on bank holiday Monday. However, before Andy Woodman came along, under Neil Smith they managed a 0-0 draw at The Vic all the way back in October and Hartlepool had started the season with 3 consecutive wins until the Ravens arrived.

Bromley did what Wrexham, Eastleigh, Halifax and Dagenham all failed to do in qualifying for the play-offs. The fact that they only lost one game (to Chesterfield) since Andy Woodman took over is impressive, but when you look closer and you realise the opposition they had to play against you start to take them far more seriously than you might have.

Draws away to Stockport, Torquay and Notts County. Home wins against Notts County, Hartlepool and Dagenham. Away wins against Chesterfield and Halifax! They had one of the trickiest run-ins but still beat the teams that weren’t pushing for anything themselves.

I honestly think they can do it, not just in this game but the whole thing. They’ve collected more points than anyone left in the play-offs over the last 10 games and just look so disciplined and hard to break down. Andy Woodman hasn’t lost an away game yet and he’s overseen 8 of them!

You’ve then got the league’s top scorer in Michael Cheek to worry about. Although he’s only scored 1 in his last 7, that must mean he’s due a couple! Also, unsurprisingly young talent Liam Vincent has just been sold to Portsmouth, so they’ll have to do it without his services. Yet another great advert for the National League’s academies providing a pathway to bigger and better things.

The bottom line here is that Woodman ended Challinor’s title aspirations and now he’ll be looking to end all promotion hopes with a win on Sunday. Hartlepool looked very flat against Sutton and almost looked resigned to playing their part in the champions’ big day (although if that Jamie Sterry shot goes in off the upright it could have been a different game). That’s all irrelevant now as they bounced back against Weymouth winning 4-0. As far as this one is concerned, it’s too close to call. I can’t wait to see who does it.