You won’t meet a nicer bloke than manager, Matt Gray, or long serving chairman, Bruce Elliott, but social etiquette and being good hosts won’t get you over the line. Fortunately, they showed the hunger and ruthlessness on the pitch that does send you a long way to getting you where you want to go.

Sutton beat Hartlepool 3-0 on Sunday, their 4th win in a row to lift the Vanarama National League trophy. The size of the achievement cannot be underestimated given the budget Matt Gray, just two years into the role, was working with this season.

You only have to look at the clubs left trailing in their wake to understand that there is something special going on at Gander Green Lane, something that ex-football league clubs like Torquay, Hartlepool, Notts County, Wrexham and Stockport couldn’t fully compete with. 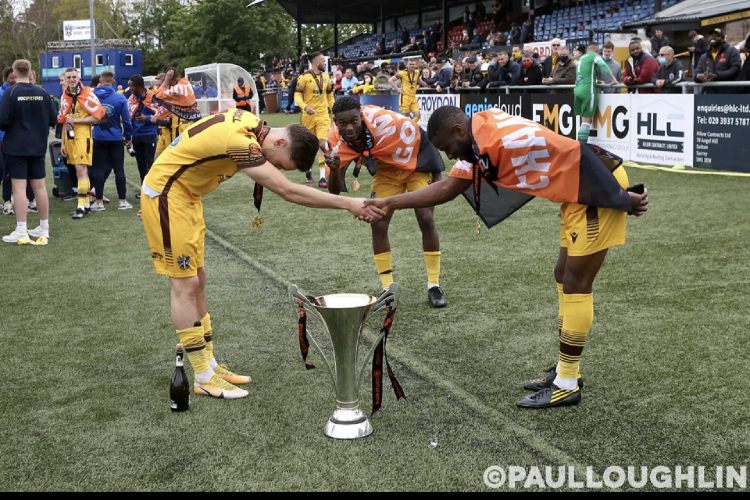 They scored 16 goals in their last 6 games, scoring 3 goals per match except for in the 3-2 defeat at Notts County. If that doesn’t show a complete disregard for the pressure they were meant to feel in the closing stages, the fact that they overcame potentially derailing defeats to Torquay and Eastleigh in April shows the belief required to punch above their weight consistently all season.

I remember speaking to Matt Gray before the Eastleigh defeat and asking him whether the goals had dried up. They’d only scored 4 in their last 4 at that point, but they all came against Altrincham. They’d failed to score in the 3 games prior to that and again failed to score against Ben Streven’s outfit, which gave lots of people reason to count them out. They then subsequently won 6 of their next 7 games to take the title.

Sutton haven’t had any major injury concerns, which would work in any team’s favour. However, their achievements can’t be downplayed to good fortune. Recruitment is key and bringing in Isaac Olaofe from Millwall and Donovan Wilson from Bath City proved decisive in helping them to become the league’s top scorers heading into the last game. Dean Bouzanis deserves a mention too for keeping 18 clean sheets, equal to Stockport’s Ben Hinchcliffe going into the final game.

It’s such a privilege to follow these stories from start to finish, getting a feel for what the journey is like from the managers personally with every game you go to and every conversation you have. Matt gave me an insight into what it takes to maintain a title push and he has me convinced there’s no rocket science or great secret involved, just honesty, belief, togetherness and an ability to keep doing the things that are working time and time again.

Having The Right Mindset

Matt also embodied that classic line as to how you never let the highs get too high nor let the lows get too low. I saw that from him throughout, regardless of the result. The fact they went the season without ever losing consecutive games embodies how strong a mindset they were able to sustain, which in this league, where the unthinkable often happens, speaks volumes for the character throughout the squad.

Talking of heroics, remember me telling you about 7th tier Hornchurch in the FA Trophy? They only went and won the whole thing! It’s now the 5th Trophy win for manager Mark Stimson and the 7th time Hornchurch have beaten a side from a league or two above on their way to lifting the trophy. If they can keep the squad together, we’d expect to see them arrive in the National League South soon enough (although now everyone will really want to beat them!)