There are defining moments in the career of every football player. For [Alun Armstrong](https://en.wikipedia.org/wiki/Alun_Armstrong_(footballer), it came in November 2001 at Portman Road and it came against one of world football's elite clubs – Internazionale.

The Serie A giants arrived in Suffolk boasting a squad packed with world-class talents like Javier Zanetti, Clarence Seedorf and Adriano.

There were just nine minutes left on the clock when Geordie striker Armstrong rose to meet a Jamie Clapham cross and head the ball past Italian international goalkeeper Francesco Toldo.

Portman Road rose to acclaim a player that had learned his trade at Newcastle United, before making a name for himself at Stockport County and Middlesbrough.

The Tractor Boys hadn't experienced many moments like this since the halcyon days of Bobby Robson, Terry Butcher and Kevin Beattie.

The goal proved to be the difference between the two sides and Armstrong would go on to score in the return leg in the San Siro, although his side bowed out of the UEFA Cup after a 4-1 aggregate defeat.

He is now following in his Dad's footsteps and making his way in the professional game with Middlesbrough.

But it is on Tyneside, rather than Teesside, where Armstrong junior is making a name for himself.

A season-long loan with Gateshead has started brightly and the young striker has hit five goals in his first seven games for the National League club.

An impressive return for a young player that showed promise in his first season in competitive, senior football by scoring 23 goals to help Blyth Spartans to the Evo-Stik NPL Premier Division title.

His Dad watched on from the dugout after being appointed as manager of the Northumberland club just weeks after his son has signed.

But having someone in the family that has reached the highest levels of the game has been a help, rather than a hinderance, for the on-loan Heed striker.

"I was a bit too young to remember the goals against Inter, but I know what it meant to him and the family," explained Armstrong.

"He had a great career and played at the top level, that is where I aspire to be.

"But there is no pressure to match what he did, if anything it is a motivation to me.

"He was always offering me good, honest advice when I was growing up and he is a fantastic support now.

"Obviously it was strange having him as a manager at Blyth but we had a great time at a fantastic club.

"Learning my trade there helped me get the move to Middlesbrough and now I am focused on creating a career of my own." 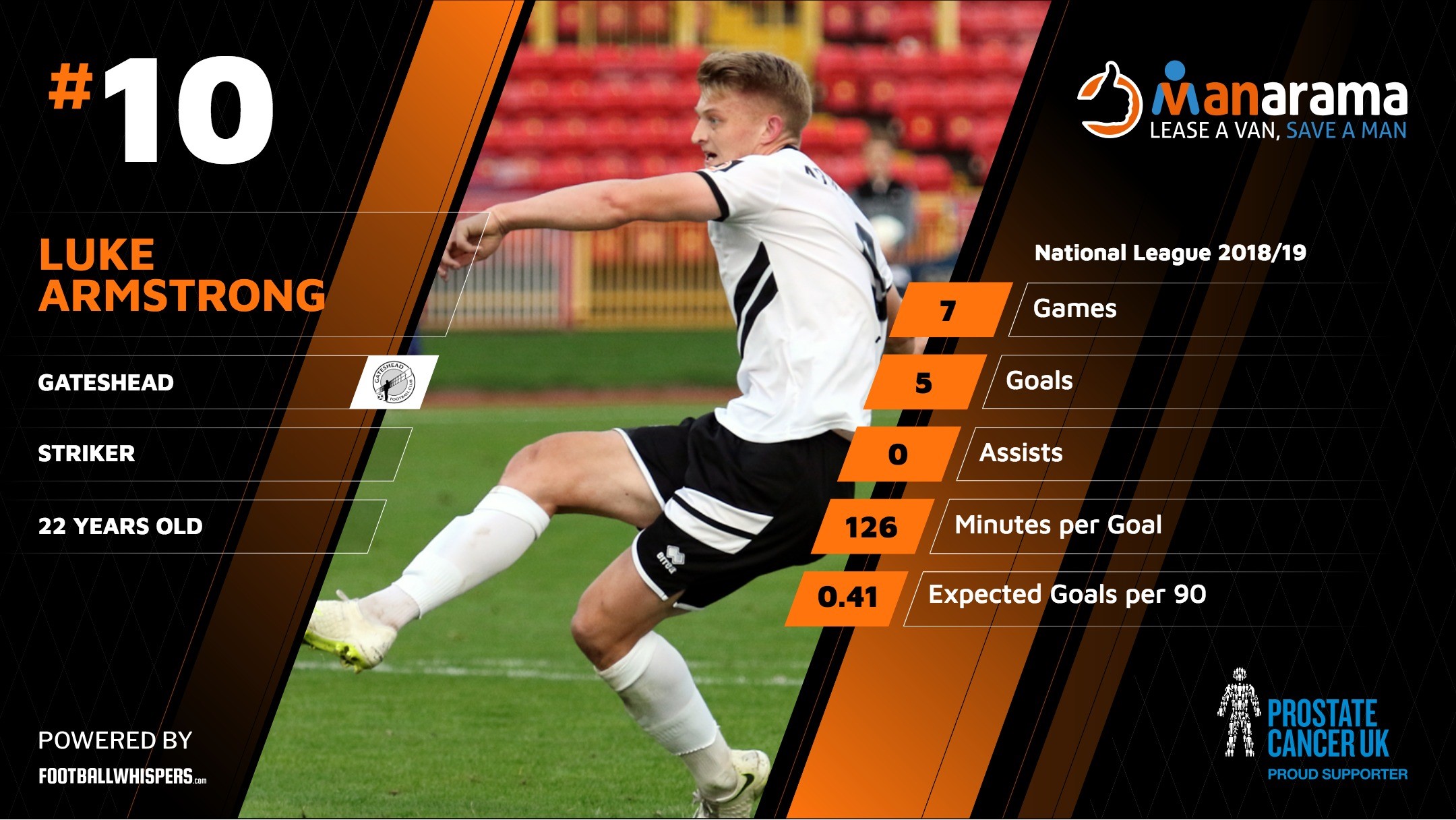 Amid interest from Football League and Scottish Championship clubs, Armstrong chose to join National League side Gateshead on loan for the season.

An opening day goal at Maidenhead United was quickly followed by a brace on his home debut in a 2-1 win against the 'Class of '92'-backed Salford City.

Further goals came against Dover Athletic and Leyton Orient, before an injury curtailed his impressive start to life at the International Stadium.

But Armstrong is relishing life on the South banks of the River Tyne, as Gateshead make a mockery of pre-season predictions of a struggle against relegation.

"Expert opinions" have been a motivating factor for a Gateshead squad packed with young, promising talents according to the young striker.

"We know what people thought would happen this season and we know they were expecting us to do.

"We are constantly being watched to see how react to little things like a first defeat, or going behind in a game.

"We go into games as underdogs, but we don't see ourselves in that role, we know what we have in the dressing room.

"But we are doing well and the young players all know that we have to keep performing to stay in the side and to keep proving people wrong.

"It is a motivation for us."

Watson's young side has drawn praise for their style of play and Armstrong has been impressed with the former Everton and Aston Villa defender.

"He's got a nice balance to his coaching," explained Armstrong.

"He gets on with the lads but there is a distance when there needs to be.

"We all enjoy his training sessions and his attention to detail is excellent.

"We know we won't get hammered for trying something different.

"That's the reason why we are doing as well as we are at the moment."

Armstrong will return to Middlesbrough at the end of his loan spell and is hoping to follow the likes of Lewis Wing and Dael Fry into the Boro first team.

"The target is the same as it always has been for me.

"I have high standards and it's down to me to maintain them.

"If I don't make it at Boro, I want to play in the first-team at a Football League club.

"I want to go as far as I can and the main thing for me is to enjoy my football.

"I am doing that at the moment and I will hopefully continue to do that throughout my career."

Luke Armstrong's career-defining moment is yet to come, but just like his Dad Alun, he will keep working hard to ensure that it does.

This article was written by Mark Carruthers from Football Whispers.