There is an exciting race for promotion developing in the Vanarama National league this season, with several title contenders starting as they mean to go on and a pack of unexpected challengers emerging.

Once again, this has underpinned the level of talent on show in non-league football's highest tier.

Here, we examine some of the division's hottest properties by picking out the Vanarama National League's four best midfielders.

While Salford City's summer signings like Adam Rooney and Danny Lloyd took a lot of the headlines, arguably one of their most impressive – and most important – was the capture of midfielder Danny Whitehead.

A free transfer arrival from Macclesfield Town, the 24-year-old was fresh from winning the Vanarama National League title.

Beginning his career at Stockport County, he landed a move to Premier League West Ham United and made his debut in an FA Cup humbling by Nottingham Forest in January 2014.

Following a short-term spell with Accrington Stanley, he returned to non-league football with Macclesfield before moving into the League with Wigan. Again, it didn't work out so he moved to the Silkmen once again for a second spell.

Now he is developing into one of non-league's brightest talents. An outstanding passer of the ball, he is capable of dictating games from the centre of the park.

Already a huge part of the Ammies' machine, make no mistake about it, Whitehead can play a lot higher.

When the 27-year-old is in the mood, he can run games single-handedly. He's already won promotion from the Vanarama National League once as he captained Forest Green Rovers to promotion final glory against Tranmere Rovers.

Noble joined the eco-powered club from Notts County where he had a reputation for getting on the wrong side of referees and spending too much time watching on from the stands under suspension. But that's an area he seems to have cleared up.

He left Rovers to return to County before pitching up at Pools in the summer where he has quickly become a focal point of the side.

His range of passing is vast, he can bamboozle opponents with his flicks and he is a leader on the pitch.

If Hartlepool are to get back into the Football League then Noble will likely be a big factor. Already this season he has six goals from his first 13 games. Not a bad return before the end of September. Not many can match him on his day.

Close observers may remember that Eastmond has played in the Premier League. Back in 2010 he made his Arsenal debut alongside Cesc Fabregas against Bolton Wanderers in a 2-0 away win.

The following his season he made his Champions League debut away to Shakhtar Donetsk.

In 2013 he moved on to Colchester United, where he'd had a loan spell, but injuries kept hampering his progress and, after spending time at Yeovil, dropped into non-league with Sutton.

Paul Doswell's U's were in the Conference South back then, and in his first full season he helped them to the title.

Eastmond has become a regular fixture in the team ever since, last year making it into the National League Team of the Year as the part-time outfit reached the play-offs, a season after he faced his former club the Gunners in the FA Cup fifth round.

The 27-year-old is one of the division's most consistent performers – he made the team of the year in 2017/18 – but is also marked out by his versatility.

Doswell can play him in a number of roles, even in defence, and know a solid performance will more than likely be delivered. Class act. 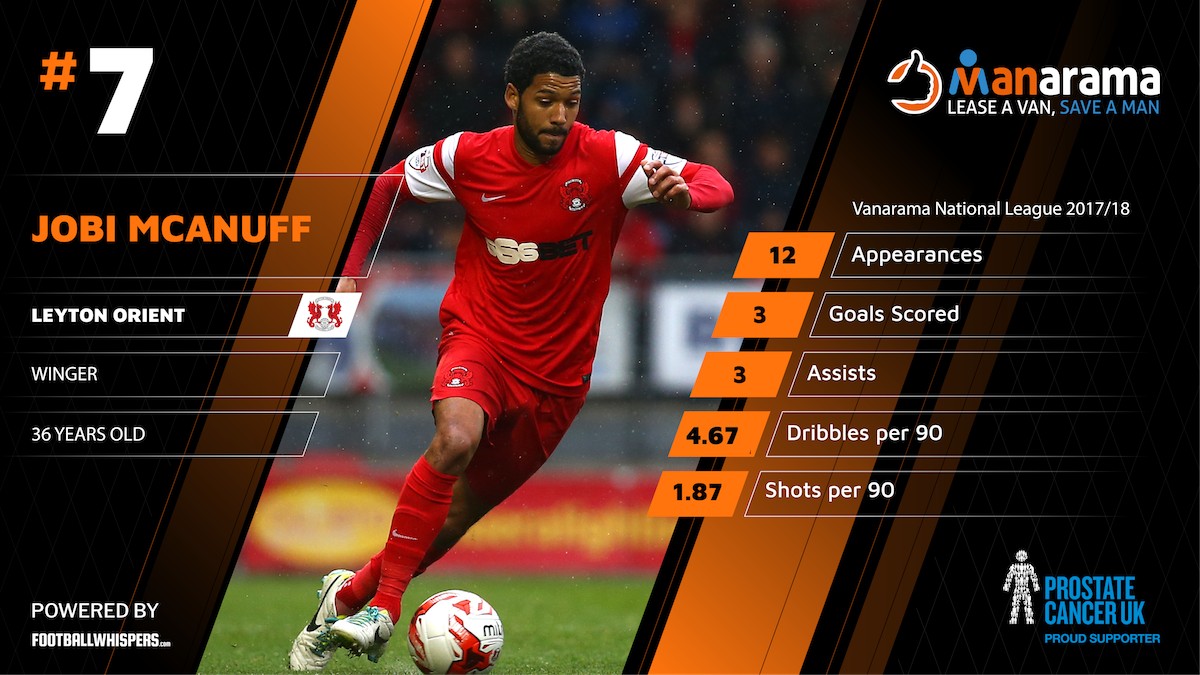 A shout-out for the older heads! McAnuff may be 36 years old but he is a huge part of Leyton Orient and their ultimate aim this season.

Desperate for a Football League return, Orient have had a hot start to the season and are looking good for a title push.

With a CV that boasts hundreds of Football League games for the likes of Wimbledon, Cardiff City, Crystal Palace and Reading – where he even had a season in the Premier League – the class is obvious.

Mainly deployed on the flanks, he's not the traditional winger these days but his calm and influence ticks Orient along and he often moves inside to add his nous to the centre of the park.

However, it's not just what he does on the pitch every Saturday that is so important to the O's but also his influence off it.

Boss Justin Edinburgh has regularly hailed McAnuff. His performances are top drawer but his leadership is vital. The way he conducts himself around the club acts as a shining example to the younger players in the squad. He is raising the standards. And Orient fans hope it will be enough to get them back into the top 92.

This article was written by Tom Brindley from Football Whispers.