Lifelong Grimsby Town fan Matthew Newton handed over the National League promotion final trophy to his club captain Craig Disley at Wembley, after winning a competition through league sponsors Vanarama. Mariner supporter Matthew was selected as he wished to do it in memory of his fellow Town fan Rich Broadley, who sadly died of Leukaemia aged 20. Matthew's prize included a tour of Wembley Stadium and hospitality in the Bobby Moore suite before the game.

When asked before the game why he entered the Vanarama competition, Matthew explained: "Rich didn't have a chance to see us back in the football league, so it really would be the greatest honour to be able to present the trophy to Grimsby Town in memory of him." 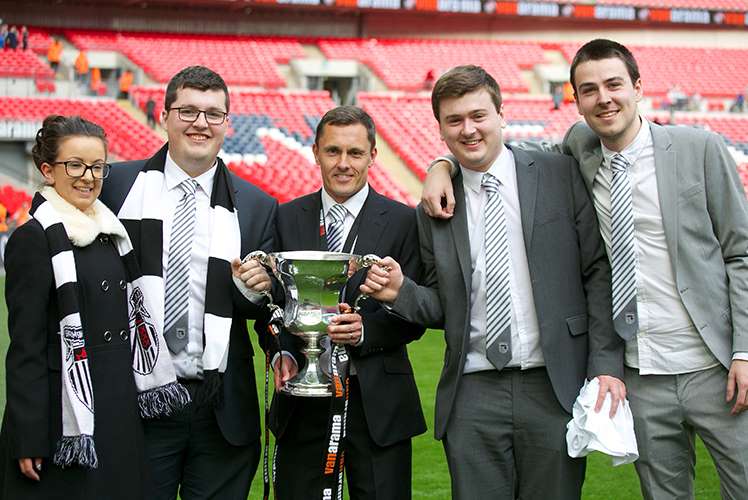 This dream became a reality after Grimsby Town beat Forest Green Rovers 3-1, with a brace at the end of the first half from Omar Bogle and a dramatic injury time goal from Padraig Amond. This sealed their victory and the emotion of Amond's goal caused mass euphoria for all of Grimsby Town's players and fans - with Wembley Stadium erupting in noise.

Watch the best bits from the Vanarama Big Day Out below.

The Vanarama Freestylers amaze with their silky skills

Entertainment throughout the day was provided by the Vanarama Freestylers. Tom Folan and Jamie Knight are well-known within the footballing freestyle circuit and displayed their remarkable skills to thousands of fans on Wembley Way, besides the Bobby Moore statue and on the famous pitch.

There was the opportunity to take part with them and learn some dazzling tricks. This proved popular with the younger fans of both teams, with prizes given to those who got involved. You can watch the Vanarama Freestylers in action below.

Inside the stadium the Vanarettes gave away souvenir t-shirts to Grimsby Town and Forest Green Rovers fans by firing them out of cannons. Catching a t-shirt was one of many highlights from the day for fans.

Making sure tickets go to the fans

As sponsors, Vanarama has been able to give away 90% of ticket allocations to fans of clubs in the National League. For the promotion final, an early bird ticket scheme was run to offer fans discounted tickets for the game at Wembley Stadium. Supporters of Grimsby Town must have been confident of reaching the final, as they bought over 1,000 tickets in advance of knowing who would be playing. It certainly paid off for them!

Are you ready for next year?

Vanarama is pleased to be continuing the sponsorship of the National League divisions for a further year over the 2016/17 season. We're already looking forward to doing it all over again at Wembley next May!