There was a midweek fixture that particularly stood out to me in the Vanarama National League. At this stage in the season our focus naturally begins to draw towards the top of the table, but there is space to appreciate the efforts of others who are undoubtedly doing a fantastic job.I should give an honourable mention to Darren Sarll at Yeovil who has taken the Glovers from rock bottom to just four points off the play-off places. They hadn’t won a game after their first 10 fixtures but thanks in part to the 12 goals from in form Rhys Murphy and winning seven consecutive home fixtures before Tuesday’s defeat to Bromley, nobody would be surprised to see them flirt with the top seven soon.Another nod should go to Alan Devonshire at Maidenhead. They sit in 10th despite having only played 25 games. For comparison, the three sides below them have played 29, 29 and 30. Their next three fixtures against Barnet, Altrincham and Weymouth could see them climb even higher up the table. We‘d be forgiven for looking at a table and assuming that the quality of a manager is simply determined by the league position of their team. However, when you evaluate the budget they’re working with and the job they’re doing with the resources availableto them, there were two managers in opposite dugouts on Tuesday night who deserve a lot of credit.

Hats Off To Searle & Wild

Pete Wild’s Halifax ground out an important 1-0 win over Danny Searle’s Aldershot to move ahead of Notts County into 6th. Going into the game, Aldershot had three consecutive wins behind them and were only three points behind Halifax, who occupy one of the much sought-after play-off places that no fewer than eight other clubs are in immediate contention for.

Before the match, only leaders Sutton had taken more points than these two managers over their previous six games. I think Pete Wild has been exceptional at Halifax. It remains unclear if the club wanted to play on when the resolutions were tabled as there was no official statement made by the club, but they have since revealed that they have taken out a loan to finish the season and have cut the budget.

So, despite the uncertainty and reduction in playing budget, Wild has been able to inspire his side to victories against then league leaders Torquay, Wealdstone, Notts County, Solihull and now Aldershot. They also earned a point against high flying Hartlepool, so this run of five wins from six will not have come easily. They are hard to beat and their fitness has been a key consideration. 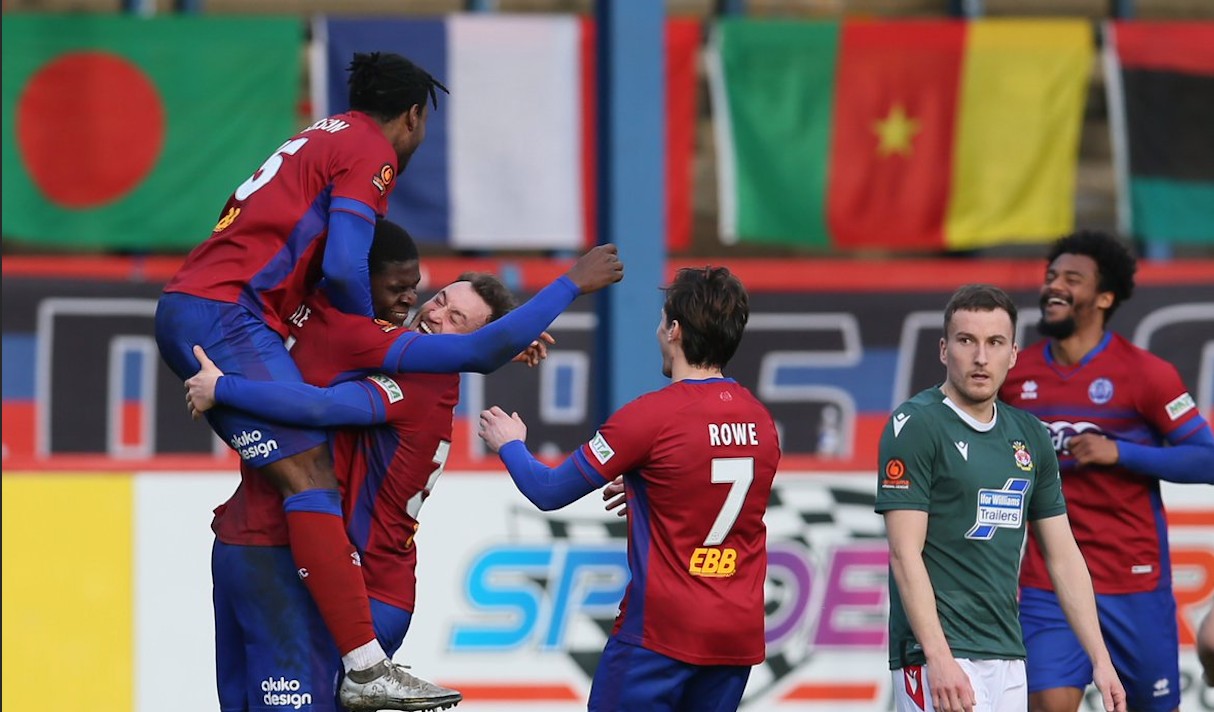 Danny Searle knows all about budget cuts too. Aldershot have a young, inexperienced side and he has implemented a long-term plan at the club to develop a youthful squadto bring success in future seasons. I know the club were one of the more sensible protagonists with the uncertainty around the level and the playing budget is lower than many of their National League rivals, something the average fan doesn’t always take into account when assessing the achievements of a manager.

He is actually working with the lowest budget an Aldershot manager has had in the National League. The chairman recently revealed on the club’s media channel how they had cut the playing budget at the start of each season Danny has been at the club and then again at Christmas, so their excellent recent form is testament to the achievements of Danny and his team.

Searle was recently linked to the Northampton job and whilst it will have surprised some, I can see why league sides would be interested. Player development is his bread and butter trait and one that will always serve him well. He recently gave National League debuts to centre half Ben Shroll, who played 90 minutes in the 3-0 win v Wrexham, and to goalkeeper Ryan Hall, who made his league debut in the 2-1 victory against Altrincham.

Chesterfield v Sutton may have been the big game, but Halifax v Aldershot was the first score I was looking out for on Tuesday night. Aldershot have done brilliantly to getthemselves into a position where they are an outside shot at the play-offs and shouldn’t be discouraged by the defeat. Meanwhile, Pete Wild will continue to look up the table and try to cement Halifax’s position in top seven.

This league table is so tight and despite Halifax’s win there are still just six points between the two sides. Given they sit in 6th and 14th, I’m sure the table will continue to move around dramatically between now and the end of the season.