Premier League stars Jamie Vardy and Andre Gray stand as examples of just how far a prolific spell in the National League can catapult a young striker's career.

Such recent successes as those of the now Leicester City and Watford men have meant there are more eyeballs than ever on the hotshots of English football's fifth tier.

Here, our friends at Football Whispers have identified the five deadliest centre-forwards currently plying their trade in the Vanarama National League.

Perhaps the most notable non-league signing of the summer, Rooney joined Salford City from Scottish Premiership side Aberdeen.

Plenty questioned his motives, suggesting the Republic of Ireland Under-21 international's motivation for moving to England's fifth tier purely was money, but Rooney has ignored the critics and continued doing what he does best – putting the ball in back of the net.

The 30-year-old striker has bagged eight goals in 13 games for the Ammies this term, scoring at a rate of a goal every 144 minutes, while also chipping in with one assist.

Salford might have had to splash the big bucks to attract a player of Rooney's calibre, but their investment will have been more than worthwhile if he guides the 'Class of '92'-owned side to promotion. 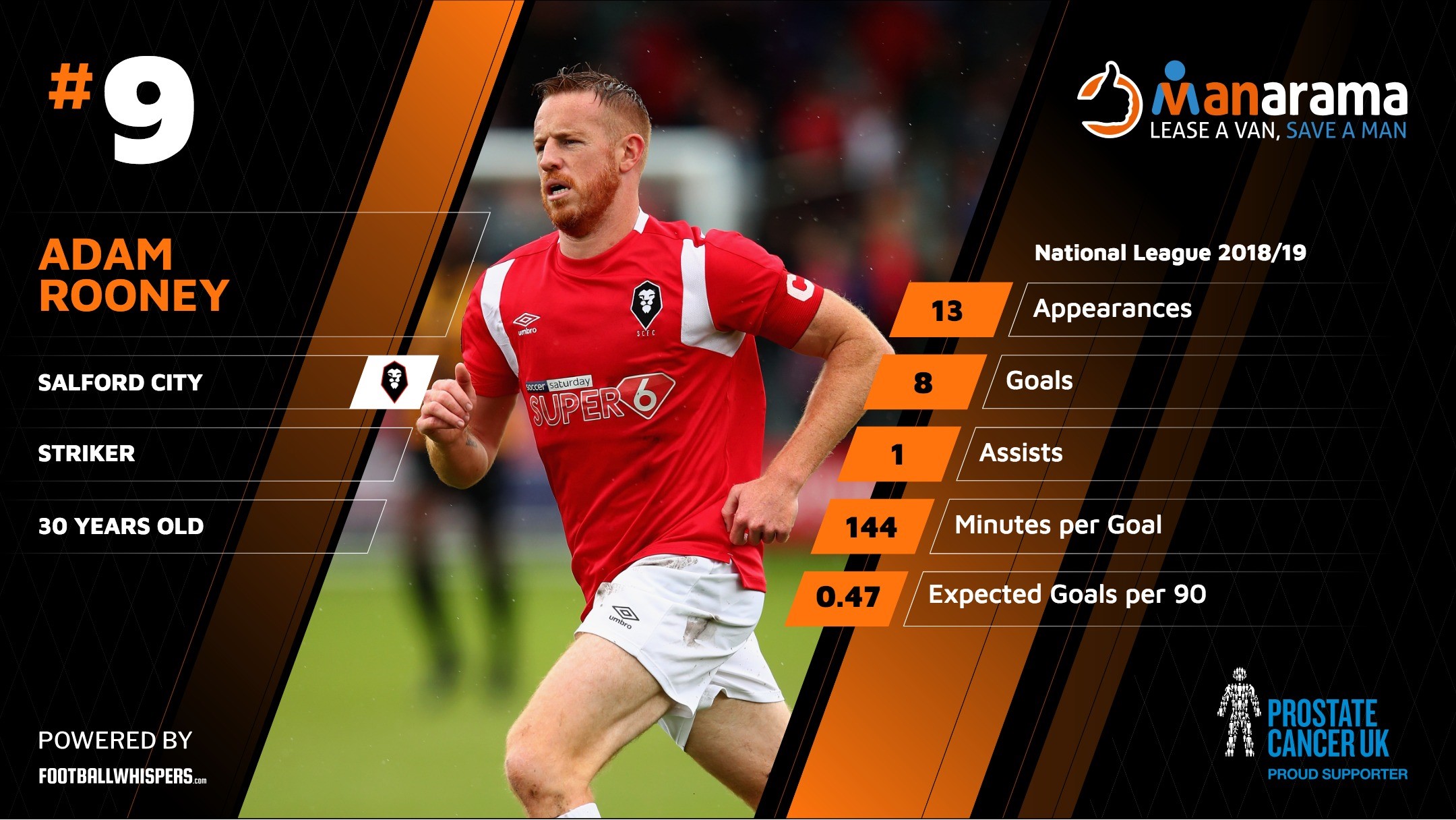 He may still only be 22 but, in football terms, Bonne is something of a late bloomer. Getting his start in the professional game with Colchester United in League One, the striker never managed more than three goals in his four seasons with the U's.

Loans to Lincoln City and Woking proved no more fruitful and Bonne departed Colchester in 2017, signing with Leyton Orient.

Since making his switch to the National League, however, Bonne has been on fire, scoring 25 all-competitions goals in his first season with Orient and sitting atop the division's scoring chart this term with nine goals in 13 outings already.

Despite being born in Ipswich, the O's hot-shot is a two-cap Zimbabwe international having been born to Zimbabwean parents.

Starring for ambitious and upwardly mobile Fylde, Rowe has already been the subject of interest from Football League clubs, with Cheltenham Town seeing a bid for the 26-year-old forward rejected in August.

Rowe joined Fylde from Lincoln in 2014 and has been incredibly prolific ever since moving to Mill Farm, scoring 66 goals in all competitions in his first two seasons with Fylde, before a stunning return of 47 strikes in the league alone fired the Coasters to promotion from the National League North in 2016/17.

Just 19 years old, Maidenhead hitman Kelly appears destined for a bright future in the game. A graduate of the Magpies' own youth system, Maidenhead look to have a real gem on their hands in the teenager.

Sent on loan to Walton Casuals last season, a mammoth return of 40 goals has earned Kelly the confidence of manager Alan Devonshire to lead the line for the first team after returning to his parent club.

And the manager's faith has been repaid. Kelly already has five goals to his name in just 656 minutes of action, with a spectacular brace against Eastleigh – comprised of a 20-yard rocket and a stunning individual effort – earlier in the campaign going viral on social media.

On loan from Championship side Middlesbrough, 22-year-old Luke Armstrong, son for former Boro star Alun Armstrong, is impressing in the National League with Gateshead.

Armstrong joined Middlesbrough from Blyth Spartans in 2017 and played regularly for the Riverside club's under-23 side last season, scoring seven goals.

Sent to Gateshead to gain first-team experience, the young striker is impressing with the Tynesiders having already notched five times in just 630 minutes.

Armstrong is also proving to be a big-game player for Steve Watson's promotion chasers, having scored recently against table-topping Leyton Orient to add to a brace earlier in the campaign against Salford, currently second in the division.

This artic__le was written by Ryan Baldi from Football Whispers.