The National League Title Race Is On

We undoubtedly have a title race on our hands this season and I wanted to take a closer look at who’s in the running for promotion to the football league. I’ll be factoring in the type of run-ins all 6 sides are facing and not just games against fellow promotion chasers but also notably the teams they might face whose season is effectively over because of no relegation this year.

We also have to consider the small matter of the 3 points successfully gained by 11 teams against Dover that are yet to be deducted. Boreham Wood potentially stand to lose just a point. Notts County could be earning a slight reprieve having lost to Dover on the opening day.

The league ends on the 29th of May and including this forthcoming round of fixtures there are just 10 weekends left for each team to conclude their games so some will be busier midweek than others.

Although Bromley are in the top 7, I’ve respectfully left them out as I don’t think they can win the title. I’ll look at the candidates for the play-off places in the coming weeks as I recognise Maidenhead who have 17 games left and recently beat Chesterfield and Torquay absolutely deserve a look. Also, Halifax have 5 wins in 7 and Chesterfield have 6 wins in 7 at home so these are the sides I’d say Bromley, Wrexham and Notts County especially need to look out for. 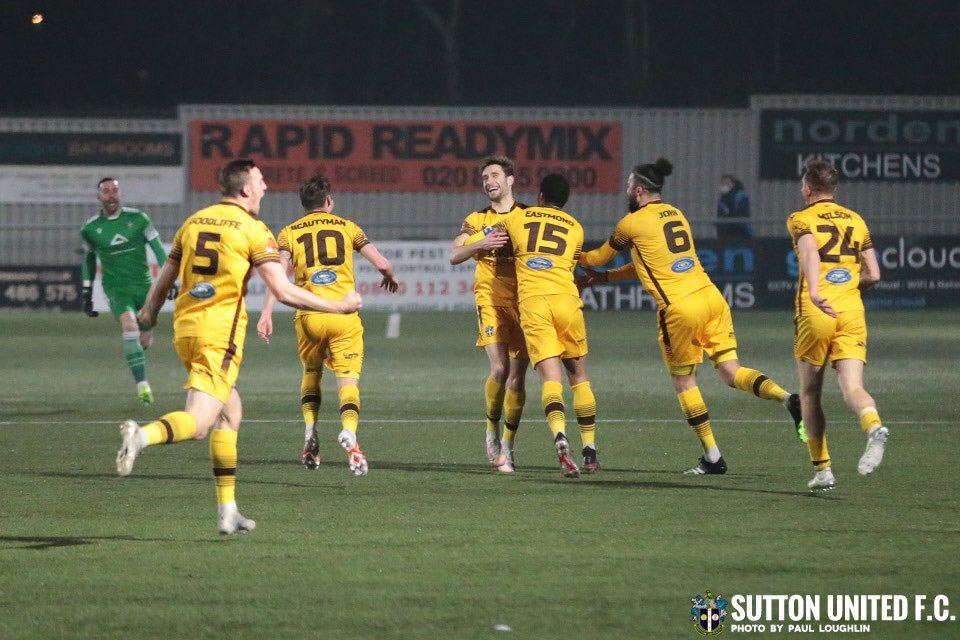 Sutton are 11 unbeaten. Harry Beautyman has scored 10 goals from midfield and playing himself into the football league regardless of the clubs looming success. They play fewer games against their rivals than any other side in the chase for promotion and they face more sides with nothing to play for than any of their rivals.

2 of the 3 games vs. top 7 opponents are at Gander Green Lane. They’ve scored more goals than their rivals in the last 10 and they didn’t play Dover so no pending points deductions.

Everything points towards Matt Gray’s Sutton selling some astro-turf on ebay in early June. Millwall’s Isaac Olaofe is on good form with 8 goals and Donovan Wilson has come in on loan from Bath and scored two winners in a row.

If they take 6 points from 9 in their next 3 games v Halifax, Boreham Wood and Solihull they then have 8 days off due to a Dover postponement. That time to re-group and focus on the home straight will be invaluable. Only a sizeable wobble could deny them the title all things considered.

Games to play v teams with nothing to play for:  2, maybe 3.

Solid defensively, Ben Killip has kept a division best 12 clean sheets. Just 1 defeat in 16, 9 wins in 10 at Victoria Park. Unbeaten in 6 away from home. Will have played all their games before last weekend which means they have the opportunity to pass on all of the pressure to the others left to conclude their season. Will have very few midweek games so lots of rest in between fixtures. Also didn’t play Dover.

Averaging a goal, a game. Relying on a clean sheets. Opponents always in with a chance at 1-0. Less games than everyone else. Drawn 5 of last 10. Yes, the other 5 were victories but 4 of them were 1-0. Gets you as many points as 3-0 but if supporters were allowed in it would be unbelievably stressful! Only a few games against teams who might have very little to play for.

Ryan Oates with 3 in 4 and Luke Molyneux are chipping in with the goalscoring responsibilities but is Luke Armstrong relied on too much? He’s scored 10 in 19 but only 2 in his last 7. I think Hartlepool will draw too many games, but they would need to win every game to be in with a chance of automatic promotion.

Back-to-back wins and clean sheets! Is the confidence creeping back? Best record against promotion hopefuls. Danny Wright’s return might not be too far off. Signed left back, Ryan Law on loan from Plymouth for a month to ease injury issues in that position.

3-point deduction will be a blow. 5 particularly tough games to come and they’ve only scored 12 goals in last 12 games.

How different this may have been with a fit Danny Wright? They’ve been unlucky in that respect. They might just be re-energised since the pressure of being league leaders transferred to Sutton because for weeks the question hanging around their necks was always ‘can Torquay hold on?’. If they can get Wright fully fit, finish top 3 and he regains his finishing touch they’ll be my favourites for promotion via the play-offs.

3 wins in 4 with goals coming from all over the pitch. Exceptional defensive record of late, 3 of their 4 games against title rivals are at home where they are currently 1 defeat in 10.

Not a great record against other top 7 clubs.

You have to presume that the team will only continue to improve given they’re still getting used to their new manager Simon Rusk. I haven’t seen Stockport for a while now, but they’ve signed Paddy Madden on loan from Fleetwood and their attacking options look ridiculous. Too late for automatic but would be a surprise not to see them in the promotion final if they carry on the trajectory they are on.

Games to play v teams with nothing to play for: 3, maybe 4.

They’re 8 unbeaten at home and 3 of their 4 big games are at the Racecourse which will help their cause when it comes to consolidating their playoff spot.

Their next 4 fixtures are against top 4 opponents so could be a really tricky few weeks.

Wrexham have been boosted by the takeover and actually haven’t added to the playing staff like some of their rivals. I think they’re out of the title race if they were ever actually in it.

Their next 4 fixtures are against top 4 opponents and they will have a large bearing on who goes into the last 6 weeks of the season looking good. I don’t actually think Wrexham were meant to go up this year. The foundations are being laid for a big push next season but if they did it this time around it would be a surprise, but a welcome one for them I’m sure!

Games to play v teams with nothing to play for: 4, maybe 5

Those games in hand and a change of leadership can sometimes inspire a good run. Can the instalment of Ian Burchnall as Manager give them a lift?

7 games against top 7 rivals. Will the new manager take a while to get going? Playing Saturday - Tuesday every week will take its toll. The partnership of Inih Effiong and Kyle Wooton didn’t exude the kind of chemistry they’ll need to do anything miraculous. Look too reliant on set plays.

I watched them at home to Yeovil and felt like they had to win or they are out of the race. Subsequently Sutton drew with Stockport and it was quite a good weekend for Notts County even though it was a game destined to be 0-0 but for two unbelievable strikes from distance. We all sensed there was pressure on Neil Ardley and wondered if the forthcoming Trophy game against Hornchurch could be his last?

Having watched the Urchin’s a few times on their amazing cup run I wouldn’t have put it past them to get him the sack, turns out they’re a bit late for that.

So, what about Ian Burchnall? He isn’t familiar to the Vanarama, does he need to be? Time will tell but at this stage of the season he needs to inspire a lift in motivation and find another source of goals for them of goals to fall back on. I think Hornchurch is a horrible first game for him, doesn’t strike the right chord with the fans if they fail to reach Wembley at the hands of a 7th tier outfit

Callum Roberts has been a massive miss and without Kyle Dennis or Wes Thomas they didn’t adequately replace the potential for goals. Their season is harder to predict than anyone else’s because of the manager element but if I had to have a go…

Related Articles
Semi-Final Preview
The eliminators served up some late drama and one fairly big surprise...Read More
Chesterfield or Dagenham?
The window of opportunity is rapidly closing for many teams now with 15th May fast approaching...Read More
Maziar Kouhyar and the Lack of British-Asian Footballers
Maziar Kouhyar. Has anyone else noticed that name pop up lately in the National League North?Read More
This website stores cookies on your computer. These cookies will allow us to remember you and your preferences.
We use this information to improve your browsing experience.
To find out more, please read our
cookie policy.