The National League is a division filled with an eclectic mix of talent – from up and coming youngsters and off-the-radar discoveries, to ex-League players in the Last Chance Saloon and battle-hardened senior professionals. But who would make this season's National League Best XI? It's a contentious subject that divides opinions, but here are our standout stars of 2018/19 so far.

The vastly experienced goalkeeper is closing in on 400 career appearances and has been an assured presence at the back for the Shots since joining the club in 2016. Now 33, Cole offers defensive stability at a time when Gary Waddock's men have lost a number of their star players and are languishing in the lower reaches of the division. A Supporters' Player of the Year award in 2016/17 suggests that Cole's outstanding shot-stopping hasn't gone unnoticed by the Aldershot faithful.

One of two loanees to make the National League Best XI, Hanson first arrived on loan at The Shay last season and impressed enough to be invited back for the 2018/19 campaign. Now a first-team regular for Halifax, the right-back will undoubtedly be attracting the attention of the management at his parent club Bradford City, after a series of eye-catching performances. Hanson is a former winger with scintillating pace and excellent attacking attributes – at just 20 years old he looks set to enjoy a successful career in the EFL over the coming years.

If it's a powerful and marauding full-back that you're after then Jamie Reckord is your man. The 26-year-old has the strength of a central defender but the pace and stamina to get up and down the left flank all day long. With attacking instincts to match his defensive acumen, Reckord has been one of the standout performers for high-flying Solihull Moors this season. The former Ross County man may not be playing at National League level for too much longer if he maintains those high standards for the remainder of the season.

This time last year it looked as though Dan Sweeney's time as a Barnet player was coming to a close. The midfielder had endured a tough start to life at The Hive and was shipped out on loan to National League South side Hampton and Richmond Borough in October 2017. But a change in manager brought about a change in fortunes for the 24-year-old – Graham Westley converted Sweeney to a centre-back, before former coach Martin Allen made him the Bees' captain at the tail end of last season. Comfortable on the ball and with good distribution, he is a vital cog in Barnet's backline and one of this season's standout performers.

A powerful and commanding centre-back who arrived at Meadow Park in the summer, Parry enjoyed an outstanding campaign for former club Dover Athletic last season. The 6ft 4in colossus is a towering presence at the back and a proven performer at this level. Manager Luke Garrard will be hoping that the 24-year-old's continued good form will help propel his side into the play-offs for a second consecutive season. 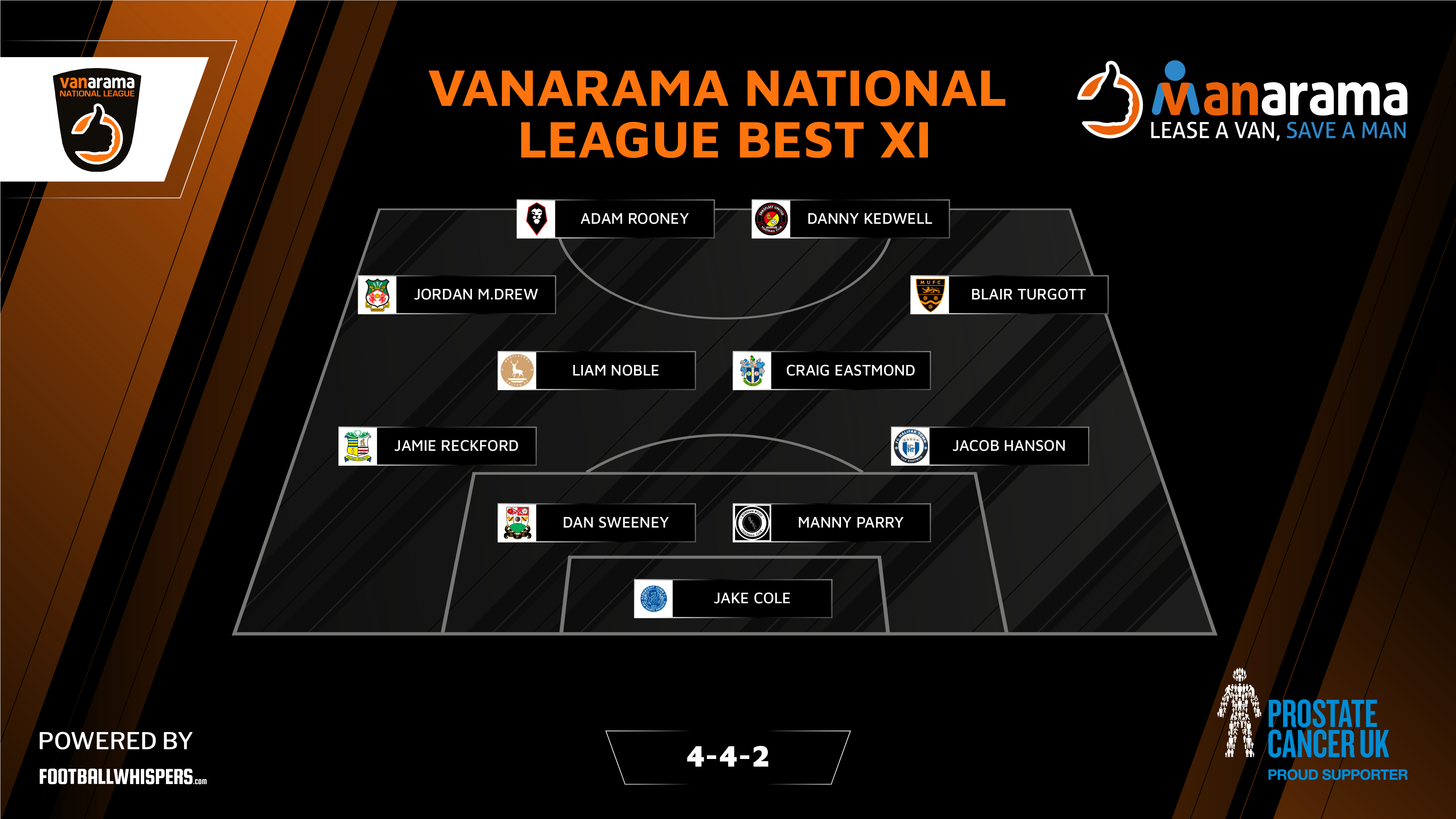 Turgott looks to finally be fulfilling his potential at Maidstone United after a number of false dawns at previous clubs. The former West Ham United youngster has already scored eight goals from midfield this season – an impressive feat in a team that has only found the net 19 times in total and sits in 17th place. Still only 24, Turgott will be hoping to get back into the EFL for a third crack at League football after difficult spells at Leyton Orient and Stevenage earlier in his career.

Versatile forward Maguire-Drew can play up front or on either flank, and has excelled at National League level during two spells on loan in the division. His first was back in 2016/17, which saw him score 16 times in all competitions for Dagenham & Redbridge, picking up the club's Young Player of the Year award in the process. The 21-year-old's latest stint in the fifth tier has started just as successfully, finding the net three times so far this season for promotion chasing Wrexham.

Now back in his native North East, former Sunderland academy graduate Noble appears to be enjoying life at Hartlepool United. The creative midfielder has scored an impressive six goals from the middle of the park in the opening 15 games of the season. That record represents the best goal-scoring form of the 27-year-old's career, in which he has never quite fulfilled his potential despite moments of brilliance. One thing that Noble does know about is how to be successful in the National League, having won promotion from the division with Forest Green Rovers in 2016/17. Hartlepool fans will be hoping that he can achieve similar success with his current club.

Eastmond is a metronomic deep-lying playmaker who has been at the heart if Sutton United's midfield since arriving at Gander Green Lane in 2015. The 27-year-old was once a promising youngster at Arsenal – winning the FA Youth Cup and making ten appearances for the Gunners, with four of those coming in the Premier League. While Eastmond may not have made the grade at the Emirates Stadium, he is a star at National League level and has made over 100 appearances in the Amber and Chocolate of Sutton United – helping them to third place last season.

While other strikers may have scored more goals this season, there can be few forwards who make as much of a contribution to their team's overall play as Danny Kedwell. The physical target man is a master at holding up the ball in the final third, using all his 35 years of experience to find space and evade defenders. His goal record isn't bad either – the talismanic striker has scored over 200 goals in his career and has struck five times so far this campaign.

It's impossible to look past the division's leading scorer Rooney, who has notched an incredible 12 times in 15 league fixtures to date. Perhaps that goal record shouldn't be surprising – the Irishman arrived at Moor Lane in the summer on a rumoured £4,000-a-week deal, having scored 88 times in 197 games for Scottish side Aberdeen. With Salford currently topping league and with the most goals scored in the fifth tier, you can't help but wonder if this could be a record-breaking season for the 30-year-old poacher.

By Will Evans, Football Whispers