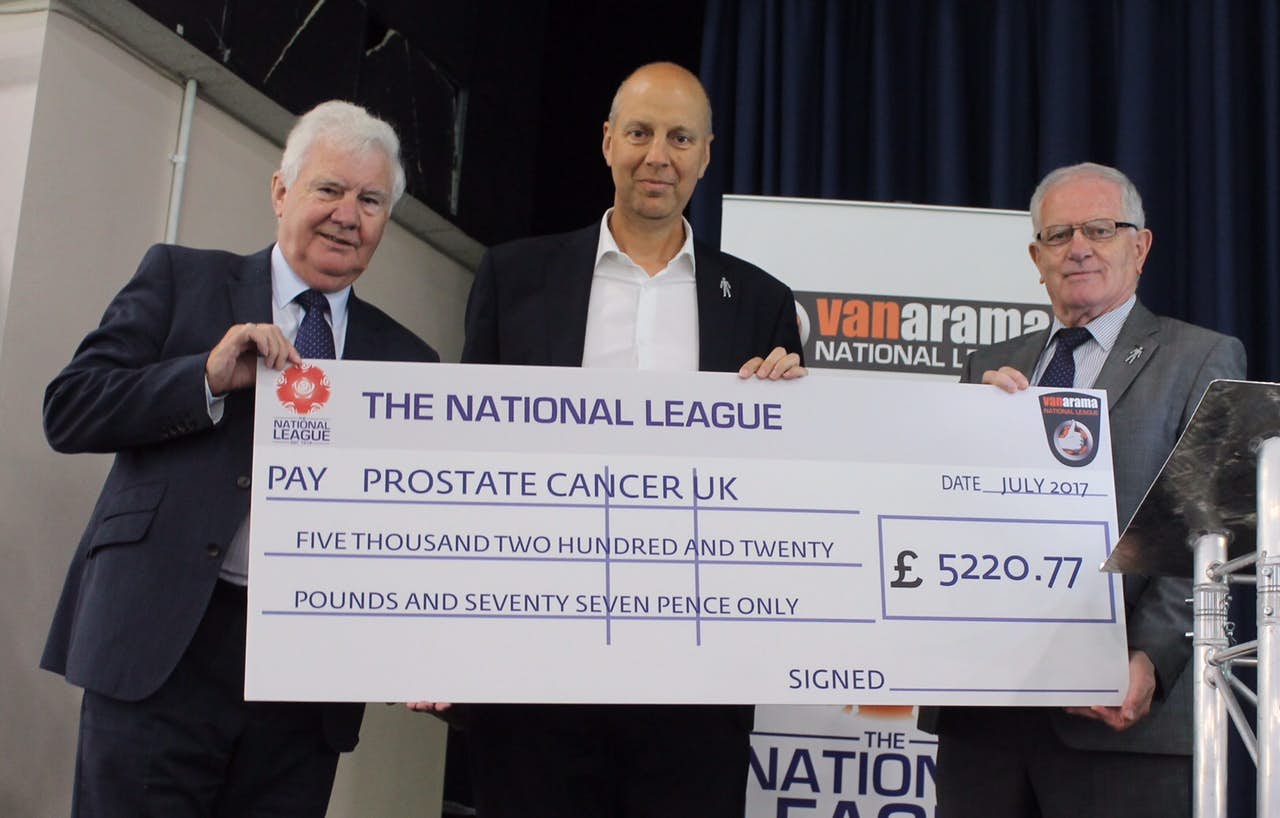 The Vanarama National League has donated £5,220 to leading men's charity Prostate Cancer UK as they continue to promote awareness of a disease that affects one in eight men.

The League along with sponsors Vanarama have driven donations for Prostate Cancer UK through a variety of activities including the Vanarama National League Promotion Final at Wembley, a League Gala Awards evening and by joining Sky Sports presenter Jeff Stelling on Day Three of his epic March for Men in June.

The generous donation was presented to the charity at a pre-season club members meeting where delegates from the National League and National League North and National League South received an inspirational team-talk from ultra-marathon runner Kevin Webber, who was diagnosed with terminal prostate cancer in August 2014 and who also completed 400 miles alongside Jeff Stelling.

Inspired by men like Kevin and shocked by the startling figures that one man dies every hour from this disease, Vanarama and the National League has committed to continue working alongside the charity in the new season, to support their work and help prostate cancer become a disease the next generation of men and their families need not fear.

Brian Barwick, Chairman of The National League said: "This has been a terrific effort by all involved, particularly those who joined Jeff Stelling's March for Men from both the League and Vanarama.

"We're delighted to collectively play our part in supporting Prostate Cancer UK, to raise funds and awareness of the most common cancer in men.

"This season we'll be continuing our relationship with the charity and look forward to drawing more attention to the excellent work they do across the country. We thank all the football fans who have already been so supportive and ask that they continue to get behind a cause which affects so many men and their families."

James Beeby, Director of Fundraising at Prostate Cancer UK said: "We are thrilled that The National League and their sponsors Vanarama have chosen to support Prostate Cancer UK. As well as raising funds through their activities last season, they're also raising crucial awareness of a disease which kills one man every hour.

"Prostate Cancer UK is leading the fight against this injustice, funding ground-breaking research to stop prostate cancer being a killer. The more men we can reach the better so we thank the Vanarama National League for supporting us and helping us beat this disease."

Above is a photograph of the presentation of the cheque which Kevin Webber accepted on behalf of Prostate Cancer UK. He is flanked by Charles Clapham the Vice Chairman (left) and Colin Peake the Operational Support Director (right) from The National League.

Many people are unaware that prostate cancer is the most common cancer in men. It's a huge issue that cannot be ignored. In 2017 one man every hour will die from prostate cancer in the UK. That's more than 11,000 men this year. Based on current trends, if we ignore prostate cancer and do nothing, this number will rise to over 14,500 men a year by 2026.