The Vanarama Promotion Final is fast approaching, and it’s been a play-offs to remember so far. The Notts County win at Meadow Lane over Chesterfield will live long in the memory for the atmosphere and drama. Who could have predicted Bromley defending badly under Woodman despite a spirited 2nd half performance? Or how Torquay kept Danny Wright’s return to fitness so low key? Or that unorthodox deployment of centre-half Kyle Cameron which came off a treat?!

The Stockport v Hartlepool game didn’t catch fire in the same way and for me showed the fans just how much football has changed while they’ve been away. It was far more ‘strategic’ than the other games we saw, with both sides limited to few chances because of the joint reluctance to commit bodies forward (certainly in the 1st half) for fear of being caught out of shape and left vulnerable.

Now there’s no obligation for a side to play a certain way when there is so much at stake, but what I will say is would Stockport fans understand if their team (which is the best side in the league on paper) set out to play in such a safe methodical way despite home advantage if it was more than just a one off? We know the proverbial handbrake was let off against less challenging opposition or they wouldn’t have managed 3rd place finish, nor would they have scored 69 goals, which was only bettered by the champions. 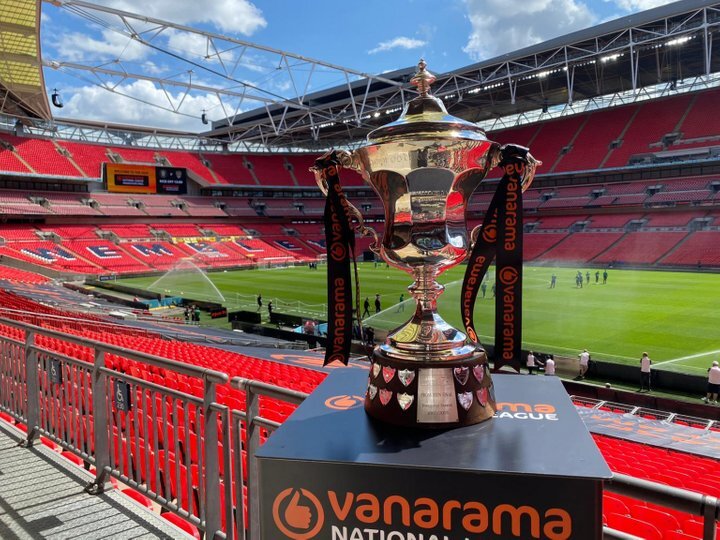 I can only judge by what I see though, and the last 3 games I watched Stockport in (all at Edgeley) were the 0-0 with Bromley, the 2-2 with Torquay and the Hartlepool defeat, so there was definitely a theme of being hard to beat and they did end up being the league’s tightest defence. That said, you can’t argue against a very impressive 18 game unbeaten run, but If you draw too many the points tally can be less impressive than the label ‘unbeaten’ suggests.

You can see by the amount of games drawn under the promising Simon Rusk that the acceptance of a point instead of a win at all cost mentality may have cost them being serious contenders for automatic promotion this time around. It may also have crept into his thinking when deciding how to go about beating Hartlepool in this knockout format, where they did little to bring the crowd to their feet.

Football is a game of moments and if Paddy Madden scores with that early first half chance we could be talking about a very different outcome, because once ahead they rarely lose. With slightly less pragmatism they may or may not have achieved a better outcome, but one thing for sure is they will definitely be competing again next year and I can’t wait to see how they strengthen that squad in the summer.

Let’s credit Hartlepool for that win though. Having seen two very different approaches to their play-off games so far, they look like a side who can adapt brilliantly to whatever Challinor wants them to do. Not many teams have made it to the final when playing that extra game but surprise, surprise, Challinor has now done it twice.

Most of you will have noticed how the two managers in the promotion final, Johnson and Challinor, have something in common? They’re the most experienced managers out of the 6 who started in contention. I wonder how much of that is a coincidence? There hasn’t been a big gap in quality between any of the sides, but maybe in this year’s case that experience has helped their teams over the line?

You might say home advantage and a contentious (i.e. wrong) penalty decision were the key components to Torquay’s win, but the use of Kyle Cameron in a wide position dropping into more advanced spaces when there was a chance to hit him and play off was a tactic born out of the necessity of not having their star striker available for half the season. To then combine that with Wright’s timely reappearance on the team sheet was something you had to applaud as it asked many questions of the Notts County defence.

Dave Challinor has got it right twice. Playing with the intensity against Bromley that overwhelmed a usually solid Bromley defence, rendering the game all but won before half time in front of 1700 of their own fans, and then the patient away display suppressing the Stockport fans early on and keeping it that way before snatching the game with a speculative effort while extra time looked inevitable was exactly how it would need to be done against a side that hadn’t lost since 6th March.

For me the promotion final represents the meeting of two great teams full of belief who are going to be led out by two bosses who both deserve to manage their sides in the Football League. The problem is there’s only room for one of them and I can’t wait to see how they approach the game and ultimately which of them wins the tactical battle.

We know all about that 5-0 Torquay thrashing in October, but Hartlepool got their revenge with a 1-0 win at Plainmoor more recently in March, and I was lucky enough to be at both. Again, Torquay didn’t have Wright available to them that day and I’ve often talked about him being the difference, which certainly proved to be the case against Notts County.

Hartlepool are unbeaten in the 24 league games that they have scored first in and the man most likely to do the damage is Rhys Oates who has scored 9 goals in as many appearances, the latest being the winner against Stockport on Sunday. Torquay are unbeaten in their last 14 coming into this one and love scoring late goals, winning 12 matches this season with goals scored after the 80th minute, including those two late goals in extra time against County in the semi-final.

Will Gary Johnson achieve his 3rd promotion from the National League or will Dave Challinor go one better than against Salford with Fylde at Wembley in 2019? I’ve always said Torquay are the best side in the Vanarama when Danny Wright is fit so if I really had to choose, I think Torquay do it. I’ve got a feeling this one will be decided on penalties though!