It’s just over 2 years since Volkswagen withdrew the Amarok pickup truck from the UK market. In the months since, Nissan, Mercedes-Benz, Fiat and Mitsubishi have all also decided to cease selling their pickups over here. But now the Amarok is back - platform sharing as it does with the new Ford Ranger. Vanarama Commercial Vehicle Expert Tom Roberts reports.

Despite its surprising withdrawal from the UK market, it soon became apparent that the departure of the Amarok would be temporary. When the German company announced their partnership with Ford, to jointly develop future commercial vehicles, a pickup was clearly marked on the roadmap. Although also to be sold as a Ford Ranger, Volkswagen are keen to ensure that the Amarok, while sharing the same platform, would have its own identity.

The global reveal has only recently taken place and we now know more about VW’s contender in the 4x4 pickup sector. The truck has been designed in Australia and Germany, but will be built in South Africa, alongside the Ford Ranger. Here’s what it will provide.

What Improvements Will The New Volkswagen Amarok Offer? 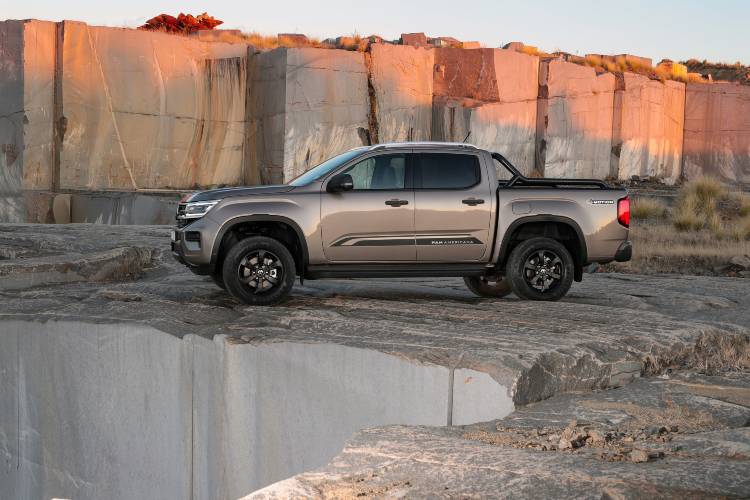 From the outside, Volkswagen's influence is clear, with the up-to-date corporate front grille and headlights. The rear tailgate hosts a bold Amarok logo stretching almost the full width. A key feature is that, although the truck is 96mm longer than the discontinued model, the wheelbase has gained 173mm in length. This gives 2 real benefits:

Another improvement for those taking their Amarok to extremes, the 500mm wading depth of the old Amarok has been massively improved and the truck now copes with 800mm of water.

What Body Types Will Be Available On The New Amarok?

The Amarok will (in the UK market) be sold purely as a 4x4, and in single or double cab form with no ‘super’, ‘king’ or ‘extra cab’ versions being offered.

What Engines Will The New Amarok Be Available With?

Although Volkswagen has announced a number of engine options for Amarok, not all of these are likely to make it to our shores. Most likely are the 170PS and 204PS 2.0-litre diesel units, together with a 3.0-litre V6 unit producing a healthy 241PS. Unfortunately, it seems doubtful that we’ll get the 302PS petrol engine. Gearboxes will be either 6-speed manual, or one of either a 6 or 10-speed automatic transmission, depending on engine choice.

What Trim Levels Will The New Amarok Be Available In?

Although full details of the trim levels for the UK have yet to be announced, we do know that all models will have a dash dominated by digital screens. In fact, range-topping models will have a 12-inch digital dash alongside a 12-inch multimedia touchscreen in the centre. These displays are fully customisable, so the navigation screen can be displayed directly in front of the driver if required. There’s a top-notch Harman Kardon sound system built into the high end models too.

Volkswagen stresses that great care has been taken in ensuring that the blend of digital and mechanical controls has been made with ergonomics in mind and being intuitive to use. The cab has an upmarket, quality feel to it with new seating and materials together with leather detailing in some versions.

What Drive Modes Will The New Amarok Offer Drivers?

6 drive modes will allow the driver to configure the truck for the optimum performance in a wide range of driving conditions, and VW states that there are 20 new driver assist systems in the new Amarok. There’s lane keeping assistance, road sign recognition (which can be set in conjunction with the adaptive cruise control) and LED matrix headlights providing excellent visibility at night.

What Payload Can The New Amarok Carry?

Payload on the new Amarok is improved - the truck's capacity of around 1160kgs is comfortably over the UK’s critical 1000kg threshold to class it as a commercial vehicle. Vitally, for some owners, the pickup also has a 3500kg towing capacity.

When Will The New Amarok Launch?

Volkswagen says that the truck will launch in some markets by the end of 2022 – I reckon the UK will probably be included in that, so keep an eye on the Vanarama website later this year where we’ll no doubt be offering the best lease deals on the new Volkswagen Amarok!

Related Articles
Mercedes-Benz eSprinter Review
Tom Roberts takes a look as Mercedes introduce their newest electric addition, the e-Sprinter...Read More
Renault Announces All-New Kangoo and Kangoo E-Tech
We’ve been waiting quite a while for this – the full details for Renault’s all-new Kangoo...Read More
Peugeot E-Boxer: In-Depth Electric Large Van Review
Has Stellantis managed to produce a fully-electric van that will appeal to its loyal customer base?Read More
This website stores cookies on your computer. These cookies will allow us to remember you and your preferences.
We use this information to improve your browsing experience.
To find out more, please read our
cookie policy.