Peugeot e-Partner Lease Deals & Everything You Need To Know

The Peugeot Partner – along with its almost identical sibling the Citroen Berlingo - has earned its ‘legendary’ status in the commercial vehicle world through solid performance and practicality. And now, the all electric Peugeot e-Partner brings the Peugeot small van up to date with some class-leading features. Vanarama Van Expert Tom Roberts takes a deep dive into this superb small electric van.

You can trace the Peugeot Partner back to the mid 1990s, when the first version was launched. Although a fairly basic van with few of the creature comforts and tech that we’re now accustomed to, it soon became a hit with those who wanted a van with a small footprint, making it easy to manoeuvre around towns and cities, but which offered a decent loadspace and payload. Its frugal running costs pretty much guaranteed the success of the van with small businesses and fleets alike.

Fast forward a couple of decades and in the intervening years there have been a fair few facelifts - the latest version being launched in 2019 with the all-electric e-Partner arriving during 2021. A little known fact is that the Partner has been offered in battery electric form twice before, once very early in its lifespan, the second time as recently as 2012, so it’s something of a pioneer. Although offering a respectable (at the time) range of 105 miles, it didn’t sell in large numbers and was quietly withdrawn – possibly a combination of being a little too expensive and reluctance by the van operators of the time to embrace the new technology. To be fair to the French company, at a similar time Ford also failed to make inroads with an electric version of the Connect - sales were poor and then the Canadian company responsible for the conversion went bust, sealing the vans fate.

What Body Styles & Trim Levels Are Available On The Peugeot e-Partner?

Before we get down into the details, let’s highlight a few key facts about the e-Partner. It’s what you’d probably call a small or ‘light’ van, but that’s a bit misleading because it’s bigger than the smallest vans (think Renault Zoe Van, or the now-discontinued Ford Fiesta Van) and it can carry a healthy payload - more on that later.

Some manufacturers restrict the availability of the electric versions of their vans, so you don’t get the choice of body styles, weights or trim levels. That’s not the case with Peugeot, who don’t want the electric van customer to be a poor relation to car drivers and have to contend with a van which isn’t ideal. Keeping it super topline, here are your choices in body style and trim on the e-Partner: 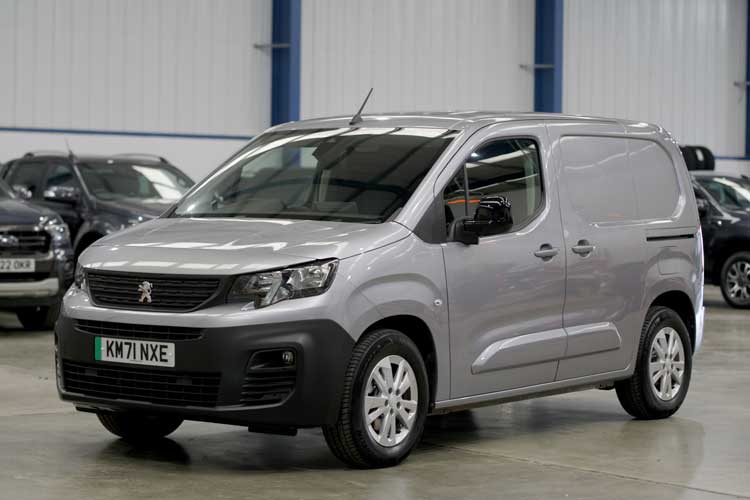 How Is The Peugeot e-Partner Powered?

Under the bonnet, the e-Partner has a single electric motor which drives the front wheels at a power output of 100kW. To put that into perspective, it’s equivalent to 136hp and, bearing in mind that the very first Peugeot Partner vans had engines that produced less than half that amount of power, this van really is fast. In fact, it’s got more oomph than that family hatchback or small SUV currently sat in your driveway. It’s not just the horsepower though – the beauty of electric vans is that the torque is available instantly giving you 260nm of pulling power the instant you put your foot down - even if you’re fully laden.

How Fast Is The Peugeot e-Partner?

Unladen, you’ll get from 0-60mph in just 11.2 seconds and the van has a top speed of 84mph. Some electric vans have more stringent speed restrictions in place to optimise the range, but Peugeot gives the driver the option to get places a little more quickly when required - at the expense of range between charges.

There are 3 selectable drive modes, Eco, Normal and Power. Eco cuts the available power back to around 81hp and adjusts the air conditioning to a more power-efficient setting. If you need ultimate range, this is where you need to be. Normal provides around 109hp and will be selected automatically by default when you start driving. Power mode provides maximum performance, but if you use it your range will be reduced from the outset. 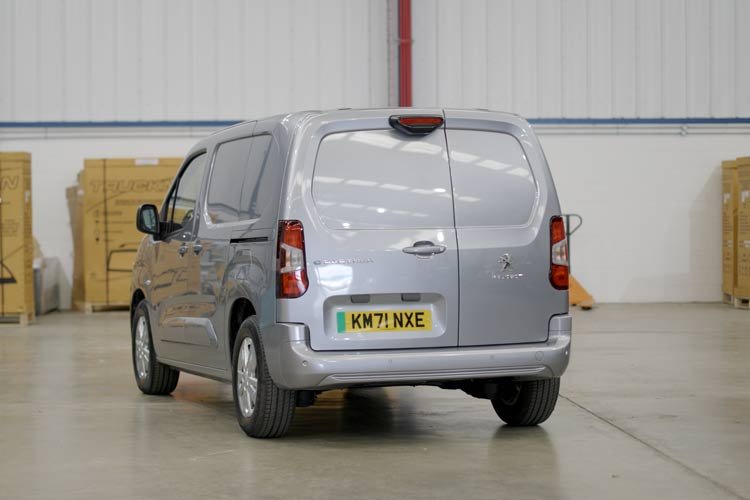 How Long Does It Take To Charge The Peugeot e-Partner?

The van has a single Lithium-ion battery option, a 50kWh pack which is mounted under the van without any detrimental effect to the load area dimensions. If you’ve got yourself a 7.4kW wallbox at home, you’ll get a full charge in around 7 hours 30 minutes. If you have to rely on a standard 3-pin household socket, you’ll need to wait a lengthy and probably impractical 31 hours before you’re back up to 100%.

The e-Partner offers a fast charge facility as standard. If you connect to a public 100kW rapid charger, you’ll get yourself back up to 80% of charge from zero in just 30 minutes.

What Is The Range Of The Peugeot e-Partner?

Official WLTP testing allows the Peugeot e-Partner to quote a range of up to 170 miles, more than enough for the vast majority of van users who might only need to charge up every 2 or 3 days of typical use. There are a few caveats – this figure is the optimum and, realistically, you’re going to find it a challenge to achieve it. Why? The weight of the load you’re carrying and the weather conditions (especially temperature) are just 2 things that will bring your range down, and the official figure assumes that you have ‘pre-conditioned’ the cab. This means that before driving away you’ve either cooled it using the air conditioning, or warmed it with the cab heater while the van is still connected to a charger. Even so, for comparison purposes, the quoted WLTP range is really useful. Have a look at some of the competition; you’ll soon see that the e-Partner is up there with the best when it comes to range.

How Big Is The Cargo Area On The Peugeot e-Partner?

The e-Partner van is small-ish on the outside, but open those rear and side doors  (you get 2 of those on the Long version) and you’ll find a decent cargo area, more than enough for many small businesses. The Standard van has a load length of 1817mm which helps to offer a load volume of 3.3 cubic metres. Opt for the Long version and the 2167mm of length translates into a very healthy volume of 3.8 cubic metres. Both vans have a maximum load width of 1550mm (1229mm between the wheel arches) and a load height of 1236mm. There’s also a Multi-Flex folding seat/load-through bulkhead facility on all models. Use this on the Long van and you’ll get a length of 3.44 metres inside. 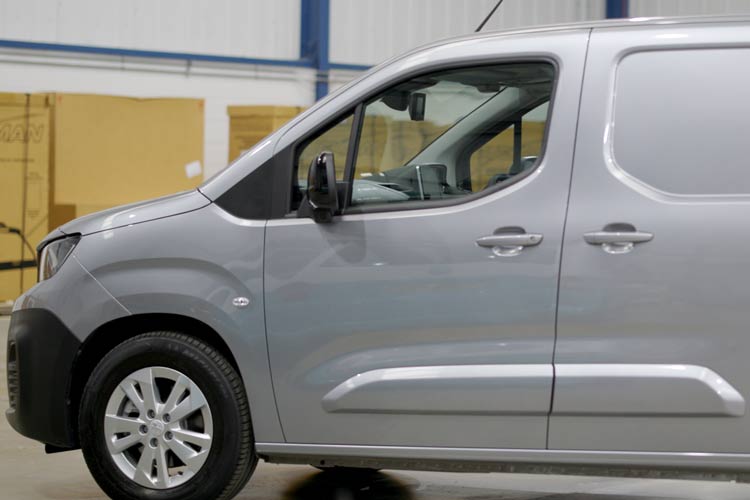 What Payload Can The Peugeot e-Partner Carry?

The Crewvan (only available in Long) adds 3 folding rear seats and a single front passenger seat to provide excellent flexibility when having to balance loads with the need to carry people.

What Options Are Available On The Peugeot e-Partner?

The e-Partner Professional Premium has a trim level that some vans don’t achieve until you get to the top of the range. You get air conditioning, cruise control, an 8-inch colour touchscreen housing not just a DAB radio, but the all important Apple CarPlay and Android Auto smartphone integration too. If that’s not enough, throw into the mix an alarm, electric folding mirrors, the Multi-Flex folding passenger seat and load-through bulkhead facility. You’ll also get an acoustic vehicle alerting system, important on an almost silent van where pedestrians are unlikely to hear you reversing.

Asphalt Premium adds 16-inch alloy wheels, body-coloured bumpers and side rubbing strips, satellite navigation in a larger 10-inch display, front and rear parking sensors, and passenger side and rear cameras providing’ tri-action’ rear and nearside visibility via a 5-inch screen integrated into display which hangs where a rear-view mirror would sit on a normal vehicle.

Although the e-Partner boasts 3 seats in the front, it’s probably worth pointing out that the centre seat is only suitable for occasional use, and preferably by someone who isn’t overly large.

How Much Does It Cost To Run A Peugeot e-Partner?

A tricky question with an electric van – it depends so much on the cost of electricity and how much you rely on the more expensive public fast chargers. Servicing costs are usually lower than an equivalent diesel van, and the e-Partner needs one of these every 25,000 miles or 2 years, whichever comes first. There’s a good warranty - 3 years or 60,000 miles for the van, but the battery is guaranteed to keep a minimum of 70% of its original capacity for 8 years or 100,000 miles.

Where Can I Lease A Peugeot e-Partner?