The new pickup market has been turned upside down in the last year or so. Want a new Mercedes-Benz X-Class, a Nissan Navara, a Fiat Fullback or a Mitsubishi L200? Sadly, you’re out of luck as all these fine pickup trucks have been discontinued in the UK. Volkswagen have also paused sales of the Amarok prior to the launch of its replacement in 2022 which will essentially be a re-badged Ford Ranger (or the other way round, if you prefer!).

Worry not though, there are still some excellent pickups available and some of these have had very recent facelifts. In this guide, Vanarama Van Expert Tim Cattlin takes a look at The Best Pickup Trucks 2021. 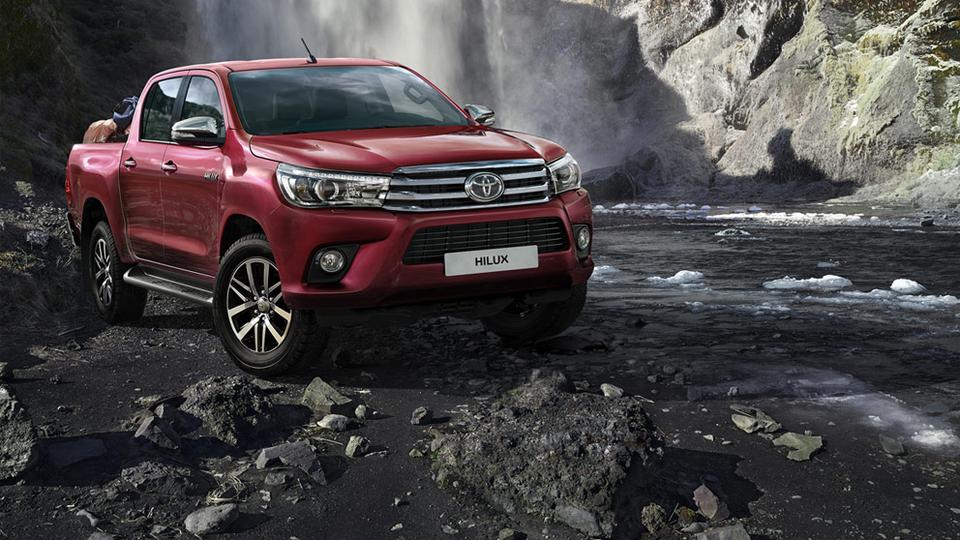 Think of a pickup and there’s a pretty good chance the Toyota Hilux will spring to mind. It’s been around for ages (since 1968, to be precise) and has a great reputation for being a tough, rugged and capable off-roader. 2021 saw the introduction of the latest generation, with lots of changes inside and out.

The biggie has to be the availability of a 204hp engine. If there had previously been any criticism of the Hilux it was usually around the lack of availability of a power unit with some real grunt. Although the 2.4 litre 150hp unit was adequate for many users, rival manufacturers all offered something meatier. Toyota have definitely put that concern well and truly to bed, the engine producing a whopping 500nm (Newton Metres) of torque, especially useful when using the Hilux’s 3500kg towing capacity. The lower powered diesel engine is still available for those who don’t need the additional 54hp.

For the truck to be considered as a commercial vehicle for taxation purposes, it’s important that the payload is over 1000kgs. Most models of Hilux meet this requirement with ease, but don’t forget that if you decide to fit a permanent hard top to the load area, that could tip the figure below the magic tonne – and yes, it does count.

The Hilux isn’t just available as a double cab, you can get it as a single cab (which has the benefit of a longer load bed), and an ‘Extra’ cab, which has a small rear passenger section accessed through half width doors.

On the outside, the truck has the now almost mandatory big, aggressive, hexagonal front grille. Other refinements depend on which trim level you choose. There are 4 options, the Active, Icon, Invincible and the range topping Invincible X, the top models sporting some very snazzy alloy wheels. The cab is very ‘car like’ with an 8” multimedia screen in most models and air conditioning is standard throughout the range. Topping the pickup sales charts regularly, the success of the Ranger keeps on rolling on. It’s no surprise really, Ford are never content to rest on their laurels and the truck gets regular makeovers to keep it at least up to the competition, and often ahead of it. Although the last major update was in 2019, there were some additional refinements added in 2021. The all-new Ranger has been spotted on test and, as mentioned previously, is the product of a joint venture with Volkswagen. We won’t see that for quite a while yet though.

Available in regular cab, super cab and the more familiar double cab form, there’s a Ranger for every job. And when it comes to trim levels, Ford don’t mess about, you’ve the choice of the XL, XLT, Wolftrak (limited edition), Limited, Wildtrak, Stormtrak (another special edition), MS-RT and the ultimate Ranger, the Raptor. All of these ‘series’ each add additional specification, including driver aids and safety tech.

Most Rangers have 4-wheel drive as standard, and recent changes to engine availability mean that all are now powered by the same 2.0 litre ’EcoBlue’ diesel unit in a choice of 130PS, 170PS and 213PS outputs. 6-speed manual and 10-speed automatic gearboxes are offered, although you can’t have the auto on some of the more basic models.

Just as with the Hilux, the cab interior is intended to make the truck feel as car-like as possible and is made from high quality materials. Ford now include their FordPass Connect on board modem which, in conjunction with a smartphone app allows for remote monitoring and some other telematic functions.

Payloads are (with 1 notable exception) safely over the 1000kg threshold, and that all important towing weight is 3500kgs with the exception of the XL and Raptor. It’s really important to bear in mind that the payload of Raptor (just 640kgs) means that it’s not classed as a commercial vehicle for taxation purposes, and so VAT would not normally be reclaimable for a business user. A nasty shock if you’re not aware before signing the order form. Prior to the introduction of the D-Max in 2012, Isuzu had relatively modest success with its predecessor, the Rodeo. There’s little doubt that the importers and dealers alike were pleasantly surprised when sales rocketed after the launch of the new model.

Popular especially with the agricultural community who need a hard working, no nonsense truck, Isuzu fully intends to take advantage of the departure of the likes of Mitsubishi and Nissan from the UK market, and this will no doubt be helped by the launch of a major facelifted D-Max in 2020.

Isuzu have split the D-Max into 3 ranges. ‘Business’ and its Utility derivative is aimed at the workhorse market where the focus is on capability rather than bling. ‘All-Purpose’ sees the mid range DL20 and DL40 models (DL stands for Differential Lock – a feature offering more grip in tricky off road conditions) where you’ll get some nice alloy wheels and chrome on the exterior and some extra bits of spec in the cab. ‘Adventure’ designation has the range topping V-Cross, with the top level of equipment and gun metal exterior flourishes.

Whether the prospective pickup owner is working in a forest all day, towing a trailer, or someone who rarely carries loads and is more likely to be seen in an office car park, engines are all important. When Isuzu announced that their units would be downsized to 1.9 litres many, particularly in the farming sector who generally see engine capacity as the be all and end all had their loyalty to Isuzu fully tested. In practice though, the 164PS unit (that’s the only option) performs more than adequately for most, and the 0-60mph time of 12.7 seconds and top speed of 112mph are firm indicators that the D-Max is no slouch. The old automatic gearbox which wasn’t the best has been replaced by a much better and smoother unit.

A load bay length of 1495mm on the double cab version (single and extended cabs are also offered) is competitive and with payloads around 1100kgs depending on spec D-Max is safely inside the 1000kg tax threshold. The almost mandatory 3500kg towing capacity is present too, especially important for the agricultural community. The Ssangyong Musso, a Korean manufactured truck isn’t a common sight on our roads, buyers of pickup trucks are often swayed by the manufacturers badge and, let’s be honest, Ssangyong as a brand isn’t one most people would normally aspire to.

It shouldn’t be overlooked however and many independent reviews have suggested that the Musso is a very capable truck indeed, especially off road. The 2021 Commercial Vehicle Show saw the unveiling of a facelifted Musso, with a very bold new front end which must have one of the largest grilles we’ve ever seen!

There’s just the 1 engine option, a 2.2 litre diesel unit but, with a very respectable output of 181PS it should have more than enough power for most owners. It’s only available as a double cab but, uniquely in the UK pickup market, 2 wheelbases are offered. The standard vehicle has a load bed length of 1300mm which isn’t exactly class leading (in fact, it’s the shortest by a long way), but the LWB Rhino counters this shortfall with a 1610mm load length, the nearest competitor in double cab form being the Ford Ranger with 1549mm.

There are 4 trim levels, all with increasing levels of equipment. The EX is, according to the brochure, a ‘tough, no nonsense workhorse’. The Rebel and Saracen models follow, with the ultimate Musso being the Rhino, which is only available as a LWB truck.

Maximum payload on the manual transmission, short wheelbase Musso only just scrapes over the plus 1000kg threshold at 1050kgs and you’ll have to choose an automatic to get the crucial 3500kgs towing capacity, the manual versions just offering 3200kgs.

So, although choice is a little more restricted than in the past, there are some great pickup trucks out there with more product developments on the horizon. Check out Vanarama’s fabulous lease deals on pick-ups here.