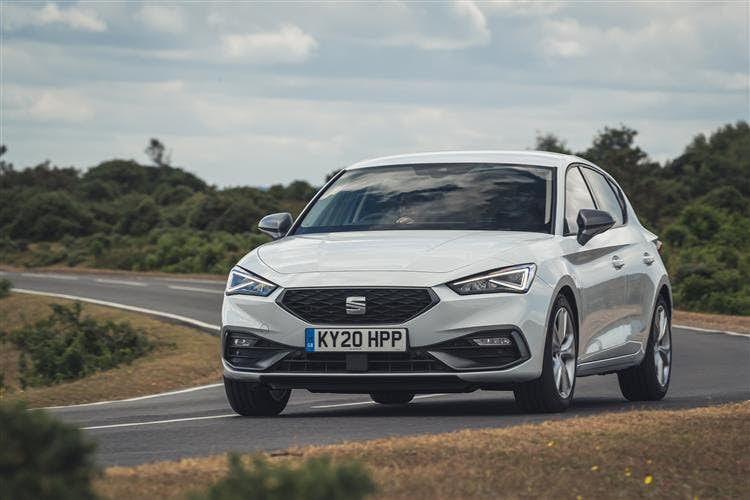 Why Lease the SEAT Leon Hatchback?

SEAT, in case you didn't know, is supposed to be an emotive, 'Latin' kind of brand, a kind of 'Iberian Alfa Romeo'. Hence the passionate marketing, the rallying success and the World Touring Car Championship trophies. Customers though, remain a little unconvinced, especially in mainland Europe where SEAT sales are faltering. But not so in the UK. Sales are soaring on these shores and the Leon model range has always represented much of the reason why, ever since the MK1 version's original introduction in 1998 and its swoopy second generation successor's arrival in 2005. Together with the Ibiza supermini, the Leon is SEAT to British buyers. People who'll have to adjust their thinking a little with this third generation version. For one thing, it's not just a five-door hatch any more: you can also now get it as an estate and a sporty coupe. For another, there's now equipment in this car that you previously simply wouldn't have associated with a 'value' brand like SEAT. A 'democratisation' of luxury that the company hopes will change your whole perception of what a Focus-sized family hatchback can actually be. Sounds promising then. Let's put it to the test.

SEATs always tend to feel a bit more sporty than the Volkswagens they're based upon and this one is no different. Indeed, the pokier variants further up the range really relish a good flogging. This car is based on the same MQB platform that undergirds VW's Golf, Audi's A3 and Skoda's Octavia - and uses most of the same engines as those cars too. These include the 105PS 1.6-litre TDI diesel and 1.2-litre TSI petrol entry-level models. Then above then, petrol TSI versions - a 1.4 140PS unit and a 1.8 180PS variant. There's also a 150PS 2.0-litre TDI diesel. Cupra versions get the 2.0 TSI petrol engine from the Golf GTI, but in an uprated form developing either 265 or 280PS. All Leons, even the humbler ones, get a clever XDS electronic differential lock, there to help you get the power down more quickly out of tight corners, dialing out understeer and firing you from bend to bend. Something you'll feel minded to enjoy pretty often in the sportiest variants, the aforementioned Cupra and the FR 2.0 TDI 184PS, a car able to match 65mpg economy with 140mph performance. Go for a model with more than 150PS and it'll also come with multilink rear suspension for a better ride and handling balance: it's a pity that more Leon variants don't get this.

SEAT stylists say that they used a special tool to design this car: light. Every day, the prototype was wheeled outside so the team could see how the reflections and highlights looked under the clear Spanish sun. The end result, the purest interpretation yet of the company's 'arrow head' design philosophy, is a reward for such attention to detail, a decisive, sharply drawn shape with a clean, crisp, racy look that's especially eye-catching when dressed to kill. Here, we've got the five-door hatch which, unlike the MK2 model, no longer has to try and look like a sporty 3-door coupe by building in its rear door handles into the rear windows. That's because the Leon range now offers an SC Coupe bodystyle, as well as a capacious ST estate. All get the same beady-eyed front end with a set of angular Audi-style headlamps either side of the usual trapezoidal SEAT grille, lights that can for the first time in this segment be specified in full LED form. A slightly longer wheelbase means that there's more interior room than there was in the second generation Leon, while out back, there's a decently sized 380-litre boot 39-litres bigger than before. And up front? Well the driving position's excellent but what those familiar with previous generation versions of this car will most notice is the massively improved cabin quality. The best that the Volkswagen Group can do is naturally reserved for VW's Golf and the upwardly mobile Audi A3 but this is certainly a giant leap forward for SEAT.

Pricing is pretty much par for the course in the family hatchback segment, which means that you can expect to pay somewhere in the £16,000 to £23,000 bracket for mainstream models. Hardly mainstream are the top Cupra 5-door and SC models which offer either 265 or 280PS. There's a small premium over an ordinary five-door if you want the ST estate but SC coupe customers actually get a model-for-model saving of £300 over equivalent versions of the five-door. As with most cars of this kind, the premium to go from petrol power to a comparably performing diesel engine is quite great - around £1,700 to go from a 105PS 1.2 TSI petrol to a 105PS 1.6 TDI diesel - so make sure that your annual mileage really is high enough to justify black pump motoring. If, having considered all of this, you conclude that it is a Leon that you really want, then whichever five-door hatch, three-door SC coupe or five-door ST estate bodystyle you choose with whichever engine - 1.2, 1.4, 1.8 or 2.0-litre petrol TSI or 1.6 or 2.0-litre TDI diesel - you're going to want a decent level of standard equipment for the deal to be swung. And by current class standards, this Leon doesn't do too badly here. All variants get air conditioning, powered front windows, powered and heated mirrors, tyre pressure monitoring, tinted glass, headlamps that stay on to guide you to your front door, an alarm, a height-adjustable driver's seat and a 5-inch EASYCONNECT infotainment touch screen via which you can control Bluetooth connectivity, a vehicle trip computer and a six-speaker stereo with steering wheel-mounted controls, plus ports for USB and AUX-in and an SD card slot.

It's not easy to cut back the weight of a modern family hatchback in a market where buyers want their cars to be safer and more heavily equipped. Yet thanks to the installation of the Volkswagen Group's MQB platform, this SEAT manages to be up to 100kgs lighter than its immediate predecessor. On top of that, it boasts a range of engines that are said to be on average 22% more fuel and emissions-efficient than those in the second generation Leon range. This is chiefly thanks to the standard installation of a Start/Stop system that cuts the engine when you don't need it, stuck in traffic or waiting at the lights. Plus an Energy Recovery system that stores brake energy usually lost as heat and uses it to help power the car's electrical systems, ultimately preserving fuel. All part of what SEAT calls 'Ecomotive technology'. The ultimate expression of this can be found in the fully-fledged 1.6 TDI diesel 110PS Ecomotive model, in which guise this car is capable of returning nearly 90mpg on the combined cycle and hybrid-like CO2 emissions of well under 90g/km. Yes really. But you don't have to push the Ecomotive boat out to get super-frugal figures. Even a standard 1.6 TDI 105PS Leon manages 74.3mpg on the combined cycle and 99g/km of CO2 - which means a theoretical driving range of over 800 miles. While the 2.0 TDI 150PS variant we tried isn't far behind on 68.9mpg and 106g/km.

This Leon marks a fresh chapter in SEAT history. Redesigned from the ground up, it's more confident, more dynamic and filled with bright ideas. There's a wider range of bodystyles, a more efficient range of engines and hi-tech that not only lies under the skin but also sits within the cabin where you can appreciate it every day. It's all beautifully functional. Whether there really is 'latin spirit in every one' is another question of course. In the case of sportier versions like the FR model we tried, I'd be tempted to say yes. Live with one of these, then check out what the same money will buy you and you might well agree. True, there are cheaper Focus class family hatchbacks but of these, I can't off hand think of any I'd rather have on my driveway. And that could make all the difference. On a pure value-versus-quality basis, this Leon is already the pick of the Volkswagen Group offerings in this segment. And that also makes it one of the key segment benchmarks outside the Wolfsburg family of brands. Which in turn, makes it a very good car indeed.

Why Lease With Vanarama

Our Price Promise guarantees you the very best deal*.

Choose the mileage, length of contract and initial payment to suit you.

Our experts are on hand for any info you need about leasing.