The Mercedes-Benz Sprinter consistently finishes in first or second place when it comes to the large-van sales race. If you're wondering why it's a winner... Vanarama Van Expert Tom Roberts is here to tell you.

A backend that can carry a bulky payload, tech-defying trim, versatility & it drives like a dream! After that intro, you can take a minute to give Mercedes-Benz a MASSIVE round of applause for creating a brilliant van.

The voice control system (which is included with the optional Advanced Navigation Package) is part of Mercedes-Benz's MBUX technology set (Mercedes-Benz User Experience) & it is definitely an experience, it's like something you would see on Back to the Future. Mercedes even label it as 'state-of-the-art', which it certainly is. 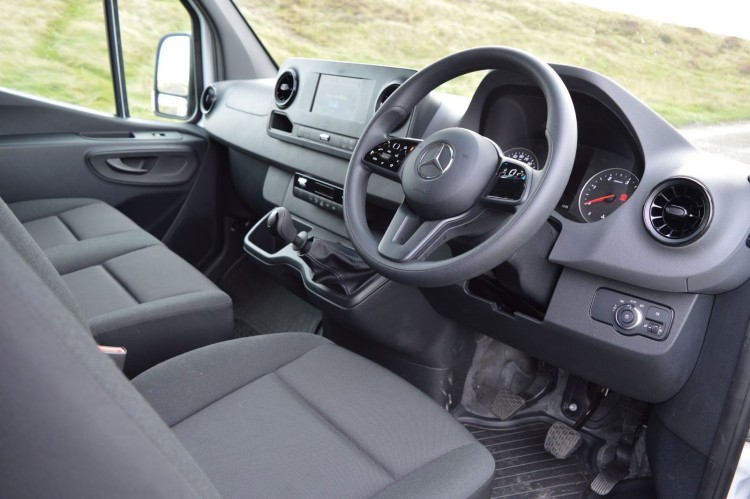 On the subject of navigation, Mercedes-Benz is one of the first vehicle manufacturers to integrate ‘What3Words’ into the system. Just say the three words relating to your exact destination & the satnav will take you right there. No more messing around with postcodes that usually only get you to an approximate area.

The MBUX tech kits you out with a 7" infotainment touch-screen (they were a bit slow on the uptake here, claiming previously that a touchscreen was a driver distraction, but this isn't any ordinary display thanks to the built-in web browser. Mercedes has even put your entire driver handbook into the 7" screen, but if you're not happy with that you still get the bulky book for your service stamps.

4G & WiFi Internet connectivity are also no problem - every Sprinter comes with it out of the box. The van gets PRO Connect connectivity as standard too - it features loads of intelligent functionality including remote monitoring, telematics, even geo fencing, alerting you if the van strays out of a predefined area.

Other futuristic features include:

Mercedes-Benz put driver & passenger safety at the top of their list. All Sprinters come with Attention Assist - a feature that “detects signs of drowsiness & inattention & instructs drivers to take a break”, & Crosswind Assist - an ingenious piece of tech which detects sudden sideways gusts & applies the brakes to just one side of the van to correct drifting before it’s even happened. It’s all very clever.

The load space in the Mercedes Sprinter isn't bad either, actually it's great. The L3H2 version we reviewed measures in at over 4.4 meters in length & 1.7 meters in width! With straight sides & wheel arch intrusion kept to a minimum the loadspace is designed to be as functional as possible. A wide side loading door & rear doors which fold back against the side of the van make accessing this cavernous loadspace a breeze.

If you don't need a loading bay as big as this one, the Sprinter has 3 more sizes you can choose from. Ranking from smallest to biggest - L1 (short), L2 (medium), L3 (long) & the biggest being L4 (extra-long). There's a range of roof heights to: H1 (standard) H2 (high) & H3 (super-high). Optional interior accessories for the cargo bed are:

Right, so the backend is brilliant, but what's it like to drive?

Available in power outputs from 143hp to 190hp (and now in front, rear or even four wheel drive) the Sprinter takes to the road like a duck in water & its weighty body doesn't hold it back. In fact, it feels more like you're driving a car than a large van. Its pulling power is seamless when you change gear & its engine is softly spoken.

The only issue with the latest generation of quiet diesel engines is that other noises become more apparent. On one motorway trip on a windy day, road & wind noise were quite noticeable. We reckon that only a few years ago this would have been drowned out by the less sophisticated, shouty diesel motors.

When you're in the driving seat it's like you're in a translucent glass box, its massive windows with minimal trim mean there's visibility everywhere. The large door mirrors help accommodate the range of road too.

The only other thing we can criticise is the size of the cupholders, they are ridiculously small. The suspension is slightly spongy when carrying light loads, but it's bound to be so I'm not knocking off points, just flagging it up.

There's no question about it. The Sprinter is big, so it's going to have a bigger engine. Automatically you think bigger the engine bigger the emissions but its EURO 6D & VI engines mean emissions are reduced.

The Mercedes-Benz Sprinter runs past its contenders in the large van race, so there's no wondering why it's called the Sprinter. From the bonnet to the backend it's an all-round winner. We think Mercedes have created a truly impressive van that is first to the finish line when it comes to its tech & dimension spec. Definitely one to watch.

If you’re looking for all the benefits of the Sprinter but need a fully electric van, the eSprinter is already here. We’ll be reviewing it as soon as we can get our hands on one...

From the bonnet to the backend it's an all-round winner. We think Mercedes have created a truly impressive van that is first to the finish line when it comes to its tech & dimension spec. Definitely one to watch.
5