Let us introduce you to the Vauxhall Vivaro – born and bred in the UK, this medium van is favoured by the British builder. Want to know why? Read more below…

The Vauxhall Vivaro first launched in 2001, but not as you know it now. In fact, it wasn't originally called Vauxhall Vivaro, this van was first known as the Opel Vivaro and sold across Europe using this name. But you probably didn't know this because when it launched in the UK it was branded using the name you know and love – Vauxhall Vivaro.

After having 3 major revamps, the first being in 2006, the 2nd in 2014 and last but not least, it debuted the 3rd gen last year at the Commercial Vehicle Show. The current gen Vivaro is available in 2 body lengths – L1 and L2. You also have the choice of a panel van or double cab model.

Basic, But It's A Bestseller 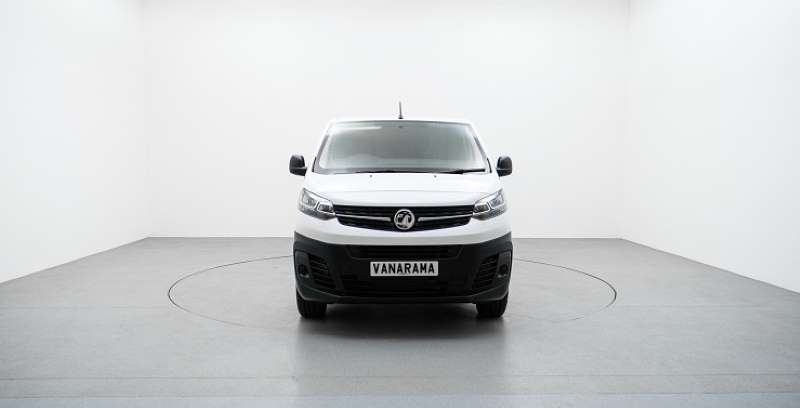 So here it is – the front. If you're looking for a van that looks like a van then the Vauxhall Vivaro is perfect… yep I know that sounds stupid, but some vans do look more like cars, take the Ford Fiesta van for instance!

Right, first up is the black grille and it's hard to miss due to the polar white body colour which holds it. Oh, it's also hard not to notice the Vauxhall emblem and the sweeping metal bars that filter towards the headlight clusters. And, if you look just below the 1st grille you'll notice a 2nd, but this one isn't dressed up in any metal, it's just the bog-standard plastic here.

Now let's talk about the headlights. Well, there's not much to talk about actually… except the fact that they sweep round towards the electronically powered wing mirrors – nice! But quite lazy now the more I think about it, what will be next? A keyless ignition? Oh wait, yep that's already a thing.

Let's mention the bumpers, which inhabit both sides of this van. If you can't spot them straight away (again it's hard not to) look towards the bottom of the passenger or drivers side door and BOOM there they are. Why do you need these you ask? Well they'll come in extra handy if you choose a white Vauxhall Vivaro. The bumpers will catch speckles of tarmac and reduce your chances of scrapes or scratches. 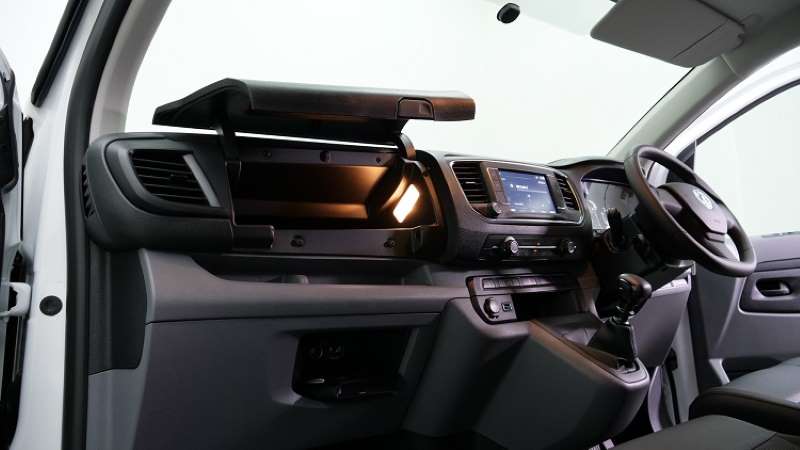 Now for the cabin. This is what you can expect if you pick the Edition model.

Well it's basic, but it does the job. Even though it might be lacking a bit of va-va-voom, the features in the cabin are very hard wearing – you know what they say quality over quantity right?

So, first thing you'll see when you take a seat in the front is the very durable looking dashboard. Want our honest opinion? It doesn't look pretty, but with a slight contrast in colour between the upper and lower dashboard, the overall design isn't the ugliest. Who cares if it's not built using aerodynamic shapes and premium materials, after all it's about the functionality and that won't be compromised when you choose this van.

And talking of dashboards, this one has a good amount of storage. Look just above the infotainment display and you'll see a pocket for storage, look to the left and there it is – the glovebox. There's a handy light in here too. Glance just below the glove box and there's more storage space, but we're not quite sure what you could use this for… holding sandwiches? And finally, a massive cubby hole, which will hold water bottles, newspapers and more!

Now for the infotainment system. The 7-inch touchscreen gives you a range of smartphone features, including Apple CarPlay, Android Auto, and you'll get a sat nav that you can control using your voice! Yep I said it – VOICE CONTROL! You'll also get Bluetooth, USB ports and Cruise Control as standard. 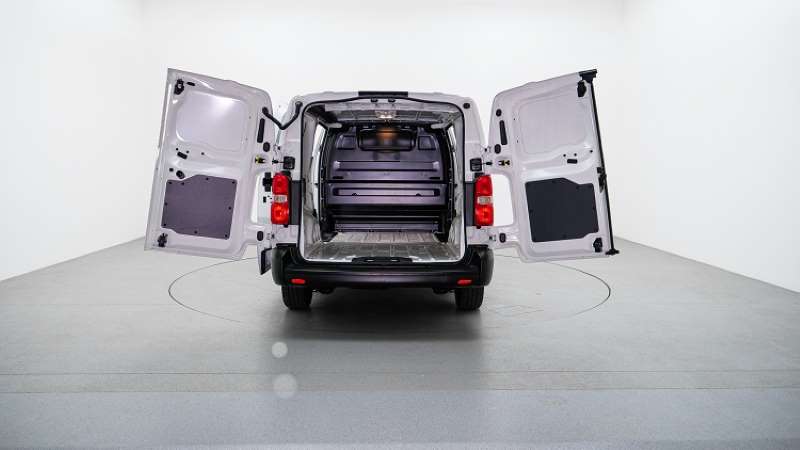 You're probably getting sick of us mentioning storage, but guess what? There's loads of it in the back of this van too.

The loading bay has not 1, but 3 doors – 1 on the back and 2 on the side, easy access? In terms of their functionality, the size of all 3 doors are perfect for loading items in and out any which way. The back door height measures to a height of 1.2m with a width of 1.3m and the side doors are 1.2m in height and 0.9m in width.

And if you're wondering how much you'll fit in the back of this Vauxhall Vivaro L2H1, the payload is 1415kg – that's nearly double what the Citroen Dispatch can hold. And before you ask – you'll be able to load anything that measures to 1.4m in height and 4m in length. Impressive ay?

How It Drives: Slow & Steady Wins The Race

Right enough about storage, let's get to grips with the heart of this van – the engine.

Pop the bonnet up and there it is – behold the 2.0-litre diesel engine, which is Euro 6 compliant. Pick this model and you'll also get a 6-speed manual gearbox.

Why is it powerful? Well if you've watched our full video review you won't need me to tell you about the power it's packing, but if you haven't (yet) you'll be pleased to know that power isn't something that this Vauxhall Vivaro is lacking.

Oh, and if you're concerned about its ability to handle the road, you don't need to be. This van will tackle all terrains with ease, off-road or on-road, you've got the adjustable traction control to thank for that.

What about the comfort of the cabin? It gets top marks from us. It's not modern or luxurious but it does what it needs to. There's plenty of leg room for the driver and passengers, and headroom is plentiful too.

So how can we compare the Vauxhall Vivaro to the Ford Transit Custom – the nation's favourite van?

You might be surprised by this, but the Ford Transit Custom has a payload of 850kg, but the Vivaro has a…(wait for it)…1415kg payload! That's nearly 562kg more than the best-selling van in the UK! But as for looks, the Vauxhall Vivaro is a good-looking van, but the Custom is your favourite.

This van really has got good reason to be proud, it's functional, comfortable and packs a punch when it comes to the engine, and the best bit? It's born and bred here!

Having seen the Vauxhall Vivaro being built first hand, I can tell you this van is made to last. It is hands down one of my favourite medium vans & thousands of users agree with me.
5

I like the overall feeling when driving, very clear views. Could do with more storage space in the front.
Evan Myhill
5
The van is quite basic.
Scott Walker
4