In the blink of an eye, the festive season is in full swing – Christmas ads, Kevin the Carrot and all. With that also comes 11 months’ worth of social events packed into just four weeks, from work parties to Black Eye Friday celebrations.

As such, the police are usually especially keen to stress drink-driving awareness this time of year. On the cusp of 2021’s festivities kicking off, we surveyed 1,000 UK adults on their knowledge of the current drink-drive limits to find out just how many have no idea they could be putting themselves and others at risk.

We presented 1,000 respondents with five scenarios, from the office party to a tipple with Christmas dinner, breaking down the proportions of those with false confidence in the law. 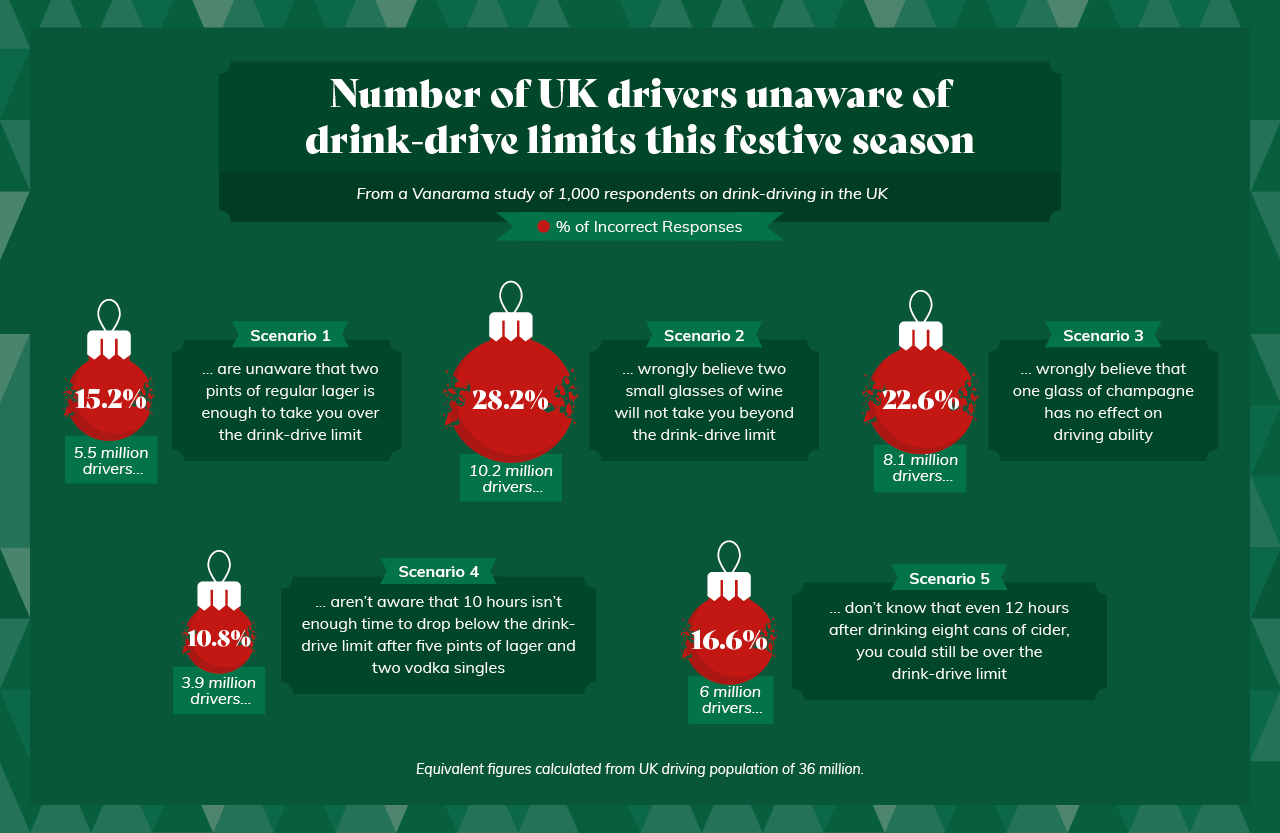 The responses show that one in five UK adults – or eight million drivers – have no clue that it takes just two small glasses of wine to take your blood alcohol concentration (BAC) beyond the England, Wales and Northern Ireland limit of 0.08%, or 80mg of alcohol for every 100ml of blood. In Scotland, that limit is 0.05% and 50mg of alcohol.

Worse still is that nearly a third of respondents believe a glass of champagne with the Christmas Day roast would have no effect on their ability to drive. Against the UK driving population (36 million), that means just over 10 million drivers could be risking it this year.

Applied to the population as a whole, as many as 19 million UK adults could be the driver or passenger of a car operated under the influence of alcohol on Christmas Day.

We also quizzed participants on the amount of time required for your body to process alcohol and drop below the drink-drive limit. When asked if 12 hours was enough to stabilise your BAC after five pints of lager and two vodka singles at the work Christmas party, more than one in ten were confident it was.

In actual fact, this level of alcohol could take up to 50% longer, meaning four million drivers could be caught red-handed the day after work festivities this year.

Affecting reaction times, coordination, vision and even our judgement, alcohol is best served without driving. According to independent charity Drinkaware, even drivers with a BAC of less than 0.05% (roughly one and a bit pints of lager) have a three-times risk of dying in a vehicle crash. Those between 0.08% and 0.10%, equivalent to only three or four pints, are 11 times more likely to die in a crash.

Although there’s been a drop in recent years, 7,800 people are estimated to have been killed or injured in 2019 when at least one driver was over the limit, according to the Department for Transport’s latest published statistics.

Drink-driving punishments are just as sobering, however, as even standing by your car while intoxicated can result in three months’ imprisonment, up to £2,500 in fines and a possible driving ban. Actually driving or attempting to drive under the influence raises those to six months’ imprisonment, unlimited fines and a driving ban of at least one year, or three if you’re convicted twice within a decade.

Causing death by careless driving while intoxicated could result in 14 years behind bars, unlimited fines, and a two-year minimum ban. You’ll also have to complete an extended driving test before the licence is returned.

Six Tips For Staying Safe On The Roads This Christmas

Despite the many celebrations at this time of year, especially after the write-off that was Christmas 2020, it’s worth knowing your limits – both personal and those related to drink-driving.

Follow our tips below for managing your alcohol consumption and staying safe on the roads:

How Much Do I Need To Drink To Be Over The Limit?

So, we know the UK’s drink-drive limit is 80mg of alcohol for every 100ml of blood (or 50mg for Scottish motorists), but how does that translate into actual drinks? Below, we’ve listed some common choices and how many hours it takes one helping to be processed by the body.

Hours required based on one serving of each drink. Figures from morning-after.org.uk.

Although one serving of each of the above wouldn’t necessarily take you beyond the drink-drive limit, the time required shows how long alcohol can hang about in your system. Perhaps most surprising is that a large glass of wine, at five hours, takes longer to process than the likes of a Long Island Iced Tea or double vodka.

Even the least potent single gin would need two and a half hours to be undone.

Vanarama surveyed 1,000 respondents on a range of alcohol-related scenarios, from work parties to a glass of champagne with Christmas dinner. The incorrect responses were applied to the UK population and UK driving population to determine the number of people who could be at risk of drink-driving this year.

Find more unique research and insight on the Vanarama blog or browse our car lease deals if you’re searching for an upgrade.