The UK is widely considered one of the best destinations for driving roads in the world. From the charm of England’s national parks, to the mountainous Scottish Highlands and the snowy peaks of Wales, the scenery provides an inspiring backdrop to enjoy your drive. In 2021, it was predicted that around 54 million Brits were planning to take advantage of the UK’s natural beauty and venture on a staycation, rather than travelling abroad. Luckily for a few, they found themselves travelling along some of the world’s best driving roads – but which ones should you be adding to your bucket list?

To answer this, Vanarama wanted to find the most desirable and enticing road-trip destinations in the UK – journeys that you’ll want to relive over and over again. Using search data from YouTube, we analysed which driving roads are being searched for the most, so you can find out which road trip destinations you need to add to your bucket list. 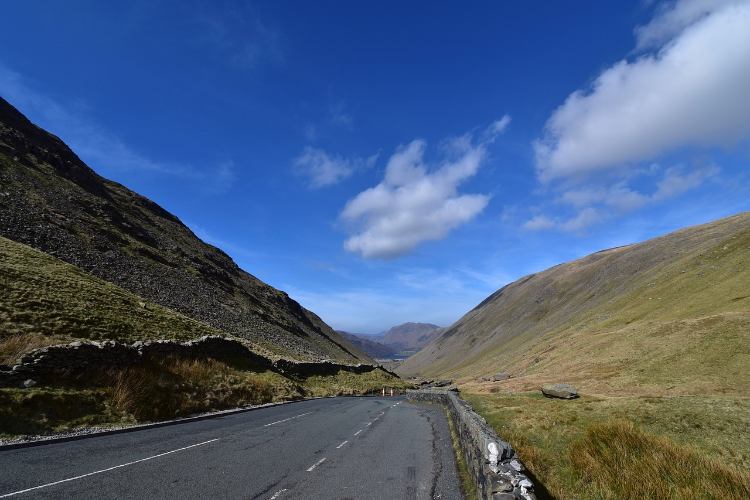 The stunning Lake District tops our list for the best driving roads in the UK with a total of 37,200 yearly searches on YouTube. England’s largest national park, the region spans around 912 square miles throughout the historic counties of Westmorland, Cumberland and Lancashire. The vast landscape of the Lake District means there’s always plenty of tarmac to keep you busy during your visit.

Although the entire region is surrounded by beauty, some of the more famous and well-travelled routes for motoring enthusiasts include the Keswick Loop via Buttermere and Borrowdale, Grasmere to Windermere, and also Ambleside to Ullswater. However, most would agree that the most challenging of routes is the Coniston Loop. Taking you through a mixture of picturesque villages, jaw-dropping valleys and craggy mountains, it’s a testing route for even the most experienced drivers. The 34-mile drive is a must for anyone seeking to experience the best that the UK has to offer. 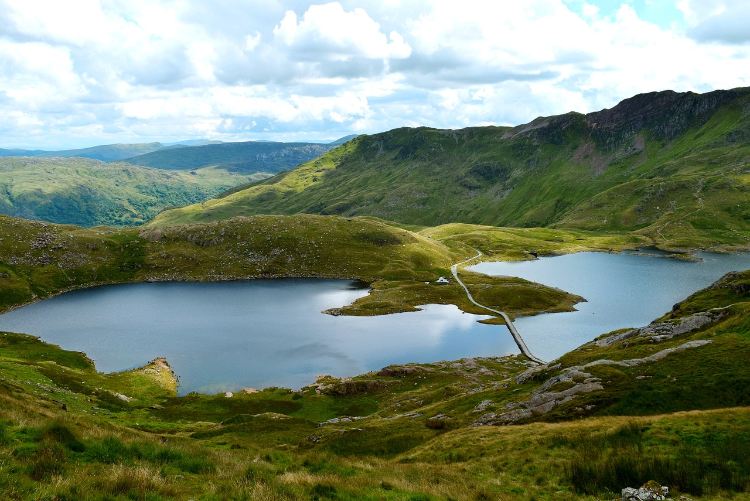 With more than 25,000 yearly searches on YouTube, the outdoor adventure capital of Snowdonia provides some of the most memorable driving experiences in the UK. Packed with a variety of diverse landscapes over an 823-square-mile stretch, including 9 mountain ranges, the national park is the ideal place to visit if you’re seeking a memorably scenic driving experience.

Aptly named by Visit Wales as ‘Highways to Heaven’ due to its roads’ elevated position high above sea level, Snowdonia features some of the most stunning driving routes around. One of the most challenging is a lap around the highest mountain in Wales, Mount Snowdon, topping 1085m. The journey will take you through the mountain’s central massif. Here you will find an array of towering hills and valleys during your drive, along with officially Snowdonia’s prettiest village – Beddgelert. If you’re approaching Snowdonia from the east, hop on the A5 from Llangollen for the most inspiring and mesmerising views around. 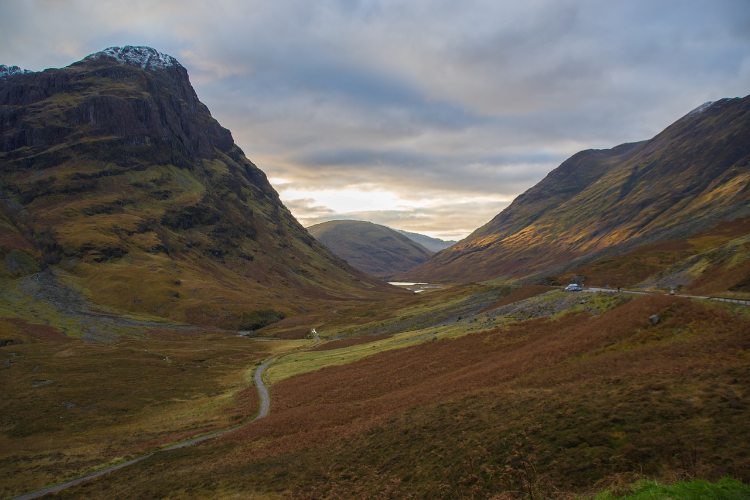 Perhaps the VisitScotland’s greatest ever success, the North Coast 500 has become a firm favourite with both driving enthusiasts and scenery lovers since the route was launched in 2015. The longest drive on our list, the NC500 stretches across a 516-mile route around the picturesque Scottish Highlands, complete with an array of stunning coastal scenery. Beginning and ending at Inverness Castle, it’s recommended that you take at least five days to complete the drive, enjoying the popular local villages such as Ullapool, Durness and Thurso along the way.

Don’t forget to stop off at the most northerly point on the UK mainland, John o’ Groats. Although the village itself only has a population of around 300 people, thousands of people every year visit the village, most of which come away with a picture of the famous John o’ Groats signpost. Due to the route’s popularity as a driver’s paradise, you’d be unlucky to not come across a Lamborghini, Ferrari or Aston Martin on your travels. Every year, around 14,400 people search for the route on YouTube. 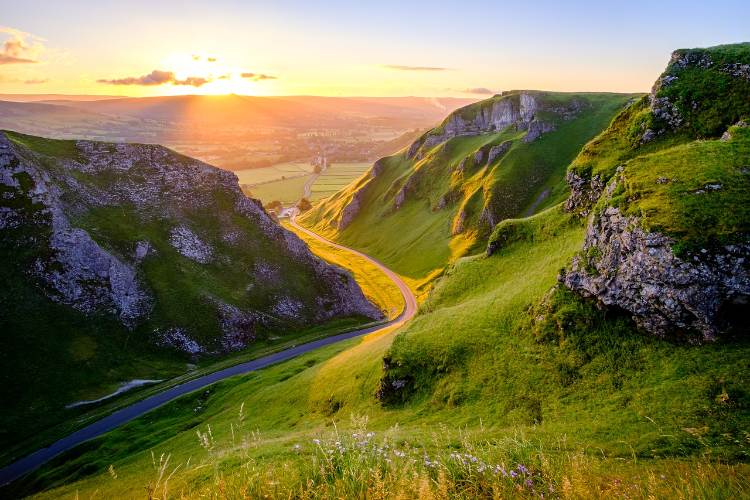 Only a stone’s throw from all 3 cities of Manchester, Sheffield and Derby, the Peak District was the first of the UK’s national parks to receive an official designation in 1951. Ever since, the national park has risen in popularity, attracting around 13 million visitors every year from all over the country. What makes the Peak District such a favourite with adventure-seeking drivers is the extraordinary variety of roads and scenery that’s on offer. An impressive concoction of winding country lanes and sudden peaks and troughs makes for an exhilarating driving experience.

When visiting the Peak District on your driving adventure, set some time aside to take on the renowned Snake Pass. Surrounded by green hills and running adjacent to the River Ashop, the pass provides 26.1 miles of demanding tarmac to enjoy. However, be aware that it’s advised to avoid Snake Pass during the winter months due to the treacherous conditions. 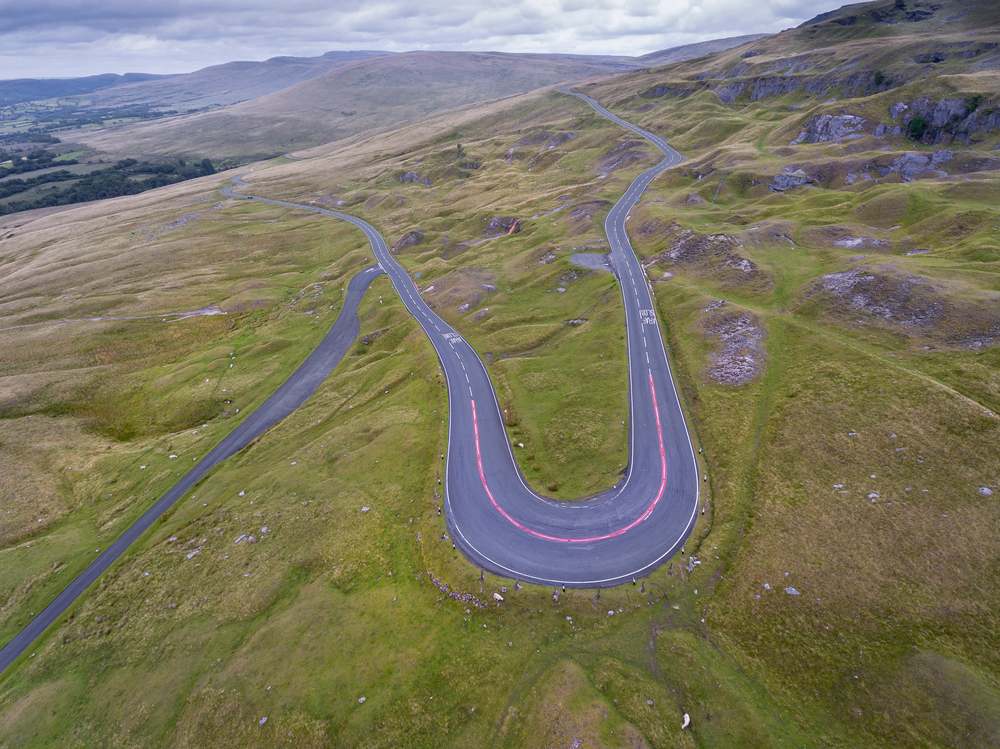 Located in the stunning Welsh national park of Brecon Beacons, the Black Mountain Pass is one of the most challenging and exhilarating stretches of road in the UK. The route features a tantalising 19-mile line-up of thrilling turns, dips and twists that was made famous after an appearance on BBC’s Top Gear. Perhaps due to this, more than 13,000 people search for the route on YouTube every year. Taking a total of 40 minutes to complete, the road stretches from Gwaun-cae-Gurwen in the south to Llandovery in the north.

As you make your way along the pass, you’ll be faced with a never-ending ensemble of demanding tight hairpins and sharp corners. All the while, you’ll also be enjoying the view from 1624ft above sea level. The perfect time to test your driving skills on the Black Mountain Pass is in the summer months. However, this is also the busiest time of year. Be sure to set off in good time when travelling to the Black Mountain Pass, follow the road signs and approach blind corners with caution.

The Top 20 Best Driving Roads In The UK

Fancy picking up a new ride for your next road trip? Head over to our car leasing page to find the latest hot offers and deals on brand-new cars from manufacturers such as Porsche, Mercedes-Benz and Ford.

Related Articles
What’s Best: Air Con Switched On Or Windows Open?
A question that always comes to mind as those inevitable warmer days start to roll in...Read More
Car Companies Vs. Countries
Vanarama compares the spending power of the largest car companies with countries around the world...Read More
The 2030 UK Ban On The Sale Of New Petrol & Diesel Vehicles Explained
In 2030, the UK Government will ban the sale of new diesel and petrol cars...Read More
This website stores cookies on your computer. These cookies will allow us to remember you and your preferences.
We use this information to improve your browsing experience.
To find out more, please read our
cookie policy.