Future Classics: Predicting The Rarest And Most Classic Cars By 2030

As the UK creeps ever closer to the 2030 ban on the sale of new petrol and diesel cars, the number of traditional vehicles on the road will dwindle. But with that comes the opportunity to cash in on increasingly rare motors and potential classics.

Analysing official UK data for 10,115 car models licensed in the UK since 2014, Vanarama calculated the change in the number of models on the road by 2022, and used the figures to predict how many will be around by 2030.

With over 1,000 models estimated to have only 500 or less examples left on the road by then, your run-around could quickly become a lucrative investment.

Suffering a 96% drop in numbers over the last eight years, our research highlights the second-gen Ford Ka as the rarest of the lot come 2030 –with only 23 models predicted to still be around. 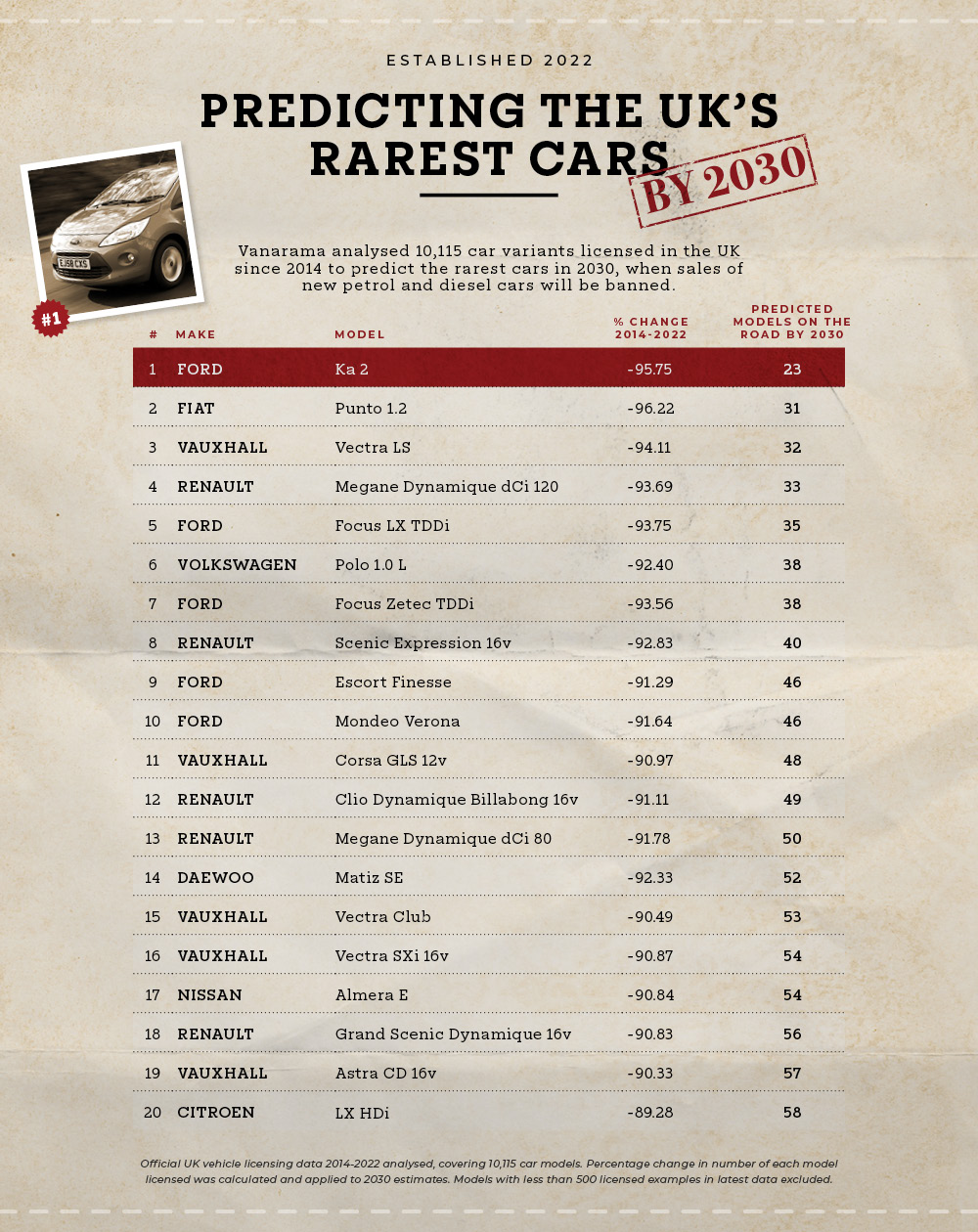 Although rarity is no guarantee of classic status, many obscure cars become accidental antiques thanks to renewed popularity, historical significance or uniqueness. So, it may be worth holding onto the cars covered here, on the off chance they make you a pretty penny later down the line.

Just behind the Ka is the Fiat Punto 1.2 and Vauxhall Vectra LS, on 31 and 32 models respectively. Most models among the most rare are relatively recent productions, such as the Renault Megane Dynamique and the Volkswagen Polo 1.0, but some may already be knocking on the door of the exclusive classics club.

The Ford Escort Finesse, on the other hand, last left the production line more than 20 years ago. Our calculations reckon there’ll be only 46 of them kicking about eight years from now.

No Premium Models Feature Among The 20 Rarest

Only volume brands, such as Vauxhall and Renault, feature among the rarest models. Variations of the Vectra alone appear three times in the top 20.

The likes of BMW, Mercedes-Benz and Audi, however, came nowhere near – in fact, their models don’t appear any higher than 43rd.

European manufacturers also dominate the results. Even popular names like Nissan (Japan) don’t get much of a look in when it comes to specific models at the top of the table, joined by Daewoo (South Korea). Ford (USA), however, features four times – with the previously mentioned Escort, two Focus variants and the Mondeo Verona.

Vauxhall Will Be The UK’s Rarest Carmaker By 2030

Of the 100 rarest models, Vauxhall accounts for 18 – almost one fifth. That’s perhaps unsurprising considering the brand’s strong links with British motoring, first selling cars over a century ago in 1903.

Just behind is French manufacturer Renault with 17 models among the 100 rarest, and then Ford on 12. Peugeot and Citroen complete the five rarest makers, making a promising case for owners of French motors.

Motorists with a Megane on the drive should be special attention, as six versions of the model can be found in the top 50 rarest cars. 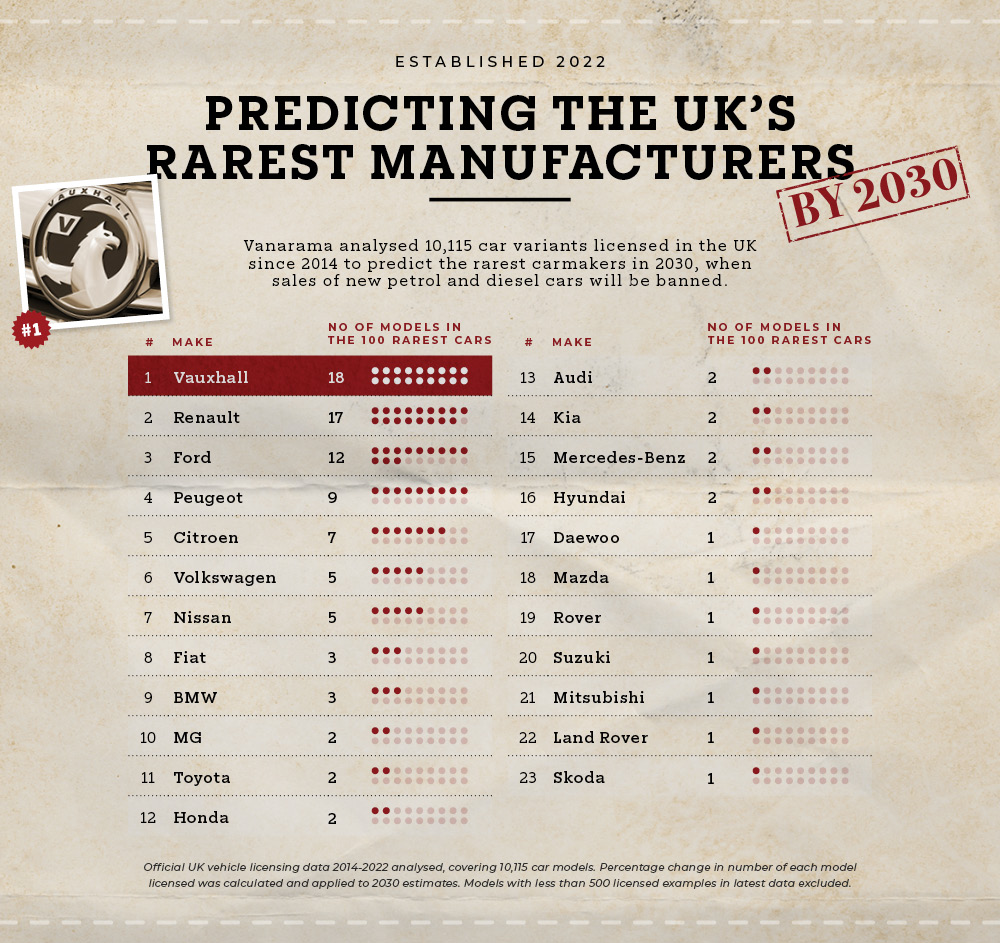 Although no premium brands feature among the rarest cars, a few popped up at manufacturer level. German maker BMW makes the top ten, with three models, followed by compatriots Audi (two) and Merc (two).

Land Rover just makes the list with one model – the Freelander GS.

There’s a much more international spread here, though, with only 13 of the 23 rarest manufacturers being brand associated with European markets. Asian marques are also well represented – through Nissan, Toyota, Honda, Kia, Hyundai, Daewoo, Mazda, Suzuki and Mitsubishi.

Eight years of official DVLA data on vehicles licensed in the UK, spanning 2014-2022, was analysed for changes in numbers. The percentage changes were then applied to current figures to predict how many models will remain in 2030 (when new sales of petrol and diesel cars will be banned), and thus which will be the rarest around.

To exclude brand-new models and those already deemed rare, models with less 500 examples on the road currently were excluded from the research. In all, 10,115 specific car models were analysed.

Related Articles
Electric Car Technology Not Available On Petrol Cars
Electric vehicles are fast becoming the superior ride, and the reasons are numerous...Read More
8 Ways To Avoid Fatigue When Driving
Here’s a few tips to help you ward off feeling drowsy while driving....Read More
The Link Between EV Uptake & Air Quality Across Europe
Vanarama explores the link between air quality and EV uptake across Europe...Read More
This website stores cookies on your computer. These cookies will allow us to remember you and your preferences.
We use this information to improve your browsing experience.
To find out more, please read our
cookie policy.