Classic Car EVs: Is It Worth Converting A Classic To Electric?

In the modern age, there’s no room for nostalgia. Nobody with a smartphone also has need for a pager, while the dawn of GPS and satnavs puts paper maps in the backseat. Is that really the case, though? Nostalgia, we mean, not pagers. They’re not making a comeback.

The electrification of cars has been so swift, so widespread that the thought of there being any room for traditional or retro motoring going forward is hard to imagine. But there is. A growing number of UK startups and specialists are taking classic cars and replacing their traditional powertrains with battery packs and electric motors.

The uncertainty, however, is what effect such a project has on value, and whether there’s profit in it. To find out, Vanarama has looked at the value changes for a range of EV classics, with input from the world’s largest converter.

Scouring the UK for used classic stock and companies offering EV upgrades, we’ve pulled a list of vehicles and the values of standard and electric examples. Despite having the joint-cheapest standard cost at £5k, the MG MGB Roadster has the highest value change of more than 2,000%. The battery-powered two-seater, created by bespoke EV builders RBW, has an asking price of £108k, 20 times more than the original. 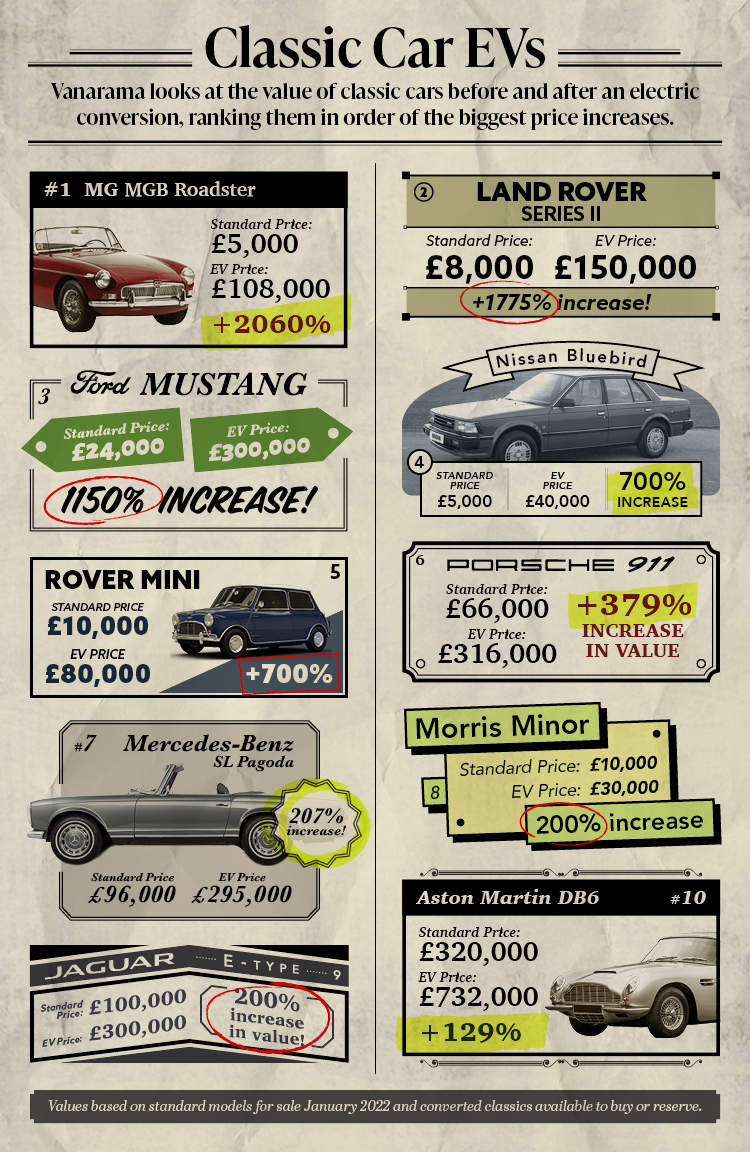 But higher EV prices don’t necessarily indicate a higher value increase. An electric Aston Martin DB6, close relative of the car made iconic by James Bond, will set you back $1 million – or just over £730k in GBP. But bafflingly, the DB6 shows the lowest price increase of any model in our research with a gain of ‘only’ 129%. That’s explained by the DB6 already being a highly sought-after classic, especially in standard form, with non-electric prices averaging £320k – far and away the most expensive in our research.

Less valuable classics, such as the Nissan Bluebird and Rover Mini, offer more potential for profit. Despite standard pricing sitting around £5k and £10k respectively, models converted to electric are showing jumps in value of 700%.

A Full Restoration And Conversion Could Cost £180k+

Although some of the value increases suggest there’s shrewd business to be had in the EV conversion game, they don’t reflect the costs in doing so. While conversion kits are available from around £10k, that fee often doesn’t include all components (motor, batteries, charger etc.) or even the cost of getting someone to fit it.

And when it comes to the really high-end classics, such as the Jaguar E-type or previous generations of the Porsche 911, you may be better off paying a custom builder one bill to sort the lot. Which is exactly what Electric Classic Cars, the world’s largest converter of classic to electric, does.

We spoke to Jon Peck, Customer Liaison at their Wales workshop, to get an idea of the logistics involved: “Although there’s scope for making profit, for most customers we speak to it’s a labour of love. With some examples, such as a 1970s Porsche 911 or Mercedes-Benz SL 190, the cost of conversion can come close to or even exceed the value of a standard model in good condition. An ongoing SL 190 project we have is currently looking like £180k all in.”

“But that’s irrelevant for most of our clients, as they’d never even entertain the idea of selling their prized cars – they just want to enjoy it in a more sustainable way, without the time-consuming maintenance of a decades-old vehicle.”

Converting Classics Can Even Improve Their Handling And Performance

Those worrying about the effect a heavy battery pack can have on the handling and driving pleasure of a vintage motor needn’t worry, either. In many cases, Jon reckons their work can have the opposite effect: “We often find that our conversions leave the workshop lighter than they arrived, making for improved use of power and handling. We also keep a close eye on weight distribution, and through the careful placing of batteries and motors we can get closer to 50:50 than the manufacturer managed. Especially with the sports cars we work on, maintaining an engaging drive is crucial.”

When asked if there was room for profit in converting classics to electric, he said it’s possible if the donor car is carefully selected: “We would never rule out this sort of thing for profit – if you pick the right car to start with, there’s definitely potential. An original Fiat 500 in good condition will cost around £7k-£15k, with an additional £30k for the electric conversion. In terms of repurposed classics, £45k all in may well have headroom for selling on.”

Five Tips For Converting Classic Cars To Electric For Profit

There’s no one-size-fits-all approach to making money from a converted classic; simply throwing a battery pack and electric motor into a vintage motor isn’t enough to guarantee a premium. However, below are a few tips to consider if you want to give yourself the best chance of turning a profit:

Bookmark the Vanarama blog for more automotive features and news, or check our latest car leasing deals if you’re considering an upgrade.