From Russia with Fumes: Daniel Craig the Least Eco-friendly Bond Yet

Whether it’s the motors, martinis or even the many affairs, the James Bond character is one of excess. Often overlooked, however, is the never-ending travel and sizeable carbon footprint he could be leaving behind.

It’s all in the name of Queen and country, of course, but is 007 sticking to 60 years’ worth of tradition, or are there signs that the character is becoming more eco-aware?

Ahead of No Time to Die, Daniel Craig’s swansong as the MI6 agent, releasing in late September, we examine each of the 24 films that precede it and their lead actor’s carbon footprint.

Sir Roger Moore’s globetrotting Bond racked up the most miles overall ¬– equal to three times around the world (79,712 miles). However, on average, it’s Daniel Craig that our research shows as the most damaging to the environment. 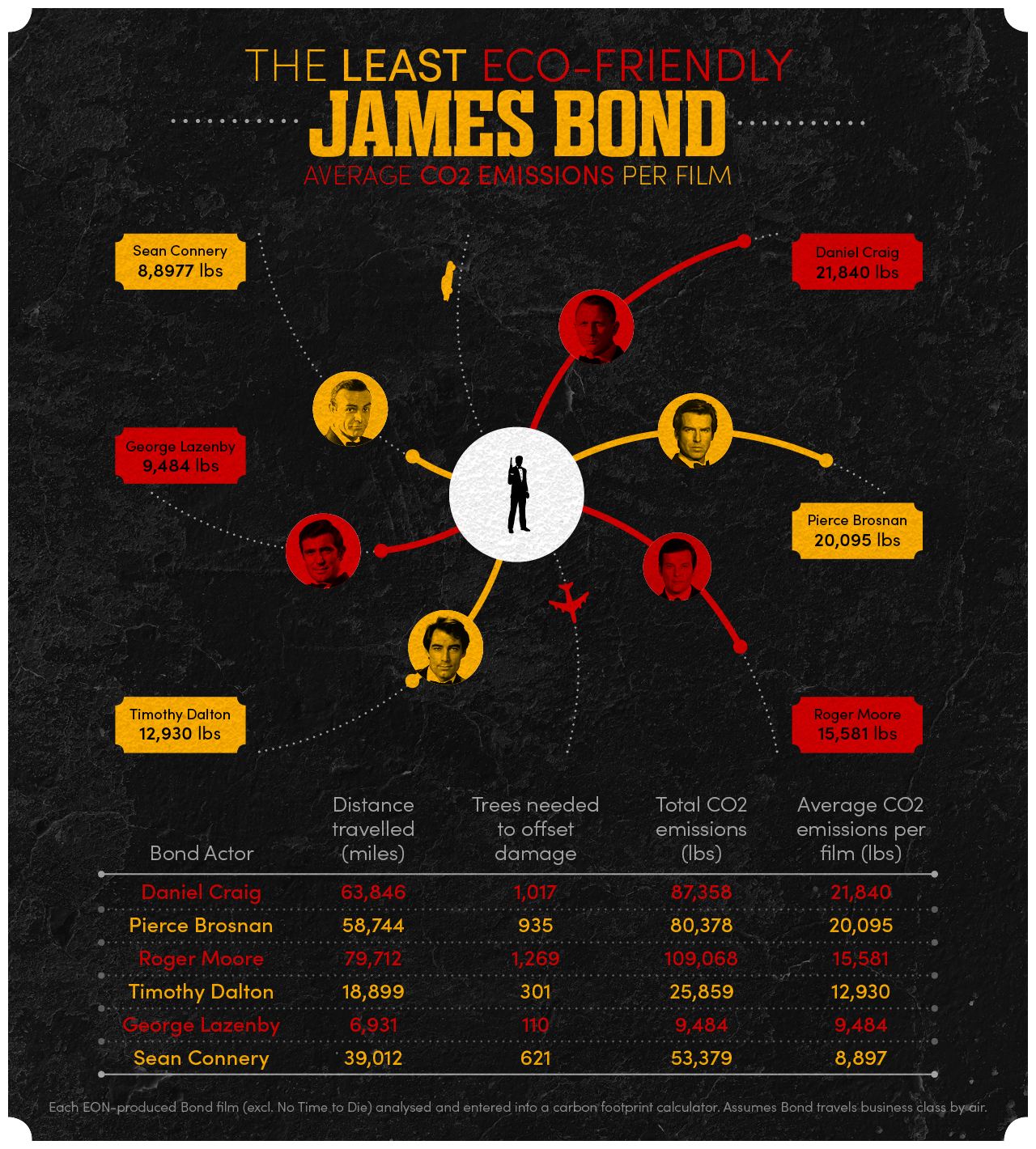 In the four films prior to No Time to Die, he averages 21,840 pounds of travel-related CO2 emissions for every mission. Moore’s seven adventures make him the most well-travelled Bond but return an average of only 15,581 pounds per film.

Between them is Craig’s predecessor, Pierce Brosnan, on just over 20,000 pounds. In fact, the results very nearly match the order in which the actors first appeared as 007 – likely spurred by the increased expectations of modern-day audiences.

Sir Sean Connery, the first and perhaps most iconic to fill the knife-equipped boots, travelled 39,012 miles in his six films yet still manages the lowest per-film average of CO2 emissions (8,897).

… But His Attitude Towards The Environment May Be Changing

Although our study shows Craig as the Bond actor generating the most CO2 emissions, a closer look at his films suggests he may be more environmentally aware than we think. 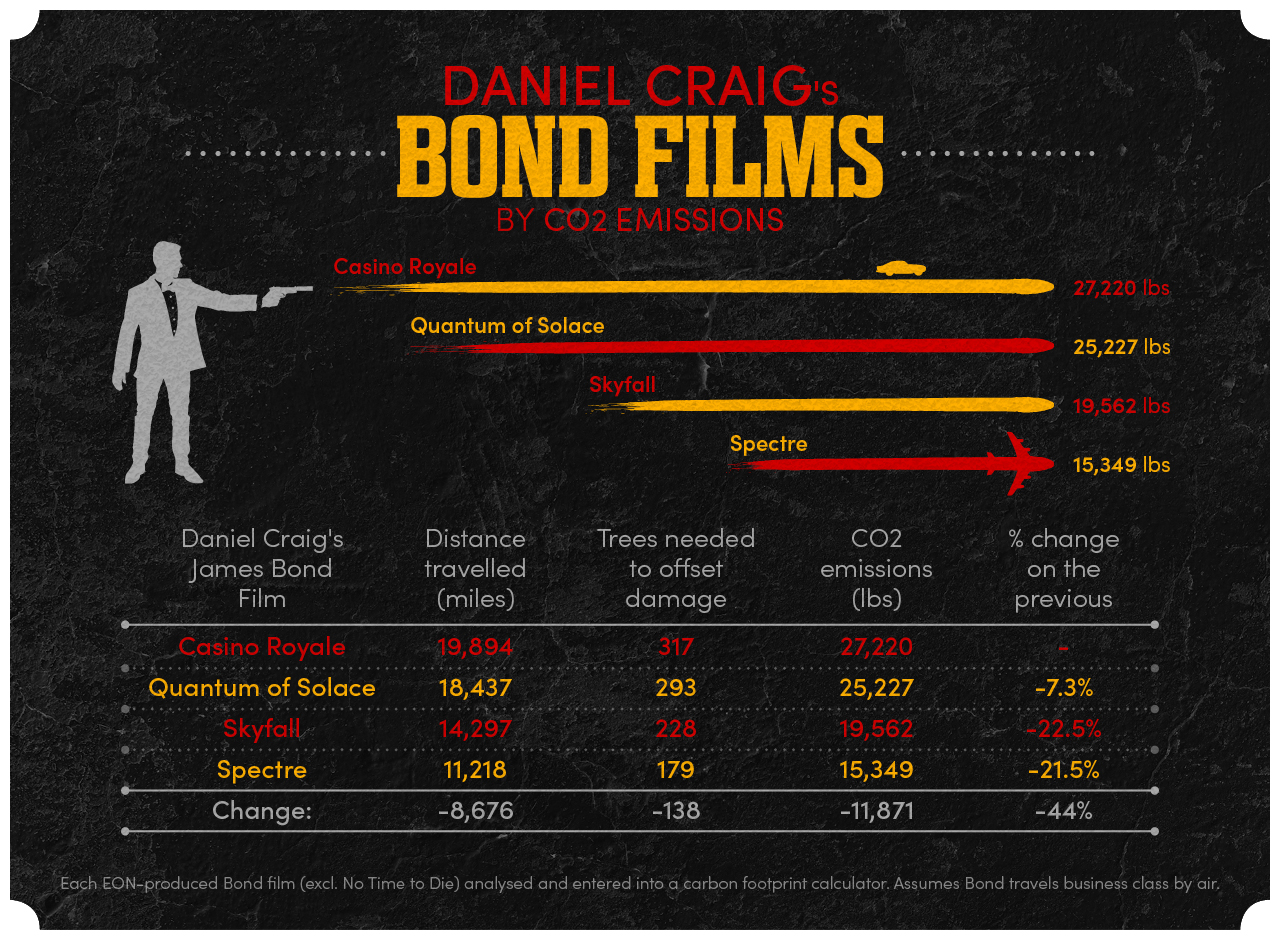 It seems Craig has broken the mould, just ahead of his last assignment.

The film-specific data also backs up the theory that modern cinema is the biggest driver behind Bond’s air miles. Three of the five worst films for CO2 emissions were released inside the last 20 years – a disproportionate figure considering the franchise reaches its 60th anniversary in 2022. 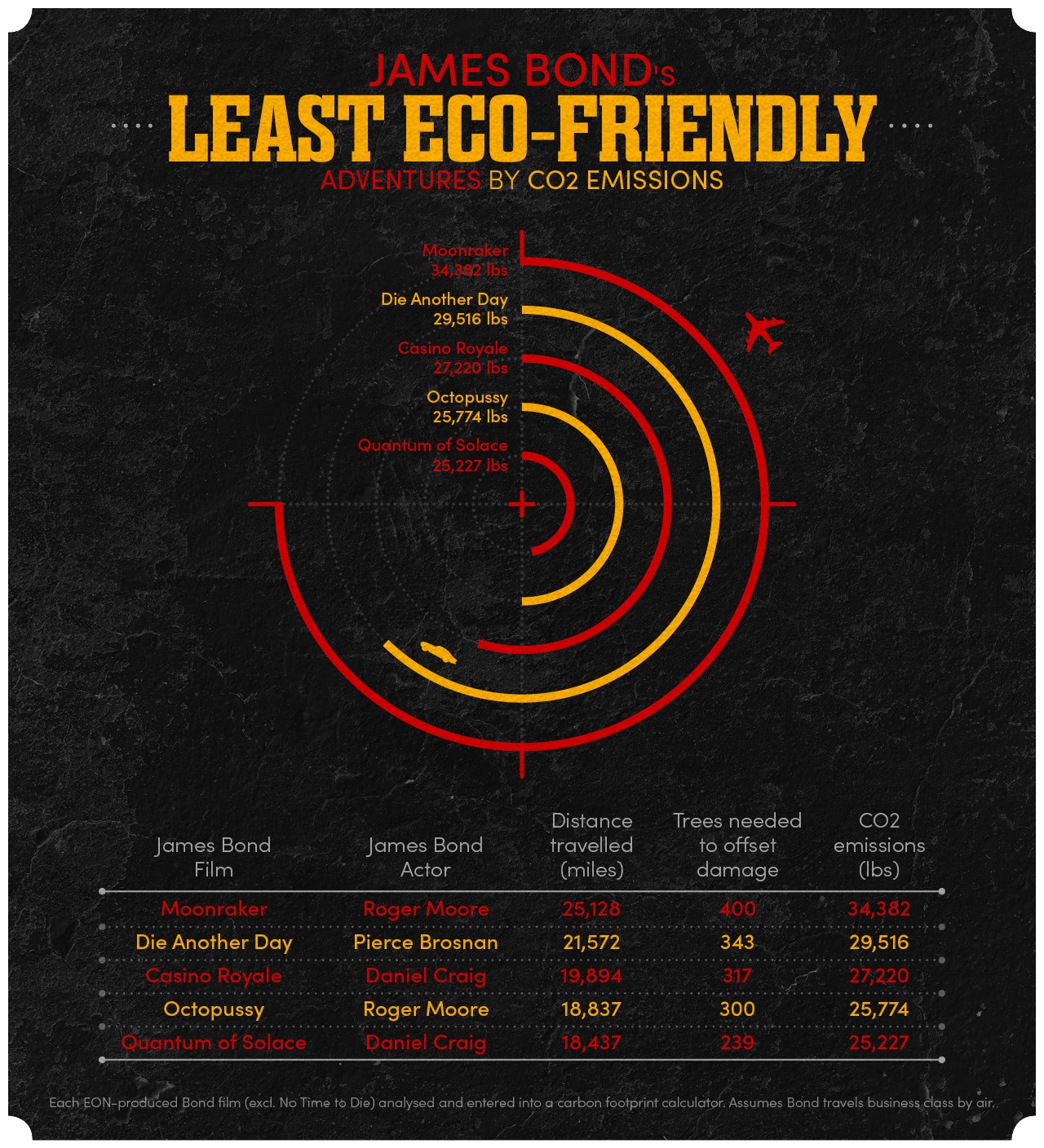 The top spot, however, is held by 1979’s Moonraker. As Bond’s only off-Earth adventure, you’d expect it to be the heaviest on CO2 emissions by some way, but surprisingly, his rocket trip accounted for only 62 miles of the 25,128 total. Still, 400 trees would need planting to offset the damage.

Mention of Casino Royale and Quantum of Solace suggests No Time to Die will be equally far reaching.

Bond’s Most Eco-Aware Mission Was Over Three Decades Ago 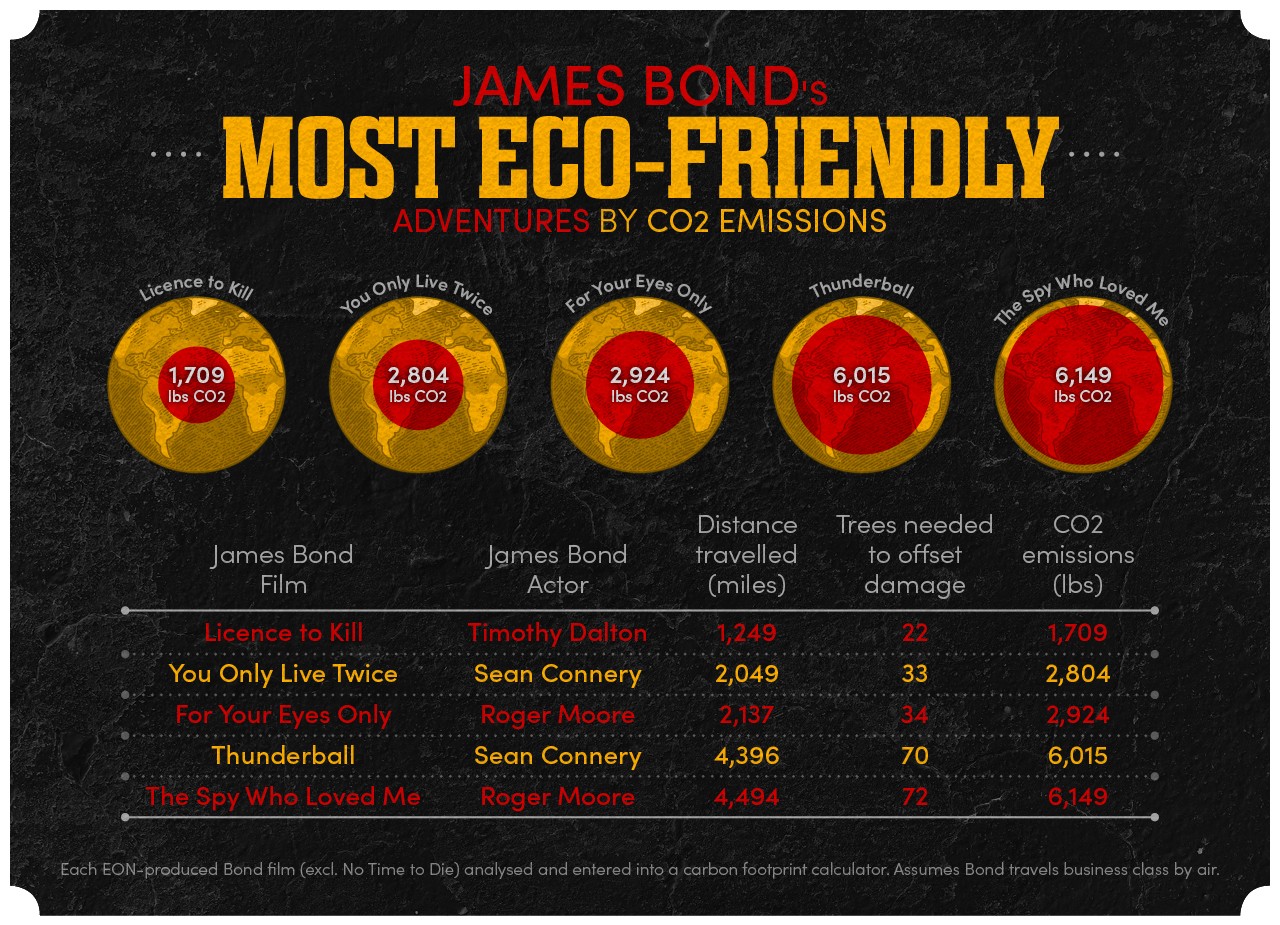 Connery and Moore account for the rest of the list, with none of the films passing the 5,000-mile mark. Combined, the five most eco-friendly films see Bond travel less than 15,000 miles (14,325).

Such a figure requires only 229 planted trees to offset the CO2 emissions – Craig’s Casino Royale and Quantum of Solace each required more.

Each of the 24 EON-produced James Bond films, excluding the yet-to-release No Time to Die and independent spin-offs Casino Royale and Never Say Never Again, were analysed for the locations visited and distance travelled by Bond.

The distances were then entered into a carbon footprint calculator and scored against one another.

For more insight, news and reviews from the Vanarama team, be sure to bookmark the blog. Or if you’re considering an upgrade, browse our latest special offers.