The brand-new Tesla Roadster is finally set to hit roads in 2022 after a two-year delay – and it’s set to be rather special. Elon Musk has claimed that the base model of the new Roadster will be able to hit 0-60 mph in 1.9 seconds, which would be enough to break the current record by around 0.2 seconds. However, in typical style, Tesla have decided to go one step further.

Tesla are a car manufacturer that love their packages, which allow customers to add certain features that make the car faster. Of course, these packages come with exciting names such as the Ludicrous Mode, Ludicrous+ and Ludicrous+ with Warp Mode. However, an even more ‘ludicrous’ package may be on the horizon for the next generation Tesla Roadster. Back in early 2019, when talking about the upcoming Roadster, Elon Musk mentioned that cold-gas thrusters would be fitted to the back of the car in what he is calling the... ‘SpaceX Package’. 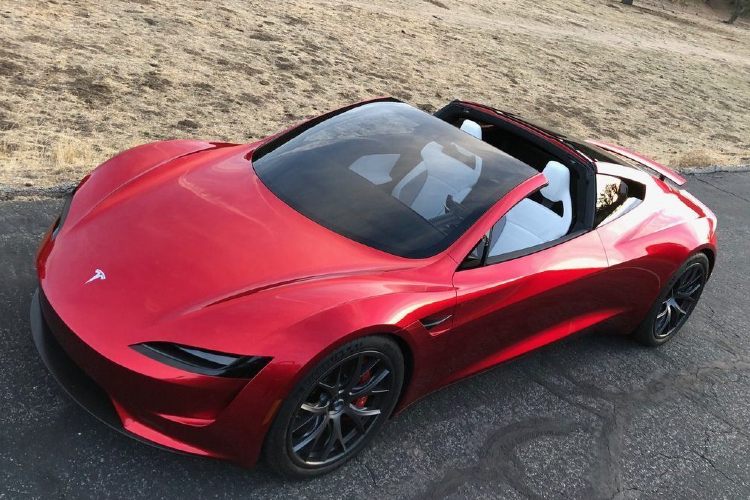 Musk said the car “will use a SpaceX cold gas thruster system with ultra-high-pressure air in a composite over-wrapped pressure vessel in place of the 2 rear seats. SpaceX option package for new Tesla Roadster will include ~10 small rocket thrusters arranged seamlessly around car. These rocket engines dramatically improve acceleration, top speed, braking & cornering. Maybe they will even allow a Tesla to fly.”

Now although we think he was joking about the flying part, this is not the first time he has mentioned attaching SpaceX thrusters to Tesla cars. In fact, he also expanded on the thrusters on Twitter in July 2019 when he teased that the “SpaceX thruster package will be subtle hidden behind the license plate.” ...very James Bond.

Now, the prospect of how fast a Tesla Roadster with SpaceX Package could reach 60 mph is mind-boggling – and it would blow all other supercars out of the water. That’s why Vanarama have created our 0-60 mph interactive drag race to show just how far ahead the new Roadster could be, including both the base model and the SpaceX Upgrade edition compared to the current fastest cars on the planet. 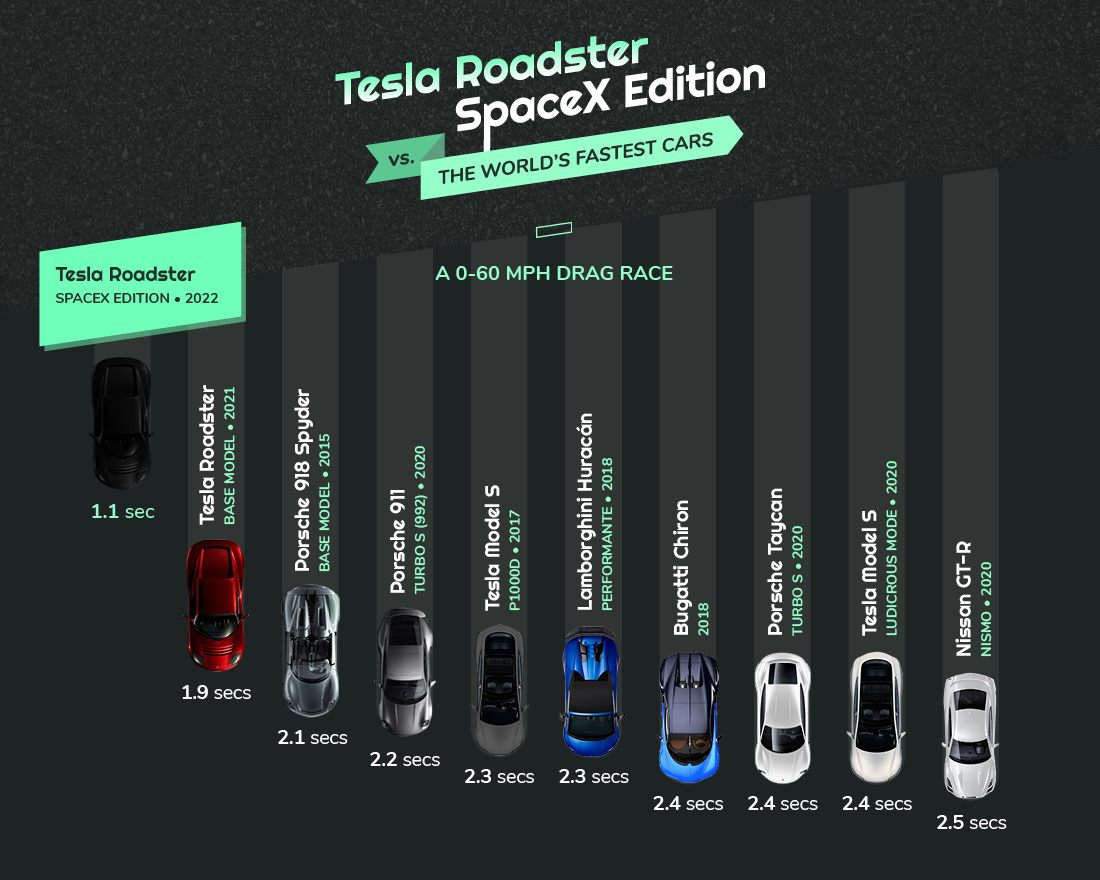 Now, Elon Musk is yet to announce the exact specifics of the Tesla Roadster SpaceX Package and how fast it will be, but that hasn’t stopped the online community from speculating. According to Engineering Explained’s Jason Fenske, the upgraded Roadster could hit 60 mph in an Earth-shattering 1.1 seconds.

How did he work this out? …by using Newton’s basic principles of physics.

According to website Teslarati, “Engineering Explained used some of Isaac Newton’s basic physics principles to determine that the Roadster could become one of the quickest cars in the world. By plugging in existing information that CEO Elon Musk has revealed about Tesla’s next-gen Roadster, host Jason Fenske determined that the vehicle will weigh roughly 2000 kg (4,400 lbs), which backs into acceleration g-forces of approximately 1.44 G’s.

Combined with cold-gas thrusters via an optional SpaceX Package that would enable the vehicle to hover, Fenske’s calculations puts the Roadster at 2.5 G’s of force from a standstill, which is close to Musk’s prediction. Applying the law of physics where velocity is equivalent to acceleration multiplied by time, Tesla’s next-gen Roadster, with optional thrusters, yields a blistering 0-60 mph acceleration time of 1.1 seconds.”

This is how fast 1.1 seconds 0 - 60mph take off should look like with Space X package thrusters on the Tesla Roadster. Computer worked out physics and then visualised in a render animation. Not sure how much gas but threw the effect in anyway. Enjoy @elonmusk #tesla #spacex pic.twitter.com/VzMukQPT2E

At 1.1 seconds, the Tesla Roadster SpaceX Package would be the fastest car to 60 mph on the planet by quite some distance. Here’s how it would compare to the top 20 current fastest in the world.

We can’t wait until the all-new Tesla Roaster is released, and we can finally see the SpaceX cold-gas thrusters in action. Until then, you have our 0-60 mph interactive drag race to keep you entertained. Watch out for the Tesla Roadster base model, which hits 60mph in 1.9 seconds according to Elon, and the Tesla Roadster SpaceX Package edition which hits 60 mph in 1.1 seconds according to maths.

Alternatively, make sure to bookmark the Vanarama blog page for more interesting automotive content and check out our car leasing special offers page to find your next ride.