The Most Memorable Way To Name A Motor

Automotive nomenclature has always been a rather confusing subject. Some brands opt to name their cars after places in Spain, such as Seat. Some name their cars to avoid rude translations in other languages, such as the Honda Jazz, and some brands such as Audi name their cars with what some might say is a rather dumbfounding array of alphanumeric.

Cadillac has previously announced that they will be switching from their current alphanumeric naming system such as the CT6 and XT5 in favour of 'real names' such as the Escalade and Eldorado in 2022. This got us thinking. Does an array of letters and numbers make a car harder to remember than one that has a distinctive, unique name?

To find out, Vanarama launched a survey asking the UK public which cars they would recognise if they were to drive by them, including a mixture of cars with 'real names', and cars with a series of numbers and letters.

Along with the survey, Vanarama also analysed 253 cars from 45 of the world's most popular car brands so see the type of nomenclature they employ and what is the most likely format and inspiration for your car name. 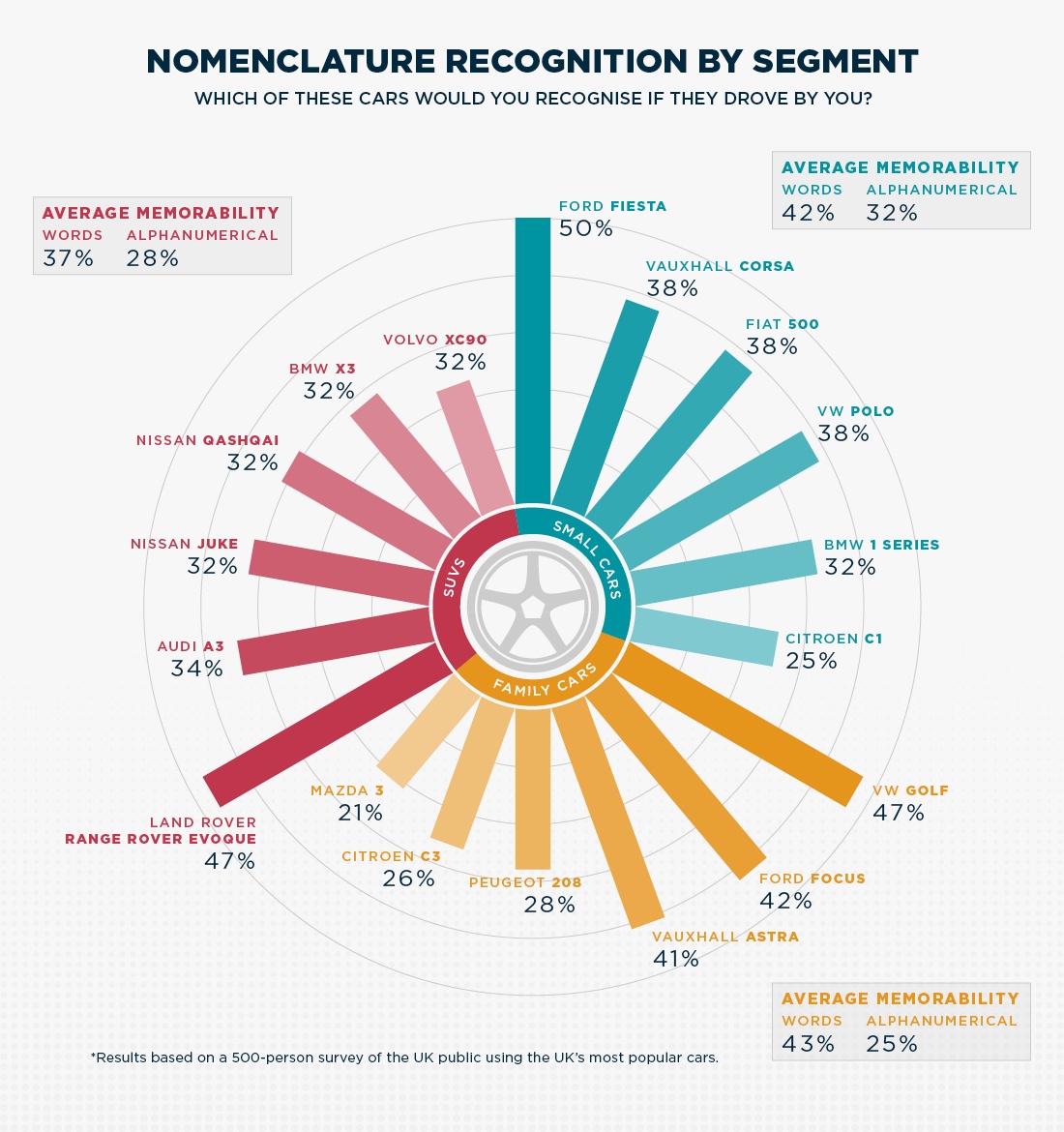 We picked out the UK's most popular cars in the small car, family car and SUV segments and asked UK motorists "Which of these cars would you recognise if they drove by you?". The aim of this was to see if the mention of the car name would jog the person's memory of what the car looked like, and we found a clear difference in the two types of nomenclature. In all three segments, 'real names' won combinations of numbers and letters by quite some margin.

On average, Family cars showed the biggest disparity, showing 'real names' are nearly twice as memorable as their alphanumeric counterparts in that segment, beating them with a memorability rating of 43% to 25%. Although the 18% difference may not seem like a big deal, consider the number of lost sales that an inability of consumers to remember a car's appearance may result in because of their name. This may translate into a substantial shortfall for the company.

For example, an 18% increase in sales for Mercedes-Benz, who strictly order their car models alphanumerically, could result in an extra 429,000 cars sold every year.

Even Within The Same Brand, 'Real Names' Can Be Twice As Memorable As Numbers & Letters 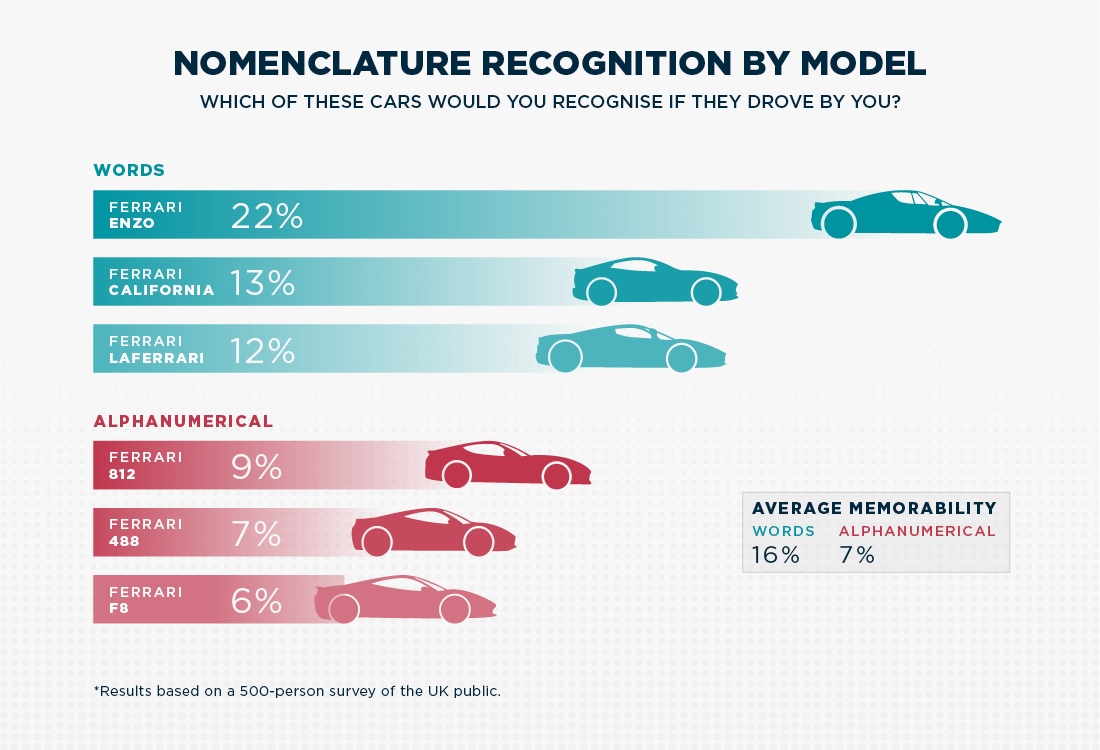 We also wanted to make our research as fair as possible, so we tested if 'real names' would also be better remembered than numbers and letters within the same brand. Do the brands themselves make a difference, and will we see a different result than our previous findings above?

To find out, we choose Ferrari as it's one of the only brands that employs a mixture of both in its automotive nomenclature evenly. We asked the public the same question, "Which of these cars would you recognise if they drove by you?" but this time only included a mixture of Ferraris with the various different forms of nomenclature.

The results went in the same direction, but this time the winner was even more obvious. On average, the Ferrari Enzo, California and LaFerrari are over twice as memorable than the Ferrari 812, 488 and F8. This backs up our initial findings that cars with a unique name are considerably more memorably than those names with a series of numbers and letters. 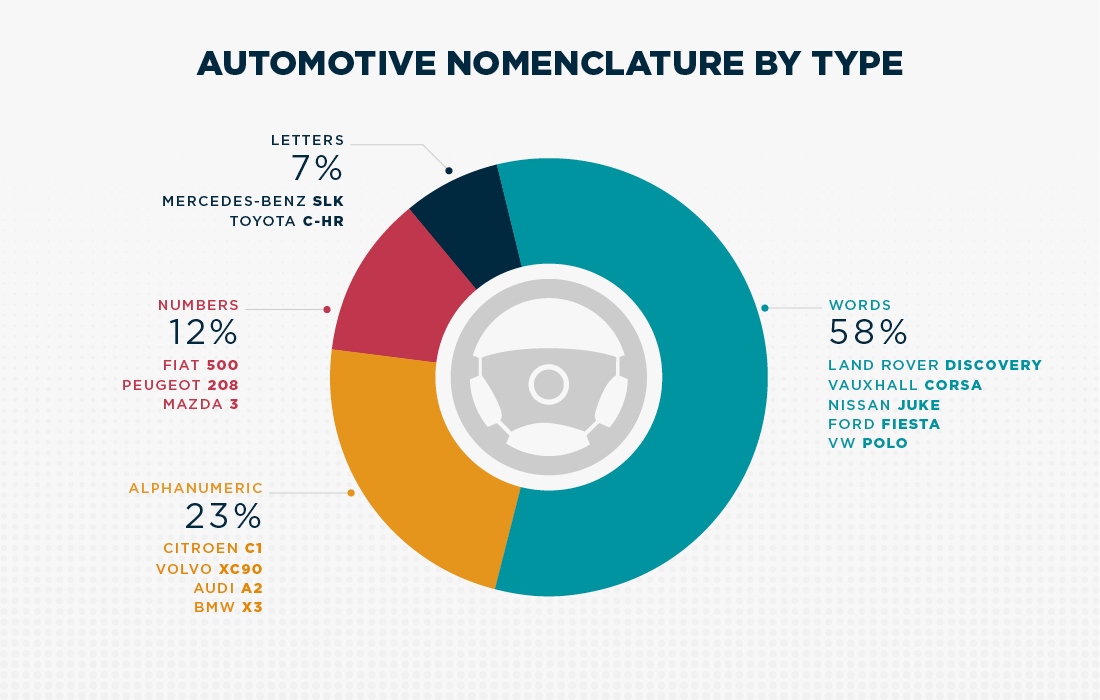 Following on from our findings, the Vanarama team analysed 253 cars from 45 of the world's most popular car brands to see which was the most popular method of automotive nomenclature that exists today, 'real names' or a combination of alphanumerics.

We found that 58% of the cars we analysed have unique names such as Mini Countryman, Aston Martin Vantage and Renault Megane. This fits in with our research that naming a car in this way provides the biggest chance that your car will be remembered and recognised in the minds of the public.

The rest of the 42% is made up of alphanumerics which consists of a number and letter combination such as the Audi A1, numbers alone such as the Peugeot 208 and letters alone, such as the Ford GT.

'Real Names' Are Most Likely To Be Inspired By Locations, People And Functionality 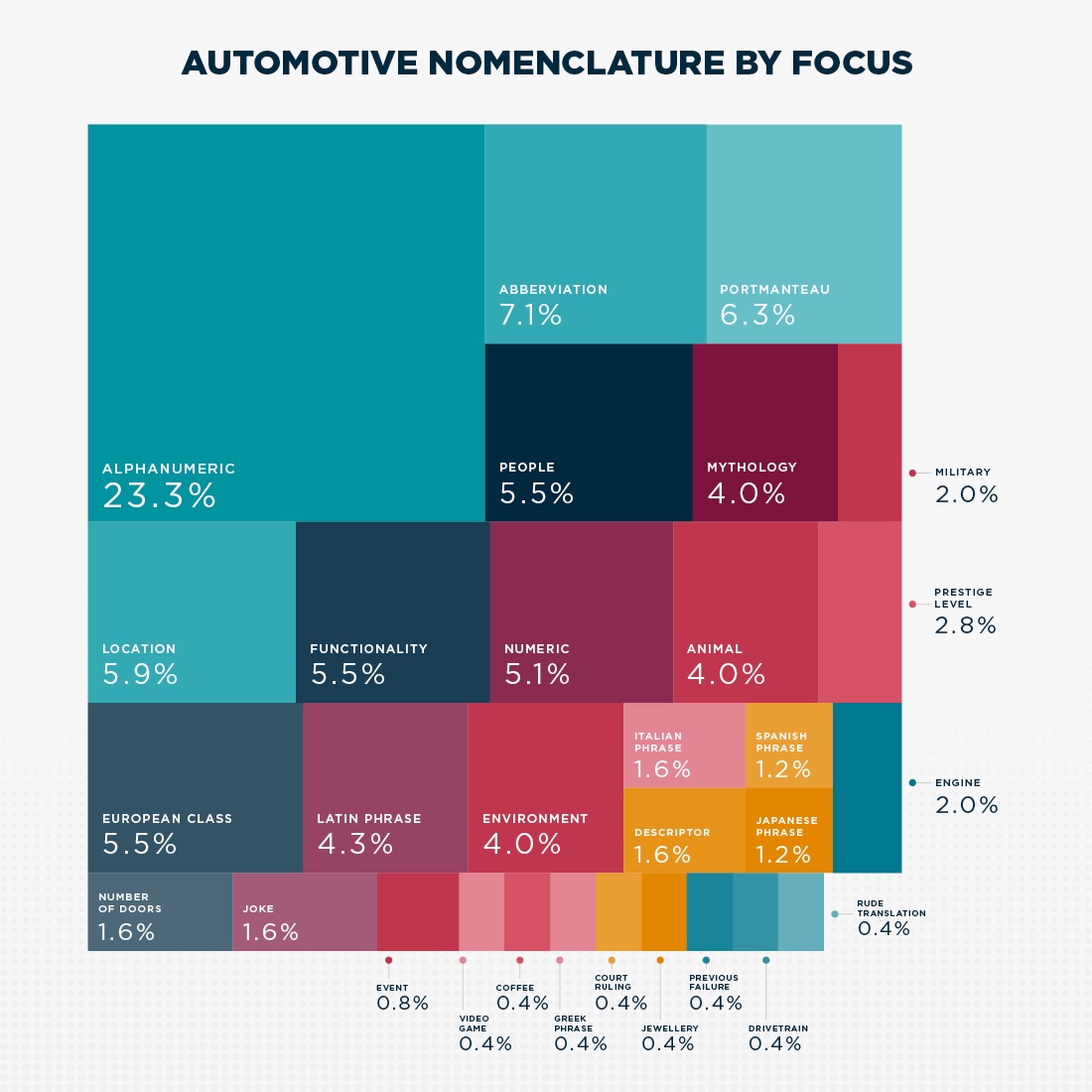 Lastly, we wanted to take a deep dive into what is most likely format and influence on a car name that is not alphanumerics, so we're focusing on only unique words and phrases that came up a car name. Our research found that the most popular way to name a car with a 'real name' is after a location. Seat is an excellent example of this, with all but one of its cars named after town and cities in Spain.

There are other examples, such as the Alfa Romeo Stelvio, which takes its name from the famous Stelvio Pass in Italy – a popular destination for automotive thrill seekers. Other popular topics to name cars after are people and Latin phrases.

Perhaps one of the most unconventional ways to name a car, or to be more accurate a selection of cars, was implemented by Elon Musk, the owner of Tesla. The Model S, Model 3, Model X and Model Y are meant to mirror the word S3XY.

Whilst we let that information sink in, why not browse our current car leasing deals?

Related Articles
Revealed: The Most Expensive Car-Related NFTs
How much money do you think people would spend on a car they couldn’t drive? The answer? Millions...Read More
What Symbols On An Electric Car Dashboard Actually Mean
The symbols on electric car dashboards can be very different from combustion-powered vehicles...Read More
Electric Car Technology Not Available On Petrol Cars
Electric vehicles are fast becoming the superior ride, and the reasons are numerous...Read More
This website stores cookies on your computer. These cookies will allow us to remember you and your preferences.
We use this information to improve your browsing experience.
To find out more, please read our
cookie policy.