There’s a great choice of excellent small vans out there, but 2 that will keep popping up are the reliable Ford Transit Connect and the platform-sharing Citroen Berlingo - 2 vans that have won lots of industry awards and regularly top the small van sales charts. Vanarama Van Experts takes a look at each van in depth to see if there’s a clear winner, or if it’s just too close to call.

Just because the Citroen Berlingo and Ford Transit Connect have been around for a while, it doesn’t mean they’re dated. Both manufacturers have regularly refreshed them, in terms of styling and equipment levels, not to mention the power units under the bonnet.

The Ford Transit Connect was originally introduced way back in 2002, although the new model launched in 2013 and was pretty much ‘all new’ with only a tenuous connection to its predecessor. The van had a further refresh in 2018 and Ford continues to make subtle improvements on an ongoing basis.

The Citroen Berlingo has an even longer history, the first vans being built in 1996. It’s had a number of updates over the years with the last major one in 2019 as it moved to the PSA Group’s EMP2 small van platform. It’s now one of 4 vans (soon to be 5) built on that shared platform - but it certainly hasn’t suffered because of it.

To keep things simple, in this guide we’re just going to look at standard vans. It’s worth mentioning though that the Connect is also offered in people / goods-carrying combination guises, such as the Double Cab-In-Van (DCiV) and even the passenger-carrying, high-spec Tourneo, which is classed as a car. The Citroen can also be specified in Crewvan format, allowing lots of flexibility with capacity for up to 5 passengers (including the driver) and a decent loadspace. 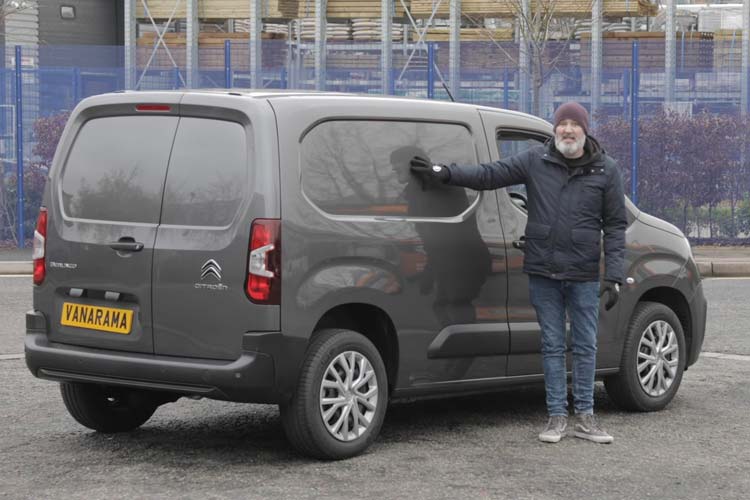 When you remove all those alternates, there’s not too much choice in bodystyles with either van, both being available in just the 2 lengths and a single height. Transit Connect L1 can take a load length of 1786mm whereas the Berlingo (confusingly called ‘M’) accommodates 1817mm. Opt for the L2 Ford and you’ll get 2152mm for your money, and the ‘XL’ Berlingo can take a very similar load length of 2167mm.

If load height is important to you, 1269mm is on offer in the Ford, compared to a maximum of 1270mm in the Citroen. And load volume-wise, the L2 Connect has 3.6cu/m of capacity, slightly beaten by the Berlingo XL’s 3.8cu/m. It’s important to stress that these dimensions are purely the loadspace as it is – any ‘through bulkhead’ or underseat storage facilities offered are not included in the measurements. 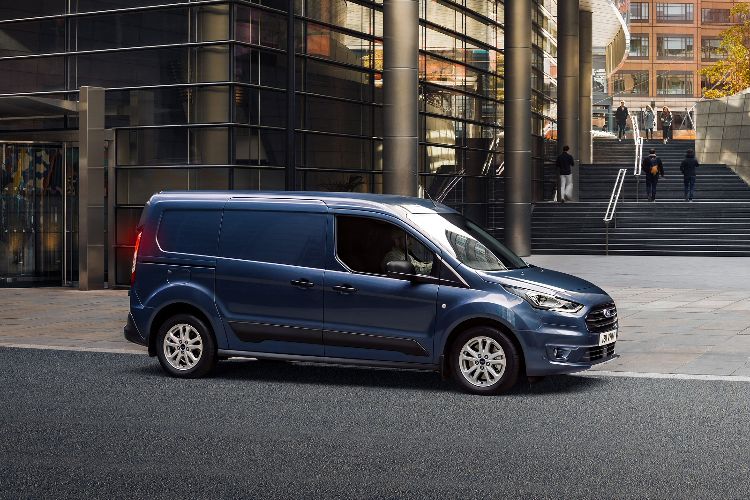 You get the fairly typical single side loading door and twin rear door arrangement to access the loadspace on both vans, although there’s an additional side door on the XL Berlingo. If the side door width is important to you, it’s worth comparing the Citroen’s dimensions of 641mm (M) and 675mm (XL) with the Fords 433mm (L1) and 660mm (L2). Although the Connect’s door aperture is actually wider than these measurements, not all the width is usable due to the bulkhead getting in the way.

Even though these vans don’t carry the volumes that their larger siblings can take with ease, they can still be called upon to take some serious payload. There are some variances in the amount of weight the Transit Connect can cope with depending on which van you decide to go for. With GVM (Gross Vehicle Mass) options ranging from 2030kgs to 2501kgs, the payloads on offer range from 679kg up to 982kg. Things are a bit more straightforward with the Citroen Berlingo payloads that sit in a much narrower band of 940kgs to an impressive 1009kgs. 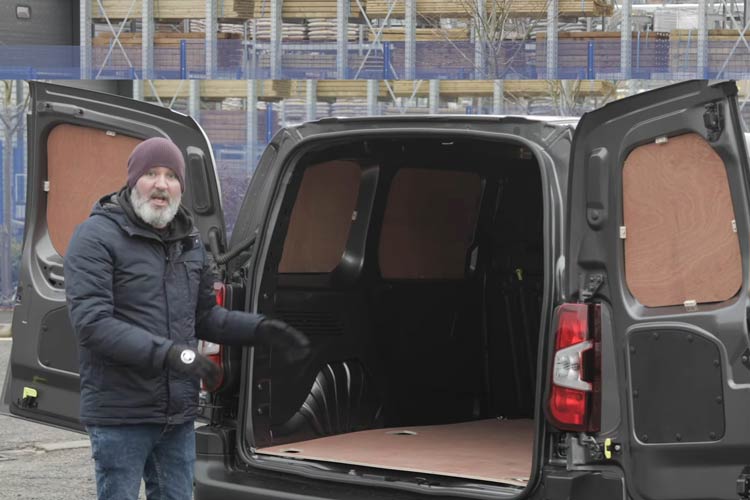 Towing capacity is something often overlooked in small vans but is a vital consideration to many van owners. Some models of the Berlingo will pull a 1200kg braked trailer, while the Connect can tow between 1200kg and 1500kg, depending on the model.

Unless you go for the 1.0-litre 100PS EcoBoost petrol Transit Connect, they all come with the same 1.5-litre EcoBlue Euro 6D diesel engine at outputs of 75PS, 100PS or 120PS. CO2 emission levels on the 120PS version are surprisingly low at just 109 g/km. You can (with the diesel unit) opt for a 6-speed manual or 8-speed automatic gearbox, great for relaxing driving in an urban environment.

Citroen has always had a reputation for offering reliable and economical diesel engines and the 1.5-litre BlueHDi unit fitted to the latest Berlingo has been highly praised by independent experts. It’s offered at just the 2 outputs - 102HP and 131HP - and, like Ford, the French company provides the option of a petrol unit, the 110HP PureTech. If you go for the 131HP diesel, you can specify an 8-speed automatic gearbox in lieu of the 6-speed manual.

If low emissions are important to you, the Berlingo might prove to be a little underwhelming compared to the Connect, the best any of the diesel units can achieve is 144 g/km. Official combined fuel consumption figures for the Connect are as low as 62.8mpg, the Berlingo is a little thirstier with a best of 50.7mpg on some automatic versions.

Although we’re not covering it in this comparison guide, the Berlingo is available as a fully electric van, the (no prizes for guessing) e-Berlingo. We’ve reviewed the very similar Peugeot e-Expert in depth here, so take a look. Ford is not currently offering an electric Connect, but watch this space.

There are no less than 6 trim levels to choose from in the Transit Connect range; Leader, Trend, Limited, Sport, Active and MS-RT. Entry level Leader is a little sparse when it comes to equipment but you do get a DAB radio and electric front windows. Trend adds body coloured front bumpers, front fog lights and a heated windscreen and in the cab you’ll see a 4.2-inch multimedia screen. Go for the Connect in Limited trim and the exterior is enhanced by 16-inch alloy wheels and some more body-coloured items such as door handles and door mirrors. Inside, air conditioning, cruise control, heated seats and a leather trimmed steering wheel make things just that bit more comfortable for the driver. Connect Sport, based on Limited spec, is designed for those who really want to stand out in a crowd of more bland and faceless vans. 17-inch 5x2-spoke machined alloy wheels complement the sports styling kit containing front, rear and side sport stripes, aluminium roof rails, a front and rear lower spoiler and chromed rear bumper moulding. Connect Active, also an upgrade from Limited, is meant to appeal to those who want a stylish van but which is capable of going off the beaten track. The alloy wheels are upgraded to some macho 17-inch 5-spoke stunners, and the ride height is increased at both the front and rear. Inside, the media unit is upgraded to Ford’s SYNC3 6-inch touchscreen which includes Apple CarPlay and Android Auto smartphone integration.

All Transit Connects have an integrated modem. The FordPass unit doesn’t just offer the driver and passengers a WiFi hotspot, it also provides a range of connectivity services such as remote vehicle health monitoring, remote start and locking, location reporting (great when you’ve forgotten where you’ve parked it) and an alert if the van is moved or opened without authorisation. 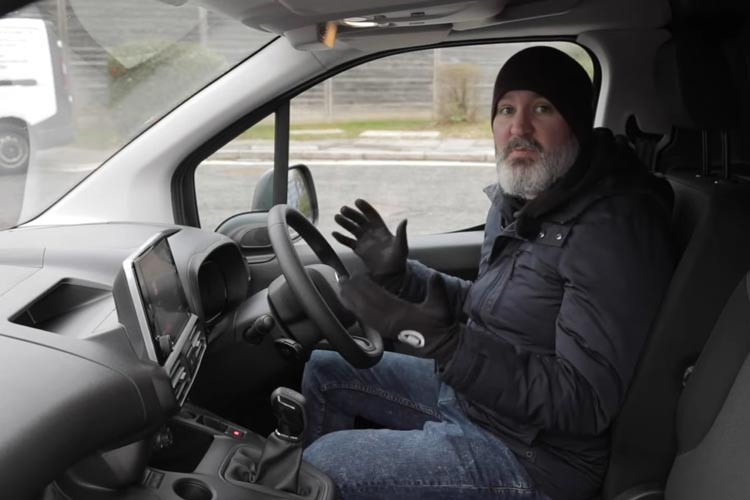 The Citroen Berlingo’s trim levels are, well, slightly more complex. There are actually 4 and it’s not straightforward - the X Pro is the base van, and like the Connect Leader there’s not a huge amount of bling, but you do get a DAB radio with a 5-inch black and white touchscreen, electric windows and door mirrors and rear parking sensors.

The Worker Pro model builds on this spec but with a driver who operates in more challenging conditions away from normal road surfaces in mind. Grip control, underbody protection, 16-inch wheels with mud and snow tyres and increased ground clearance, all demonstrate that a lot of thought has gone into making this the right choice for the more demanding operator. You even get a 220-volt socket to charge those power tools.

The second mainstream trim point is Enterprise Pro. It adds to the X specification air conditioning, cruise control, an 8-inch colour touchscreen with that all-important Apple CarPlay/Android Auto smartphone integration, an alarm, some wheel trims and fog lights added to the exterior. You’ll also get the Extenso folding bench seat and load-through bulkhead.

Driver Pro is based on the Enterprise Pro spec, aimed at (you’ve guessed it,) the driver who demands all the trimmings. The display is upped to 10-inch and now includes satellite navigation. There’s not just front and rear parking sensors, you’ll also find side and rear cameras providing ‘tri-function’ rear and nearside visibility via a 5-inch screen. On the outside, 16-inch black alloy wheels are complemented by a body-coloured rear bumper, side rubbing strips and exterior door handles.

All Berlingos are fitted with the Citroen Connect remote access facility, and you’ll get a free 6-month trial of their Free2Move Connect telematics service.

I know I say this a lot, but there really is no clear winner here. From a load carrying perspective, the Connect and Berlingo are very similar. Engine outputs too are incredibly similar - especially when you consider that many will ignore the 75PS offering from Ford. The Citroen isn’t as economical as the Ford, and the French van certainly puts out more Co2.

Both vans also have their strengths when it comes to trim levels. The Berlingo Worker Pro is very well thought out and stands head and shoulders above the Connect Active for off-road use. But, for those who really want to stand out from the crowd, Citroen doesn't really put up a challenge to the Connect Sport or MS-RT models - although their status as ‘practical commercial vehicles’ is up for debate.

I’m going to leave this one up to you, but whichever van you decide is the right solution for your needs, check out the Vanarama Citroen Berlingo or Ford Transit Connect leasing offer pages for the best lease deals on your next new van.