After some severe disruption thanks to Covid19, the Commercial Vehicle Show returned last year for the first time since 2019. It was a much smaller affair than usual, so there were high hopes that the 2022 event might see a return to the previous heady days.

I’ve been going to the CV Show for many, many years – for those of us involved in the industry it’s the event of the year, where all manufacturers (not just van, but pickup truck too for those who like their commercials big) competed with each other to have the best stand, attracting show visitors so they can show off their new products.

A preview of the exhibitor list was circulated a few weeks ago we hoped that there would be a good turnout of manufacturers; after all, most have got something to shout about as they all work towards full electrification of their ranges. Sadly, it wasn’t to be – just 6 companies choosing the exhibition to showcase their vehicles. But, any disappointment was tempered as those who had invested in the show had put on a superb effort. Just when you thought the Ford stand couldn’t get any bigger... it got bigger. The blue oval had a lot to shout about. The recent rebranding of the commercial vehicle division to Ford Pro (encompassing all aspects of commercial vehicle mobility and support) was evident everywhere, with audio visual presentations explaining the concept.

Although it was unveiled a little while ago now, the all electric E-Transit was probably the star of the show, creating lots of interest, although competing with it for attention were examples of the new Ranger, together with the brutal, high performance Ranger Raptor. These trucks looked stunning, and a quick peek into the cab saw the huge, centrally mounted display screen which completely dominates the dash. You can order a Raptor now for delivery later this year, but the mainstream Ranger won’t be available until 2023 unfortunately.

As a dedicated van man, I tend to walk past passenger versions of commercial vehicles, but whilst at the show I found myself taking a good look at the Tourneo Connect. Why? Because this ‘car’ version is brand-new and is essentially the ‘new’ Connect, built on a shared platform with Volkswagen who use it for the Caddy. We’ll see the van version in due course but this is a tremendously good looking vehicle, with a very tidy interior too.

Also on show was a special edition of the MS-RT Ranger (based on the current model) with some very eye catching graphics, and a double cab version of the MS-RT Transit Custom. Taking their usual position in a slightly smaller hall, Toyota (proudly displaying their new ‘Toyota Professional’ branding) had on show their full range of vehicles, including the Hilux, Proace and Proace City, in electric form too.

At the 2021 show, Toyota tested the water with a commercial version of the Corolla Hybrid car. This is now in production, and was centre stage on the stand. I had a chat with the company’s LCV Manager, Gareth Matthews who said that they had been blown away with interest in the van, not just from fleets but from smaller businesses wanting a tax efficient, cost-effective and green solution for moving an individual and small load around the country. Matthews said that the appeal of a ‘car like’ driving experience hadn’t been lost on business owners whose drivers weren’t too keen on having a traditional van as their company vehicle. 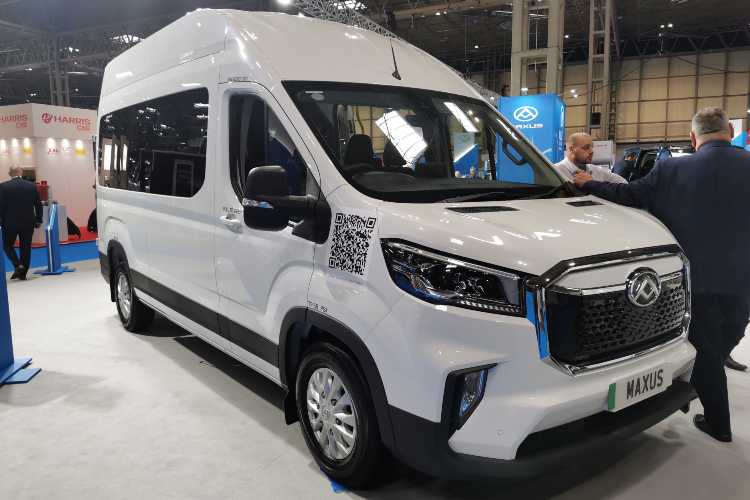 Another company with a huge stand, this time at the back of hall 5. The big news here was the unveiling of their new, all electric pickup, the T90EV. It wasn’t possible to crawl over or inside the vehicle but, the Maxus say that the truck has a range of up to 198 miles (WLTP City figures, not the normal ‘combined’). The payload of 740kgs will, unless there are any dispensations issued cause a few issues here in the UK due to the VAT and tax implications that hit pickups with a sub 1000kg carrying capacity.

It looks like we won’t see the T90EV here until 2023, and there’s no indication yet on prices or precise specification. I’m a little concerned about the vulnerability of the underfloor battery pack and the rear mounted motor, especially on off-road activities.

Otherwise, there were plenty of examples of the e DELIVER 3 and e DELIVER 9 electric vehicles, including a tipper version of the 3 and a minibus conversion built on the larger 9. It was good to see LEVC proudly displaying their very capable VN5 hybrid van. Despite being very familiar with the numbers and specification, I was really impressed in how the taxi body had been transformed into a proper commercial vehicle. The loadbay looks like it had been designed as a van at the outset, with nice straight sides and minimal intrusion from wheelarches, and the cab is up there with the rest – modern and looking very comfortable indeed. 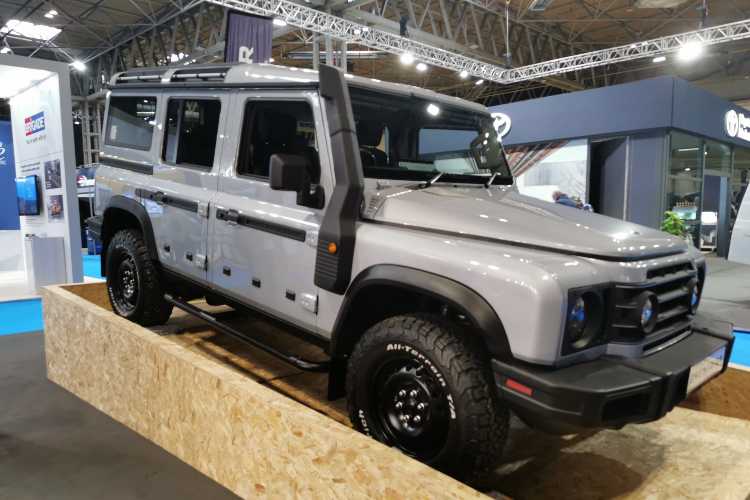 A first timer at the show, British company INEOS showcased their Grenadier, a tough offroader which bears more than a passing resemblance to the original Land Rover Defender. The manufacturer is now taking orders for the vehicle, which, they say is ‘modern, workhorse 4X4, engineered and built to world-class standards. It features a box section ladder frame chassis, permanent 4-wheel drive, 2 speed transfer case and centre locking differential included on all models. From launch, INEOS will offer a wide range of factory-fit options and an extensive choice of accessories’.

It certainly looks the business – can this relatively small company successfully produce and market a relatively niche and expensive product? Time will tell, I guess...

So, although there was some interesting product to see, industry contacts we spoke to were understandably curious as to why manufacturers such as the Stellantis group, Renault, Nissan and Mercedes-Benz had decided not to exhibit. Budgetary constraints? Possibly, and certainly in Mercedes case that was cited when the German company pulled out of the show a few years ago. Long lead times on vehicles due to the semiconductor shortage and other production issues? Potentially a reason, but, that situation won’t last forever, and customers are still placing orders knowing they might have to wait longer than they would have liked. In their usual position in the centre of Hall 5, Isuzu chose the show to demonstrate the versatility of D-Max pickup by displaying examples of the truck as used by some of their national fleet customers. These trucks all had specialist conversions and equipment fitted, the vehicles tailor made for use in specific applications. Also on show was the D-Max Arctic Trucks AT35 , looking particularly impressive with its raised stance, huge tyres and wider wheel arches.

A great show this year, but let’s hope that next year we see a return to most, if not all manufacturers showing us what they’ve got to offer.