The Ford E-Transit In Detail

The arrival of the Ford E-Transit has been a bit like waiting for Christmas - we knew it was coming, but the wait seemed like an eternity. It was announced way back in November 2020 and there’s only been a drip feed of information ever since. Vehicles have been taking part in trials with end users, and now 5000 orders have been placed without customers knowing the detailed specification or even accurate pricing. That’s why, with production vehicles starting to roll out of the Turkish factory, Vanarama Van Expert Tom Roberts has been digging through the details and looking at exactly what this game-changing van has to offer the UK’s van drivers.

Ford (under the Ford Pro banner - the company’s new commercial vehicle worldwide sales and after-sales business arm) has been criticised for being slow to come to market with fully-electric vans. In fact, they’re one of the last LCV manufacturers to bring to market a van that isn’t powered either partly or fully by fossil fuel. However, things are changing with Ford’s reveal of their plans to launch 5 fully-electric vans by 2024 (including the recently announced Ford Transit E-Custom), and you can bet that they’ll be offered with the latest tech - particularly regarding the power unit and battery combinations.

Ford’s main rival in the large-sized van sector, Mercedes-Benz, has been offering the e-Sprinter for some time now, but sales have been stifled by the limited range offered between charges - less than 100 miles, even in ideal conditions. Many van users have previously been loyal to these other big brands but, having wanted to move over to electric power but being unwilling to accept a modest range, the arrival of the e-Transit cannot come soon enough.

How Is The Ford E-Transit Powered?

The E-Transit features a single motor driving the rear wheels with a choice of power outputs equivalent to 183hp or a staggering 269hp - far more than any of the competition. You can see that Ford has really attempted to stamp some authority on the large electric van segment from the start. Interesting to note, however, is that the all-important torque output is the same on both options at an instantly-delivered 430Nm! I’ve not yet seen official performance figures, but a 0-62mph acceleration time of around 7.0 seconds has been estimated by some, a figure which (if confirmed) would mean it could hold its own at the traffic lights against some super cars of recent memory.

The 400-volt 68kWh battery pack is located under the loadspace floor, well out of the way. The rear suspension has been redesigned to facilitate the rear mounted motor and is fully independent, improving traction and handling. There are 3 selectable driving modes – Normal, Eco and Slippery – self explanatory really, with the power delivery being tailored accordingly.

How Far Can The Ford E-Transit Travel On A Single Charge? 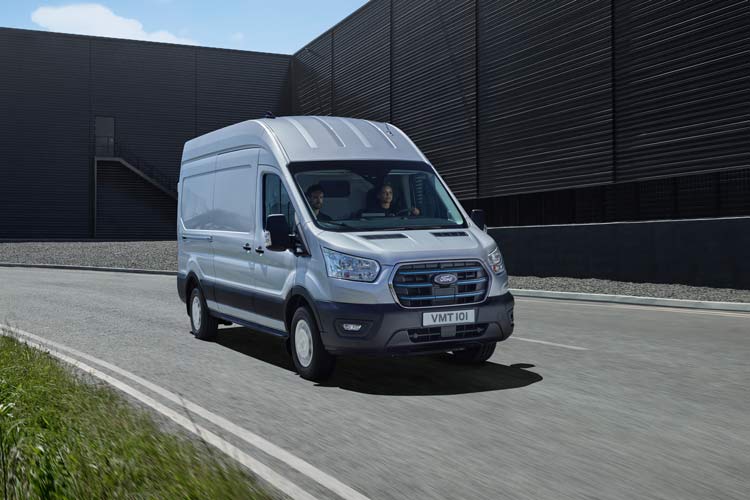 So many factors can affect the range of an electric van, but the official WLTP combined driving cycle range of the Ford E-Transit is a commendable 196 miles. To its credit, Ford is suggesting that realistically in general day-to-day use, a ‘dependable’ real-world range of at least 100 miles should be achievable. This might sound like a hefty hit from the official figure, but bear in mind that the official test numbers are gained by all manufacturers with a van with no load and with a pre-conditioned cab environment (the heater or air conditioning being used to get the cab interior to a comfortable level whilst the van is connected to a charger). Ford reckons you’ll get the 100-mile minimum no matter how much weight you’ve got in the back, in any weather and with a 5-year-old battery.

What Are Ford E-Transit Charging Times?

Most home wallbox chargers are rated at 7kWh and plugging a Ford E-Transit into one of these will see a full charge taking around 11.5 hours. If you have access to a higher-rated 3-phase facility at home or work, this will bring the charging time down to around 8 hours. DC fast charging can achieve a 15% to 80% charge in as little as 34 minutes.

What Body / Weight Combination In The Ford E-Transit Offered In?

While some manufacturers restrict the electric versions of their large vans to 1 or 2 body styles, Ford has been more generous, and you’ll be able to order the van in almost any of the sizes it’s offered in diesel-powered form. There are L2, L3 and L4 lengths, H2 and H3 roof heights and even an L3 double cab-in-van (DCIV) format. Chassis cab versions also mean that customers wanting an electric Luton van or dropside truck aren’t left out either.

Available payloads max out at 1758kgs, made possible by Ford offering the E-Transit at GVMs of up to 4250kgs. Normally a van at this weight wouldn’t appeal to the majority of users - anything over 3500kgs means additional driver licensing requirements and an HGV operator’s licence. However, thanks to a dispensation for fully-electric vans, providing a small amount of additional driver training is undertaken, a driver with a conventional category B licence can operate these vans as if they were plated at the 3500kg figure!

What Trim Levels & Driver Technology Does The Ford E-Transit Provide? 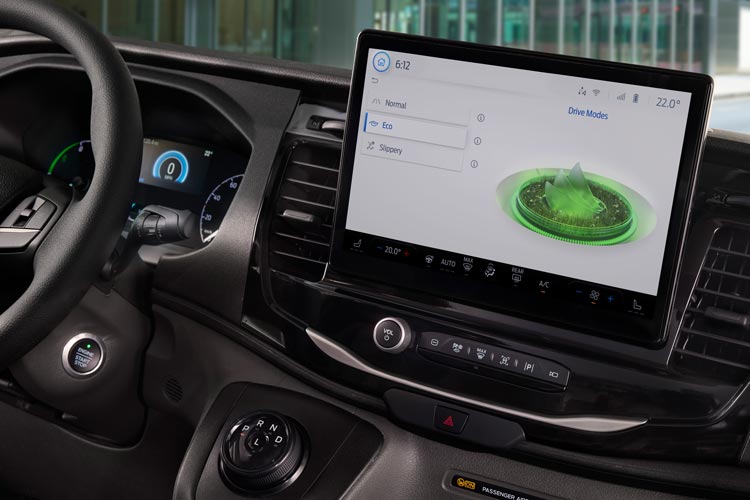 This is where Ford has made some changes from the diesel-powered vans. Although the top ‘Limited’ specification hasn’t been carried over to the E-Transit, the ‘Leader’ and ‘Trend’ vans have a higher equipment level in comparison to their fossil fuel siblings.

In all the vans, step into the cab and you’ll be greeted with a huge 12-inch centrally-mounted touch screen that houses Ford’s latest version of the SYNC multimedia platform, now at version 4. It provides a DAB radio together with Android Auto and Apple CarPlay smartphone integration, and it’s also what you’ll use to control the ventilation inside the cab. There’s even a live display that shows how efficiently you’ve been driving in the form of graphs.

Instead of a gear lever, you’ll use a rotary dial to control the single-speed transmission. On the instrument panel, the space no longer used by the diesel van’s rev counter is utilised by a power use indicator. Remaining charge is displayed by what used to be the fuel gauge, and miles remaining are shown in digital form on the trip computer display.

‘Leader’, despite being the base spec, also has air conditioning as standard, together with a heated windscreen, heated seats, powered door mirrors and an electric handbrake. Move up to ‘Trend’ and the SYNC4 screen will now offer the Ford Connected Navigation system and cruise control, parking sensors at the front and rear, and a moulded load floor liner. Some additional safety tech is also added, including lane keeping assist and a collision mitigation system.

What Other Technology Is Provided In The Ford E-Transit?

The Pro Power Onboard option - not a standard offering, but one you might consider adding to your vehicle if you choose to lease one - provides a huge 2.3kW of power without a generator. So, using this clever piece of tech will provide you with more than enough juice to charge up tools and directly power many other pieces of equipment. Other additions include reverse brake assist – this uses a camera and sensor which can detect pedestrians, cyclists and static obstacles when reversing and delivers a warning before automatically stopping the van. You can also specify a 360-degree camera, offering a bird’s eye view which is displayed on the 12-inch screen.

All E-Transits are also supplied with the FordPass Connect modem, allowing for always-on connectivity and remote access with a lifetime subscription to FordPass Pro or Ford Pro Telematics Essentials. It also connects to the cloud allowing for over-the-air software updates that keep the tech up to date without needing a dealer visit.

What Are The Ford E-Transit’s Running Costs?

Ford has stated that over a 3-year or 100,000-mile period, servicing, maintenance and repair (SMR) costs for the E-Transit will be 40% lower than the equivalent diesel engine models - primarily because there are far fewer service items needing routine replacement and regenerative braking (when the motor helps to slow the van down and regain charge in the batteries) reduces wear on the vehicle’s brake components.

Servicing is required just once a year with no limit on mileage and the van has a 3-year / 100,000-mile warranty with 8 years of cover for all high-voltage electrical components. The battery is guaranteed to retain 70% of its capacity (65% on chassis cab models) for the same period, a little less than the 80% offered by some other manufacturers.

Is The Ford E-Transit Expensive?

No. Ford has priced the van competitively even before the government electric vehicle grant has been taken into account. Combine this with the excellent predicted residual values that leasing companies are anticipating and you’ll soon be able to lease a new Ford E-Transit at monthly payments that will make the van a compelling proposition indeed. So, watch this space!

If you enjoyed this article then take a look at this one about Tom’s experience driving a Ford Transit Custom PHEV to Bath and back, and if you’re in the market for a new van take a look at our Hot Offer leasing deals.