Here at Vanarama we understand how important our vans are to tradespeople up and down the country. They are the lifeblood for thousands of businesses and provide a means for traders to make a decent living.

Having a van or tools stolen can have a massive impact on trade, especially just before Christmas. To help customers, we quizzed 45 police forces across the country to reveal where van owners are most likely to be a victim of vehicle and tool theft.

The findings from the investigation make disappointing reading. Police data revealed tool theft jumped 8% from 2017 to 2018, while vehicle theft jumped 27% in the same period. Given the rise, we have created a map detailing the figures and urge van owners to prioritise the security of their vehicle, and the tools that provide their livelihood.

According to the research, forces received 3,513 cases of tool theft from vans in 2018, this equates to roughly 70 cases a week, or 10 cases every day. When it comes to worst offending areas, police forces in Cambridge (820), Staffordshire (528) and South Yorkshire (307) received the highest number of tool theft cases in 2018.

As part of the investigation, we also asked forces to disclose the number of vans to have been reported stolen. The figures revealed that 2,850 vans were reported stolen in 2018, a 27% increase from the previous year, equating to 55 vans every week, or eight vans a day. 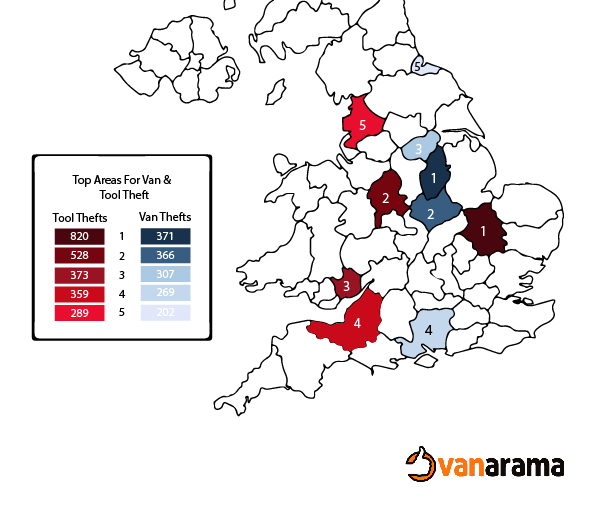 Interestingly, during the investigation we discovered many police forces were ill-equipped to handle our FOI requests. Of 45 forces, only 15 were able to supply complete data on tool thefts from vans, with Leicestershire and Northamptonshire among those who wouldn't supply a split between thefts from vans and vehicles. Merseyside and Durham could not differentiate between thefts of vans and vehicles, while Essex Police and Durham were unable to supply any data to either request.

Note: The data included in the graphic is representative of the information shared by each police force that responded to the FOI request. Unfortunately, not every police force was able to cooperate with the request. In this instance, we've had to mark their contribution down as N/A.

Need A Hand To Protect Your Van?

No one wants to be a victim of theft, so here's how you can reduce the risk and protect your vehicle…