Toyota is best known for producing the iconic Hilux pickup truck, but is becoming an increasingly big player in the UK van market - the Proace City small van is just one reason why. It moved Toyota from being a ‘single pickup, single van’ company and turned them into a one-stop light commercial vehicle provider. So, now we know what the Proace City has done for Toyota, Vanarama Van Expert Tom Roberts is here to take a look at what the Proace City can offer drivers.

In 2019 I was invited by Toyota to attend a press briefing in Rome at which they confirmed that, not only were new models of their Proace medium van about to launch, the company was joining the small van sector with a new van called the Proace City. This itself was big news, but even bigger was that both the Proace and Proace City would share the Stellantis van platforms with Peugeot, Citroen, Vauxhall and Fiat vans!

Both vans launched in diesel configurations before electric versions of each joined the market in 2021/22. Thanks to the wonder of platform sharing, the Proace City and Proace City Electric small vans are already successfully established as the Citroen Berlingo and E-Berlingo, the Peugeot Partner and E-Partner, and the Vauxhall Combo and Combo-E. And when you consider that many big fleets operate at least 1 or more of those other vans, it just goes to show how well they perform and that the Proace City is clearly a reliable small van.

Toyota has made a few changes to the Proace City range since its introduction, tweaking the offering to remain competitive in an ever-changing marketplace. In particular, engines, power trains and trim levels have been updated and even the warranty has been changed. Let’s dive into the details.

What Body Types Is The Toyota Proace City Available In? 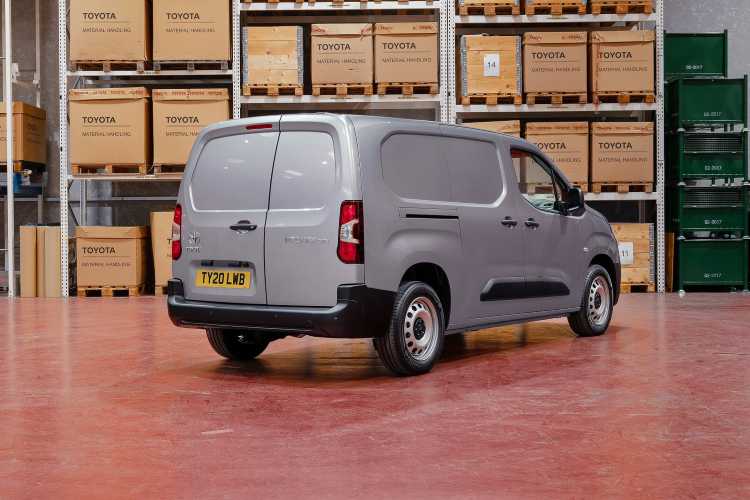 The Toyota Proace City comes in 2 body lengths named ‘short’ and ‘long’, with just a single roof height available across the range. You can access the cargo area through the twin side loading doors that come as standard, or the twin rear doors. Load lengths are 1817mm and 2167mm respectively, giving drivers load volumes of 3.3 or 3.9 cubic metres. These dimensions can be increased when the Smart Cargo system is used - this is simply a hatch in the bulkhead - allowing for loads as long as 3440mm in the Proace City ‘long’ and increasing the load volume by 0.4cu/m.

What Payloads Can The Toyota Proace City Carry? 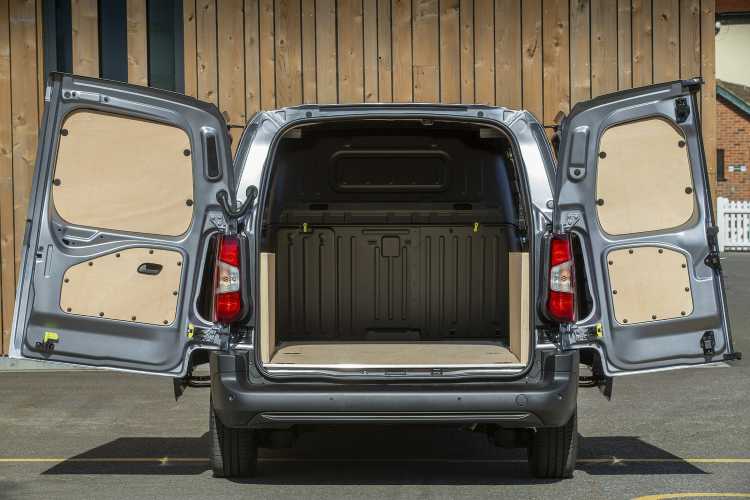 Payloads in the Toyota Proace City are pretty decent for a small van. The diesel Proace City offers either just over or a fraction under 1000kgs depending on bodystyle/engine combination, while the electric van gives 800kg on the short version or 750kg on the longer body. If you need to tow, a braked trailer of up to 1200kg can be pulled on the diesel van and a useful 750kg of towing capacity is available on the Proace Electric - not something that can be taken for granted on electric vans. Check out our dedicated article for more info on EV van payloads.

What Diesel Engines Are Available In The Toyota Proace City? 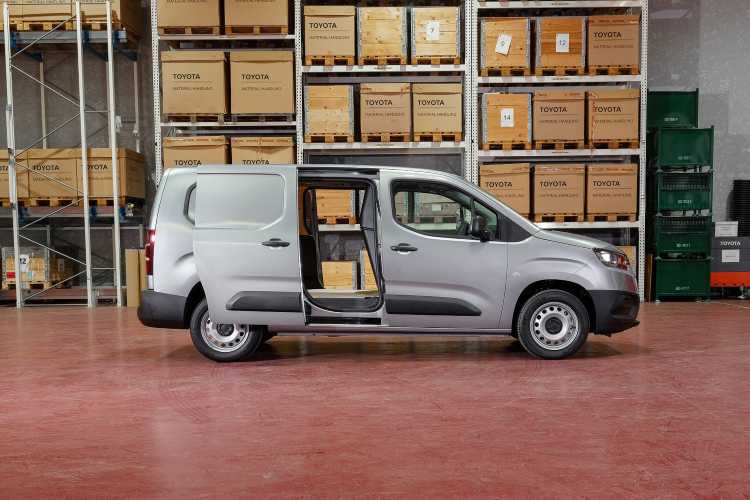 The Toyota Proace City’s proven and reliable 1.5 litre diesel engine has been around for a while now, and is offered in 100hp (only on the short model) and 130hp outputs - the 75hp version has been discontinued. Go for the 130hp unit and there’s the option of an 8-speed automatic gearbox instead of the standard 6-speed manual gearbox. 0-62mph acceleration times are 11.5 seconds for the 100hp and 9.8 seconds with the higher output engine. As with most diesel engines, AdBlue is required and the 17-litre tank offers a decent range between refills.

What Battery Size & Motor Does The Toyota Proace City Electric Have? 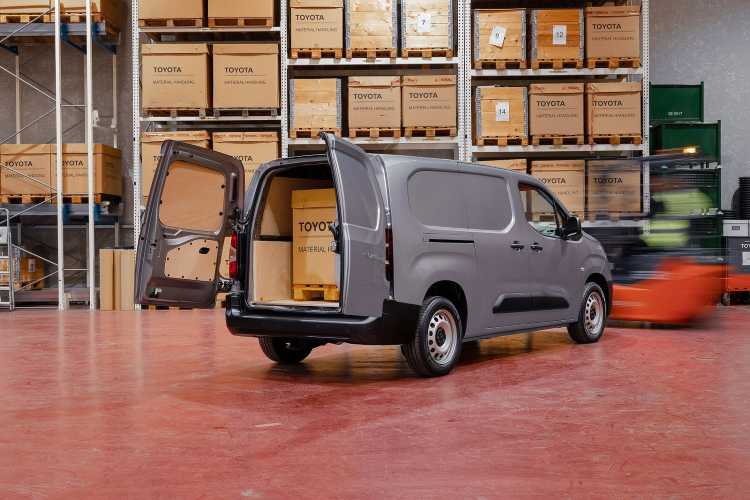 The Toyota Proace City Electric has a 100kW (roughly equivalent to 136hp) electric motor powered by a battery pack of the same rating. On the WLTP combined cycle, the van has a range between charges of 161 miles and the 0-62mph sprint will take 11.2 seconds. A 100kWh public charger will get you to 80% of capacity in as little as 30 minutes with a 7kWh home wallbox charger taking (a very reasonable) fraction over 7 hours. If you have access to an 11kWh chargepoint at home or at work, you’ll need to specify the optional 11kWh onboard charger to take advantage of this charging speed.

To help you make the most of the electric power, there are 3 driving modes available selectable by a switch in the centre of the dash. The default setting is ‘Normal’, restricting motor power to 80kW. ‘Eco’ further reduces the motor’s power draw to 60kW to prioritise range over performance. If you want the full 100kW of power at your foot, you’ll need to switch to ‘Power’ mode. 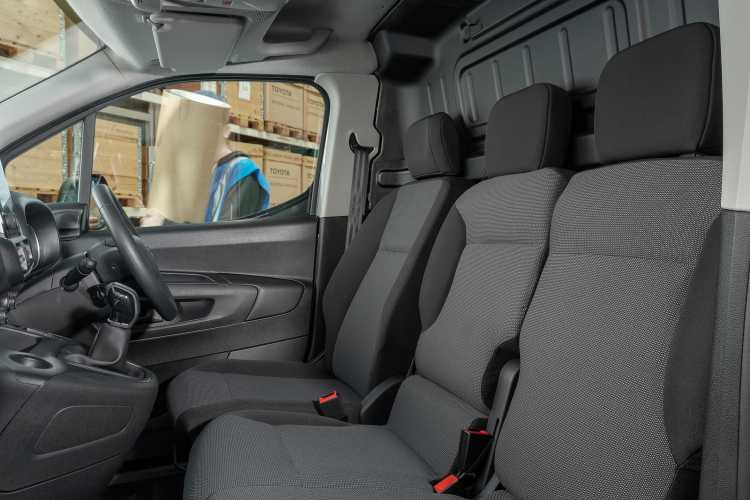 In the latest versions of the Toyota Proace City, you’ve a choice of a single or twin passenger seat. Be aware that the centre seat, should you opt for it, is for very occasional use only. It’s very narrow and the passengers will find themselves in a territorial dispute with the driver's arm on a constant basis. An advantage of this seat is its ability to be folded down to provide a work surface which can be angled toward the driver or passenger. There’s plenty of storage, depending on the trim level selected. 5.9 litres of capacity is yours for the taking in the door pockets alone, and there are open and closed areas on the dash, and a handy overhead shelf.

Proace City Electric doesn’t come with the digital instrument cluster that its Stellantis siblings have - a good example of how these vans, while looking the same at first glance, do have subtle differences and potential customers shouldn’t assume anything.

What Trim Levels Are Available On The Toyota Proace City? 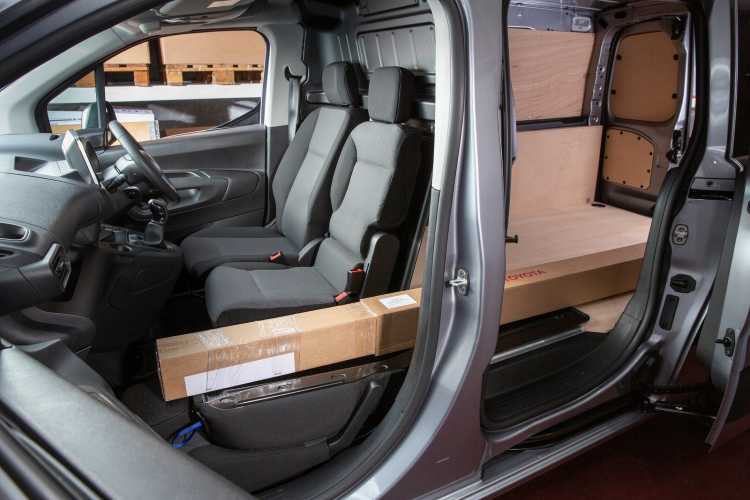 When it comes to trim levels, the Toyota Proace City offers 3 - although Proace Electric is only offered at the middle-trim ‘Icon’ level.

What Are The Toyota Proace City’s Diesel MPG & Emission Ratings?

The company claims 50.4mpg under WLTP test conditions for both Toyota Proace City models with diesel engines and manual gearbox, and Co2 emissions range from 145 to 157g/km depending on the model chosen. The electric version produces no emissions and offers a maximum range of over 160 miles (WLTP).

The company has one of the best warranty offerings on its commercial vehicle range, which includes the Toyota Proace City. Although the standard 3 years/60,000 miles is nothing special, if you always have your van serviced at a Toyota dealer the warranty will continue for up to 10 years or 100,000 miles, whichever comes first! The battery packs on the electric van have an 8 year/100,000 guarantee as standard, which is a huge vote of confidence.

Although service intervals are variable depending on your operation, you’re looking at around 2 years/25,000 miles between scheduled dealer visits (these are fixed on the Proace City Electric).

Taken on its own terms, the Toyota Proace City and its electric offspring is a solid offering in the small van sector. You’d be hard pushed to choose between it and the other Stellantis vans it shares its platform with, and ultimately it will come down to how you feel about its looks (which are radically different) and the van itself (which, apart from the instrumentation panel in the electric version, are not different).

Personally, I like that Toyota has made an effort to differentiate the look and feel of the van from the other platform sharers. I also like how important Toyota makes its drivers in the warranty and aftercare process. The company knows that the vehicle has to win over potential drivers on more than just the van, so they do it by providing peace of mind. THAT is why I’d always put a Toyota LCV - not just the Proace City - at the top of any recommendations list.

If you enjoyed this article, take a look at my review of the latest Toyota Hilux pickup truck or check out our best van leasing deals.