If you drive or operate a van in central London, you’ll know about the ULEZ (Ultra Low Emission Zone). If you’re not, you’ve either been living under a rock or paying fines without knowing it - or you’re already operating a compliant van.

In this article, we take a look at the implications of ULEZ and how it's possible to avoid the charge altogether. But first, here’s a 60-second ‘top level’ blitz through the main facts:

When Did ULEZ Start?

On April 8th, 2019, the 'Ultra Low Emission Zone'  was introduced in Central London.

What Does ULEZ Mean For Van Drivers?

It means that if your diesel van doesn't comply with Euro 6 emission regulations, you will have to pay a daily charge to enter the zone. The charges apply 24 hours a day, 7 days a week except Christmas day..

Where Is The London ULEZ?

The area of central London currently falling into the congestion charge scheme (still payable, separately) forms the ULEZ. Critically for many van operators, from 25th October 2021 the ULEZ will extend to a much wider area surrounded by the North and South Circular roads.

14th March 2022 Update - Mayor of London Sadiq Khan has confirmed that the London ULEZ will cover the whole of Greater London by the end of 2023 - although the consultation mention below in the 18th January 2022 update still stands as the final decider. If this plan goes ahead, it effectively means that only the 'cleanest emission' vehicles will be able to travel inside the M25 without having to pay £12.50 per day.

When you consider that the first ULEZ expansion is thought to have taken over 47,000 of the most polluting vehicles off London roads, it's probably prudent to assume its success will prompt further expansions.

We'll keep you updated on any future decisions right here.

18th January 2022 Update - The expansion of the London ULEZ to include Greater London (and the inevitably higher charges for all vehicles - except the cleanest ones) are being considered. This has come about due to the possible application of a road pricing scheme in the capital city to improve air quality, cut congestion and look into whether or not road charging tech works.

These considerations were confirmed on the same day a new report commissioned by the Mayor of London sets out what needs to happen to achieve net-zero carbon emissions by 2030 in London. The report stated that to achieve the net-zero goals, a new type of road user charging system - one that removes congestion charges and ULEZs - is needed. At present, that looks like a pay-per-mile charging system that will depend on how polluting a vehicle is as it drives, how congested a road is and whether or not a specific area has good public transport.

Potential approaches also include a simple extension of the London ULEZ north and south, extending the entire zone to include all of Greater London and adding a small charge for all vehicles except the cleanest, introducing a flat clean air charge for all vehicles except the cleanest, and a Greater London boundary change and charging all vehicles not registered in London a fee as they travel into the city. As it stands, this is all under consideration with TfL confirming that they will launch consultation with the public, local authorities and businesses in due course.

How Do I Know If My Diesel Van Is Euro 6 Compliant?

If it's older than around 6 years old, it almost certainly isn't. Although available prior to this date, vans registered after September 2016 had to be Euro 6 compliant.

You can check yours here: https://tfl.gov.uk/modes/driving/check-your-vehicle/

Want to be sure of ULEZ compliant vans? Take a look at our latest lease deals on brand new vans.

How Much Will It Cost To Enter The ULEZ In A Non-Compliant Van?

The daily charge is £12.50 for vans which have a GVM (Gross Vehicle Mass) of 3500kgs or under. Be aware that if you drive a ‘Transit-sized’ van that is plated at a greater GVM, you’ll fall into the truck category and have to pay £100. At the lower rate, if you need to drive in the zone every working day that's around £275 per month.

What If I Forget To Pay The ULEZ Charge?

You can pay in advance, or up to 3 days after your journey. After that, you’re liable to receive a PCN (Penalty Charge Notice) for £160. If your van is in the higher weight bracket, it’s a whopping £1000 per day.

Why Was The ULEZ Created?

It's no secret that the air quality in our cities could be a lot better. Polluted air has an impact on our health, and the Government has committed to tackle the sources of pollution as part of the Air Quality Plan.

Cars, vans, coaches and trucks are considered to be serial offenders, and in an effort to get to grips with these 'dirtier' vehicles, the Department for Transport (DfT) has supported the introduction of Clean Air Zones in inner city areas. They define these areas 'where targeted action is taken to improve air quality' with a view to 'shape the urban environment in a way that delivers improved health benefits and supports economic growth' (in other words, getting rid of the most polluting vehicles, but somehow at the same time stimulating trade).

Local authorities are given responsibility for implementing these zones, and, importantly to us as vehicle users, the option to charge for zone entry and / or the banning of 'dirtier' vehicles altogether. Some pretty brutal penalty charges can be given to drivers who aren't aware of the restrictions, or who decide to ignore them. 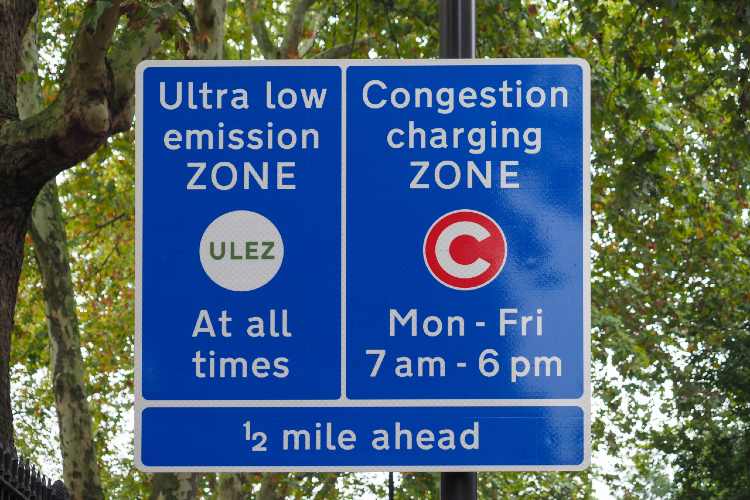 When Did The London ULEZ Come Into Effect?

On 8th April 2019, the ULEZ was introduced in Central London. Diesel powered vans up to 3500kg GVM, which do not conform to Euro 6 emission regulations now had to pay a daily charge (in addition to the Congestion Charge, which isn't going away and applies in the same area).

Keepers of a non Euro 6 diesel compliant vehicle (or Euro 4 petrol) which enters the area  and who haven't paid the charge will receive an unwelcome and nasty surprise in the post in the form of a fine which is applied daily. 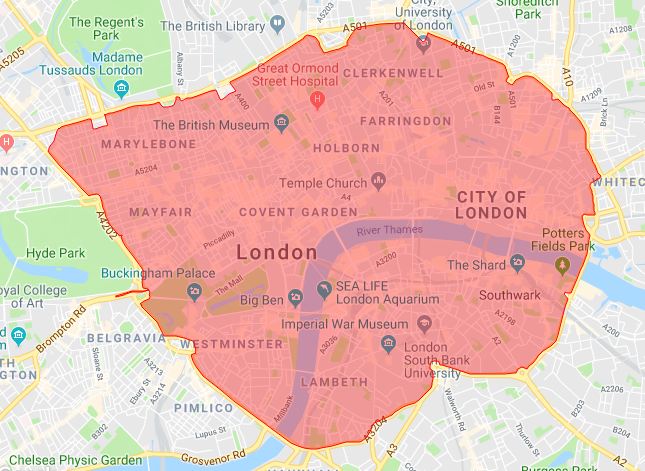 How Many Vans Are ULEZ Compliant?

All new diesel vans registered since September 2016 should comply with Euro 6 regulations. As there are an estimated 4.3 million vans on the road and even in the turbulent year of 2020, 292,000 new ones were registered, it will be some time before most of them are 'ULEZ compliant'. Indeed, nearly 1 in 3 vans are more than 10 years old.

Is ULEZ A Cash Cow For The Government?

That’s subjective, but there is no doubt that the scheme will improve air quality and the health of those living and working in the capital. Although up-to-date statistics are not available, data from Transport for London (TfL) revealed £48.9m was generated in ULEZ charges over the first 8 months of the scheme. A further £21.5m has since been paid by drivers through penalty charge notices after failing to pay the daily fee..

What Is The Cost To A Typical Business?

All businesses are different. The number of vans operated, how old the vehicles are and how often they venture into the capital will vary massively. A study by Manheim Auctions gave a couple of really good examples.

A business where just 1 Euro 5 van ventured into the ULEZ twice a week would pay £1300 per year in charges, whereas an operator with 5 non-compliant vans which were all driven in the zone every working day would end up paying fees totalling more than £15,000. There's always a risk of forgetting to pay the charge in advance too, incurring that colossal £160 fine per van, per day.

What Will Happen To The London ULEZ Over The Coming Years?

The boundary of the London ULEZ will extend all the way to the North and South Circular roads from October 2021, making ULEZ an issue for tens of thousands more van drivers and operators. 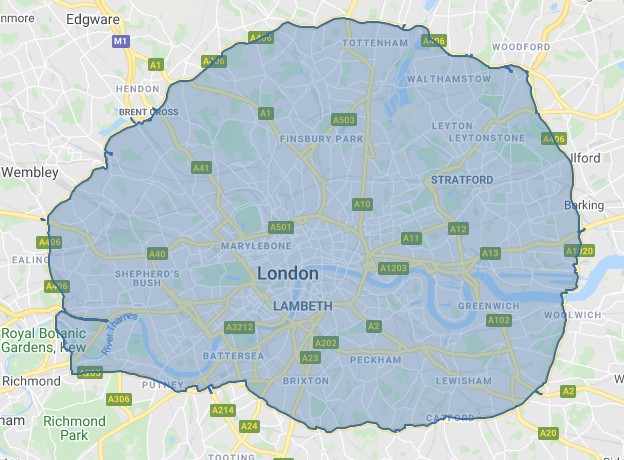 The extent of the London ULEZ after its October 2021 extension

Outside of London, many local authorities have given notice that they are in various stages of planning to introduce their own clean air zones. Although in some cases not as strict as London’s ULEZ (for example only charging lorries and taxis) there is little doubt that things are going to get tougher in the years ahead for those who don’t operate a low or zero emission van.

The dates for introduction have been moving in some cases due to the pandemic, in fact Leeds has scrapped plans for a clean air zone, citing improvements in air quality (after spending a reported £11.5 million in preparing for it).

At the time of writing the following authorities commencement dates for clean air zones are as detailed below:

We’re not going to look at every city in detail, there’s a possibility things may change prior to implementation, but the rules for the new Birmingham clean air zone are broadly similar to the London ULEZ, with Euro 6 diesel and Euro 4 petrol compliant cars and vans being permitted free of charge. An £8 per day charge is made for older vehicles and the fee for trucks is £50 per day. The image below shows the extent of the zone. 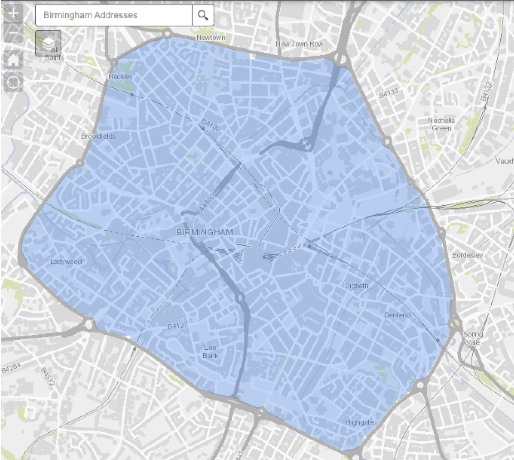 How Can I Future Proof Myself Against ULEZ Charges?

For the van operator who has an older van and works in Britain’s cities there is no way of avoiding the daily charges. Realistically, he or she is putting off the inevitable and can make paying the daily charge history by changing their van for a new Euro 6 model.

In the first example, the van owner incurring a £1300 charge for his twice weekly trips into the city is spending £108 per month. That's almost enough to pay for a lease on a brand new Vauxhall Combo, or more than half the payment for a Transit Custom or a huge Vauxhall Movano. Not only will they enjoy a 'charge free' journey into the zone, they'll also reap the benefits of a vehicle which, in most circumstances is quieter and more economical than its predecessor. Not to mention 3 years of not having to worry about MOTs and the peace of mind that a full manufacturer's warranty offers.

The availability of 100% electric vans has also increased massively in the last couple of years and for urban operation (still with ranges of over 200 mIles between charges in some cases) they are becoming a very realistic proposition. With the government pursuing the ‘Road to Zero’ (emissions), there is no doubt that before too long, a fully electric van will be required when operating in some areas. Indeed, the government has already issued guidance to London boroughs who may wish to introduce a ‘ZEZ’ (Zero Emission Zone) - more on those as they become a reality.