Which Tradespeople Were The Busiest In 2020?

Vanarama surveyed 1,000 Brits and teamed up with the good folks at Rated People to find out what 2020 looked like for tradespeople. Who were the busiest, why were they needed and did the lockdown affect consumer attitudes?

"Thousands of people have turned to professional tradespeople this year to help them turn their visions into reality. At Rated People, we've seen a natural increase of 7% more jobs being posted for tradespeople compared to last year, so there has definitely been a rise in demand for their services, despite what you might expect with a pandemic."

64% Called Out Tradespeople In 2020, With Plumbers & Electricians Most In-Demand

Almost 2/3 of respondents (64%) said that they'd called out for a tradesperson during 2020, with 52% saying that more time around the house during lockdown had made them more aware of issues that needed fixing.

Our survey also investigated which trade was most in-demand and it turns out that Brits needed the most help with their plumbing and electrics, likely due to these both being used much more than usual due to the rise in home working. 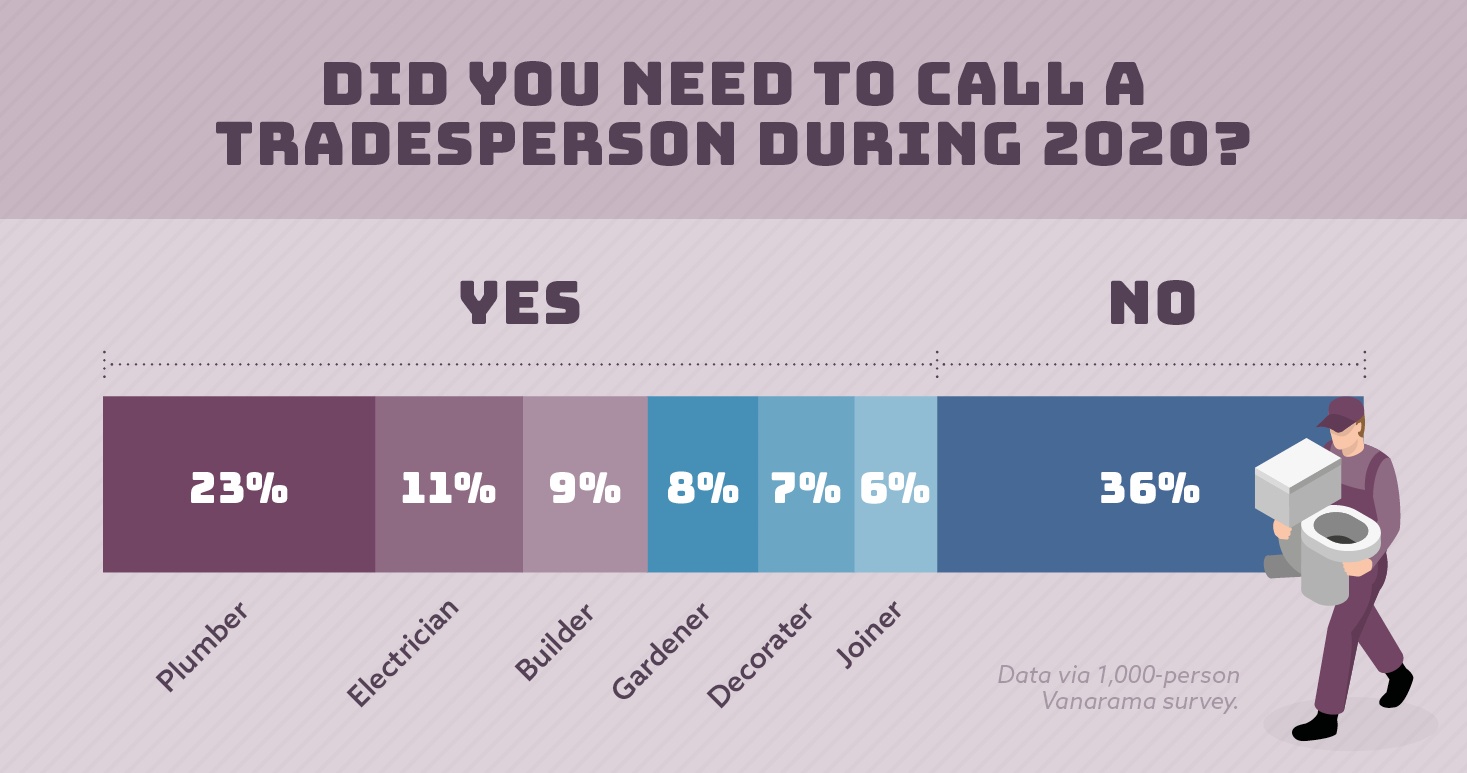 This demand led to some noticeable wait times, with 29% claiming that they'd had to hold on for longer than usual to book in a tradesperson's time.

Our survey results lined up with what Rated People saw occur in terms of demand, Minster explained:

"Overall, we've seen most demand for plumbers. We put that down to them being available for home emergencies and necessary fixes that won't wait."

She went on to provide some additional details on specifics of what jumped YoY from December 2019 to December 2020:

DIY SOS: 20% Admitted Causing An Issue That Required Calling A Tradesperson To Fix

Our survey confirmed that we're a nation of DIY enthusiasts with 58% of us keen to give home improvements a go before calling a pro. While this may save a few quid on smaller jobs, there are inevitable risks – especially for more tricky fixes.

In fact, it can quickly lead to issues, with 20% admitting to a DIY faux pas that required the help of a tradesperson. While this won't be bad news for the business that gets your SOS call, it might be worth considering taking a step back and whether it would have been more cost-effective to just get a professional involved from the get-go. 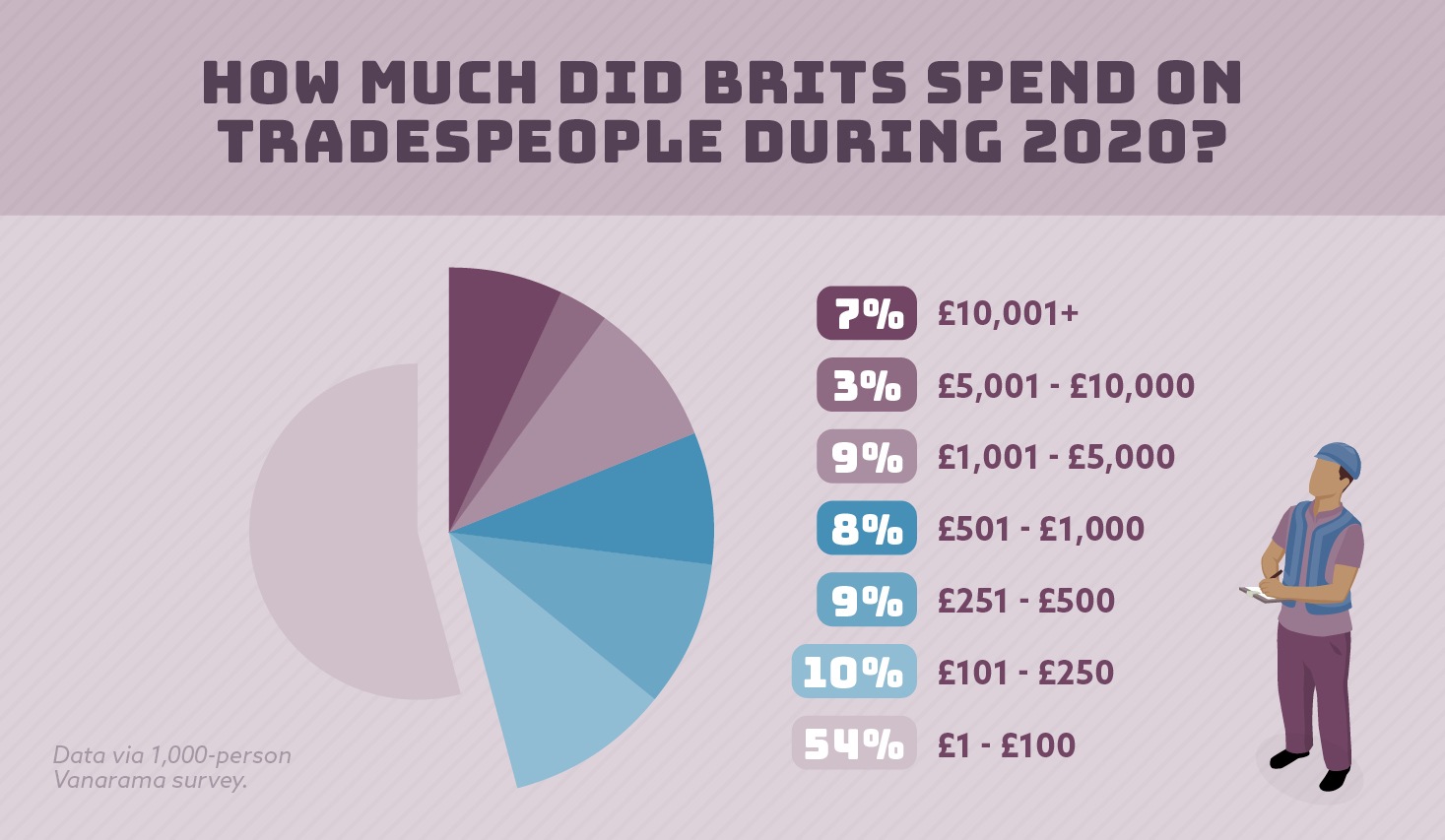 However, most people spent £100 or less showing that it's odd-jobs and quick fixes that have been keeping tradespeople busy during a tougher year as opposed to large-scale work.

Price isn't everything according to our survey, however, as only 12% of respondents would choose a tradesperson based on the amount they charge - while 70% are more likely to rely on positive word of mouth.

With restrictions keeping us apart from friends and loved ones and the risks of close contact being emphasised daily, you would think there'd be a bit of hesitation in getting someone in to do some work on your home.

It's positive to see then, that **over 2/3 **of respondents (68%)said that they were comfortable with tradespeople in their home during lockdown – trusting their professionalism and responsibility around guidelines.

More so than just being happy to accept their help during months of tough restrictions and social distancing, we asked Minster whether appreciation for tradespeople has risen during these difficult times.

"Yes, we'd like to think so. Trades businesses have offered homeowners support and assistance to make their homes comfortable and safe during an uncertain time and we've had a lot of happy homeowners leaving great reviews for tradespeople on our site in 2020, showing their appreciation. Tradespeople have helped with everything from fixing broken boilers for nurses, to helping parents create kitchens that are ideal for family mealtimes."

While the majority are comfortable having people in to do work, our survey revealed that a shocking 20% are still uneasy with letting a tradesperson use their toilet. We'll let that slide if it's due to restrictions but if not (that wasn't referenced in the question) – shame on you lot!

Kitchens & Bathrooms Were The Main Rooms In Need of Work, But Gardens Needed The Most TLC

Getting a lot more use from people as we all stayed home due to restrictions for large parts of the year – kitchens and bathrooms both topped the list of rooms that needed work in 2020.

Whether that's giving the rooms a total refresh after realising they were a bit tired (looking at the respondents who spent over £10k) or just keeping on top of issues Brits spotted with being around these spaces more. 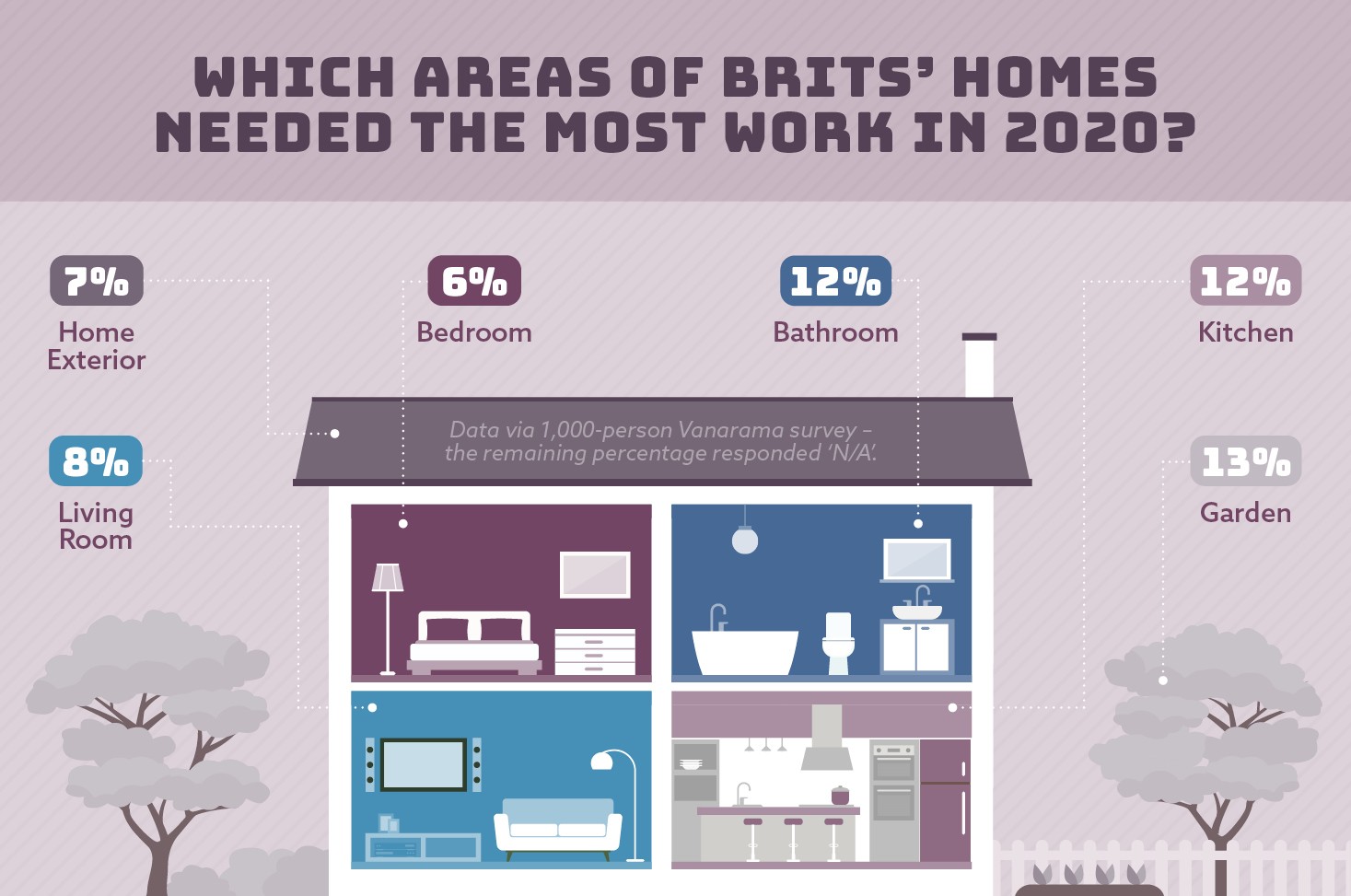 The area that our survey identified as 'needing the most work', however, was the garden. With many people using their private outside space to make sure they kept up a healthy dose of Vitamin D – it seems that they also noticed that things could do with sprucing up.

This was also a trend identified by Rated People – who had this to add:

"Outdoor trades like gardening were protected from any dips in confidence about welcoming tradespeople into homes, and at times where we've not been able to socialise as we normally would, our gardens have offered us an escape from feeling like we're stuck inside."

"The weather has played its part too! We had a really warm summer and thousands of people couldn't travel abroad like they normally would. Instead, they invested into improving their own outside spaces, so they could sit out and make the most of the sunshine. From when the first lockdown was announced up until the end of September, homeowners in the UK posted over 45,000 gardening jobs on our platform to find professional gardeners."

Asking The Experts - How Has 2020 Affected Tradespeople?

With our study finding that this year has had more of a positive outlook for trades than other sectors of the UK economy, here are Rated People's thoughts on how 2020 has played out for tradespeople:

"Trades companies make up nearly 20% of the UK's businesses and it's been fantastic to see them recognised by the UK Government as playing a vital role in keeping the economy moving and driving its recovery. Tradespeople have been largely able to continue working as normal in and around homes and they'll be key to the success of the Government's new Green Homes Grant scheme, aiming to fund green improvements for over 600,000 homes."

Praising the way tradespeople have reacted to the changeable restrictions, Minster added:

"With the ever-evolving response to COVID-19, trades businesses have been quick to adapt and do what they can to continue working and helping people with their home improvements in the safest possible way for themselves and their customers. Their resilience throughout an uncertain period and their dedication to helping customers with the jobs they need doing has been great to witness."

"The trade industry has fortunately been able to keep operating in line with new health and safety requirements to be on hand to help people get more enjoyment from their homes and save the day in any home emergencies!"

For more trades-related topics as well as a range of other automotive articles head over to our Van News page. While you're here, why not browse our most recent van leasing deals to learn more about what we offer.