Why Lease the Jaguar F-Type Convertible? 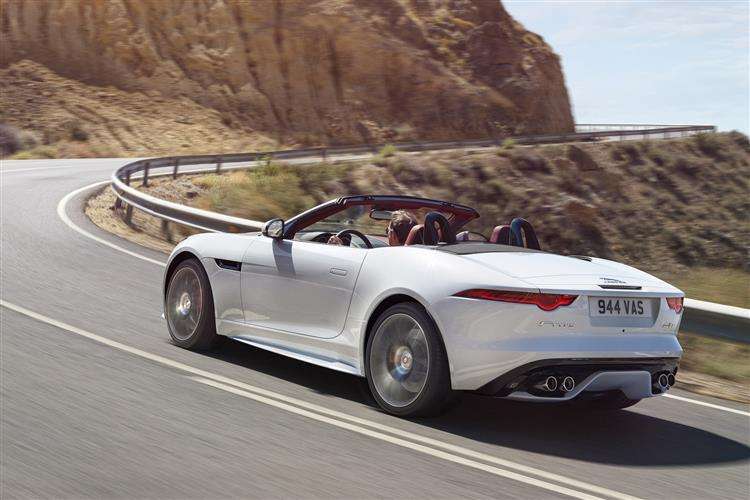 The F-TYPE convertible exorcises the demons of the past in a quite emphatic manner. This latest car offers three engine choices, 340PS and 380PS supercharged 3.0-litre V6s and the ballistic 550PS supercharged 5.0-litre V8. Now offered with all-wheel drive options and manual gearboxes, Jaguar's baby soft top just goes from strength to strength.

Okay, time for a quick report card on the Jaguar F-TYPE. It's been nothing but good news for Jaguar, shifting over 1,000 units per month in 2013 and the addition of the F-TYPE Coupe has only broadened its appeal. Thing is, Jaguar isn't sitting back, sparking up a Cuban and watching the money roll in. Instead it's ploughing huge investment into the car and the fruits of that research and development are starting to materialise. We've heard rumour of an even more hardcore GT3-style version and also a four-cylinder model that would make the entry price a bit more manageable, but coming back to the here and now, we get some very interesting F-TYPE developments indeed. In short, you can now specify the F-TYPE Convertible with all-wheel drive and you can also get a manual gearbox. The model permutations take a little figuring out but more choice is better, right?

As before, there are still three different engines that power the F-TYPE; two V6s and a V8, all petrol-powered. First up is the standard F-TYPE with a 340PS supercharged V6. The F-TYPE S gets a 380PS version of this engine, while the F-TYPE R gets the frankly majestic 5.0-litre supercharged V8 that makes a potent 550PS. Previously, all models saw drive go to the rear wheels via an excellent ZF eight-speed automatic transmission, but now there are other options to consider. The S and the R get an all-wheel drive version sold alongside the rear-wheel drive model. The F-TYPE and the F-TYPE S also get a manual transmission option, but the kicker is that you can't have all-wheel drive and manual on the S, or anywhere else in the range if you've been paying attention. The all-wheel drive transmission makes the F-TYPE R marginally quicker off the line, Jaguar quoting a sprint to 62mph of 4.1 seconds - compared to 4.2 seconds for the rear-wheel drive car. Somewhat curiously, the rear-wheel drive S records 4.9 seconds to 62, with the all-wheel drive car stopping the clock at 5.1 seconds. Go for a rear-wheel drive manual and that hits 62mph in 5.5 seconds. As before, the S gets a mechanical limited-slip differential on the V6 S, while the V8 gets an electronic item. You get an all-aluminium chassis, an electrically operated fabric roof, retuned double wishbone front suspension and a multi-link-suspended rear. Electrically power-assisted steering also debuts.

The all-wheel drive cars look subtly different to the more traditional rear-drivers but you need to know what you're looking for. It's cheating to just look at the badges - or indeed the AWD model's different wheels. Instead look for a bonnet with a deeper central power bulge, plus air vents on the flanks that are positioned further apart and further forward than those of rear-wheel drive F-TYPEs. I mentioned wheels: the all-wheel drive S gets 19-inch diamond-turned 'Volution' alloys, while the all-wheel drive R is fitted with 20-inch diamond-turned Gyrodyne alloy wheels. In truth, nothing really needed doing to the styling. The F-TYPE just works really well in that regard, especially as the car has become a bit more of a familiar shape on our roads. There are some lovely details such as the pop-out door handles and the single flying buttress that swoops down from one side of the centre console. Then there's the neatly styled gear selector, the giant TFT display in the dash and the deep-set driving position. There's a lot to take in and some of the look and feel isn't traditionally Jaguar, though it does seem to be a logical stylistic extension from the work that's been done on brand models of recent times, especially the XK and the XF lines. The roof lowers in just 12 seconds at speeds up to 30mph.

The introduction of the manual version has the handy effect of lowering the price of the F-TYPE at the entry-level, shaving £1,800 off the price of the automatic car and starting at around £57,000. The S starts at around £66,000 for the manual model, while the all-wheel drive auto adds nearly five grand to the price of the rear-wheel drive car, the former being pitched at just over £72,000. Finally there's the F-TYPE R, which costs just over £92,000 for a rear-wheel driver and just over £97,000 if you want power going to each corner. Which is not that bad when you consider that an all-wheel drive Porsche 911 Turbo cabriolet develops 30PS less and retails at nigh-on £130,000. The 911 Turbo S pips the Jaguar by 10PS, but you need to pay an extra £60,000 for one. Now you can see why the F-TYPE has been scoring so many conquest sales. All F-TYPE models get a stop/start system, HID Xenon headlights, an 8-inch TFT screen with navigation, a 180W sound system with USB, auxiliary and iPod connections, a rear parking aid, climate control, six-way electrically adjustable sports seats, Bluetooth, a DAB radio and Jaguar's clever Pedestrian Contact System. The entry-level F-TYPE also gets sports suspension, 18-inch alloy wheels and sports seats with leather and suede-cloth. The V6 S features adaptive dynamic suspension, an active sports exhaust, 19-inch alloys, a limited-slip differential, a higher specification braking system and some rather pretty ambient interior lighting. The F-TYPE now comes as standard with InControl Remote telematics functions. When away from the vehicle, this system makes it possible to check information such as the fuel level or the door lock status using a smartphone. You can even use the 'phone to start the engine, enabling the climate control system to bring the cabin to the desired temperature before the journey even begins.

Jaguar hasn't always been right on the pace of its key German rivals when it comes to economy and emissions, though little consideration is usually given to the fact that its cars are usually priced more affordably and are better equipped. At the base of the range, the automatic F-TYPE records 33.6mpg and emits 199g/km of carbon dioxide. Go for a manual model and those figures are significantly worse, at 28.8mpg and 234g/km respectively. Just to put those numbers into some sort of frame of reference, a 350PS Porsche 911 Carrera Convertible with a manual 'box records 30.7mpg and emits 217g/km, somewhere between the two different Jaguar transmission choices. Jaguar must be absolutely delighted with the way that F-TYPE residual values have held up, an entry-level automatic convertible retaining a bigger share of its value after three years than either a Porsche Boxster S or a Porsche 911 Carrera Cabriolet when both are fitted with an equivalent PDK transmission.

Jaguar is a company that has, in the past, demonstrated an uncanny ability to snatch defeat from the jaws of victory. When we first drove the F-TYPE, we wondered how they'd manage to shoot themselves in the foot with base material that good. But they didn't. The pricing was well-judged, the promotion spot-on and the car has, fingers crossed, appeared well screwed together. It's a case study in doing things right and the latest models only serve to underscore that fact. The all-wheel drive chassis is a logical choice for the more powerful F-TYPE models which could be a bit hairy-chested for some. In this damp and dismal isle, a little more of a traction advantage is never a bad thing. The manual gearbox addition was something none of us saw coming. I'm not sure the F-TYPE really needed it, as it already sports just about the best transmission in the business, but there are some die-hards that miss a clutch pedal and a stick. Good luck to 'em. They're really going to enjoy pedalling the F-TYPE about. The changes to the suspension and steering are interesting but just point to a car that's being relentlessly polished and improved. I'll tempt fate. I don't care. The F-TYPE just can't fail.