Why Lease the Kia Ceed Hatchback? 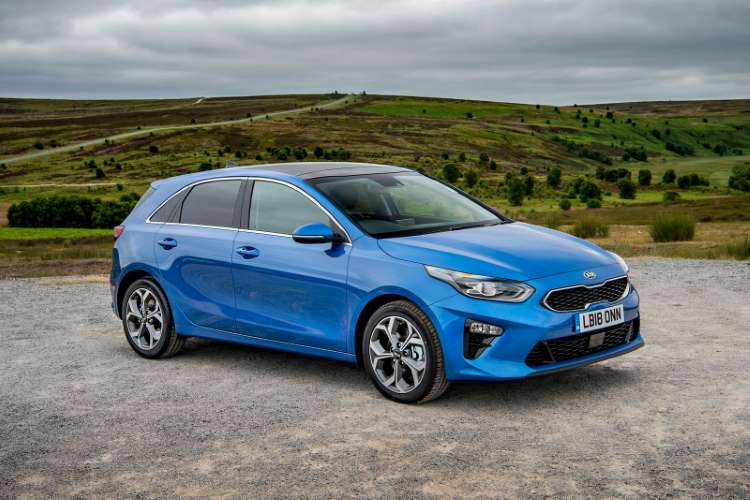 Kia has taken a further step forward in the family hatchback sector with the second generation cee'd. Jonathan Crouch checks it out.

In second generation form, Kia's cee'd no longer only looks to undercut Focus-class family hatchbacks: it wants to tackle them on equal terms at equal prices. Which means it will have to be very good indeed. With sharper looks, great quality and higher technology, the signs are promising.

The rise and rise of the Korean motor industry has been one of the enduring industrial stories of the last decade, right up there with Google, Apple and Facebook and every bit as impressive. From an embarrassing budget brand base, marques like Kia are now embarrassing mainstream makers with style and high technology at sensible prices. It was an evolution that took less than ten years and one that all began with one car - the cee'd family hatchback, launched in 2007, but now well established in the much smarter and more sophisticated second generation guise we're going to look at here. Launching this car was always going to be a difficult step to take. After all, converting customers into a new brand is always possible if the product is right and its prices low. But selling this cee'd for the same kind of money people would pay for a Focus or a Golf? That might be a step too far, even for a brand as ambitious as this one. To pull it off, this second generation model, launched in the Spring of 2012, would need to be nothing less than a showcase for everything the Korean company knows about design, quality, engineering and technology. And then some. Is it? Let's find out.

You can't fault the way that Kia has gone about this. Clearly, someone in Seoul has looked at just what makes the best family hatchbacks great and gone to much trouble to try and emulate them. In the original version of this car, that meant the same clever multi-link rear suspension system pioneered by Ford's Focus and copied by Volkswagen's Golf, something that's still not the norm in this segment. In this second generation model, Kia has gone further. Think our steering system lacks feel? No problem: here's a Flex Steer system so you can choose your level of feedback. Believe our petrol engines to be ordinary? Here's a state-of-the-art direct injection unit. Find our automatic gearbox antiquated? Check out this hi-tech double-clutch version. And the result? Well, it still won't satisfy those for who driving dynamics are everything. The rest of us though should be quite satisfied. After all, these models are certainly as rapid as most owners will need them to be, this diesel 1.6 making sixty from rest in 11.5s on the way to 122mph, a second and a half and 16mph quicker than its 1.4-litre CRDi counterpart. There's a bigger difference between the two petrol variants though, the up-to-the-minute direct injection 133bhp GDI petrol unit in the cee'd 1.6 making sixty in 9.8s, over two and a half seconds quicker than the petrol 1.4, on the way to 118mph. The 1.6-litre GDI was the model Kia chose to use to launch the company's first dual-clutch automatic gearbox, this 6-speed DCT unit one of those clever transmissions able to seamlessly select the next gear before you've even left the last one. At the top of the range, there's a potent 210bhp 1.6-litre petrol turbocharged cee'd GT hot hatch model.

This second generation cee'd certainly looks more purposeful, but a more dynamic shape is usually a less practical one if, as in this case, it's based on essentially the same platform with the same wheelbase as the previous generation design. So how can Kia claim this car to now be the most practical option in the family hatchback segment? I always think the acid test here is found on the back seat. That lower roof height has been more than compensated for with a lower ride height, so even tall folk are better catered for, with 12mm more roof space than before. And the 50mm of extra body length has translated into 21mm of extra pace for their legs too, so a six foot tall passenger can sit behind someone in front of them of a similar size. The extra body length also provides for a boot that's 40-litres bigger than the MK1 cee'd, offering a 380-litre capacity that's 20% bigger than that of a Ford Focus and 10% bigger than that of a Volkswagen Golf. That advantage is maintained when you push forward the split-folding rear bench to free up a useful 1,318-litres of total fresh air. And at the wheel? Well, the fascia layout is neat, though there are rather a lot of buttons, more than I've seen on any steering wheel since a drove a Ferrari 458 Italia. What's important though is that this is a classy place to be, with improvements in quality that are actual as well as perceived.

This cee'd might not be quite the bargain it once was, prices having risen by around 30% over those charged back in 2007. Having said that, it still represents an awful lot of quality for your money. Asking prices sit in the usual £15,000 to £25,000 bracket common to mainstream family hatchbacks these days, but within this, Kia still reckons to undercut obvious rivals by around 15%, a claim largely borne out by list price study. Whichever 1.4 or 1.6-litre cee'd you choose - five-door Hatch or estate, petrol or diesel - you should find it to be decently equipped, despite the tight pricing. Even the entry level model gets air conditioning with a cooled glovebox to keep your drinks chilled, a decent quality CD stereo with steering wheel controls, plus USB and iPod connectivity, electrically adjustable heated door mirrors, a height-adjustable driver's seat, front electric windows, daytime running lights and Hill Start Assist control to stop you from drifting backwards on uphill junctions. Plus all the usual safety stuff. Naturally Kia will sell you ritzier versions, like the car I'm driving here that also features alloy wheels, cruise control, parking sensors and the Flex Steer system that'll adjust steering weight to suit the conditions you're in. But of course, the really high-tech stuff sits further up the range and on the options list where you'll find everything rival brands offer and more with features like a huge panoramic glass roof, a 10-way power-adjustable driver's seat with memory, a Parallel Parking Assist System that'll automatically steer you into tight spaces and a Xenon adaptive front lighting system with automatic levelling.

You might never have expected to be handing over £15,000 to £20,000 or more for a Korean family hatchback like this one - but then, you might never have expected to be able to own a five-seater family hatch of this kind capable of over 120mph, yet also able to return nearly 80mpg and under 100g/km of CO2. Times move on and we need to adjust our perspectives to suit. Those sorts of figures are the ones you'll buy into if you go for the headline model in the range, the 126PS 1.6-litre CRDi diesel. Thanks to an ISG start/stop system that cuts the engine when you don't need it, waiting at the lights or stuck in urban traffic, this variant is able to return 76.3mpg on the combined cycle and put out just 97g/km of CO2. The 1.6-litre GDI petrol model also gets ISG, using it to achieve 52.3mpg and 124g/km. Start/Stop clearly makes a huge difference. The 1.4-litre petrol and diesel variants of this cee'd, rather curiously, were launched without it and as a result, couldn't match the running cost returns of their pokier stablemates. As for the twin-clutch DCT automatic gearbox optionally offered to 1.6-litre petrol cee'd buyers, well Volkswagen has already proved that if this technology is done right, the result can actually be an improvement of fuel and CO2 figures over the equivalent manual models. That's not the case here though, where they take a dip of over 10%.

There will still be people of course, who'll blindly buy a Focus, a Golf or some other family hatchback from a conventional mainstream brand without considering its Korean alternative. But these will largely be uninformed folk yet to fully cotton on to the way that products in this segment have changed. Thanks to the success of this cee'd, there are fewer and fewer customers of this kind around. Of course, shortlist selection isn't the same as a sale. There are family hatch folk who'll want more powerful engines or more dynamic handling than this car can offer. But, I'd suggest, many more will enjoy this Kia's sharp looks, impressive quality, class-leading practicality and low running costs. True, the asking prices may be a little higher than you might expect from a South Korean brand, but don't judge hem until you've tried the product, a confident design from a very confident brand. I think you might like it.