It's the UK's bestselling van!

Wondering why the Ford Transit Custom is THE nation's favourite van? Grab your glasses (if you need them) & give this a read. Vanarama Van Expert Tom Roberts reports.

Before we introduce you to the VERY popular Ford Transit Custom, lets get you up to speed with a bit of history about this medium van…

The Ford Transit Custom might look familiar, its good looks come from its big brother – the Ford Transit. You've also probably noticed that the smaller Transit's look similar too, the Ford Transit Connect, Ford Transit Courier & Ford Fiesta van have the iconic look too. In fact, if you line the whole range of Transit's up, you'll see that their features just get bigger depending on the size of the van.

Wondering how long this van has been a popular pick for the tradesman? It landed back in 2012 & has been a firm favourite ever since. Not only is it THE bestselling van, it holds third place on the top 10 list for the top selling vehicles in the UK (including cars)!

If you're looking for a medium sized van, why not pick the Ford Transit Custom Limited? After all it is the nation's favourite van – okay we'll stop saying this now, I think you get the point.

Fall In Love With The Front 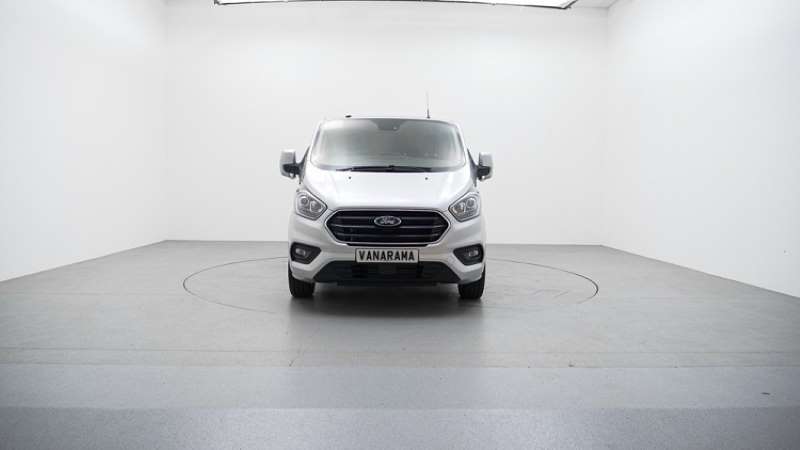 First impressions? It's instantly recognisable – it's still the Ford Transit Custom that you know & love, but depending on which trim level you opt for you might notice some refined changes.

The first revamp you'll notice on this model (Limited trim) is a chrome skirting around the grille. Instead of the bog-standard design, Ford have made the grille into a visually-pleasing centerpiece.

What about the engine? Yes, we know it's not something you can see when you first look at this Ford, but pop up the bonnet & there it is – the VERY powerful Euro6, 2.0-litre, EcoBlue Diesel engine. Anyway, enough about the engine we'll tell you more about that later.

Back to the front & say hello to the headlights! You won't just get 1 set, you'll get secondary headlights too.

Before we work our way around the rest of the exterior, let's talk about the MASSIVE windscreen. You can't miss it, it's huge! It doesn't just look impressive, it's functional too. How annoying is it when your windscreen is frosted up? Press the Quickclear windscreen button located below the infotainment screen & just above the hazard light button – the frost will be gone. If you're fogged up this button does the trick too. Maybe we should explain how the Quickclear technology works: ultra-thin filaments heat the glass defrosting & defogging your windscreen in a matter of seconds.

Now let's move onto the sides of this Ford Transit Custom… 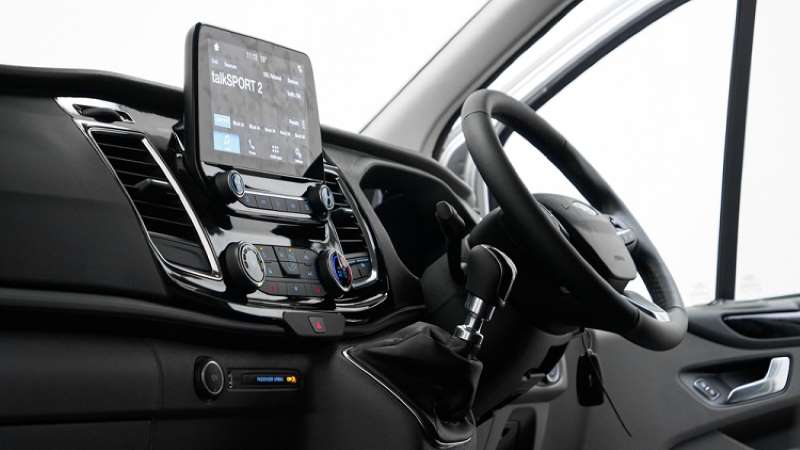 Now this is what I'm talking about. If you're looking for a van that's comfy & functional, pick the Ford Transit Custom.

What better way to prove that this van is the king of comfort other than taking a seat in the front. You'll be very impressed by the 8-way adjustable drivers' seat – perfect for long haul journeys. Your passengers will get a taste of how roomy this cabin is too. The double passenger seats have plenty of legroom & all the seats are heated! But just so you're aware, you'll only get this feature if you choose the Limited trim.

Before we move onto the star of the show, if you're after a cabin with light you're looking in the right place. You'll find the main cabin light (with built in reading lights) just above the middle passenger seat, look under the sun visors & there's light here too.

Next up is the 8-inch touchscreen infotainment system which includes DAB/FM/AM radio with SYNC 3, satellite navigation & a built-in voice control system.

You'll also get all these features thrown in for free if you treat yourself to the Limited trim: 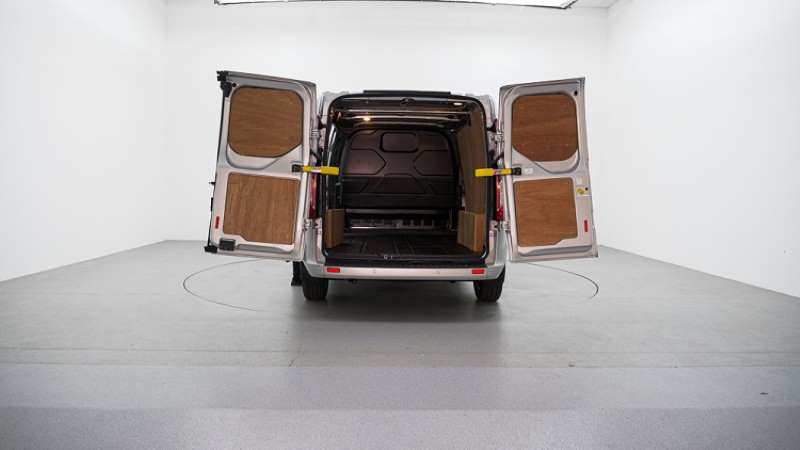 Even though this model isn't the longest or the tallest from the Ford Transit Custom range it still packs a punch when it comes to payload capacity. It can carry a weighty 850kg!

Here's what else you can expect from the L1H1 loading bay…

This van is available as a panel van or double-cab-in-van. If you opt for the panel van, you'll have the choice of these variants: L1H1 (our model), L2H1, L1H2 & L2H2. But if you fancy the double cab version, you'll have these to pick from either the L1H1 or L2H1 models.

It's Got Plenty Of Power

Now it's time for the Vanarama road test.It's no wonder this van is a bestseller, it looks great & it's a pleasure to drive.

The powerful Euro 6 2.0-litre EcoBlue engine had no problem making its way up steep hills & when I did need to shift down a gear it was seamless – there was not a suspension wobble in site. Slipping back into a higher gear was just as easy using its manual 6-speed gearbox.

So yeah, there's nothing we can fault about this van & hear us out, were not being biased, but this is one of the best van I've ever driven.

What We Think Of This Ford

If you're looking for a medium van & you're not sure where to start, the Ford Transit Custom is your best bet. It's lovely to look at, extremely smooth to drive & it's the UK's best-selling van, need I say more?

If you're looking for a medium van and you're not sure where to start, the Ford Transit Custom is your best bet. It's lovely to look at, extremely smooth to drive, oh and it's the UK's best-selling van, need we say more?
4.5
Fantastic, reliable & comfy van!
James Downie
5
Reliable and practical.
Gary Redford
5