The Mitsubishi L200 pickup truck is 40 years old, so what better way to celebrate the anniversary than with a brand new series? Say hello to Series 6 & this time Vanarama Van Expert Tom Roberts has decided to do 3 reviews in 1 - The Warrior, The Barbarian & the very top spec Barbarian X trim levels!

I've been lucky enough to drive the L200 in a variety of locations & conditions including deep mud, gravel & snow, & this vehicle handled it all without breaking a sweat. But now it's time for the real test, the Vanarama Road Test...

The Series 6 L200 feels like it's grown up a little. The Series 5 was very car-like & actually, you can see echoes of the old series towards the top of the bonnet, but as you move down the grill, it's all Series 6. It might look a little bit familiar too, that's because its chrome details look exactly like the ones you'll find on the front of the Mitsubishi Outlander.

When it comes to the Series 6, all 3 of the vehicle trim levels we reviewed - the Warrior, the Barbarian & the Barbarian X, have very similar specifications (although you get slightly more in The Barbarian X, see below). Even the loading bays are similar; they're effectively a 1.5m by 1.5m box about 0.5 metres deep. The Warrior, however, is the only one that doesn't come with a soft drop tailgate at the back, so be ready to catch that when it drops.

The engine is also very similar in the 3 vehicles, they all have the same 2.2-litre diesel engine that's euro-6 emission standard & they even have the same 21-litre AdBlue tank. 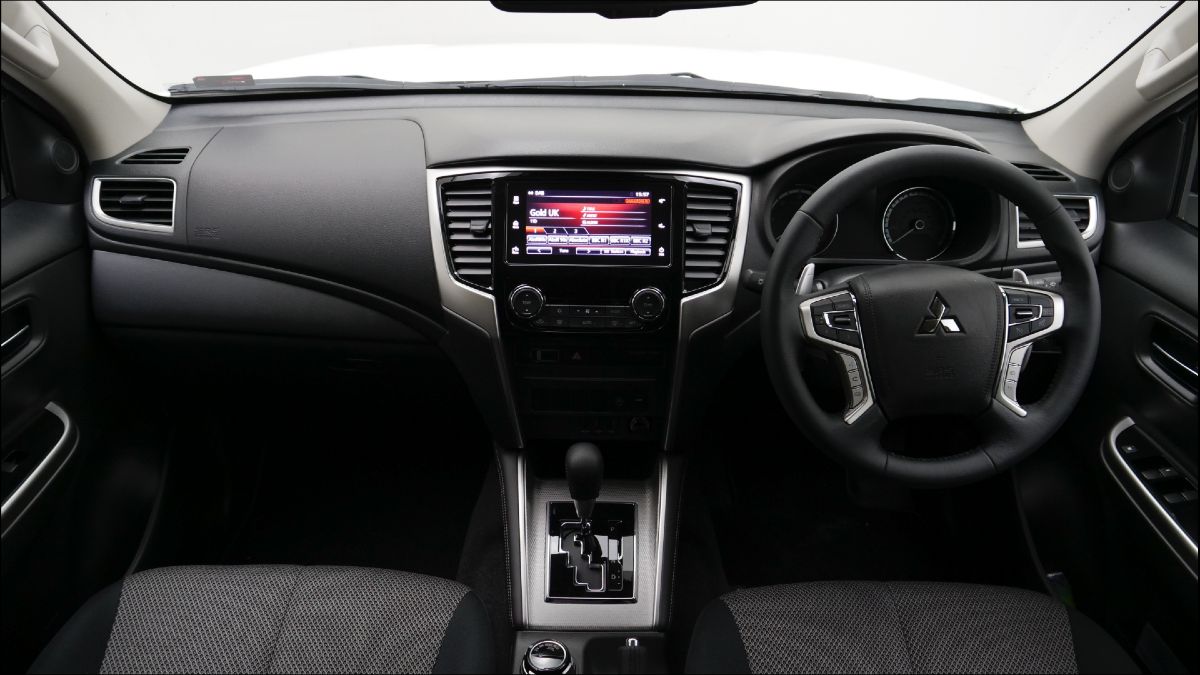 The Warrior has the standard trim level - everything you need from a modern-day pickup truck & barely anything that you don't. What do I mean by that? Well... I mean the seats may look a bit basic but they're hard wearing with this kind of honeycomb effect on the top of them which sets off the interior quite nicely. It's no nonsense! & the steering wheel looks absolutely packed with controls, you feel like there's a lot of stuff you've got control of, right from your fingertips.

You've even got paddle shifting & there's a great big, very nice, clear, full-colour driver information display right in front of you - it's perfect. The big infotainment screen is also packed with functionality & the connectivity is exactly what you'd expect - there's Android Auto & Apple Carplay & you can even hook up through Bluetooth. Plus there's everything else you'd expect to see in a vehicle of this quality - aircon, hazard lights, seat belt indicator etc. There are, however, a few blank buttons, but of course that's because there's 2 trim levels above this one! 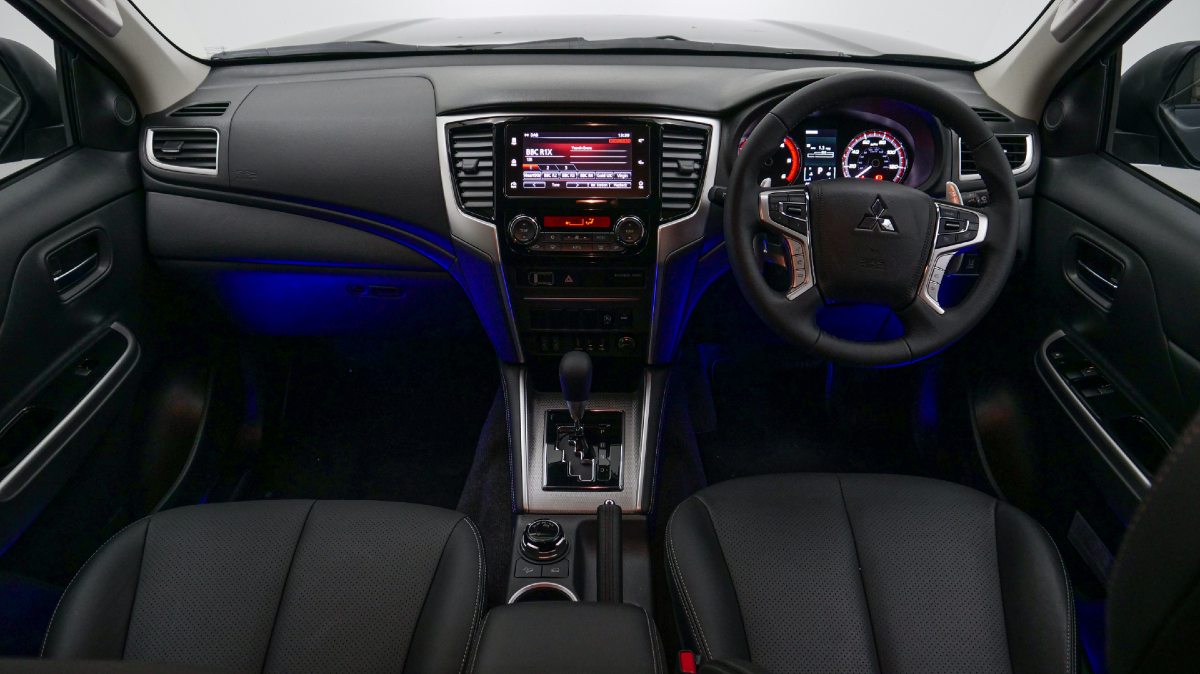 So let's move up to The Barbarian.

This one just happens to have a canopy fitted, which is something we can fit for you in our workshop, if you so desire, & has a soft drop tailgate. When I first saw pictures of the new Mitsubishi L200 I thought to myself 'ah they've made it look like The Outlander', but actually, the more I saw it, the more I fell in love with it. I thought it had a really futuristic look -  like the whole front end which has been pursed in. The L200 looks more like a pickup truck than ever before & when I compare the Series 5 to the Series 6, I know which one I want to be driving!

In The Barbarian trim level you start to get a few more toys, for example the door sills are fully illuminated & they have the word Barbarian tattooed onto them. There's a full leather interior with perforated seats, the front 2 seats are now fully heated, the driver's seat is electrically adjustable, & down by your drive selection control, you've got hill descent control & terrain selection.

For your friends & family in the back, there's also now USB sockets so they can charge their phones. There are still a few blank buttons but there's one more trim level to go. 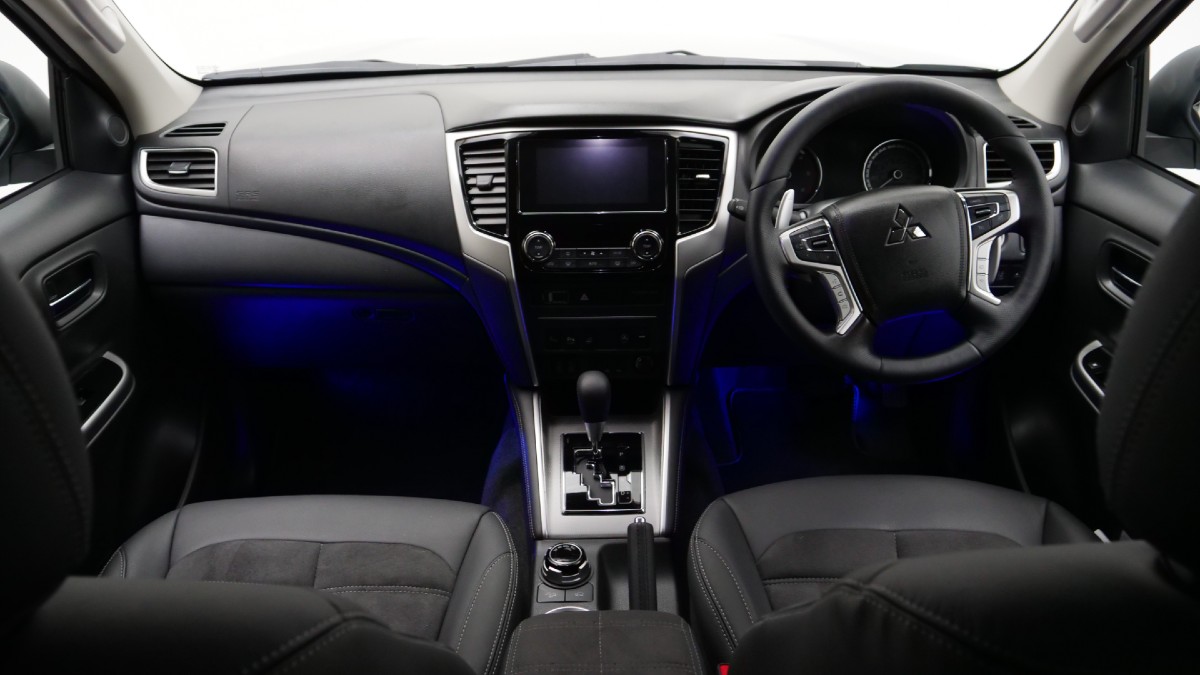 Between the 3 vehicles there's not a lot that gives away the trim level apart from on the Barbarian X. On The Barbarian X there are parking sensors either side of the registration plate & a camera. You also get LED fog lights to really give it something extra.

All 3 vehicles get the same 18-inch alloy wheels underneath, those lovely new square wheel arches, they get the same door sills, the same chrome door handles & in fact, the same chrome wing mirrors, although the ones on The Barbarian X we have just a little difference. On this one you have cameras mounted on the bottom - working together to create a 360-degree composite image that you can view inside on the infotainment screen.

At the Barbarian X trim level, you get a heated steering wheel - which is something you really miss when you don't have one. The leather seats have suede inserts which are called six pack inserts. At the Barbarian X level you also get some additional technology such as a button for blind spot monitoring & alerts that flash up on your wing mirrors whenever something enters one of your blind spots. Next to that you've got a parking sensor button, as well as a button to turn on your cameras, on the left hand side you've got your full 360 degree view & on the right hand side you've got your rear view.

When you head into the back of The Barbarian X you'll find that this is exactly the same across all 3 vehicles. The amount of head & leg room you get makes sitting in it just like sitting in the back of the luxury SUV & they all have these excellent arm rests, which have 2 cup holders. Really, it doesn't matter which vehicle you go for, when it comes to the back seat, other than the USB sockets you get in The Barbarian & Barbarian X, they are very similar.

I guess the point is that all 3 of these vehicles & all 3 of these trim levels are great. The warrior trim level has loads of toys & The Barbarian X has even more...everything you'll need for a long journey no matter what you're up to.

When I take The Barbarian X out for a test drive, I feel like I'm taking advantage of pretty much every bit of technology - parking sensors are working great & I've literally just turned the steering wheel heater on & already it's really warm. On a winter's day that would be absolutely lovely, no frostbite for me!

I've been lucky enough to drive this vehicle in all sorts of environments & I'm absolutely flabbergasted by how good it is. Not only is it a very clever pickup truck from a technological point of view, it's actually a very sound platform, capable of handling any environment, any location & almost any surface.

You also have to admire the luxurious interior. There are other pickup trucks on the market that do manage to do that as well, for example, the Ford Ranger Wildtrak is very good at making you feel like you're in the lap of luxury, the leather interior is really really nice but the engine is bigger - it's a 3.2 litre. On the Barbarian X, this 2.2 litre engine is powerful, but because it's not as big, the whole vehicle actually feels really light. There's a little bit of wobble at the top end, like you'd expect from a pickup truck because of how they sprung, but it's not a deal-breaker. When doing a hill test, the automatic gearbox picks up very nicely, it's obviously holding me in a relatively low gear but half way through I can feel power coming through. It's nice & responsive & it's very constant.

Applying a little bit of power to the accelerator actually almost seemed to flummox the automatic gearbox, just for a moment it was anticipating & trying to work out which gear would be the best, but when it finally picked it, it just sped off. It's really cool downsizing to a 2.2 engine from the 2.4 that was in the Series 5 as it doesn't seem to have made a lot of difference to the power at all. As I mentioned, there's no difference in engines between the 3 vehicles, they are all 2.2 litre diesel engines with AdBlue. The AdBlue tank is 21 litres in capacity, which pretty much ensures that this vehicle is one of the cleanest on the road!

I guess the all-important question is, has the Series 6 improved on the Series 5? Personally,  I think it has. It feels less cobbled together on the inside. I do remember the Series 5 felt like it was bits put together - even the illuminated running boards with the blue writing & the LEDs underneath them just felt a bit kind of shoved in, whereas in this one, they actually feel like more a fitted part of the vehicle.

The seats feel right, they don't look like they've been shoved in, they look like part of the vehicle & even to the left & right of the centre console there are pads to rest your leg against. So, if you are going off-road or you're bumping around, instead of in the previous versions where your leg would bump into that console the whole time & you have a big bruise down the side of you, it's nice & padded. It just feels a little more thought out. Mitsubishi is trying to bring its pickup trucks into line with its excellent SUV offering, it's using all that expertise & putting it into this!

The Series 6 is the result of 40 years of design experience being poured into a vehicle & you can tell. Everything is refined, from the drive to the engine, to the seats (even the ones with six-packs) & to the tech. Everything on the inside is easy to access, fast & responsive. You've got tons of information at your fingertips & tons of control as well.

I'm really struggling to say anything bad about the L200 vehicles, even the cupholders are good! The Barbarian X drove well through mud, on tarmac, it drove up a ski slope - it just handles everything that gets thrown at it. It doesn't worry, it doesn't break a sweat, no issues! There was a little bit of wobble at higher speeds, but I'm pretty sure a lot of that will be compensated for when you're carrying its full load.

It's a pickup & a commercial vehicle, so it can carry more than 1,000 kilograms which is excellent. If you wanted to do a bit of towing, unbraked would be 750 kilograms, or 3.5 tons of triple axle braked towing. That's a lot of weight. When we were at the test track at Silverstone we were towing another L200 with an L200 on a triple axle trailer - pretty cool!

The Series 6 of the Mitsubishi L200 is an incredibly capable pickup truck, able to do all the nitty-gritty stuff that you'd expect a modern-day pickup truck to do, while making you feel like you're sitting in a luxury SUV. Although I know the idea of a modern pickup truck is not a revelation, this one absolutely nails it!

So, the only question you really have to ask is, which L200 pick-up are you going to go for? Well, you could go for the Warrior - the no-nonsense everything you need truck. Or what about the Barbarian with a few extra bits of luxury & a few more bells & whistles? Finally, the Barbarian X, which has literally everything you could want from a modern-day pickup truck in one package.

Ultimately, the L200 you choose is going to be decided by how much money you want to spend, but actually, at the end of the day, whichever one you go for you're getting a great pickup because all Series 6 L200s get a big thumbs up from me.

Don't forget to check out our latest van leasing deals where you'll find everything from large transits to compact city vans.

The Series 6 of the Mitsubishi L200 is an incredibly capable pickup truck that blends SUV style with commercial nous!
4.5