Why Lease the Smart Fortwo Cabrio? 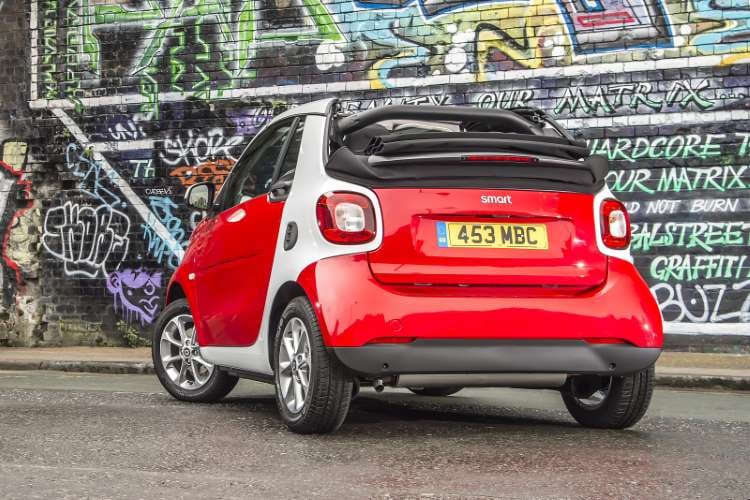 Building the car is the easy bit. In fact there's very little wrong with the smart fortwo electric drive. It's perky, gets decent range and feels perfect for the city. What's a bit tougher to crack is the business model, which is distinctly complex. What it boils down to though is that this is the most affordable all-electric car yet offered to UK customers.

If ever there was a car that was a perfect fit for electric propulsion, it's a smart fortwo. Tiny, lightweight and geared to the urban environment, it's a wonder that it's taken the company this long to finally get round to selling the public a battery-powered model but it's here. Making many of its electric rivals suddenly look distinctly half-baked, it seems a vehicle that ought to do extremely well. The problem that faces smart is one that is common to everybody who markets an electric car. Price. In this case though, this form of motoring seems more affordable than we're used to. In an age of all-electric citycars that cost over £20,000 to buy, the early signs with this one are that, with the aid of the government's Plug-in Car Grant, you might be able to buy the thing and run it for, say, three years, for around the £15,000 mark. And that's the kind of figure that would really move this market segment on.

This is not the first electric fortwo we've seen. There's been one theoretically offered as part of the range for some time now, but it's only been available to selected companies on a special lease. And it's been very restricted in terms of range, charging time and performance. This second generation model is a very different proposition in all these areas and it's to be available to all. And on the road? Well how does the thought of 0-60 in 4.8 seconds grab you? Okay, it's 60km/h but it's still respectably quick. 0-60mph takes 11.5s on the way to 78mph flat out. It's certainly brisk enough to be able to sidestep the brake pedal and catapult the little fortwo off the line. That it does so without anything in the way of engine noise is even more impressive, the merest whirr of the 54kW electric motor accompanying a scarcely perceptible whine from the one-speed transmission. It's all very serene and makes city driving rather stress free. On the highway, you can theoretically reach a 78mph maximum, but this does rather chew the battery's range which, when driven a bit more sedately, can be eked out to over 90 miles. An indicator on the dashboard lets you know how efficiently you're driving. Needless to say, you'll be tempted to gun it everywhere. It's too much fun not to. Charging from empty takes just over seven hours from an ordinary household socket - or around 6 hours if charging at a permanently installed 400 V wallbox or public charging station. It is possible to optionally equip the vehicle with a quick-charging function. The 22kW on-board charger enables a completely empty battery to be fully charged in around an hour. A separate power cable is needed to connect the vehicle to a public quick-charging station or a fast charge wallbox at home or work. With all of the batteries mounted in the sandwich floor, the fortwo electric drive has an admirably low centre of gravity and probably corners better than its petrol sibling. The battery weighs 170kg and is sourced from Deutsche ACCUmotive, while the underfloor position is both thermally stable and good for crash protection.

As with any other smart fortwo, the electric drive model feels tightly screwed together and looks good. Whether you opt for coupe or cabrio, it's still an arresting little thing. This variant is available in seven body panel colours and three tridion safety cell colours with the signature colour scheme being crystal white with an electric green tridion safety cell and door mirror cappings. Discreet 'electric drive' badging at the back and on the tridion safety cell will prepare people for your silent getaway. The 220-litre boot might be a problem if, like me, you're pathologically incapable of travelling light. The cabin offers a decent amount of room for two, the passenger seat set 15cm back to maximise the amount of shoulder room. All but the most freakishly tall should fit in with no headroom issues. The fortwo now feels like a Mercedes-Benz product rather than something hurriedly inherited.

This promises to be the most affordable all-electric car so far. And, in contrast to the first generation electric smart fortwo (which was only available on a special lease to selected companies in Britain), this one will be an established part of the UK fortwo range, available from any smart dealer. There are two main options when buying this car in either Coupe or Cabrio form. Either you buy the car with its battery outright or you opt for what smart calls 'Sale & Care' which involves you leasing the battery for £55 a month for your period of ownership. Buying outright is lightly more cost-effective as the higher asking price gets you the benefit of the full £5,000 government PiCG Plug-in car Grant that this model is entitled to. With that subtracted from the initially off-putting asking figure, you're looking at paying around £15,500 for the Coupe or around £17,000 for the Cabrio. Opt for the 'Sale & Care' approach and you're looking at around £12,500 for the Coupe and around £13,500 for the Cabrio, with the £55 per month battery leasing fee to pay on top of that, something that would cost you around £2,000 if, say, you kept the car for three years. Over a longer term than that, it'd be more cost-effective to go the standard purchase route. Were I a purchaser, I'd want to talk to my smart retailer about the cost of adding a wall charging box at home to decrease the total charging time from seven to six hours. Or if I had a work-based or publically-accessible fast-charging point in my vicinity, I might even want to consider paying just over £2,500 for the optional 22KW on-board charger that charges in an hour. All fortwo electric drive models come well equipped, with satellite navigation, air conditioning and 9-spoke 15-inch alloy wheels.

The smart fortwo electric drive makes a lot of sense. It's a charming piece of technology that works extremely well and which not only drives nicely but seems a perfect technological fit. It's far more convincing than Nissan's LEAF at doing the city car thing and makes vehicles like the Peugeot iOn and the Mitsubishi i-MiEv seem a generation or so behind. In short, it just works. But what's crucial here is the value proposition. You should be able to get yourself into one of these for around £15,000 or so based on costs over, say, three years. Assuming that you ignore impractical feebly-powered electric conveyances like Renault's Twizy, that makes this car the most affordably priced electric car on the market. Viable electric personal transport has at last arrived.