Why Lease the Audi Q3 Estate? 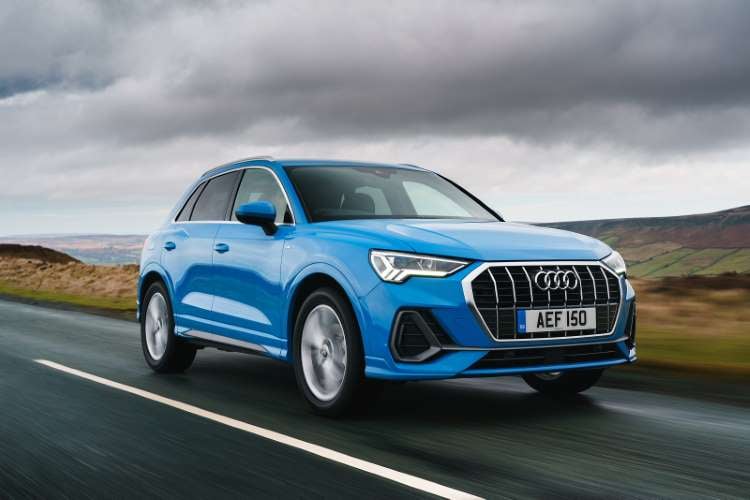 Now with revised styling, uprated safety gear, better efficiency, more equipment and a touch of additional power, the third and smallest model in Audi's SUV line up, the Q3, continues to gain converts. As before, choose petrol or diesel, manual or S-tronic, front or four-wheel drive, with a manic 340PS RS Q3 topping the range.

If there's anything we've learned in recent years, it's that underestimating Audi isn't particularly clever. Time and again, we've questioned their product philosophy and then a couple of years later we've wondered, on the back of huge sales, why we ever doubted. The Ingolstadt company recently outstripped BMW and Mercedes in UK sales for the first time and products like this updated Q3 are key to their success. Audi's smallest SUV didn't look an instant winner when it first launched in 2011. We thought it looked a bit dowdy and didn't give it a chance against the ravishing Range Rover Evoque. We were wrong. While the baby Rangie may have trounced it in terms of UK sales, across Europe the Q3 has more than held its own.

The diesel engines soak up the most Q3 customer orders but that might change with the insertion of the 1.4-litre TFSI petrol engine with Cylinder-on-Demand technology. With 150PS on tap and the option of either manual or S tronic twin-clutch automatic transmission, it gives the exclusively front-wheel-driven Q3 1.4 TFSI a 0-62mph sprint time of just 8.9 seconds. Above it in the petrol line-up is a 2.0-litre TFSI unit, with power increased from 170PS in the outgoing Q3 to 180PS. This unit can be linked to either manual or S tronic transmission and is exclusively fitted with quattro all-wheel-drive. The RS Q3 gets a 2.5-litre five-cylinder TFSI and a 30PS power upgrade to 340PS helps to lower its sprint time from 5.2 to 4.8 seconds. Diesel models comprise two four-cylinder TDIs with outputs of 150PS (up from 140PS in the equivalent previous generation Q3) and 184PS (up from 177PS). The 2.0-litre TDI SE with 150PS and manual transmission will record a 0-62mph time that's 0.3 seconds quicker than its predecessor at 9.6 seconds. You can also select the S tronic transmission for this model and choose between front or four wheel drive. The 184PS version also offers two transmission options, but is offered solely with quattro drive. The Audi drive select adaptive dynamics system which was previously offered at extra cost is now fitted as standard and enables the driver to make adjustments so that the driving dynamics suit personal preferences.

Perhaps Audi were a little stung by the fact that the Q3's styling was roundly derided as being a bit unimaginative, but while the coupe-like shape remains largely as is, the details have been freshened up. There's now a 3D effect Singleframe grille, revised bumpers and smarter alloy wheels. The full body-colour paint finish which was previously standard for S line versions and above also now extends to SE models. The revised headlights now feature xenon bulbs and LED daytime running lights as standard in SE versions and these are complemented at the rear by reworked LED tail lights. 'S line' and 'S line plus' specification levels upgrade to all-weather LED headlights and dynamic 'scrolling' rear indicators which illuminate sequentially within two-tenths of a second from the inside out in the direction the driver intends to turn. Space inside hasn't changed a great deal, with room for five occupants, 420-litres of luggage space up to the parcel shelf and a maximum of 1,325-litres with all the seats folded. The seats don't tumble flat to the floor but you do now get a retractable luggage cover and in 'S line' versions and above, there's a powered tailgate. Interior materials quality still shames every other comparable vehicle.

Prices haven't moved too far, with the more powerful entry-level car now opening at just over £25,000, but if you want four-wheel drive, a diesel engine or are tempted by Audi's rather beguiling options list, expect the asking price to climb quite markedly. Like many of its premium class rivals, the majority of Q3 models will leave Audi dealers priced considerably north of £30,000, with the cheapest all-wheel drive car leaving you £1,600 change from that sum in standard trim. The options could severely dent the bank balance. I'm wondering how I've got this far without a Bose surround sound system with 14 individual speakers, a hard-drive-based navigation system with seven-inch colour screen, mobile wi-fi hotspot capability and a parking assistant that features no fewer than 12 ultrasonic sensors to guide the car into a tight spot. Audi has also announced a plush 'S line Plus' specification to slot above the usual SE and 'S line' models. It gets larger 19-inch alloy wheels, privacy glass and standard metallic paint, while on the inside there's SD card-based navigation, perforated leather and Alcantara combination upholstery, cruise control and the Audi parking system plus with acoustic and visual guidance. At £2,350 above the S line trim, you'll need deep pockets.

The Q3 improves on the already impressive figures of existing models and the Cylinder-on-Demand technology for the latest 1.4-litre engine spells an almost diesel-like 50.4mpg on the combined cycle. Above it, the quite scarily potent RS Q3 can even record 32.8mpg if you don't give the turbochargers too much work to do. The 150PS diesel returns a combined figure of 61.4mpg and emissions of 119g/km. Go for an S line version with the bigger alloys and those numbers are 60.1mpg and emissions of 122g/km. Like most Audi models, once you've taken the pain of the initial asking price, ongoing costs should be manageable. As long as you don't go too berserk when choosing options, you'll have those reassuringly plump Audi residual values to fall back on, by far the biggest ticket item when it comes to overall cost of ownership in this corner of the market.

Quietly and inexorably, Audi tends to develop its models until there aren't too many valid reasons for not buying them. Somewhat counter to many expectations, it's not always a manufacturer that gets things 100 per cent right straight from launch, but it listens and learns and doesn't make the same mistakes twice. The Q3 has done reasonable business for Audi but some of its rivals have shown how far it's got to go to be the sector leader. This round of improvements makes it better to drive and a bit sharper to look at. Boosting the efficiency and the amount of standard equipment are both solid sales tactics and prices haven't moved a great deal despite Audi offering a good deal more car. Is it enough to put the Q3 where Ingolstadt demands? Maybe not right away, but we wouldn't bet against it getting there in the longer haul.