There are several car manufacturers who already have integrated augmented reality (AR) into their production cars, including BMW, Jaguar, Mazda and Mini. Using the screen in the centre console of the car, essentially a computer within a dashboard, the cars are able to give motorists extra guidance about their surrounds in real time, right in front of their eyes. AR is currently capable of displaying the likes of the speedometer, land guidance and directions – but things are about to get a whole lot better.

The table below shows the automotive industry's predicted spending on augmented and virtual reality (VR) worldwide in 2017 and 2025. In 2025, the global automotive AR and VR market is forecast to reach about $673 billion, up from $0.21bn in 2017. That's a staggering 320,000% increase in investment in only 8 years. Technological advancement in connectivity is a major reason that has driven the fast growth of the market.

Of course, this level of investment and focus on a particular technology, similar to electric cars in the previous decade, brings quick and sharp innovation. Within the next 5 to 10 years, AR in cars are tipped to leave the dashboard and make its way on to our windscreens. Mercedes-Benz demonstrated this in their DICE, which stands for Dynamic & Intuitive Control Experience, concept video. The future for this technology is certainly exciting and looks set to boom.

With this in mind, Vanarama visualised the 4 standout ways that AR is about to revolutionise the automotive industry, and could be a part of your motoring experience very soon:

Read on to find out how AR on your car's windscreen could look within the next decade.

The 2020 Mercedes-Benz GLE is widely considered to be the first car to truly implement a "next level" standard of augmented reality, more than simply displaying the car's speed or petrol usage. Mercedes-Benz are an early mover in this regard.

The GLE has implemented an AR navigation screen, capable of displayed navigational instructions and information over objects in real time through the live camera view within the dashboard. Turn instructions, street names and building addresses are just some of the mapping features that display to the driver as they roll on by. These nuggets of information live track the terrain as the car passes, meaning they appear to hover over the locations no matter how fast or slow the car is moving – the technology adapts to the speed and distance of the car comparative to the object.

However, this technology now looks set to make the jump from the dashboard to the windscreen, and the big players in the mapping market are beginning to take notice. Late last year, Google Maps began its rollout of what they are calling "Live View". This enables the user of any smartphone to use AR to display virtual signposts and directions in the real world, similar to what Mercedes-Benz have done with the GLE. This should make it much easier to get to your destination without getting lost.

Naturally, any move that Google makes, Apple isn't far behind. In July 2019, Apple filed a patent with the US Patent & Trademark Office. It points out that it often isn't easy for a driver to work out which lane they should be in based on a bird's eye view of a road from a flat screen. The summary of the patent describes how it would work, "For instance, some embodiments can augment a user's perceived reality by capturing images in front of the user (e.g., in front of a vehicle) and superimposing a navigational layer over a display of those captured images in real time."

As you can see by our visual above, our view of the road from inside our cars could look extremely different in the years to come, with markings on the sides of the road to make you aware of the ragged edges, the ability to magnify road signs and route trackers. 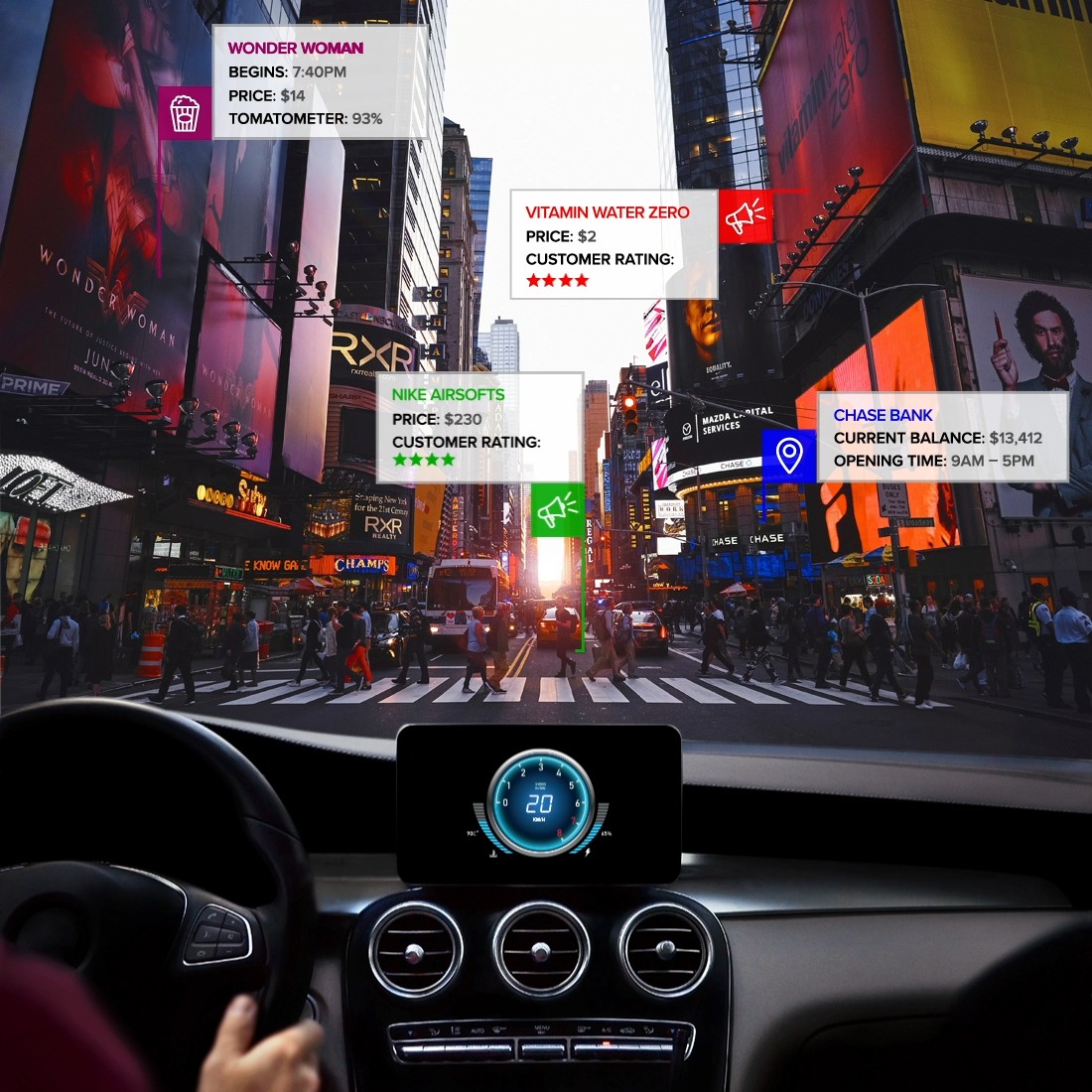 Digital marketing experts estimate that most Americans are exposed to around 4,000 to 10,000 ads every single day, according to Forbes – and that trend looks set to continue, or even increase, with augmented reality marketing within cars. According to AR Insider, AR advertising spend is predicted to hit $2.6bn in 2022, a huge figure when compared to the 2017 total of $167m. This just goes to show the massive growth in AR technology and the userbase.

Our graphic shows what AR advertising in cars could look like, promoting movies, displaying your balance as you drive past the bank, or even pinpointing some shoes a passer-by is wearing and creating a virtual advertisement right on your windscreen. According to Ruby Garage, what makes AR advertising so appealing to the view is the emotional connection – being able to almost see and feel the object. It's also more cost effective than traditional print advertising.

It's not only within the car that the worlds AR and marketing will collide, it also will assistant brands to promote their vehicles to potential new buyers. An example of this is Land Rover's AR marketing campaign to support the launch of its Discovery Sport model. This is aimed at bridging the gap between the announcement of the vehicle and it actually arriving, fully produced, into showrooms.

Users were able to wear a VR headset, which would then depict a life-like 3D model in front of customers eyes, right in the middle of the showroom! This allows customers to embark on a complete virtual tour of the car, while in reality, the real-life version of the car is still being assembled in the factory. According to BCG, 9 out of 10 consumer advertisers are planning or already do use AR in their marketing campaigns, so it certainly looks like it's here to stay. 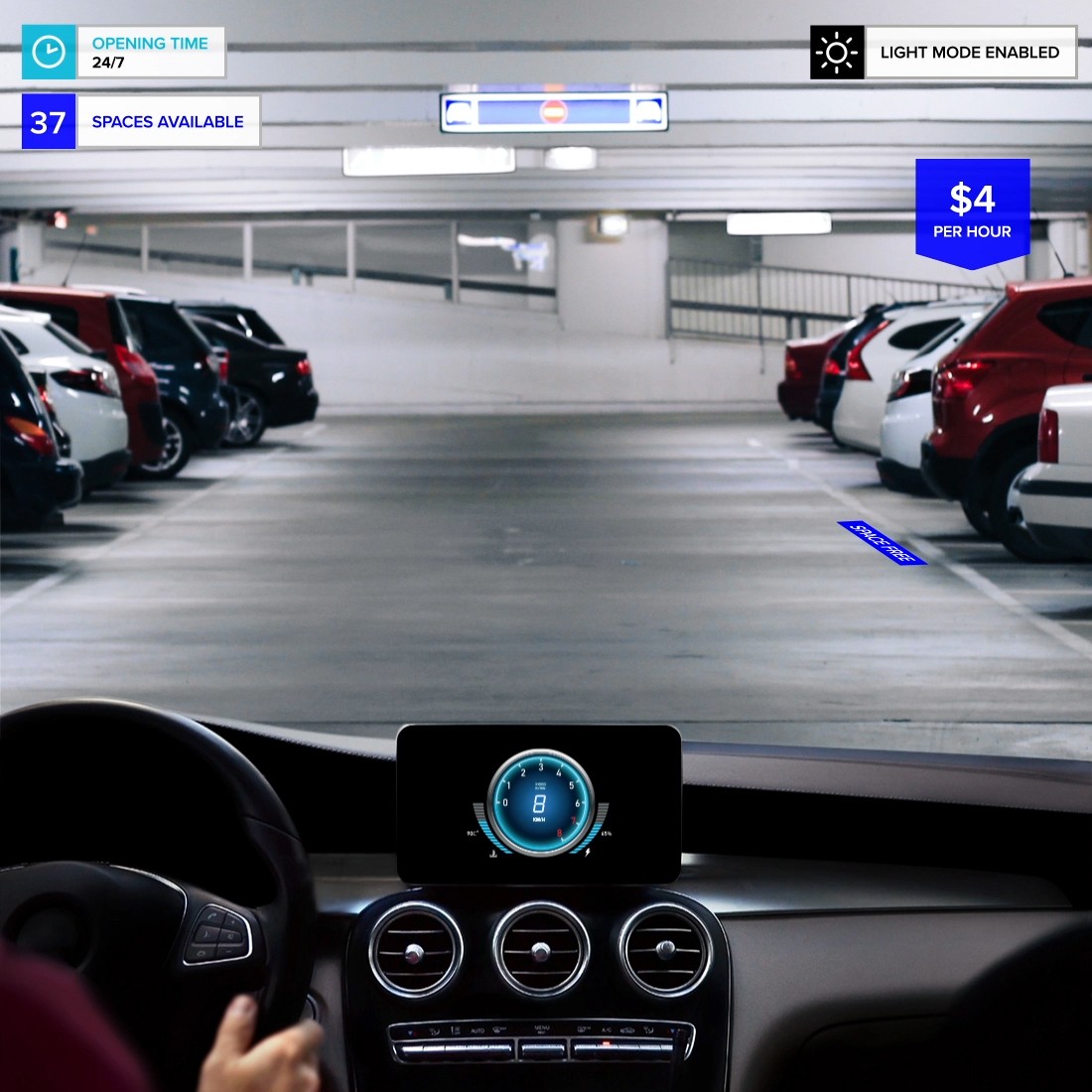 This demonstration video by BMW shows where we are at when it comes to parking assistance using AR at the present time. As it goes, parking assistance using AR is the most taken up and implemented use of AR currently used in cars today. Many vehicles now come with a rear-view camera as standard. When parking, an augmented field is projected on to the parking space behind the car. The camera from which the AR is generated shows projector and distancing lines, giving the driver a better perception of where they are compared to other cars, and if their car will fit in to the parking space or not.

Once thought of as a gimmick, this type of AR has been included in cars for around 5 to 10 years in different forms and has proven itself to be an essential and useful tool in any luxury car. Especially for motorists who hate parking!

The next stage will go further than just showing the graphic on a dashboard mounted camera. Due to the connectivity of cars in the future, being able to have a constant internet connection, AR will be able to spot empty spaces in a busy car park and highlight them to the driver live on the windscreen. The windscreen will also show how much the car parking space is per hour, along with opening times and other useful information.

The most fascinating part of AR in this example is the daylight mode. Some have speculated, and it is just speculating as this stage, that the windscreen could possibly be fitted with advanced infra-red cameras to illuminate dark car parks of side alleys on the driver's command. This does sound a little far-fetched at the moment, but in all honestly, it was to cool to leave off our list. 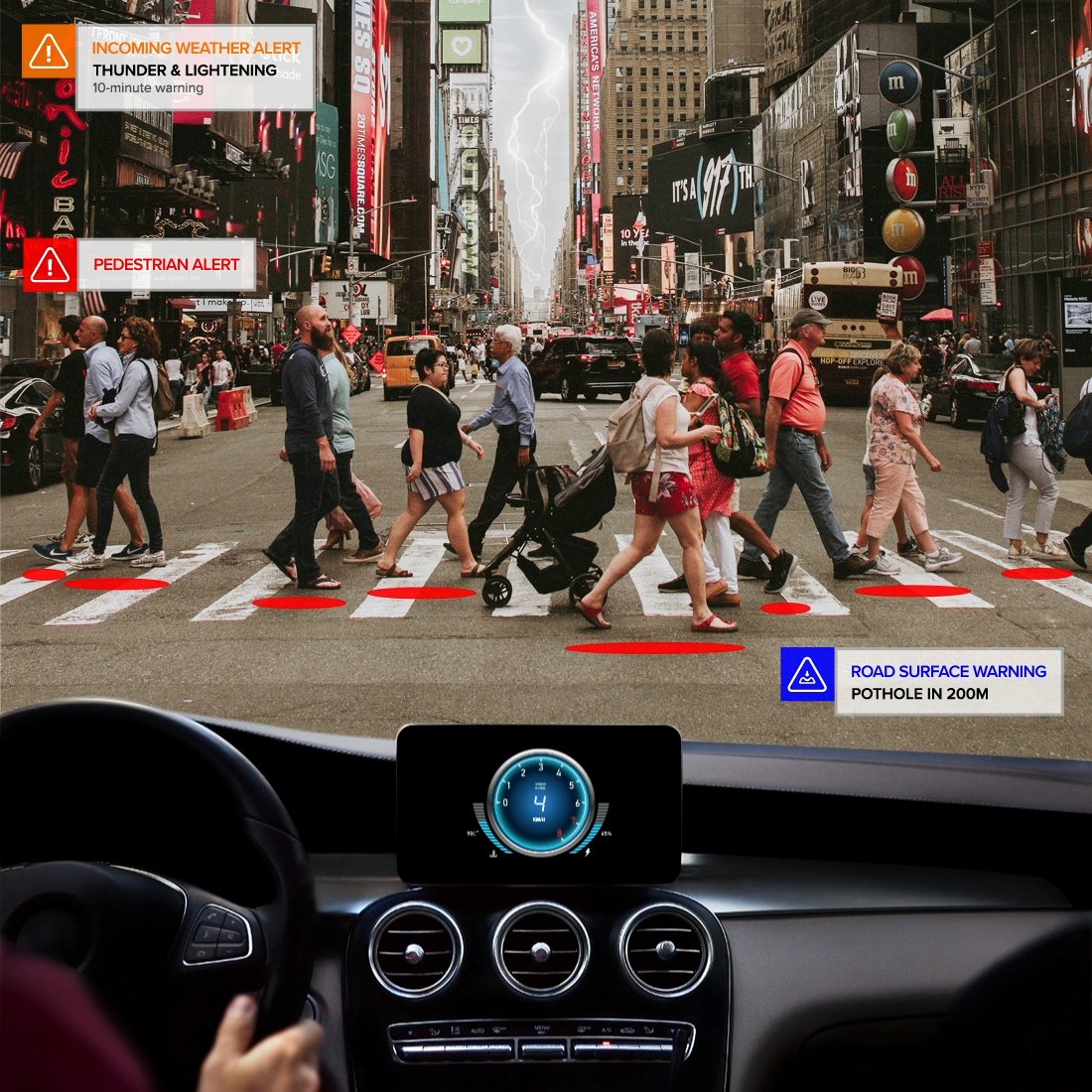 PSA Groupe, the French owner of several multinational car brands including Peugeot, Citroen, DS, Opel and Vauxhall have already begun making headway in regard to improving road safety using AR. The group has developed a heads-up display system, which projects light on to the windscreen of their cars. Safety features include a lane keeping assist, obstacle warning and pedestrian detection.

Now, before you start getting excited, this isn't the full AR experience that we have dreamt of as it only covers a small section of the windscreen, but it's definitely a start. That why we've created our visual above, to give you an idea of what this technology could look like in the future. Weather alerts could be added to warning drivers of a potential downpour or thunderstorm, along with proximity sensors to make the driver aware of how close other cars are in their surroundings. They can therefore take measures to avoid the approaching hazard if needed.

According to Hacker Bay, 1 in 4 accidents involve mobile phones. It's believed that AR will prevent accidents by providing text messages and phone calls directly on your windscreen, with motorists no longer being tempted to scramble around their pockets to read their latest text.

Click on the video below to watch how all 4 of these innovative technologies will interact with your windscreen in the future.

At Vanarama, we fully support any strides being made to improve the road safety of motorists, and we hope that this technology will go a long way in helping this in the future. As it happens, we are also the safe bet when it comes tovvan leasing deals, so be sure to check out our latest special offers while you're here. If you're interested in other car technologies, good and bad, check out our World's Weirdest Car Patents blog post.