Can You Guess Which Cars These Vintage Adverts Belong To?

The 1970s and 80s are infamous in automotive circles for throwing up some of the most hilarious print advertisements of all time. In those days, car brands would regularly use outlandish comparisons between themselves and other manufacturers to sell their cars, cheesy straplines and poke fun at a fragile male ego.

Our Favourite Examples Include:

Unlike today, the advertisements hardly have anything to do with the cars they feature, and instead focused on the what the car meant to people socially. You would never guess what car many of the straplines are referring to.

Keep an eye out for the answers to which car the poster belongs to at the bottom of the page. 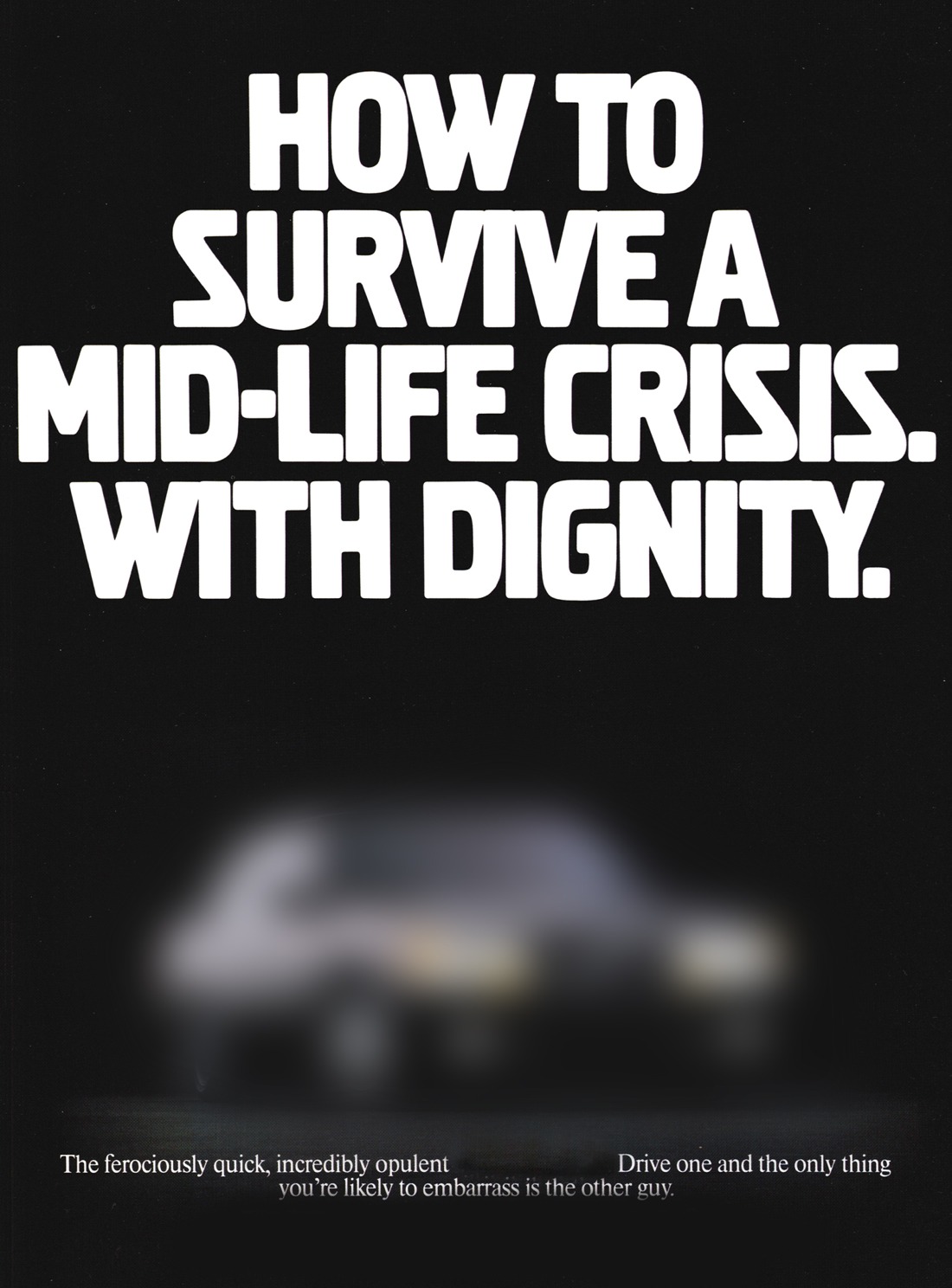 Arriving in 1984, this mid-sized family car was intended to offer style, performance and luxury at an affordable price. The slogan "How to survive a mid-life crisis with dignity" was indicative of the 'cheeky-chappie' style used throughout automotive advertising during that era. The car was also a popular pick as a police car in several countries around Europe, especially in the home of the manufacturer, Scandinavia. 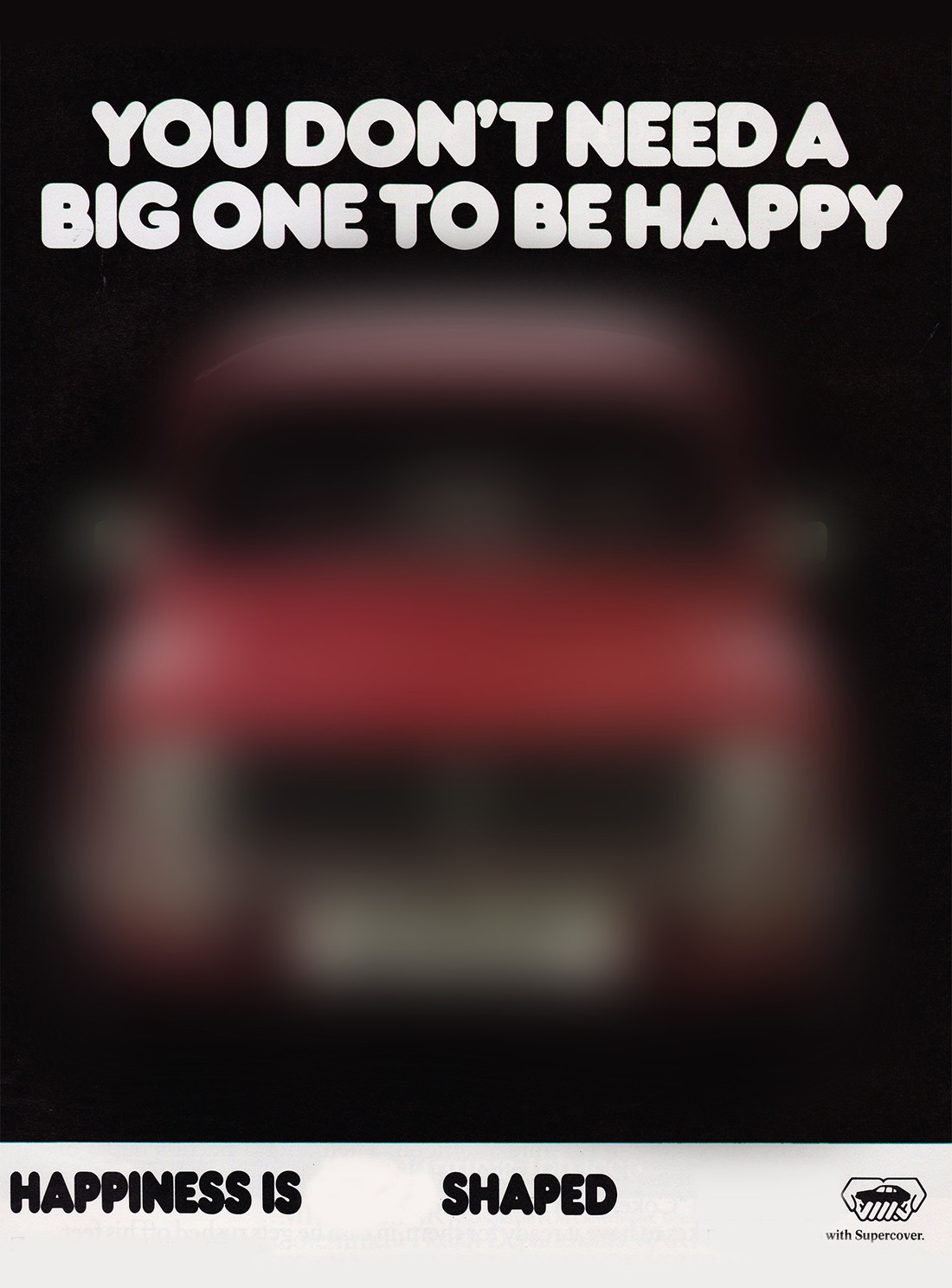 Considered today as an icon of British motoring, this pint-sized car certainly made a big impression. Originally released in 1959 and advertised under the slogan "You don't need a big one to be happy", the car's space-saving transverse engine allowed passengers and luggage to take up 80% of the car's interior space, which was unheard of at the time. This added a new meaning to the phrase "It's bigger than it looks." 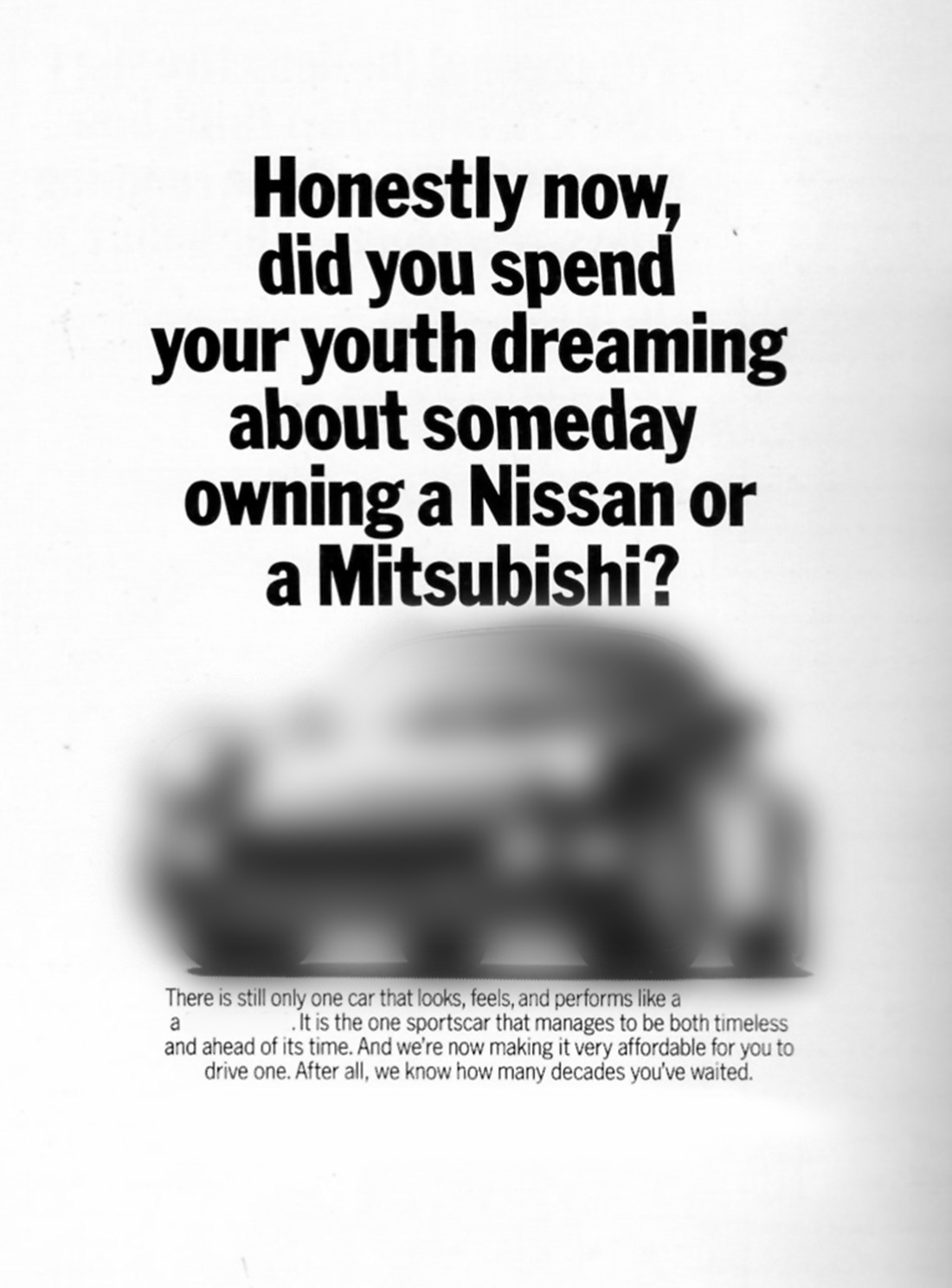 The manufacturer of this car wasn't scared to mock other less popular car brands upon its release in the 1970's. The advertisement asks the reader "Honestly now, did you spend your youth dreaming about someday owning a Nissan or a Mitsubishi?" This tagline is in stark contrast to today, as many young drivers would have grown up watching the movie 2 Fast 2 Furious. The main character drove a Mitsubishi Evo and Nissan Skyline which catapulted the demand of each car, meaning some might have actually grown-up dreaming of owning one over the car in the advert. 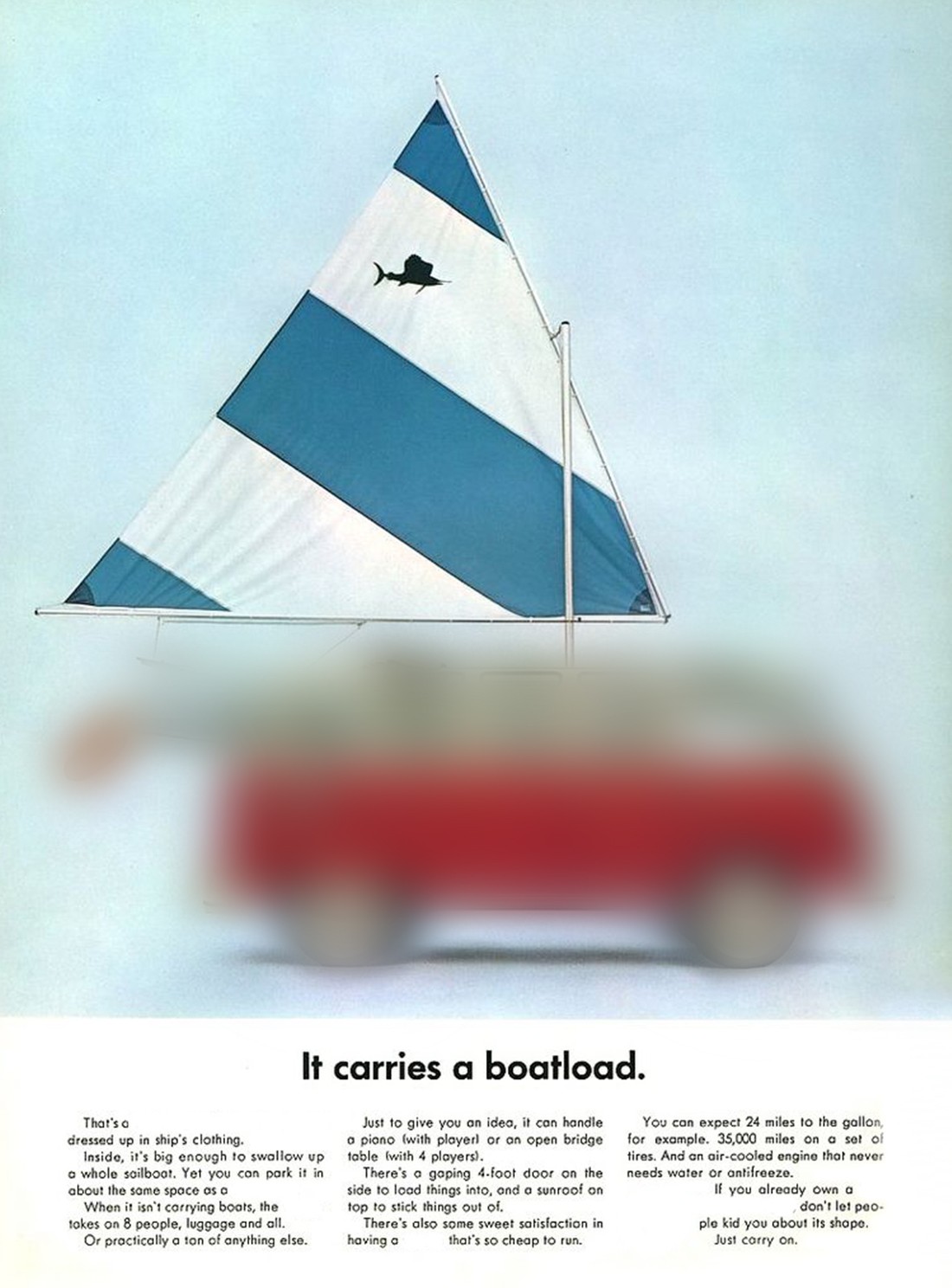 This popular people carrier could also be used to carry a "boatload" of luggage, according to the manufacturer's advertisement. Although first released in 1950, the car has proven its longevity over several decades and a sixth-generation edition is still on sale today. The manufacturer also recently announced an electric version that will be put on sale in 2022, which bears a sticking resemblance to the first-generation version above. 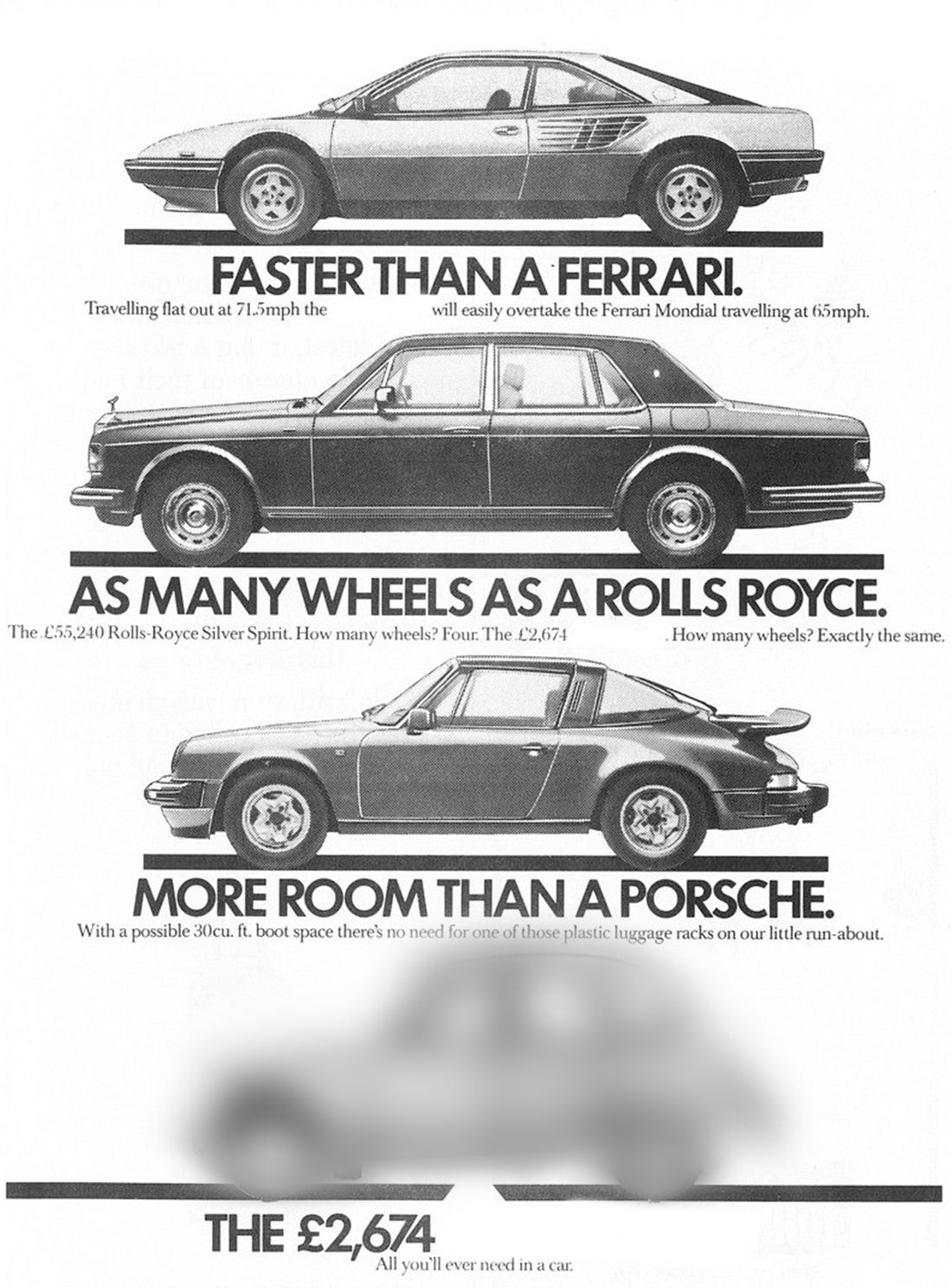 Car adverts 50 or 60 years ago would often be self-deprecating, something which is rarely the case today. One of the best examples of this is the advert above, in which this famous hatchback car compared itself to a Ferrari and Rolls Royce, with a few caveats of course! In reality, the car had a top speed of 40MPH thanks to the 12-horsepower engine – some way off that of a Ferrari Mondial. 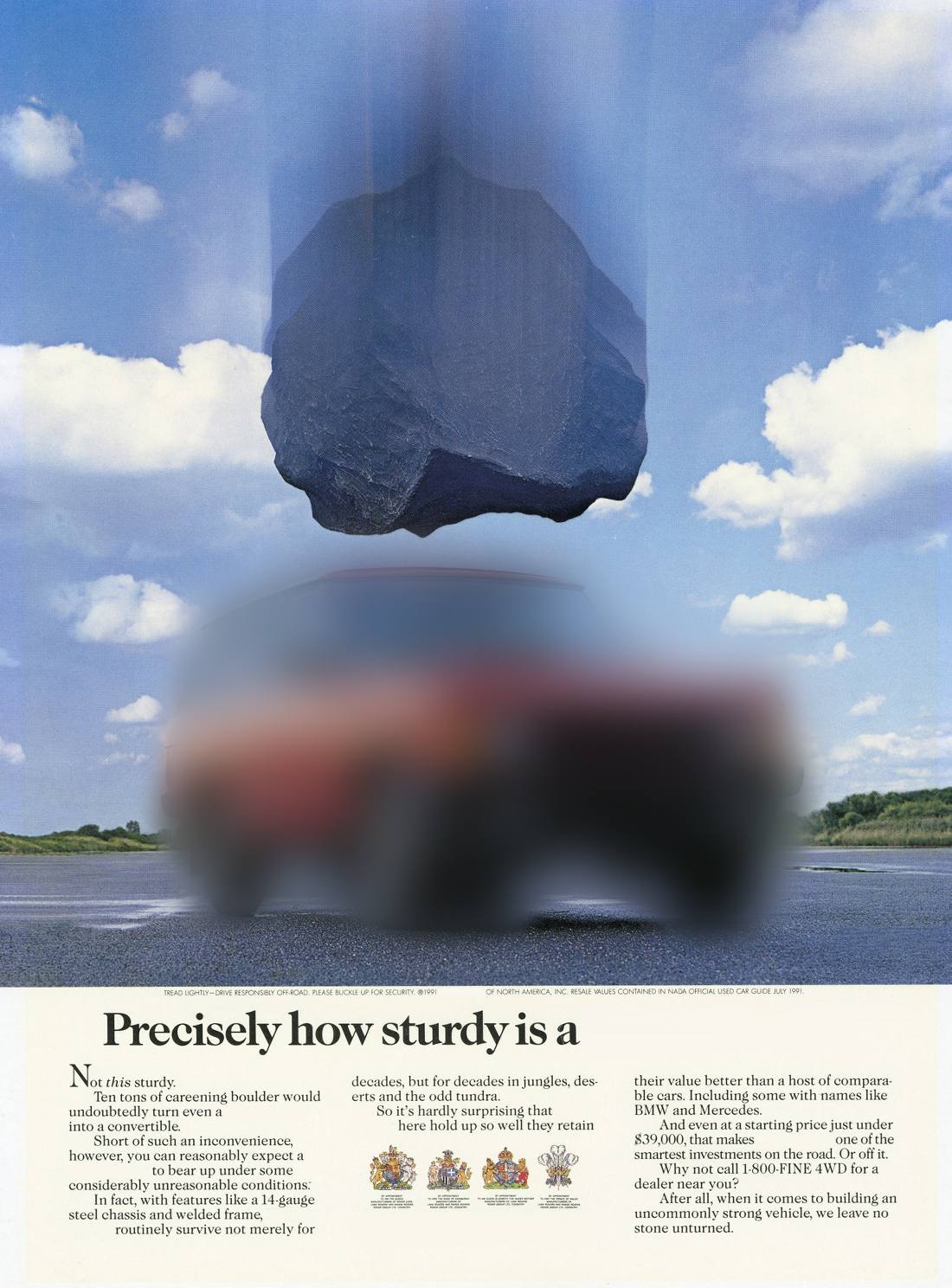 In an advert that would certainly go against the health and safety standards of today, this luxury SUV comes with a reputation for toughness and reliability. The manufacturer poses the question: "Precisely how sturdy is a …", with the small print outlining the car definitely isn't sturdy enough to handle a boulder crashing into its roof, despite the main image of the advertisement. The car in the advert was introduced in 1969 and is still a firm fixture on UK roads today. 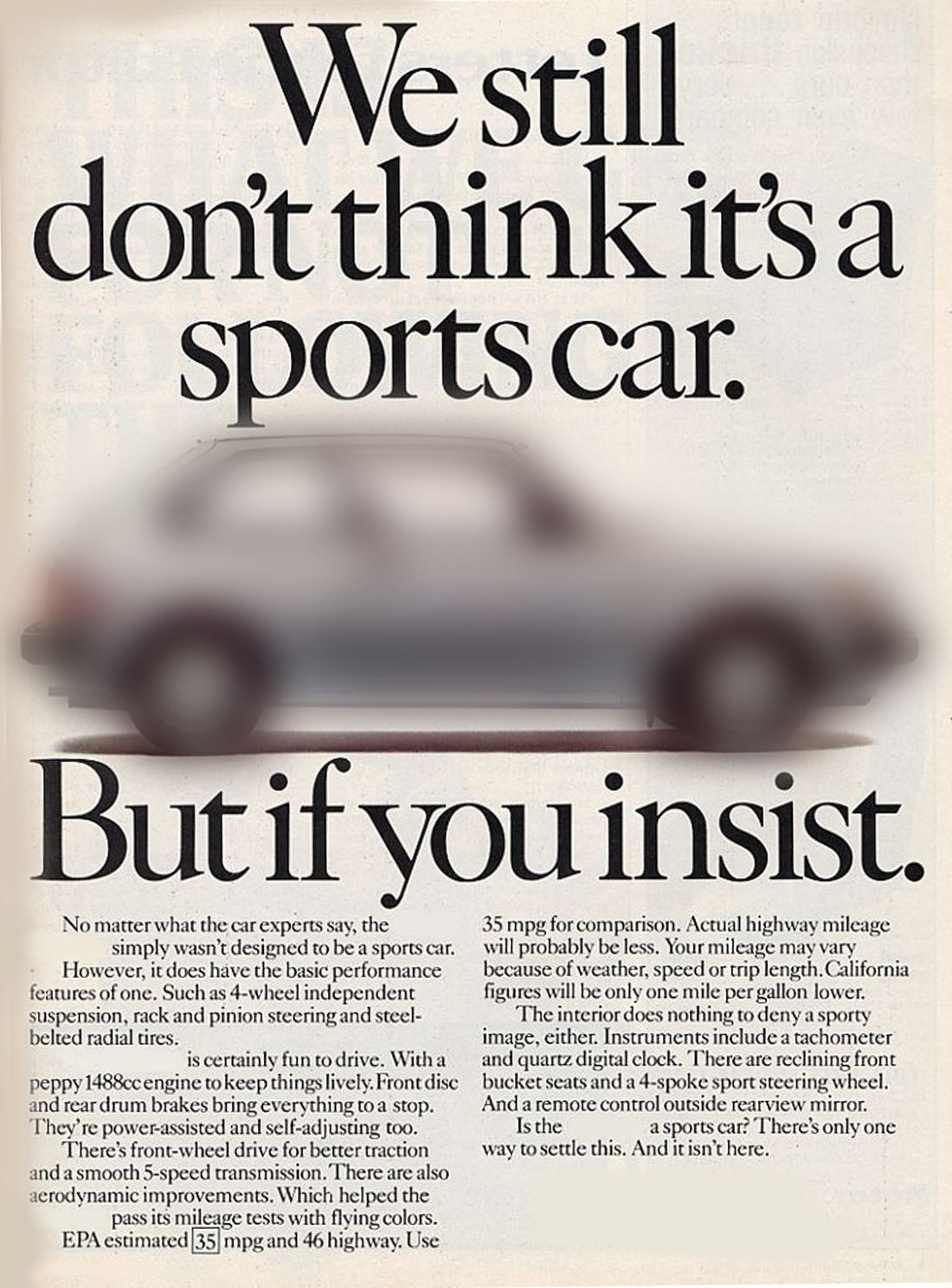 Cars produced by this Japanese manufacturer have always been famous for their handling, and this example was no different. Playing on this fact, the slogan "We still don't think it's a sports car. But if you insist." hammers the point home. The car first hit the market way back in 1972 and become a firm favourite with the younger generation of motorists, acting as a sensible family car during the week and a hot hatch on weekends. 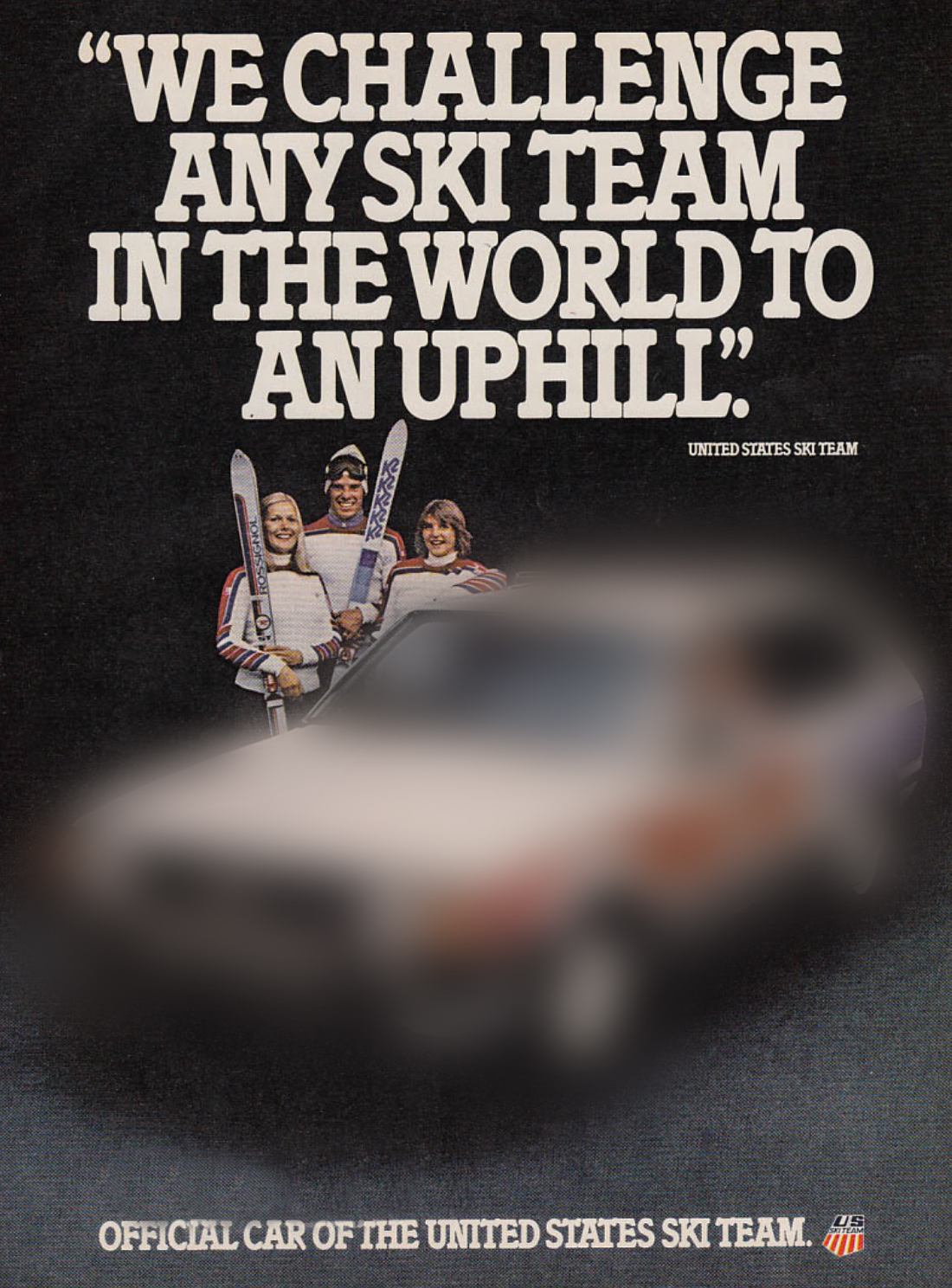 This automotive manufacturer, renowned for its off-road and rally capabilities, used a partnership with the United States ski team to shout about their new creation. The slogan "We challenge any ski team in the world to an uphill", is a play on both the capabilities of the car and of the ski team. The car was first released to the public 1972 and was introduced at the Winter Olympics to show it could tackle even the harshest weather conditions. 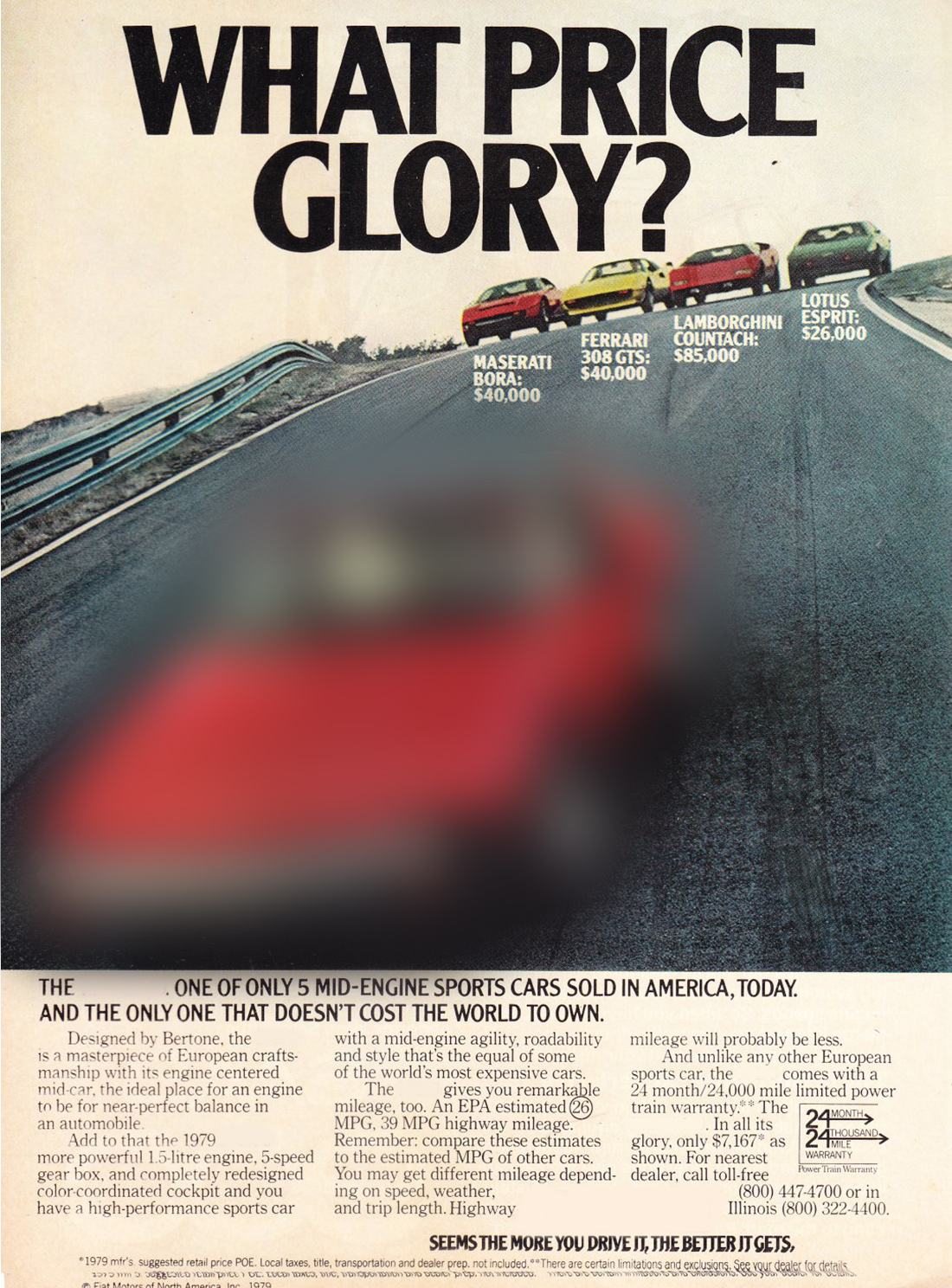 The advert bearing the slogan "What price glory?" compares a relatively inexpensive car to more exotic and pricey counterparts, a common tactic used in 1970s and 80s automotive advertising. Although commonplace in the modern era, a mid-engined car was something of a novelty 50 years ago and was a real USP. Mid-engined cars where renowned for excitement, speed and great handling. It's only in the small print of the advert that you realise that this particular mid-engined Italian car only has modest a 1.5L engine unlike the Ferrari and Lamborghini in the background. 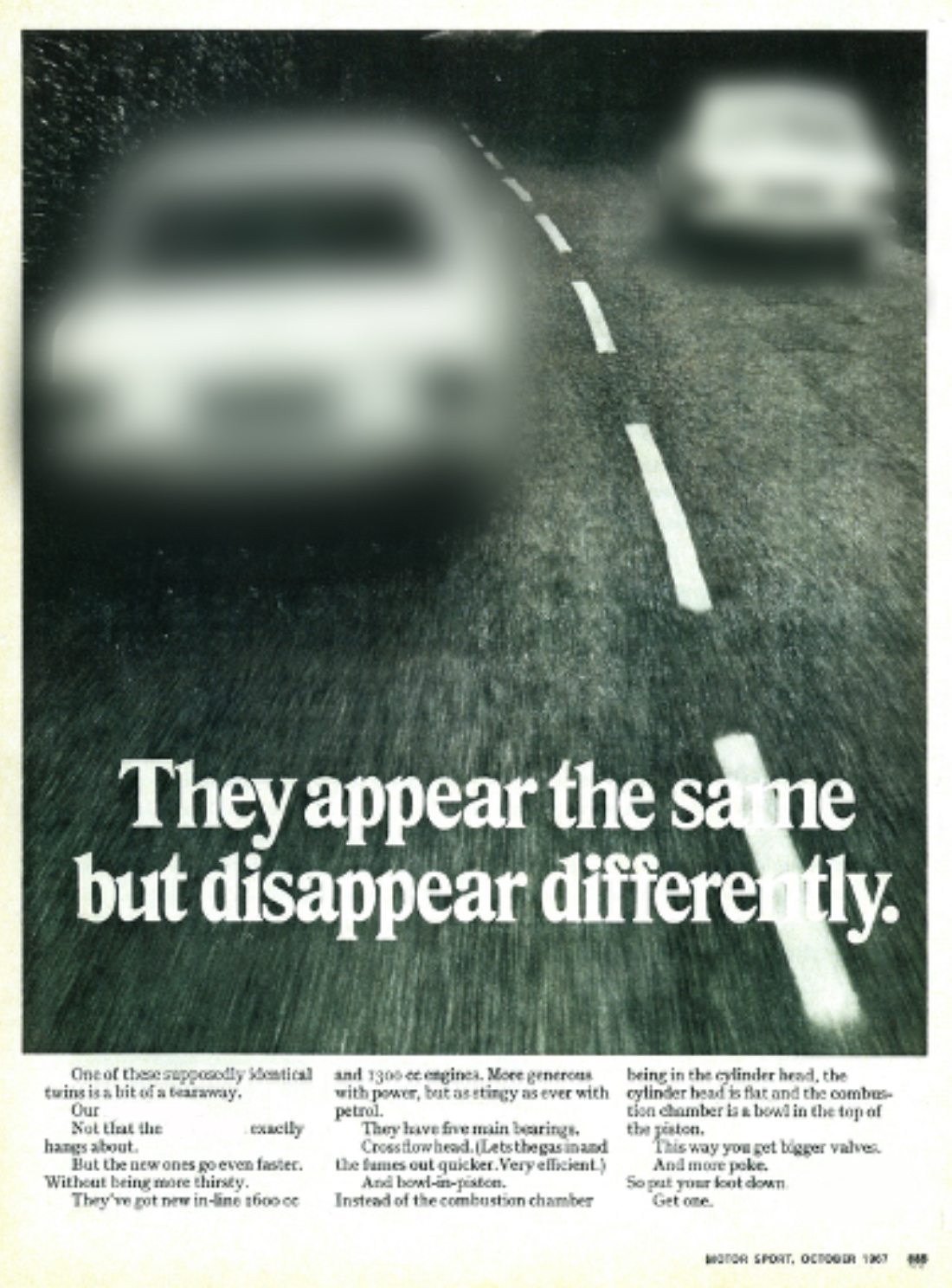 This advert was to promote a new edition of a car that had become a firm favourite with motorists during the 1960s, and eventually becoming the UKs best-selling car of the 1970s. The slogan "They appear the same but disappear differently" alluded to the fact that the exterior of the car hadn't changed much, but the engine had received a significant upgrade compared to the previous model.

Looking for your next car in time for winter? Head over to our car leasing deals page. If you're looking for something else to do during lockdown once you've finished our quiz, make sure you check out our concept cards for the top 10 Vanarama National League players NOT in FIFA21 Ultimate Team.