All around the world – people love cars. It’s this love that has inspired an array of niche cultures to emerge, a world of crazy car mods and paintwork. Despite many of the modifications that enthusiasts carry out on their cars lowering the resale value of their car, they remain undeterred, such is their affinity for their chosen culture.

Over the last 50 years or so, the world has seen an almost never-ending stream of car cultures forming in countries across the globe – some of which take the definition of a car to the absolute extreme.

Vanarama has created our own car culture interactive map, capturing everything from American Hot Rods to Japanese Stance cars all in one place – ready for you to explore. We showcase each car culture with a short video showing the action that takes place, along with the extreme sounds that are produced, the most common cars, and the cost of purchasing a car in that culture.

Explore our interactive map by clicking here. Pay special attention to Japan and USA in which multiple car cultures have developed. Alternatively, learn more about five of the most iconic car cultures below… 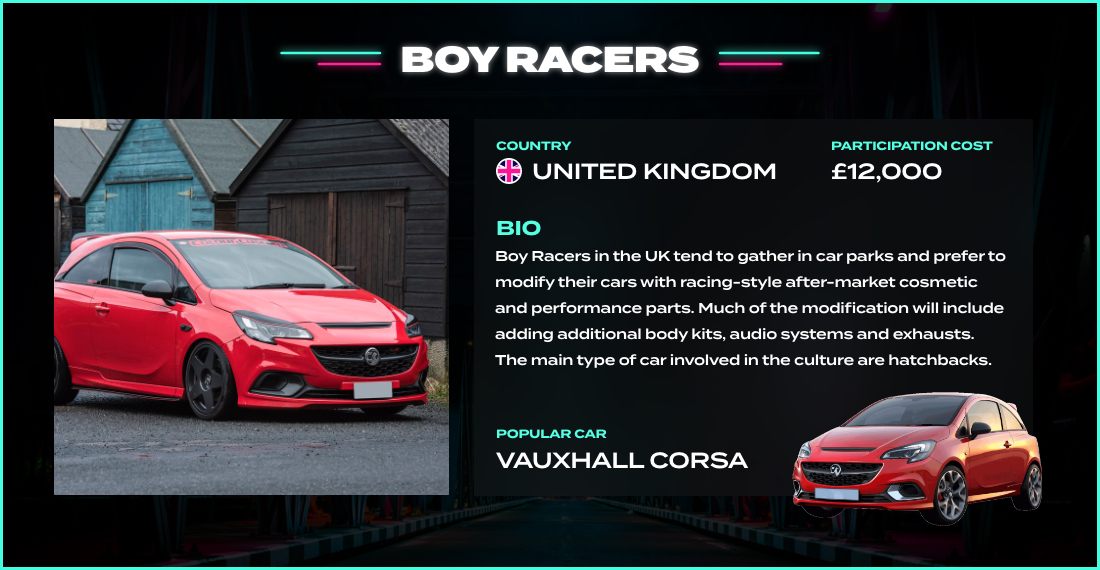 Boy Racers in the UK tend to gather in car parks and prefer to modify their cars with racing-style aftermarket cosmetic and performance parts. Much of the modification will include adding additional body kits, audio systems and exhausts.

Another feature that boy racers are known for are their loud music systems that can often be heard from miles around. The main types of car involved in the culture are hatchbacks such as the Vauxhall Corsa, Volkswagen Golf and Ford Focus.

Research in 2015 showed that Birmingham is the UK’s capital of Boy Racers. Data from the DVLA revealed that 98 drivers with Birmingham postcodes had ‘boy-racer type endorsements’ on their records called MS50s – which mean ‘motor racing on the highway’. The term ‘Boy Racer’ is almost exclusively used in the UK. The Australian equivalent is ‘Hoon’. 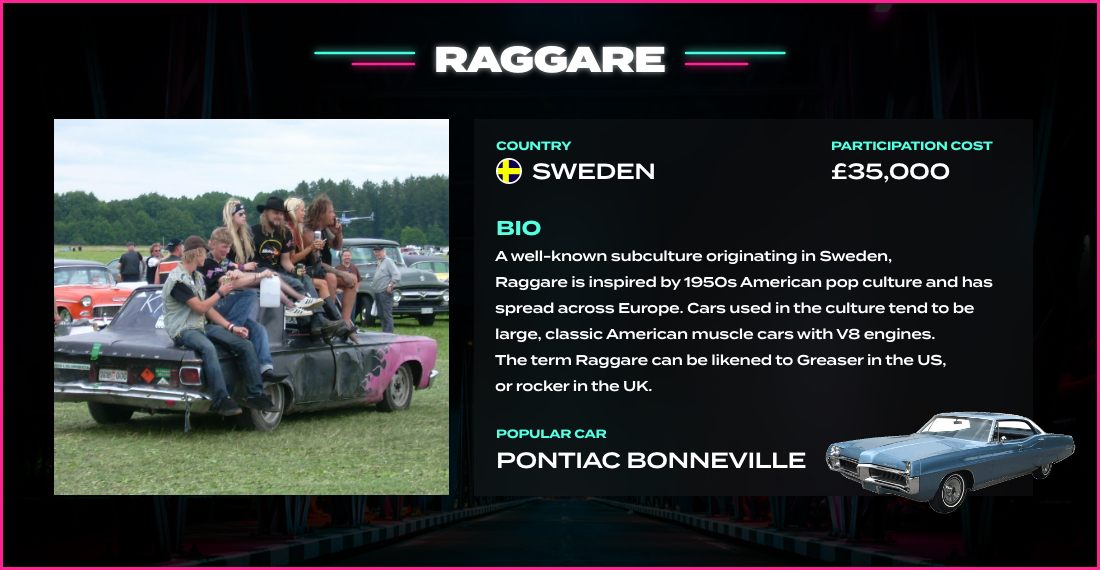 A well-known subculture originating in Sweden, Raggare is inspired from 1950s American pop culture and has spread across Europe. Cars used in the culture tend to be large, classic American muscle cars with V8 engines such as the Pontiac Bonneville, Dodge Phoenix and Buick Roadmaster. Not only popular in Sweden, but the car culture can also be found in the rest of Scandinavia, along with Germany and Austria.

Although Raggare was initially thought of as a counterculture when it originated, it is now mainly middle-aged adults who love classic American cars. The term Raggare can be likened to greaser in the US, or rocker in the UK.

Think of Raggare cars as a mix from their original state of classic American cars and hot rods, with some 1950s pop culture thrown into the mix also. A 2013 feature in Jalopnik described the car culture as “Raggare are members of a subculture in Sweden, the frozen bit stuck in between the frozen bits of Finland, Norway, and just above Denmark. They like classic American cars, rock music, drinking beer, and a lot of the South in general.” 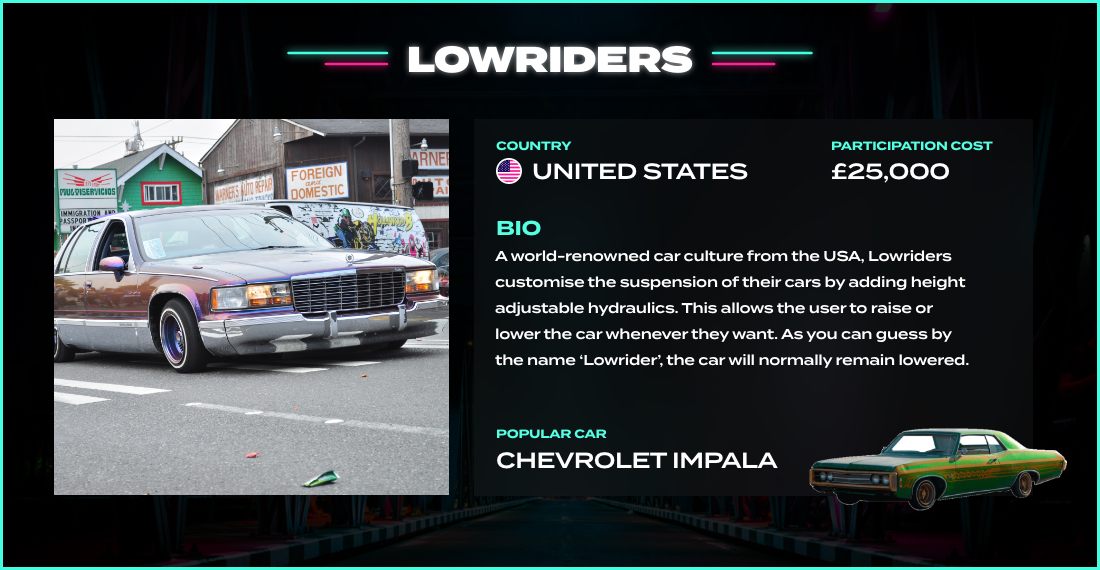 One of the most world-renowned cultures to come out of the USA, Lowriders customise the suspension of their cars by adding height adjustable hydraulics. This allows the user to raise or lower the car whenever they want.

As you can guess by the name ‘Lowrider’, the car will normally remain lowered. Another hallmark of Lowriders is custom paint jobs that are often reflective of the Latino American culture from which the car culture originated. Favoured cars of the culture includes the Chevrolet Impala, Buick Riviera, and Pontiac Torpedo.

Unlike other cultures, which value quick and aggressive driving, Lowriders prefer the complete opposite. The roots of Lowriding trace back all the way to the 1940s during the post-war prosperity boom years. Their motto is “low and slow” with the objective being to cruise as slowly as possible. The culture has spread to many other parts of the world and is especially big with young motorists in Japan. 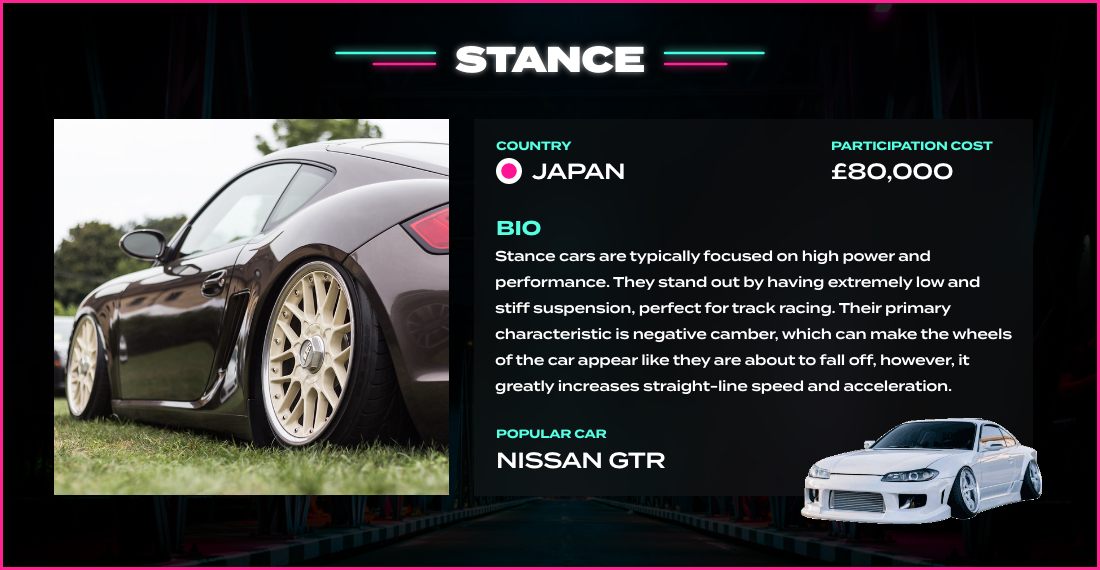 Stance cars are typically focused on high power and performance. They stand out by having extremely low and stiff suspensions, perfect for track racing. Originating from Formula 1 and the Drifting scene, the car culture has become a favourite in Japan and many other countries across the world. The car culture is fond of hatchbacks, so Stance cars will generally be Volkswagen Polos, Mini Coopers, or occasionally coupes like the Nissan 350z.

Their primary characteristic is negative camber, which can make the wheels of the car appear like they are about to fall off, however, it greatly increases straight-line speed and acceleration. Although there is no set number of degrees of negative camber a Stance car should deploy, it can range all the way up to 45°. In comparison, regular road cars have around 0.5° - 1° of positive camber. 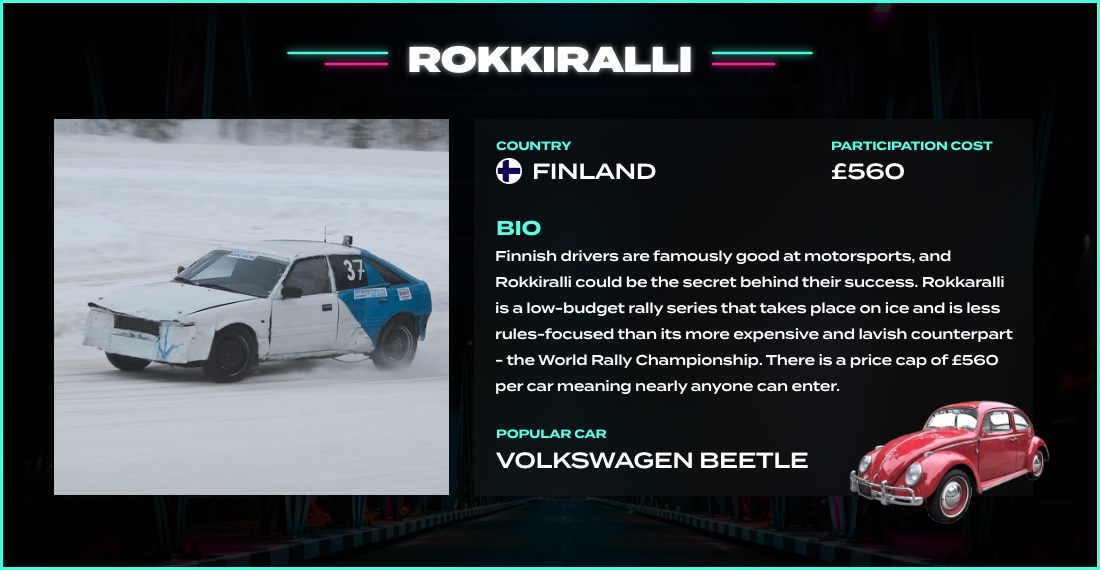 Finnish drivers are famously good at motorsports, and Rokkiralli could be the secret behind their success. Rokkaralli is a low-budget rally series that takes place on ice and is less rules-focused than its more expensive and lavish counterpart - the World Rally Championship. There is a price cap of £560 per car meaning nearly anyone can enter, while maintaining fairness across the field. The main cars that are used in Rokkiralli are Volkswagen Beetles and other hatchback models.

However, Rokkiralli cars are all unique. Due to the combative nature of the car culture, you can often find multiple cars being dismantled and put back together in all manner of combinations. The race is open to anybody, from 16-year-old amateurs to 60-year-old veterans.

For more automotive insights, fun quizzes, and industry news – make sure to check out the rest of the Vanarama blog. In the meantime, why not browse our current car leasing deals?

Disclaimer: Vanarama does not condone any illegal activities that might take place within each car culture.