The UK’s Most Car-dependent Regions

Despite signs that the first lockdown would reduce our reliance on cars and commuting, the UK quickly got back up to speed and pre-pandemic levels of congestion. In fact, some areas now have more traffic.

With unprecedented production delays and used car prices on the rise, Vanarama looks at the UK’s lasting reliance on cars and which regions are most dependent on four-wheeled motoring.

West Midlands the most car-dependent area of the UK

With an overall score of 79.8 on our car-dependency index, the West Midlands is statistically the region most reliant on cars. A heavy contributor to that is the area’s annual mileage per person of 9,138 miles, the highest by some way. 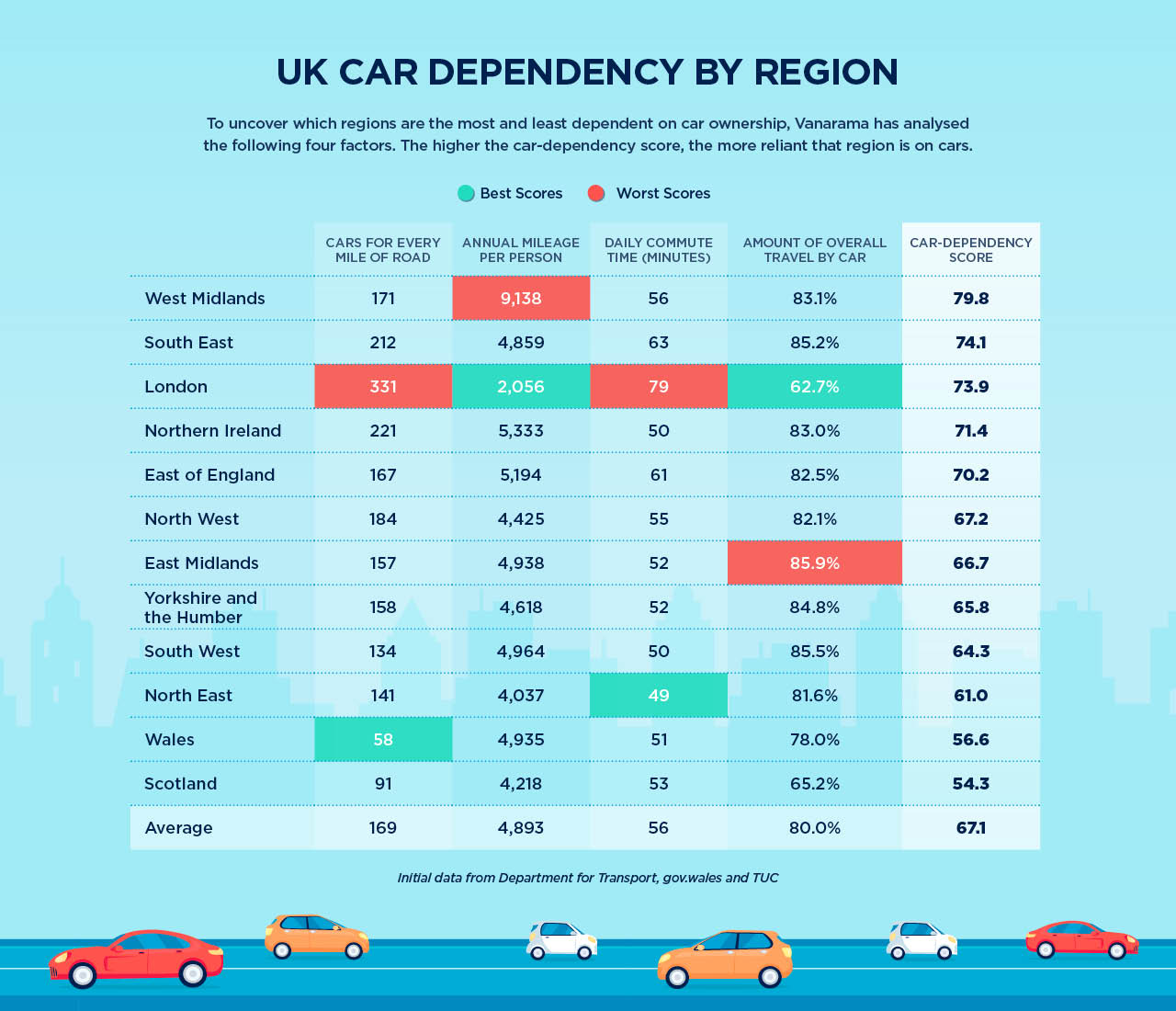 Only slightly better off is the South East, which is perhaps little surprise considering it is home to more than one tenth of Great Britain’s road length. It’s also the worst-hit area for fuel shortages, with petrol and diesel stocks at only 0-20% capacity.

Although London has the best scores for annual mileage and car travel as a percentage, the capital is let down by both the number of cars per mile of road and commute times – the worst in our study, placing it as the third-most car-dependent region.

The North East has the shortest commute times in the UK

As well as being the second lowest for annual vehicle miles, the North East also offers the shortest commute at 49 minutes and 12 seconds. London drivers will spend a further 30 minutes commuting each day – an extra five days behind the wheel every year. 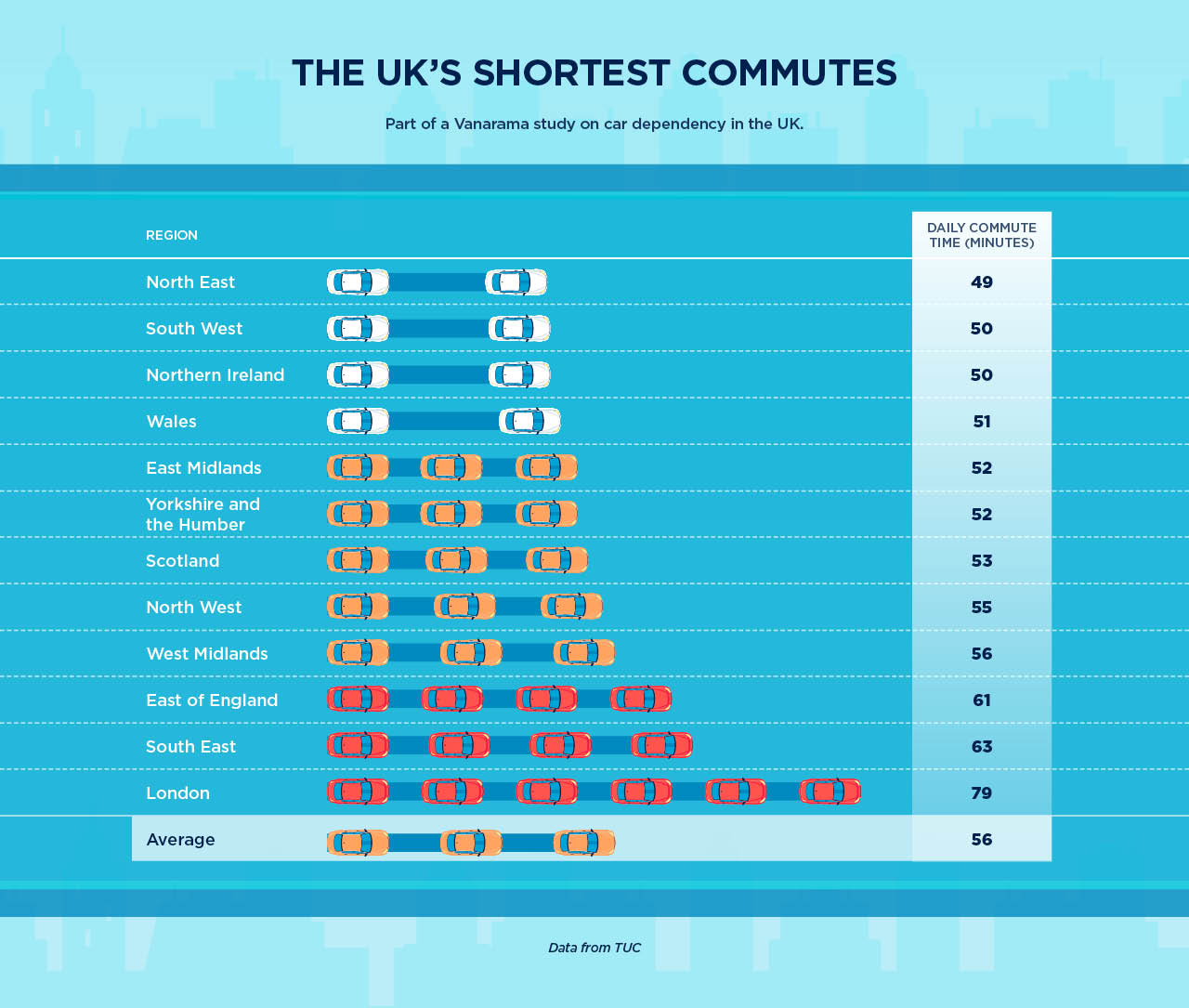 Scotland is also favourable for commuters, as the only other region with less than 100 cars per mile and a commute time of 53 minutes and 24 seconds.

South East drivers travel more than any other region

Motorists in the South East are the most travelled by some distance, collectively racking up 44.7 billion miles in 2020. Northern Ireland, by comparison, is less than a fifth of that with only eight billion – making its motorists the least travelled. 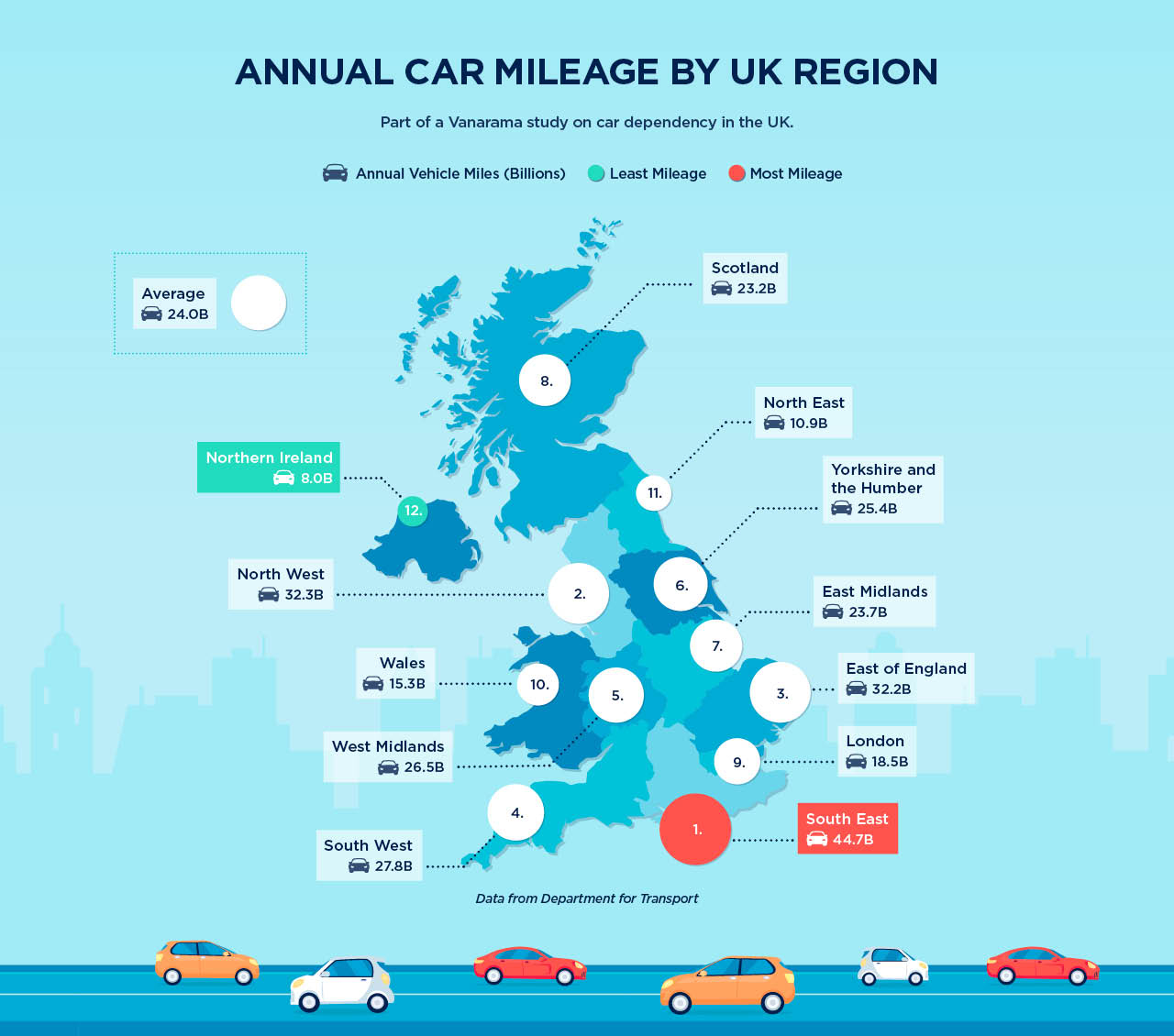 Despite its nine million inhabitants, London also comes out as one of the least travelled in terms of vehicle miles (18.5 billion), but considering the congestion levels that aren’t seen anywhere else in the UK, public transport will be a much more appealing option.

This is reflected in the percentage split – car travel in the capital accounts for only 62.7% of the overall, more than a fifth lower the East Midlands’ 85.9%.

London’s Ultra Low Emissions Zone, a bid to reduce pollutants in the capital by charging non-compliant vehicles, is expanding in late October 2021 – a change that will make it 18 times larger. 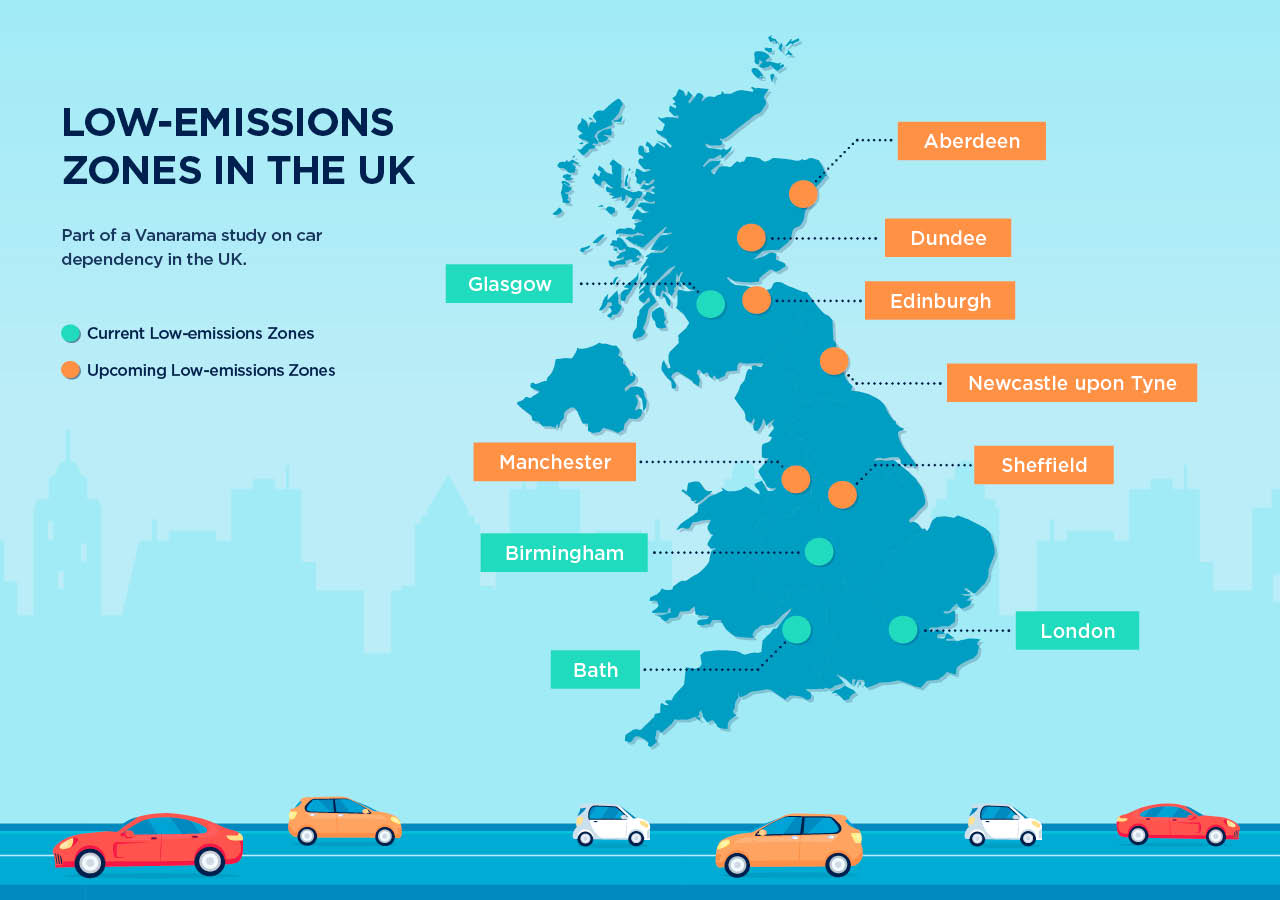 And as more examples crop up around the UK, our reliance on cars (or rather on petrol and diesel) is likely to face its biggest challenge yet. Currently, there are four cities operating low-emissions zones – London, Glasgow, Birmingham and Bath.

But the number of them could more than double by 2022, with six additional zones planned for Manchester, Newcastle, Sheffield, Edinburgh, Aberdeen and Dundee. Although several of them don’t punish private cars just yet, the rules may become stricter with time.

From a large database of figures on regional vehicle licencing, road infrastructure and population, Vanarama created averages for the four ranking factors. These informed the overall car-dependency score, with each factor being equally weighted. The higher the score, the more dependent that region is on cars.

For more insight, news and reviews, bookmark the Vanarama blog, or browse our latest offers if you’re in the market for a new motor.