In the high-pressure world of automotive tech, companies and consumers are always searching for the next big thing. Whether it's looking at how to make cars more eco-efficient or taking steps towards an autonomous future, there are no shortage of theories on what the future of cars will look like.

To ensure that they stay one step ahead of the competition, businesses will often look to protect any concepts that are born in their R&D department by filing for a patent regardless of how plausible or even useful they may be.

While we eagerly await the next breakthrough, let's take a look at some of the more bizarre examples submitted to patent offices across the world. 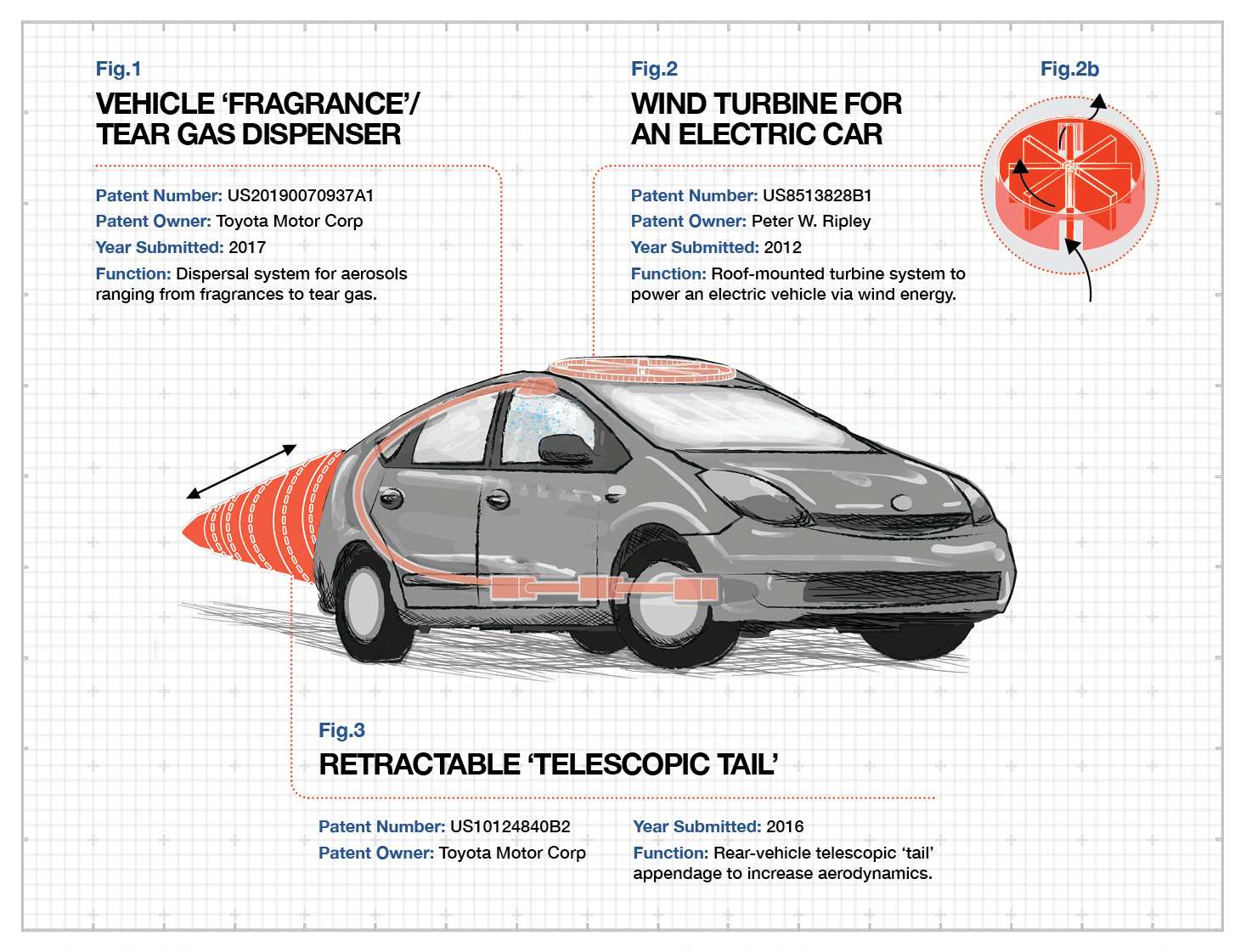 The weirdest eco, performance and defence patents include:

● Wind Turbine for an Electric Car: Harnessing the wind's power is a great solution where green energy is concerned but it's slightly less practical when the turbine is shoved into an electric car's roof.

● Retractable 'Telescoping' Tail: Aerodynamics are crucial to the performance of any car, however, when your solution is to attach a huge retractable tail – it might be time to return to the drawing board.

● Vehicle 'Fragrance'/Tear Gas Dispenser: Although it's listed as a 'fragrance' dispenser for a car's interior, this patent wastes no time in bringing up its potential use as a tear gas defence system. 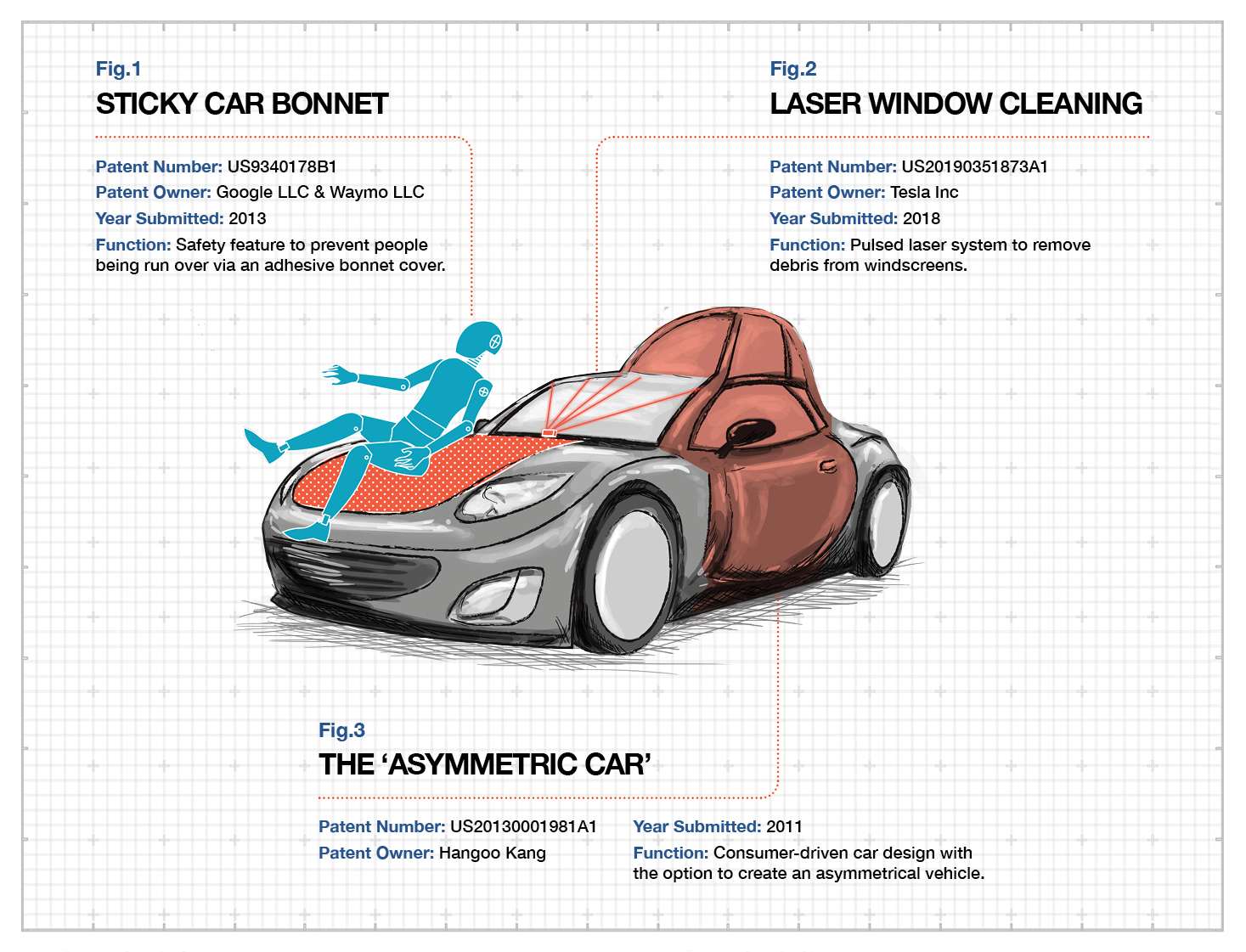 The weirdest safety, design and functionality patents include:

● Laser Window Cleaning: Squeaky window wipers would be a thing of the past if manufacturers switched to this high-tech laser system that Tesla are currently pushing for.

● The 'Asymmetric' Car: This concept would allow people more freedom to choose the design of their own car, even going so far as to allow asymmetrical vehicles. We feel this is something best left to the professionals.

● Sticky Car Bonnet: A safety feature design to stop people being run over, this solution acts like fly paper to pedestrians, ensuring they stick to the bonnet on impact.

3. Deployable Electric Motorbikes And A Conveyor Belt For Your Boot 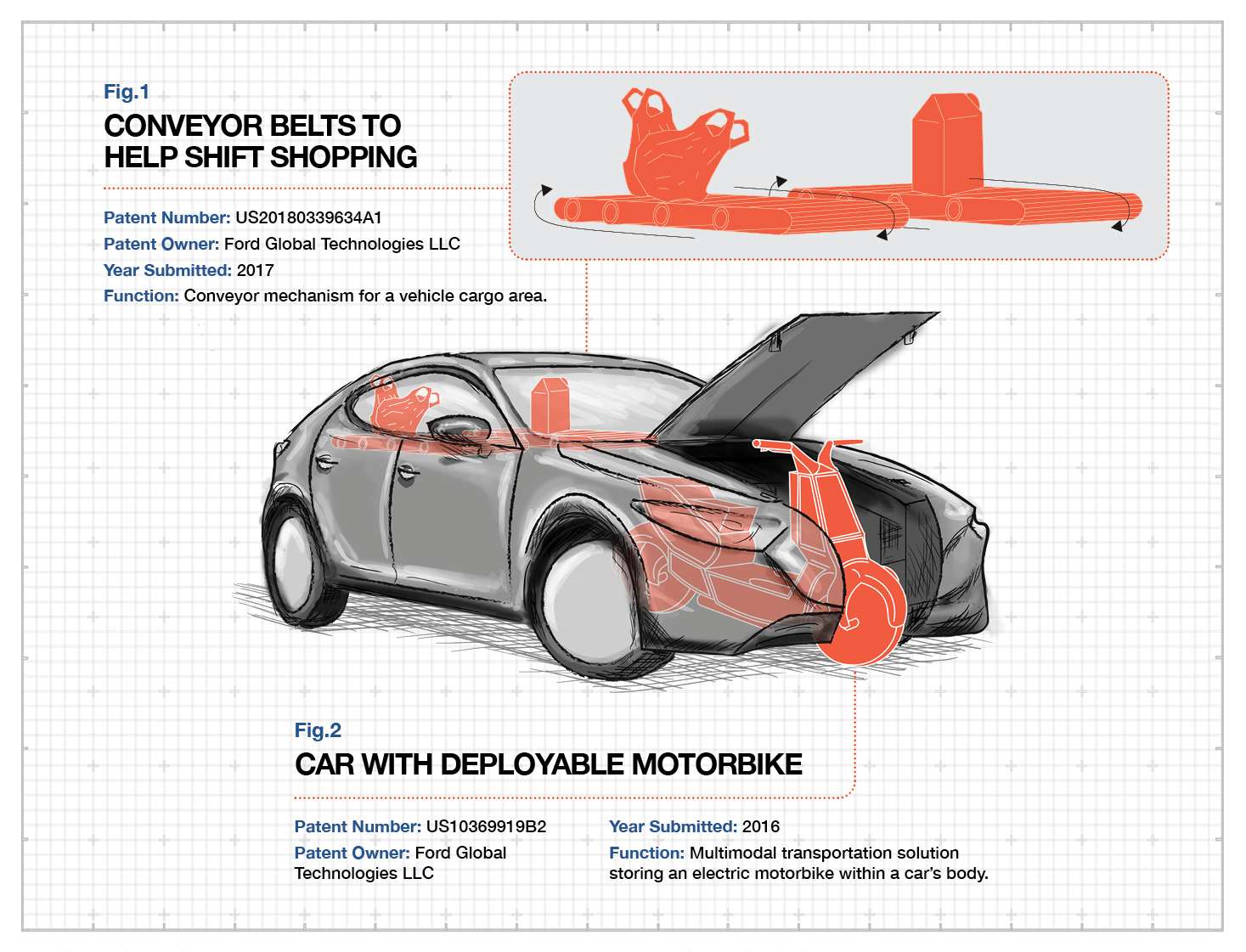 ● Car with Deployable Motorbike: Can't decide between a motorbike or a car? No problem. Drive like a super-spy with this futuristic combo.

● Conveyor Belts to Help Shift Shopping: Why reach all the way into the back of your car for that last shopping bag when you could have a conveyor belt bring it straight to you? 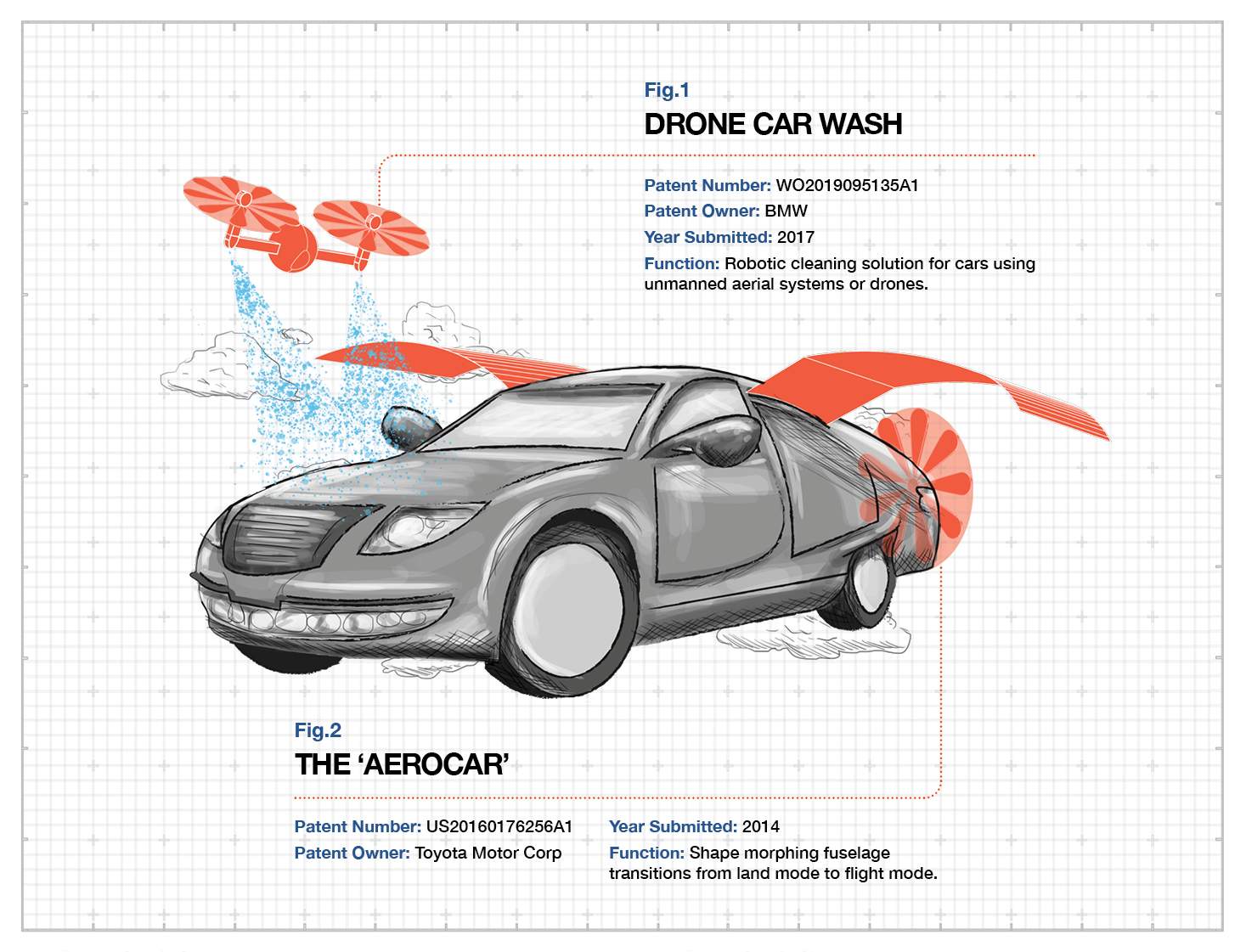 The weirdest aerial car and robotics patents include:

● The 'Aerocar': Sleek, stylish flying cars have always been a staple of sci-fi, this concept decided that slapping a propeller on the back of an existing motor was good enough.

● Drone Car Wash: Introducing autonomous vehicle cleaning via drone, sit back and let robots do the hard work for you. 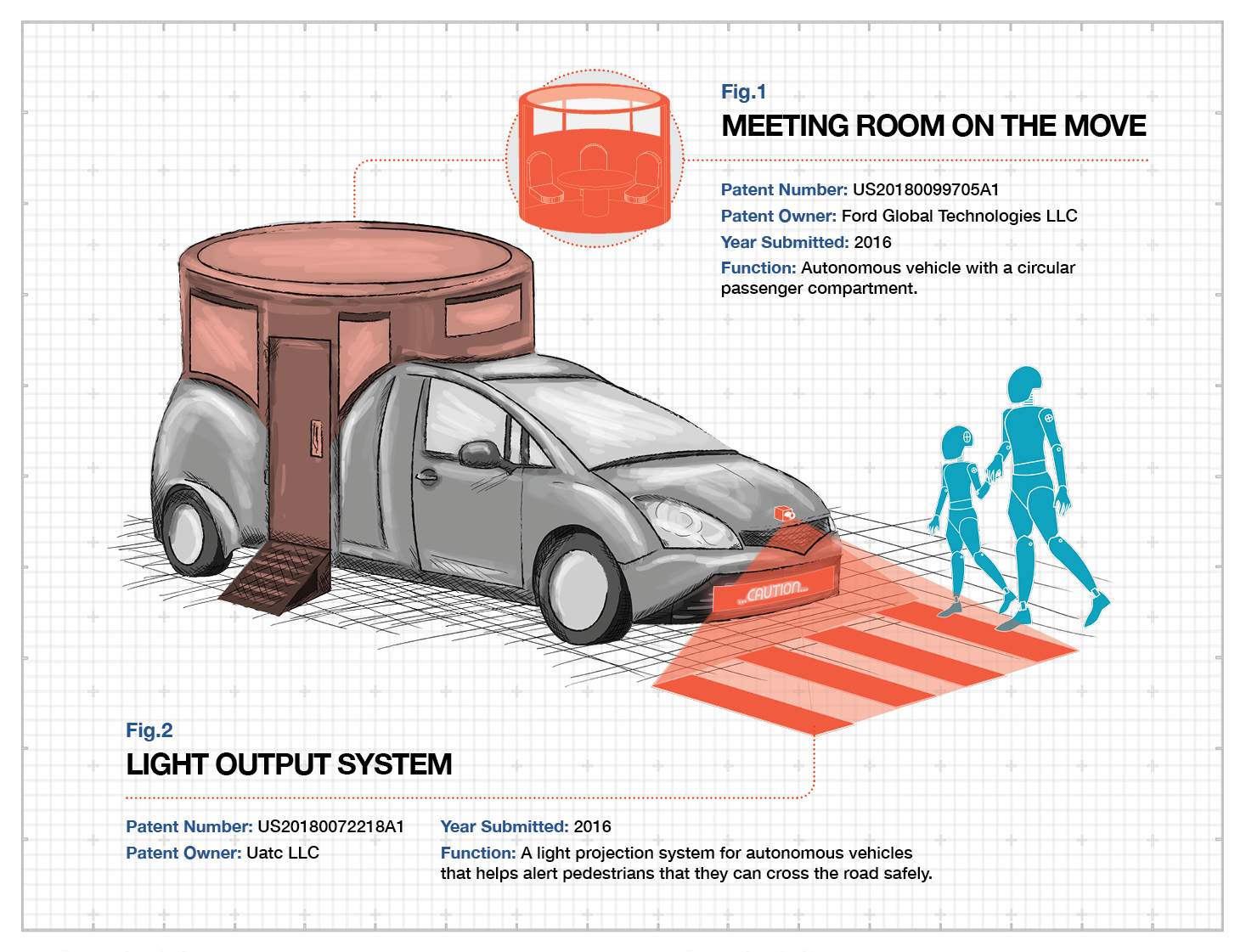 The weirdest autonomous car patents include:

● Meeting Room on the Move: For the businessperson on the go, this pod style vehicle design autonomously ferries you and your fellow meeting attendees to wherever you need to be while allowing you to seal that important deal in transit.

● Mounted Light-up Signs: Intended to show the intention of an autonomous vehicle to pedestrians, this concept would leave cars looking more like light-up billboards than vehicles. 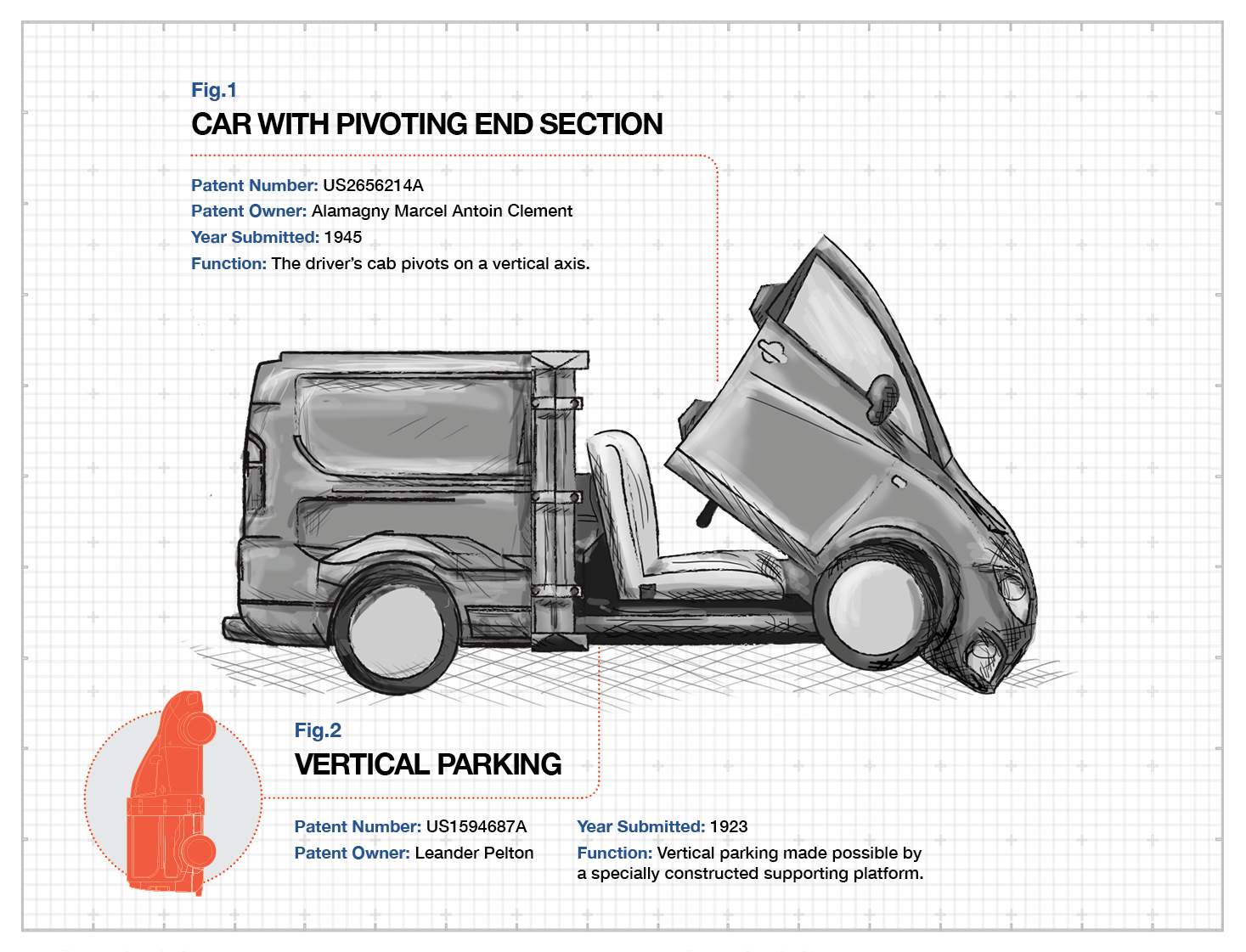 The weirdest car patents from the earlier years of automotive tech include:

●        Car with Pivoting End Section: Standard doors? How boring. Gull-wings? Not flashy enough. This concept has the whole front section of the car raise up to help you get in and out. It would certainly turn a few heads.

●        Vertical Parking: What if your car could park on its back? That's pretty much it for this idea which seems like a rather extreme response to a lack of parking space – especially given that this patent was originally filed in 1923.

7. In-Car Coffee And An On-The-Go Toilet 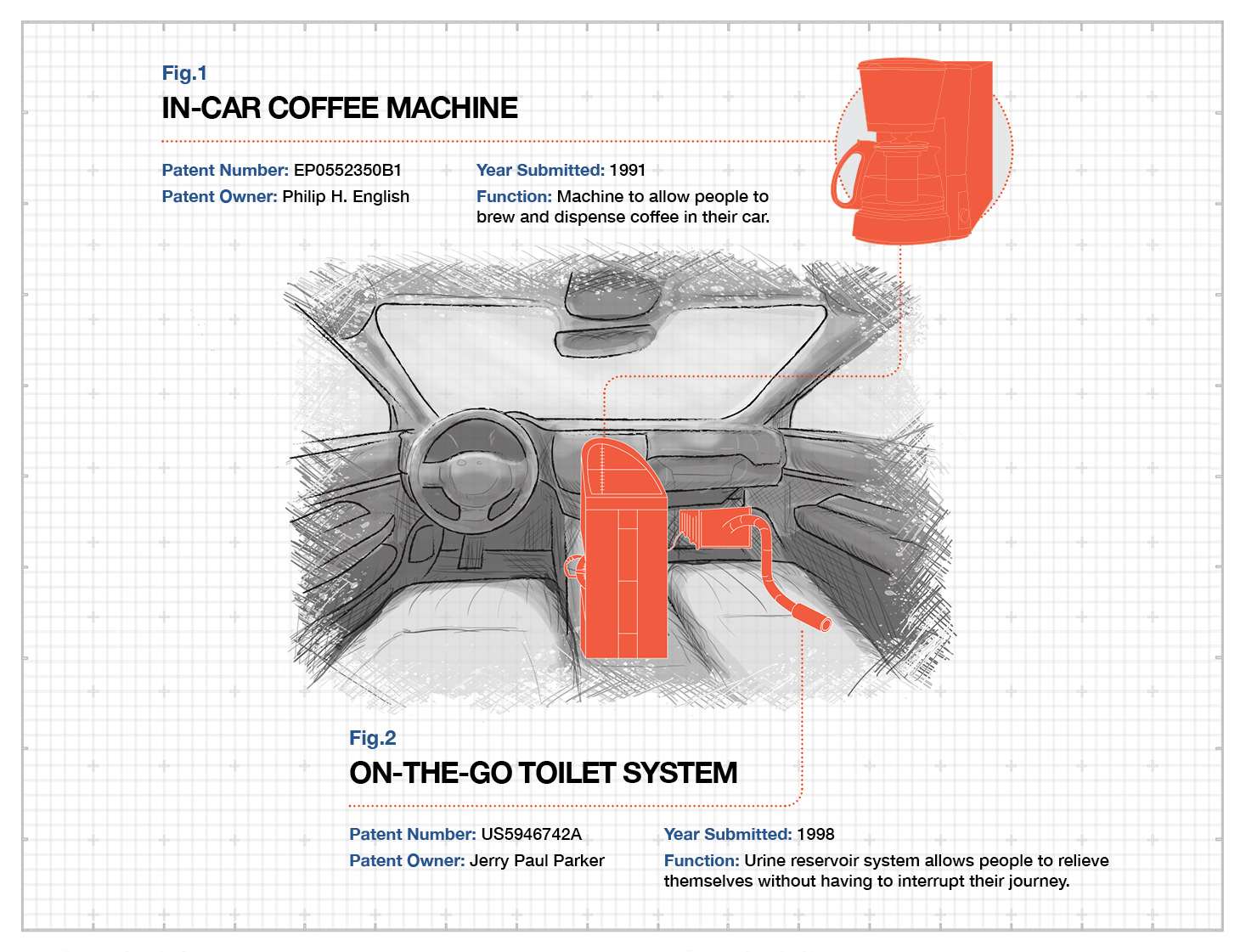 The weirdest car patents for in-car amenities include:

● In-Car Coffee Machine: A nice, strong cup of coffee may be good for keeping you alert on the road but it's probably not a good idea to brew and pour it while driving.

● On-The-Go Toilet System: When you've got to go, you've got to go. Although it may actually be more comfortable to hold it until the next service station than to use this in-vehicle 'reservoir'. 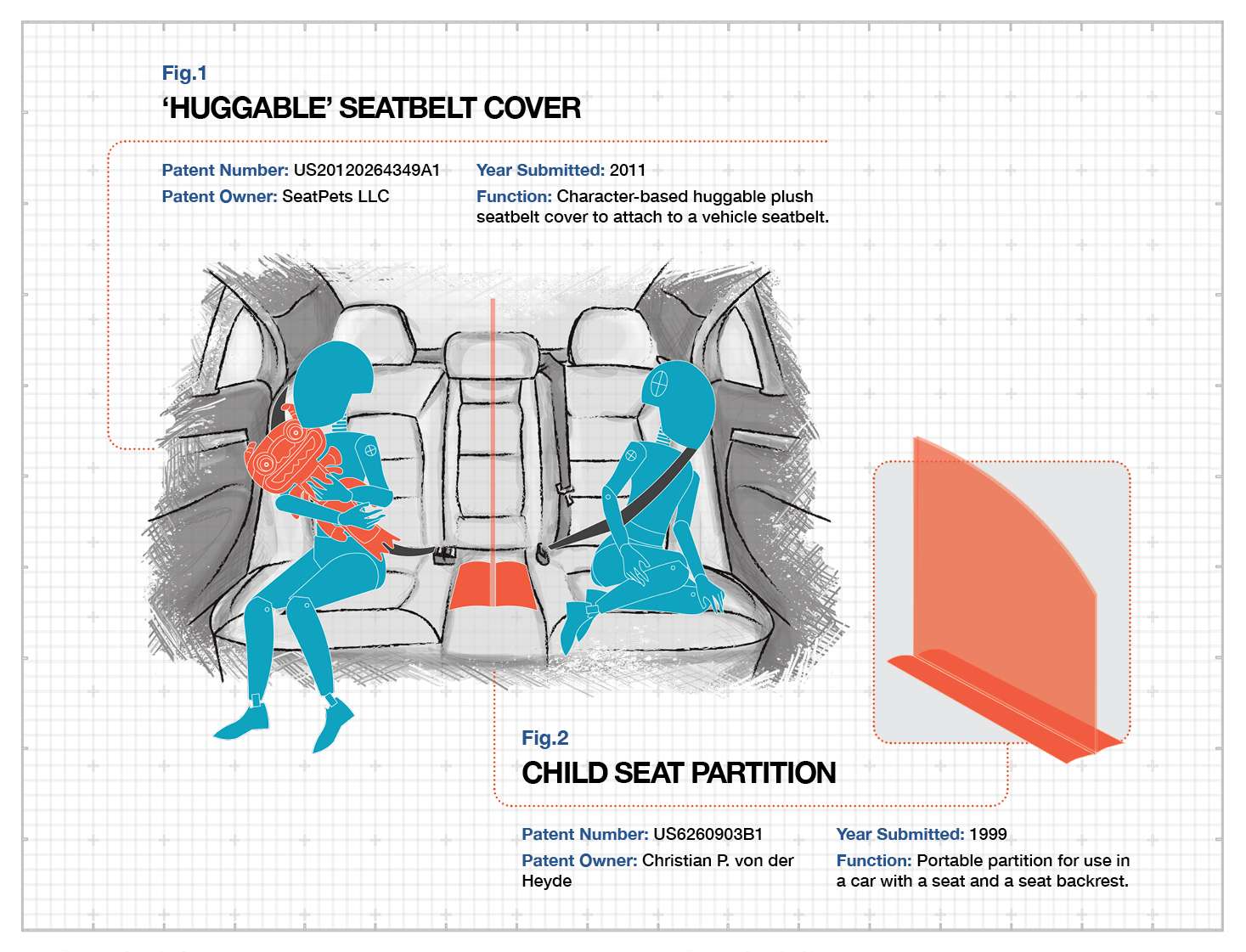 Now that we've seen what would happen if the strangest patents were actually implemented into today's vehicles, who is it that's dreaming up these wild concepts?

With advancing tech playing a huge role in the automotive industry, it's no surprise that there's a patent arms race underway between some of the biggest hitters in the sector. We've put together a top 10 list of which car companies are filing the most patents.

Toyota and Ford have a solid lead over the competition, implying that they're prioritising innovation in their products. However, as we've seen, just because you're able to file a patent doesn't mean that it's going to make it to market – and if some of the ones we've covered did, our roads would be a much weirder place.

While you're here, don't forget to check out our latest Tesla Model 3 leasing offers as well as all of our car leasing deals.