It's hard to focus on footballing achievement right now given the backdrop of so much uncertainty on what's happening with the National League and its clubs. I want to wait for the upcoming resolutions before giving my opinion on the matter.

One thing I would like to say is I'm glad that the National League will be providing regular COVID testing to all players. Maybe they read my blog on player safety and testing a few weeks ago!

The real shame at the moment is the incredible moments and stories on the pitch that don't get the attention they deserve. I love this level of football and non-league as a whole. It's been an incredibly difficult time for everyone as we've faced these unprecedented times. All I'll say for now is I sincerely hope the National League, The FA and the Government can sort this mess out.

For now, I want to highlight some of the positive stories happening in football. Well, not so positive if you're a fan of any National League club that have faced Hornchurch FC this season.

The Romance Of The Cup

I know you're probably thinking "leave it our Jeff, we're suffering enough" – I hear you! But you can't not admire the run little old Hornchurch FC of the Isthmian League are on in the FA Trophy.

In this season's FA Trophy run which is now at the quarter-final stage, Hornchurch have beaten no fewer than three NL South teams and one 5th tier side in Kings Lynn and they now threaten NL North Darlington for a place in the last 4 on the 27th of February.

It seems ridiculous to imagine a side from outside the top two tiers of the National League system getting anywhere near Wembley, but their manager, ex-Newcastle and Spurs player Mark Stimson has good cause for optimism.

In 2001 he won the trophy coming to the end of his playing days at Canvey island. Then in his first role in management he steered Grays Athletic to winning it not just once in 2005 but in consecutive seasons when he succeeded again in 2006.

Stimson then left Grays to take on the managerial role at Stevenage Borough, but he just couldn't leave Wembley alone and created FA Trophy history by winning it three years in a row lifting the trophy again in his first season in charge.

You can leave the romanticising about special relationships between managers and particular silverware to one side because for me, the staggering achievement goes up a notch when you consider their step 3 season ended in October!

Literally their last 5 games of football have been solely played in the FA Trophy and spread over the last 2 months. How has fitness not played a part? What do this side have that their loftier opponents - Tonbridge Angels, Dulwich Hamlet, Kings Lynn and Maidstone United couldn't overcome? 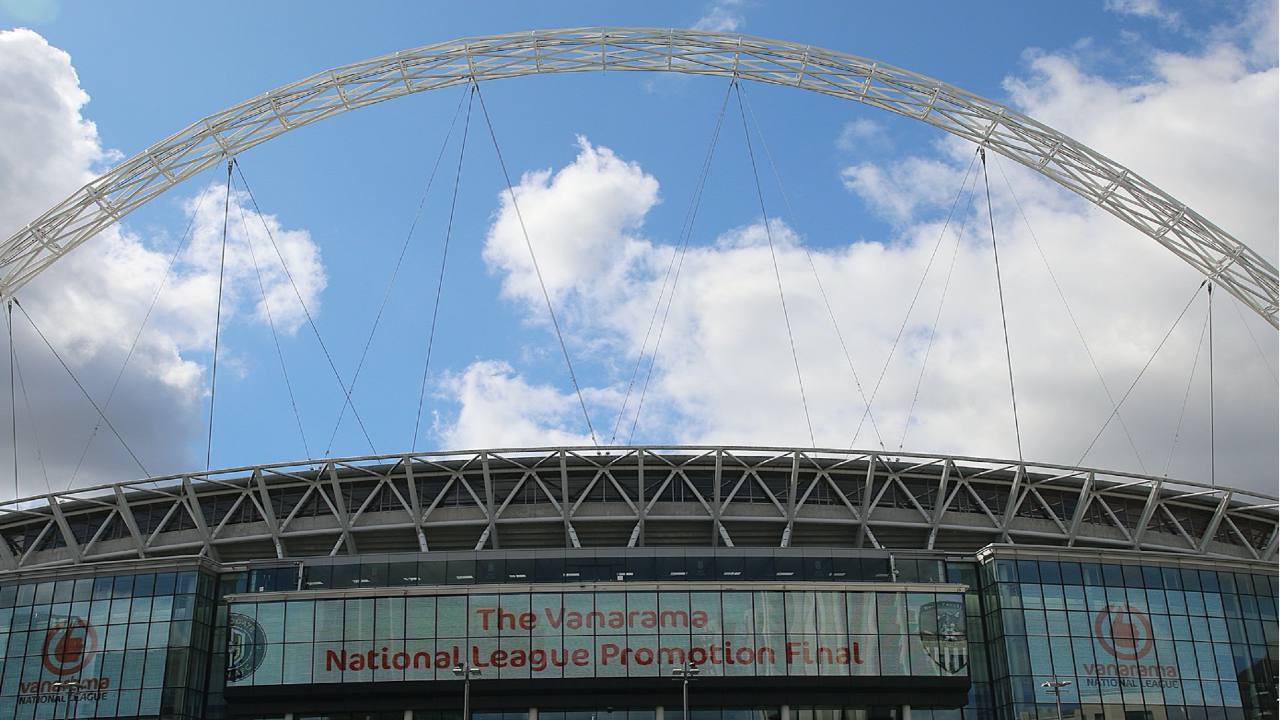 A Bright Future Ahead

I reported on the King's Lynn game live for BT Sports Score. I'd chosen the game because we had the lowest ranked side against a 5th tier Vanarama side, and I felt given the Linnets league form it had the potential for an upset. Going into the game Hornchurch had lost two of their key players and they could only name 4 substitutes.

Speaking to club Chairman Alex Sharp you realised that in order to see out that Trophy run the club were having to obviously continue to pay the players without any income but for the winnings they've accumulated from each round. It should be noted that their success has come at a high price as their budget for this season was pretty good for their level. They had earmarked this season of all seasons to have a real push towards achieving promotion.

Financing a season that has so much uncertainty is a unique scenario that echoes elsewhere. Mark Stimson had told me that when their league season was confirmed null and void several of his players had been approached by clubs in the National League South but had pledged to keep their suitors waiting until their trophy run was over.

It's clear this team have talent and with each trophy game the Hornchurch players have played they've fought not only to keep the season going but also to keep the group together. Let's hope the club are well compensated if/when some of their star players move up to the National League.

The tie against King's Lynn in January ended in a penalty shoot-out after a 1-1 draw. In the game Hornchurch were far from riding their luck. Urchin's goalkeeper Joe Wright heroically saved all 3 of King's Lynn's first 3 spot-kicks and it was all over, a win that earned them another home tie this time against Maidstone Utd which they played out last Saturday.

It's very rare in my work that I follow the same team two rounds in a row but I had a feeling I should venture down once more to The Bridge. An epic 5-4 Hornchurch victory proved me right! An absolutely stunning game of football from exactly the same starting XI from the game before, probably the only starting XI they have! It's funny how sometimes games can have a certain pattern and on this occasion all goals were quickly followed by equalisers except of course for the last.

The Hornchurch performance was also notable in that when they went behind, they didn't panic and on the four times they went ahead they managed to keep their cool too, almost trusting that if they kept to the game plan it would all fall in to place. There was of course an exception to Hornchurch's stoic attitude, Liam Nash's 90th minute winner which sent the players into wild celebrations on what seemed like another unlikely but thoroughly deserved victory.

I asked Stimson if they had played a friendly or two to build their fitness but he said he hadn't dared to in case anyone got injured! They had on this occasion received special dispensation from the FA to train in the week leading up to the game, something they had been denied until two or three evenings before the King's Lynn game (which makes that victory all the more remarkable!).

Bad news followed for the rest of the Isthmian Premier; the Chairman assured me after the Maidstone win that he would be doing everything in his power to keep the squad together for next season building on what is already an amazing achievement getting so far amongst some of non-league's finest.

How Far Can They Go?

How far can they go? They travel to Darlington at the end of the month for a place in the FA Trophy semi-final. Their opponents might be languishing at the wrong end of the National League North but they've beaten 5th tier opponents Wealdstone and Weymouth to get this far so you wouldn't feel the Quakers will exactly be quaking in their boots, but maybe they should!

Interestingly, Darlington made a statement on the 3rd of Feb (before the Wealdstone victory) confirming they had voted for the season to be declared null and void. The Hornchurch game is on the 27th just a day before the deadline for all clubs to respond to the National League's resolutions, I wonder what the club feels about carrying on as long as their trophy run goes on for? Food for thought.

Politics aside though, Darlington won the Trophy exactly a decade ago under Mark Cooper so they've got pedigree, but not as much as Mark Stimson. Nobody has.