Electric Van Payloads – All You Need To Know

Not everyone is worried about the amount of weight they can carry in their van. Let’s face it, if you’re carrying large amounts of foam furniture filling, or perhaps delivering polystyrene packaging materials, volume is going to be much more important. But if you do need to carry some seriously heavy loads and you’re looking to move over to a fully electric van, what do you need to watch out for? Here, Vanarama’s Tom Roberts takes a deep dive into the subject of electric van payloads...

The Boring (But Important) Bit

Let’s start with some basic maths. Working out how much weight a van can carry is relatively simple. All vehicles (this actually includes cars too) have a GVM stamped somewhere on the chassis plate – that stands for Gross Vehicle Mass, it’s the maximum permissible weight of the van with everything on board, including passengers, loads, fuel, even your bottle of coke and lunch box. The whole lot. So, all you have to do is deduct what your van weighs without a load on from the GVM, and that’s what you’ve got to play with. Simple (although axles have their own maximum weights too but, let’s not complicate things right now...)

Here’s an example. Your van has a GVM of 3500kgs. It has an unladen weight of 2250kgs (you can get this from the manufacturers literature, they sometimes call it kerbside weight). That difference of 1250kgs is your maximum payload.

How Are Electric Vans Different?

The simple answer is that generally speaking they can weigh more, so, if you were paying attention to the maths lesson, you’ll realise that this means that they might carry less. This extra weight is mostly down to the batteries. Powering a van weighing up to 3.5 tonnes at motorway speeds for 100 miles takes a huge amount of energy, and there’s only one place to store it – in a battery pack, usually located underneath the van. These batteries are really heavy and, although your electric van doesn’t have an engine, conventional gearbox or a fuel tank containing 80 litres of diesel, it does have an electric motor and transmission which weigh a fair old bit. This means that most electric vans have a higher unladen weight and so can’t, in theory, carry the loads that their diesel equivalents can cope with.

What’s This ‘In Theory’ Thing, Then? 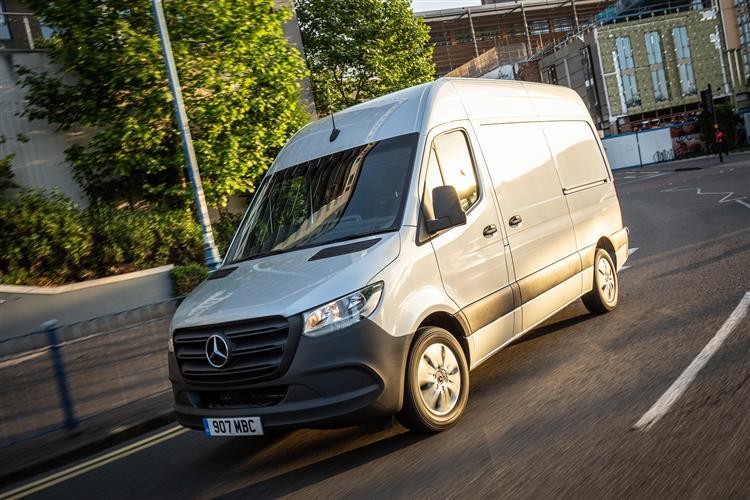 You’ve probably heard that, by 2030 all new vans will need to be electrically powered. This is all well and good, but, those who operate vans at 3500kg GVM to enable them to carry the maximum payload possible (over 1500kgs on some vans) are understandably concerned that an electric van won’t offer a capacity anywhere near as high. Take the Mercedes-Benz E-Sprinter for example, it can only carry 731kgs despite having a GVM of 3500kgs.

Although quite a few manufacturers offer their diesel vans at weights higher than 3500kg GVM (typically 4250kg or 5000kg), the vast majority of operators avoid them like the plague. Why? Because these are no longer light goods vehicles, the regulations covering them are closer to those in effect for HGV's. Here, we’re talking goods vehicle operator’s licences, tachographs recording driver’s hours, and additional driver licensing requirements for starters. OK maybe if you already run trucks, but for the conventional van owner, it’s territory you really won’t want to cross into.

After lobbying from some industry bodies, in 2018 the Government introduced a dispensation for electric van operators. A goods vehicle, powered by electricity, natural gas, biogas or hydrogen with a GVM of up to 4250kgs can now be driven on a standard, category B driving licence. There’s a full official guide here, but here are the key points. The driver will need to complete 5 hours of training from a registered instructor, he or she won’t be allowed to tow a trailer and the dispensation is only effective within Great Britain, and not Northern Ireland. The good news isn’t restricted to driver licensing, there’s no requirement for an operator’s licence, and the drivers hours rules (including a requirement for a tachograph) will, under most circumstances not apply. The van would however fall under the goods vehicle annual testing (MOT) scheme which differs from the ‘normal’ van testing legislation. If this dispensation looks like something that might work for you, take some time to read the official guide which goes into full detail.

It’s easy to see how this works in practice – take the new Ford E-Transit for example. It’s got a huge payload of 1758kg at the higher, 4250kg GVM option...

Do Electric Vans Have A Lower Payload Than The Diesel Version?

No, especially at the lighter end. Why? Generally speaking the battery packs are smaller and weigh less. Less weight = more payload capacity. The best-selling electric van is the Vauxhall Vivaro-e (also available under the Peugeot, Citroen, Fiat and Toyota brands). Depending on which model you choose, it has a payload of up to 1226kgs. The highest capacity diesel Vivaro offers 1458kg of capacity, just a 232kg penalty for the fully electric van.

Will I Get Those Official Ranges If I’m Loaded To The Max?

Those official, WLTP tests are carried out under controlled, ideal conditions and with an unladen vehicle. Just as with a diesel powered van, as soon as you make it work harder by putting a load in, energy consumption will increase. When you plant your foot firmly to the floor to maintain a decent speed up a motorway incline in your van carrying 4 heavy pallets, that power doesn’t come for free. You’d expect your diesel consumption to increase, and likewise in an electric van the available range will drop.

What About Towing With Electric Vans?

Here’s where things get a little tricky. Whilst, as far as we are aware almost all diesel vans on the market today have a decent, useable towing capacity, the same can’t be said for electric vans. In fact, whereas some are approved for towing a light trailer, others are not permitted to tow at all.

This is because all vehicles have to be approved by the manufacturer, in the UK’s case to the Vehicle Certification Agency in a process called Type Approval. This includes, amongst other things the type of use the van is designed and approved for. The main reason cited that towing isn’t always permitted is because of the drastic effect pulling a 1500kg (or heavier) trailer would have on the range of the van between charges. Manufacturers are keen to promote the benefits of EV’s, and any negative publicity of ranges being reduced to an impractical level wouldn’t do the industry much good. Another potential reason is that the additional weight could, overload the electrical system of the van.

We’ve taken a look at some of the latest information available from electric van manufacturers, and here’s a summary of the vans that can, and cannot tow a trailer. It’s not an exhaustive list, and we’ve not included vans where the data isn’t clear, or is unavailable. Don’t forget that things can change, and this information is only correct at the time of writing. All weights relate to a braked trailer.

Can My Electric Van Be Used For Towing?

So, there you go. If you need to carry plenty of weight, all is definitely not lost when it comes to electric vans. With the licence dispensation on heavier vans, and the competitive payloads at the lighter end, moving to a fully electric van shouldn’t be an issue for even the most demanding van user.

Why not head over to the Vanarama electric van leasing page for the very best deals on leasing a new electric van?